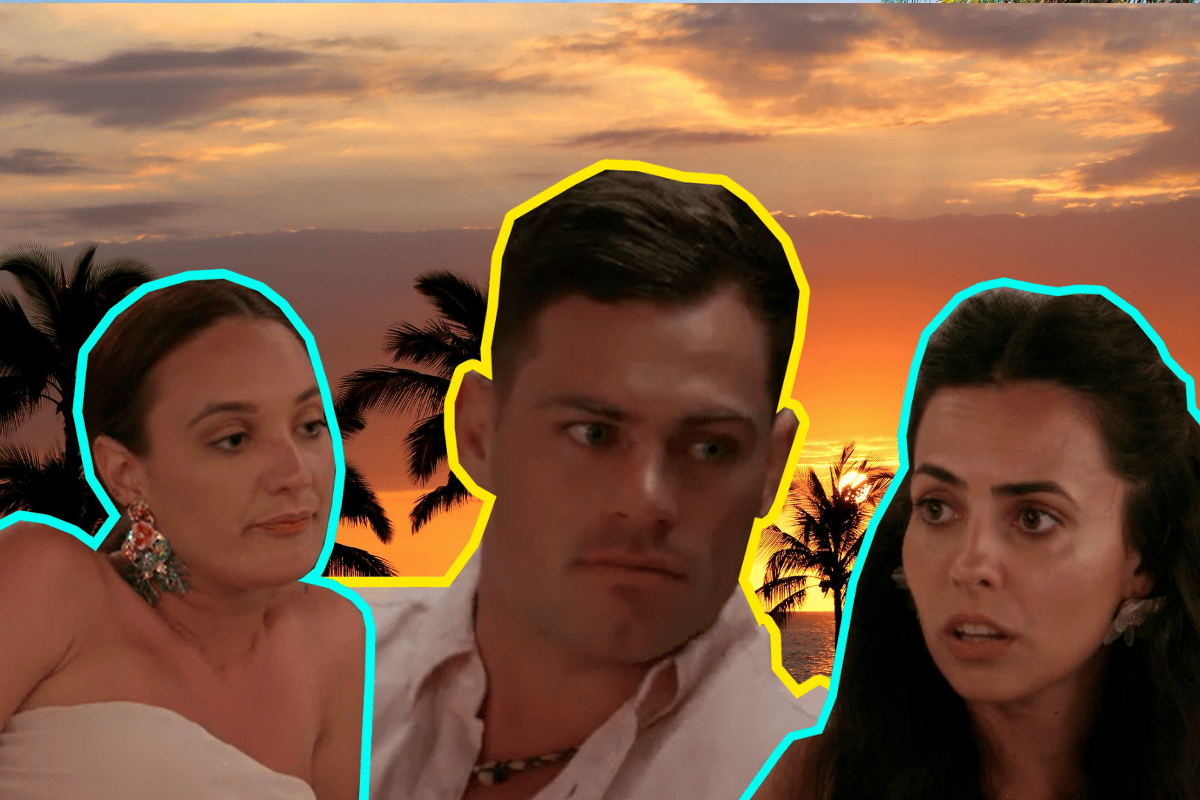 We pick up right where we left off, and conga Brittney is having a 'lil bit of a meltdown because she doesn't want to go on a date with Niranga.

Meanwhile, Niranga (bless him), is telling the producers that he's looking forward to getting to know conga Brittney when Renee suddenly appears and drags him away to a rogue white van for a chat. 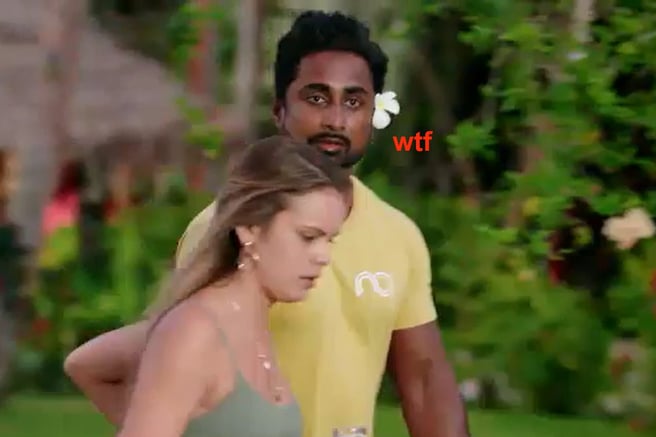 Can you not interrupt my screen time, pls? 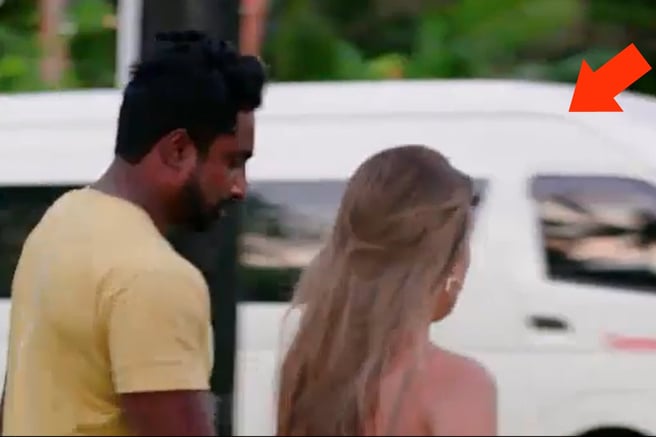 Where are they going pls.

She tells him that conga Brittney doesn't want to go on the date with him, and Niranga decides to confront her in her room.

Elsewhere in Paradise, Jamie is trying to convince Cass to give him a friendship rose and, uh, it isn't going down well.

Cass explains that her rose is probably going to Jackson instead, and Jamie becomes... emotional.

It's uncomfortable for all of us, but mostly for Cass who spends most of the interaction awkwardly staring into the distance.

After chatting with conga Brittney about their date, Niranga arrives and asks Cass to come on a friendship (?) date with him instead. (Yep, Jake is definitely shaking his fist somewhere in the distance right now).

On their date, Niranga and Cass are taking part in a fire dancing tutorial when Cass begins to recreate that one ~sexy pottery scene~ from Ghost with one of the Fijian men. 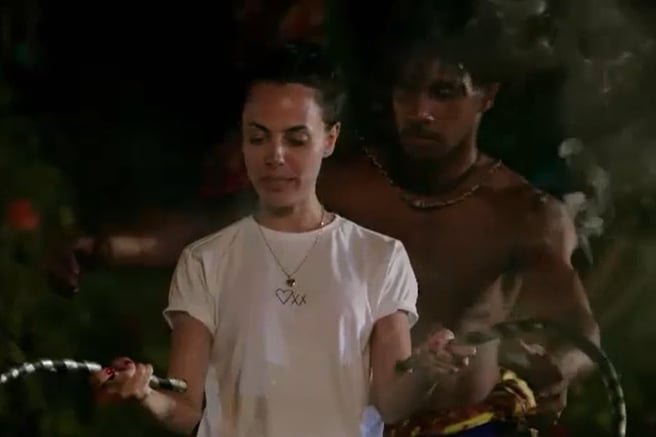 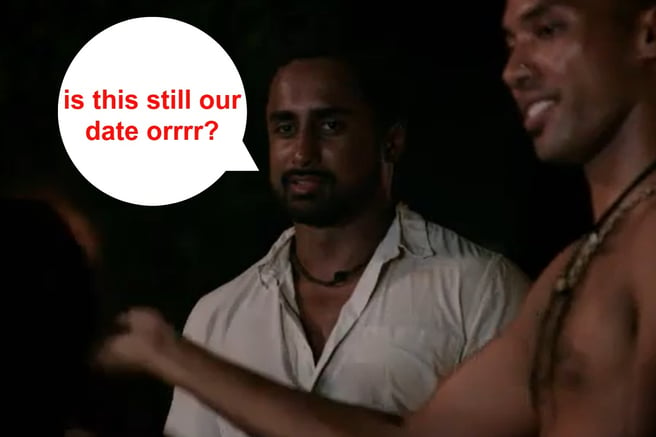 After remembering that she's actually on a date with Niranga and not the rogue fire twirler, the pair sit down for a chat.

Niranga tells her that he's actually had feelings for her from the start, and that tonight is "the night to explore" their potential relationship.

After Cass maintains that Niranga is still very much in the friend zone, they begin arguing about "respect" and "foot rubs". ¯\_(ツ)_/¯

WE WAITED SO LONG FOR A NIRANGA STORYLINE.

AND THIS IS WHAT WE GET?

It's the next morning and conga Brittney's mood has changed dramatically after sharing a kiss (and a bed) with Jackson overnight.

Is that... another new arrival?

After reuniting with Brittany H, Timm is practically tackled to the ground by ~da boiz~.

"When I see Timm, I feel like I'm home," Jamie professes.

"This is the best day of my life."

Once he's settled in, Timm and the new arrivals go for a chat, and Matt admits that he's been spending time with Ciarran's ex Renee.

Timm is all like THAT'S F*CKED BRO, YOU'RE A DOG BRO and mate... calm down. 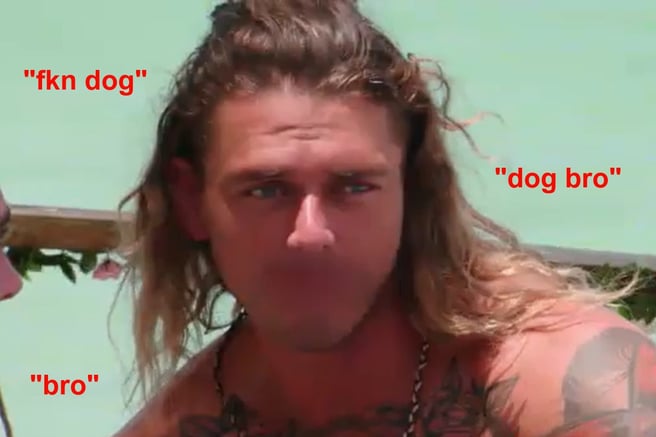 After saying "bro" and "dog" at least 23 more times, Timm tells Ciarran that he's "never saying a word to that dog" again.

"You went to his house. You stayed with him. That made me sick in the guts, bro," he tells him.

Ahem. We didn't hear you calling anyone a "dog" when Ciarran did the same thing with Renee's friend Jess, but okay.

Later on, Ciarran gives Kiki a "sensual" massage... while everyone else watches on.

"Knead the dough, babe," she tells him. 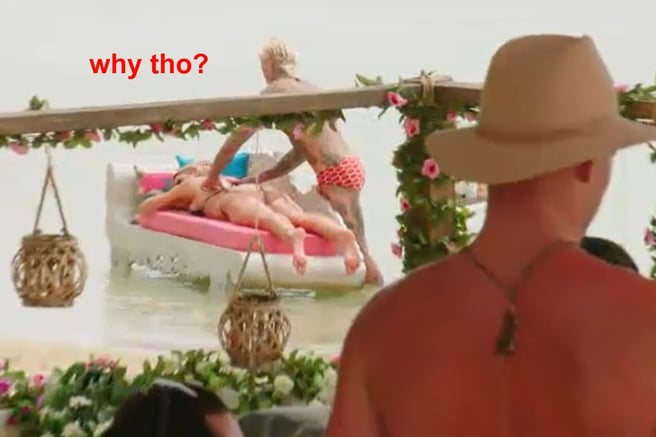 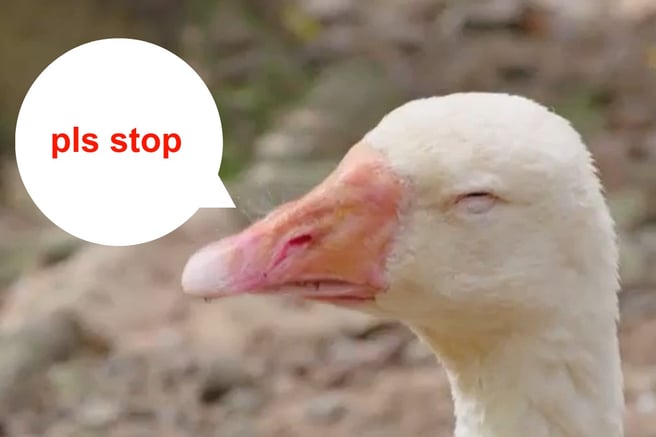 After Jackson shared a kiss with conga Brittney last night, Cass enlists Mary to investigate whether Jackson is committed to her or not.

He tells Mary that he's not fully committed to either of them, and Cass decides to give her rose to him to "show her intentions".

Later on, however, she seemingly changes her mind.

"I'm definitely not giving my rose to Scot," Cass tells producers seconds later and wait, what?

Greg Glenn has taken Alisha on a date... and it involves another god damn bath. 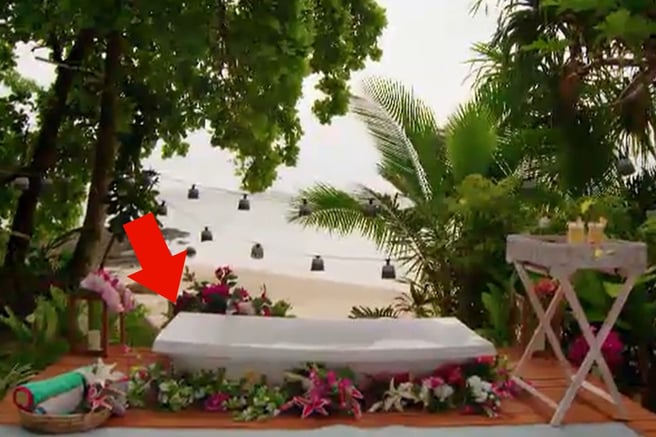 NO. PLEASE GOD NO.

Once again, they're going to spend their date rubbing things all over each other.

They paint each other, while talking about their feelings and... wait a minute.

Is this a man... genuinely talking about his feelings?

WE LOVE TO SEE IT. 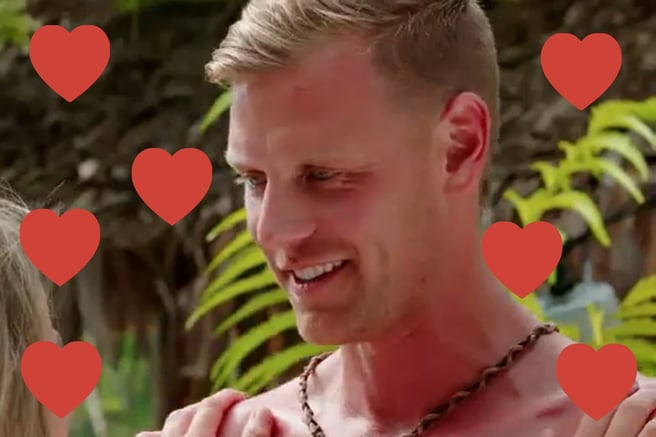 WE LOVE YOU GREG.

Over in Timm and Jamie's room, Jamie is also talking about ~his feelings~.

He tells Timm that Helana was the "only girl he connected with" in Paradise and sweetie, we're sorry, but Helena's gone.

"I never thought I would feel like that about someone," he says, while legitimately crying into his pillow. 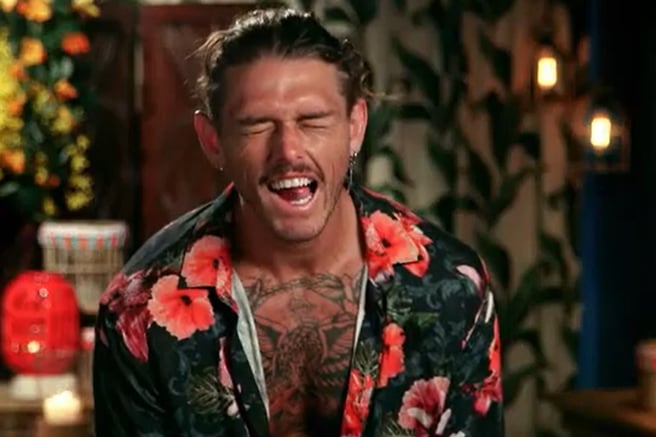 Niranga took her on a date, Jamie attempted to beg her for it, and now an unidentified man is giving her a shoulder massage.

He announces that there will be a rose ceremony tonight, and three men will go home.

The men are beginning to... panic.

Watch the promo for Wednesday night's episode of Bachelor in Paradise below. Post continues after video.

Later on at the cocktail party, Cass makes it clear that her rose isn't as set in stone as we originally thought.

Yep, despite having four other options, Cass still wants to pick Jackson. ¯\_(ツ)_/¯

While Cass is telling the group about her ~options~, conga Brittney takes Jackson away for a chat.

She tells him that she's planning to give him a rose, and Jackson confirms that he thinks their connection is "pretty solid".

WE LOVE THIS FOR HER.

Things are getting emotional.

Niranga is in tears and WHO DID THIS TO HIM??? 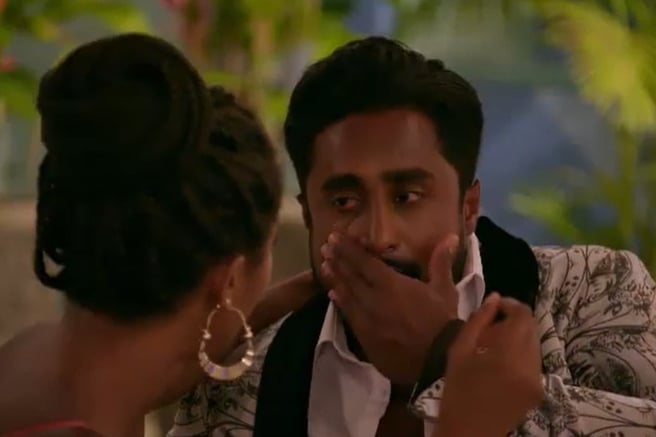 "You're so beautiful, you deserve this," Niranga tells Mary.

"If I could have more than one rose, I would give it to you," she replies.

NO. THIS IS TOO SAD FOR US.

Cass has asked conga Brittney to go for a chat (a.k.a an argument over Jackson).

"What would you do if I picked Jackson?" Cass asks her, and are we still talking about this?

You've known him for 24 hours. Chill.

Look, we all know the real reason you're fighting over him: 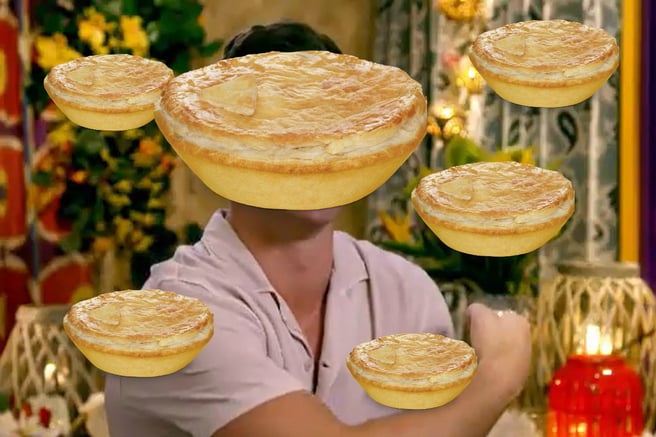 ALL HAIL THE PIE MAN.

Cass then asks conga Brittney who she would pick next if she picked Jackson first.

"I don't understand why this is a conversation I need to have with you," she responds.

Mary's reaction is all of us: 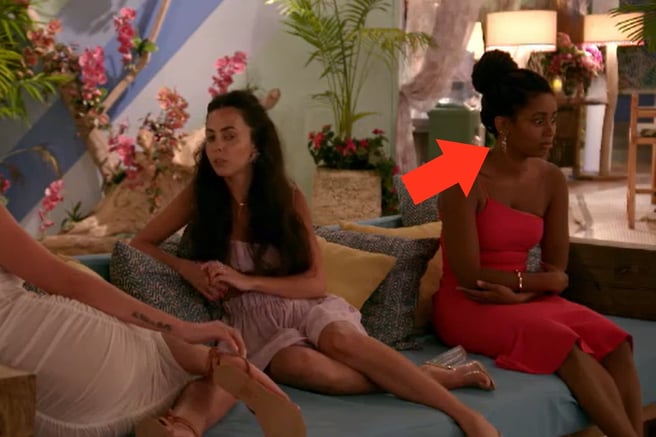 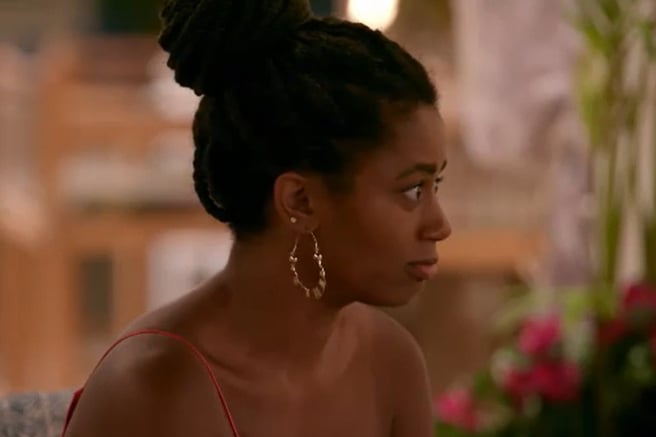 It's time for another rose ceremony

At this point in the rose ceremony, it's all down to the order of Cass and conga Brittney for who will get to choose Jackson... and we all know that Osher is here to start sh*t.

So, just as we expected, Cass gets first pick. And, you guessed it, she picks Jackson. 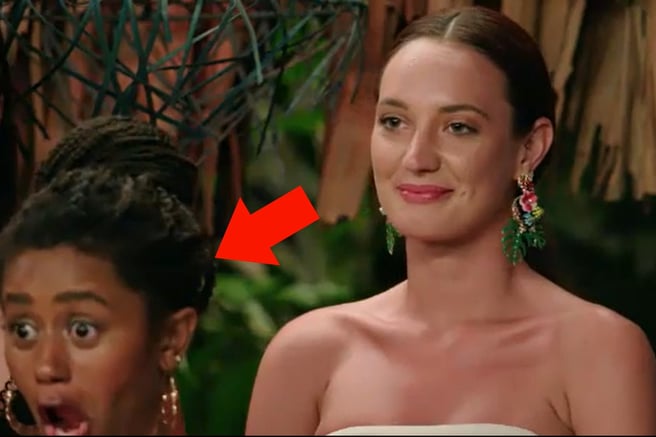 Conga Brittney, on the other hand, picks Scot with one T.

Niranga, Jamie, and an unidentified man are sent home.

But just before he exits, Jamie asks Osher to address the group.

"I had feelings for Helena that I've actually never felt for anyone ever in my life," he tells the group.

"She gave me butterflies every morning when I saw her.

"I'm going to go out there and find my version of Helena and that's what I'm going to take from this experience.

"I just want to pursue Helena. She's the girl for me." 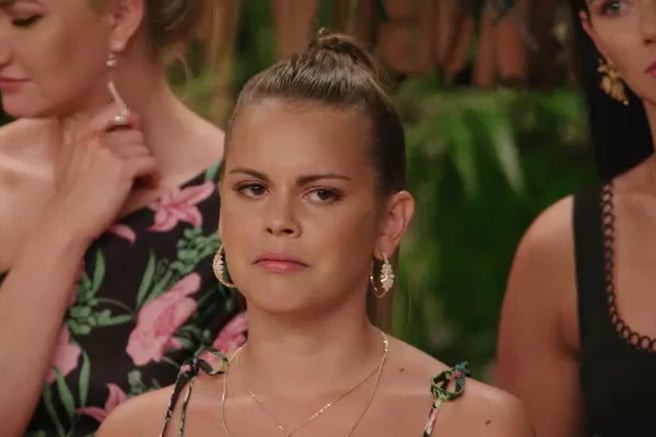 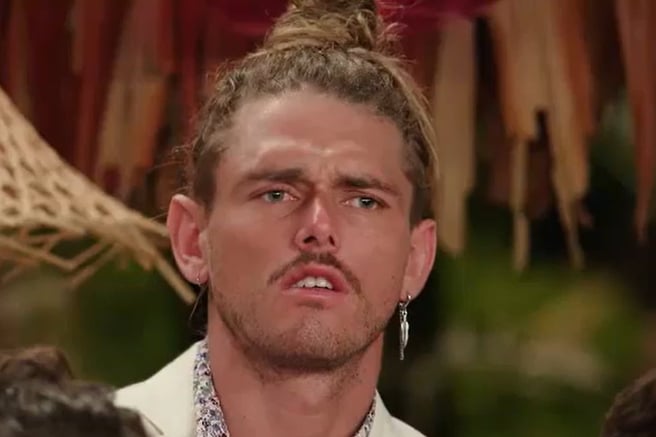 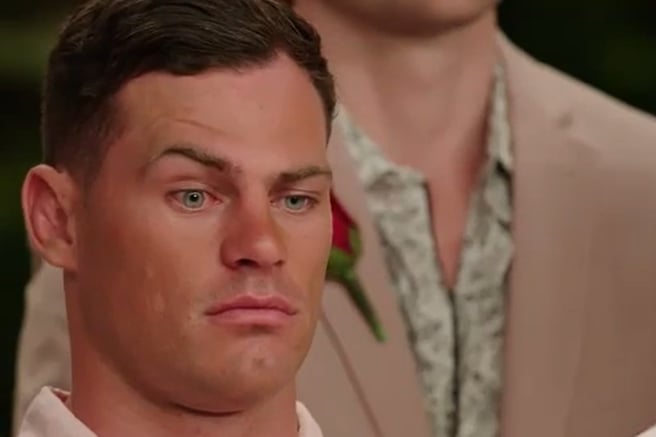 For recaps delivered straight to your inbox, click here and select "Mamamia Recaps" so you don’t miss out on any of the laughs!