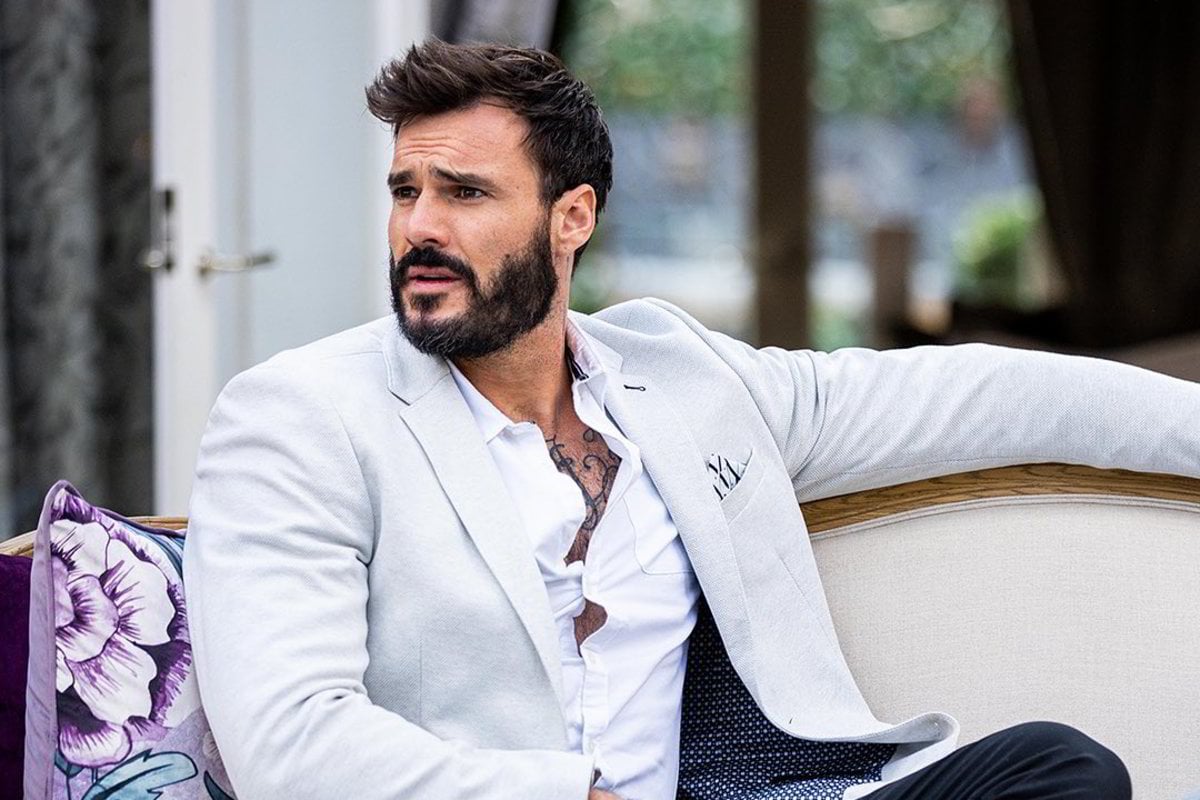 1. Locky finally responds to the rumours he's split from his winner.

Okay. We take back our theories that The Bachelor and his chosen girlfriend have already split.

Locky Gilbert has shut down rumours that he is no longer with Irena whoever wins, and might we say, it is very convincing.

The 31-year-old spoke to TV WEEK this week, assuring fans that he is "110,000 per cent in love" with his girlfriend and he can't wait to share the news with Australia.

"Excited is an understatement," he said.

"I cannot wait. I am beyond excited to be able to finally say it out loud... who I have chosen to spend the rest of my life with... I'm so happy and all I want to do is tell people how great she is."

I wonder if I will have the same smile when I meet my future mother or father in law..... wish me luck. #meetthefamily #imnotnervousyourenervous @thebachelorau

Due to travel restrictions, Locky and the winner haven't been able to see each other much with the final two girls: Irena and Bella both based on the East coast, while he's in Perth.

But, Locky has shared that he is looking forward to seeing her in person.

"It will be amazing [after Thursday] to just be in public together and have a normal relationship. It seems small, but I can't wait to just go for a walk together and grab a coffee.

"I'm over the moon and can't wipe the smile off my face. I couldn't be happier and can't wait to share it with the world."

2. Umm... The Bachelor's Bella has now been linked to another reality TV star.

In case you missed it, The Bachelor front-runner Bella Varelis has been a little sneaky in the past few weeks, opting not to follow production's strict "lay-low" rules.

Thanks to some pap shots and Facebook sleuthing, we know that Bella is living with co-star Bec Cvilikas, and has been spending quite a lot of time with ex-Bachelorette star Nathan Beach.

But now, due to pictures obtained by Woman's Day, it looks like there's a whole new reality star that has been thrown into the mix.

The 25-year-old was spotted getting close to Gogglebox star Jad Nehmetallah earlier this week in Sydney.

"There was definitely some chemistry – she was very happy and laughing at everything he was saying," says one on-looker.

"As they said goodbye he gave her a very tight hug... they seemed to be very close."

Woman's Day also spoke to a close contact of the pair who claimed they may make a good match:

"They have a stack of mutual friends and definitely travel in the same circles," the anonymous source said.

"They're often being invited to the same events, and she is without a doubt Jad's type of woman."

3. Penn Badgley and his wife celebrate the birth of their first baby, after two heartbreaking miscarriages.

Lonely Boy had a baby!

Kirke shared an adorable snap of herself sleeping next to her newborn baby, who’s lovingly wrapped up in a cosy blanket. 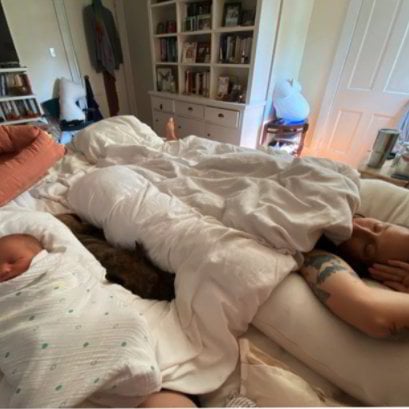 The arrival of their child is particularly poignant as Kirke and Badgley have heartbreakingly suffered two miscarriages. Despite this loss, Kirke showed resilience and optimism when announcing her pregnancy this time around, saying:

“On the road again... pregnancy after loss is a whole other thing. After two miscarriages in a row we were ready to call it. I stopped trusting my body and started to accept the fact that I was done. As a birth attendant, I've seen and heard it all. It takes everything I’ve got to detach lovingly from the losses I've been present for and be in my own experience.”

In the same post, she shared an honest message about her pregnancy and motherhood experience.

“When I was pregnant at 25, I knew nothing. I had no community. I dove in blissfully unaware about birth and its mysteries. Now, with 10 years worth of experience to pull from, I treasure my birth community and the knowledge I have. You're already teaching us how to stay in the day in a way we’ve never had to, little one. Thank you.”

Listen to Mamamia’s podcast ‘This Glorious Mess’, where Holly and Andrew discuss what to say to someone who has lost a baby. Post continues after podcast.

As noted above, this the second child for Domino Kirke who also has a 10-year-old son with her ex-partner and musician Morgan O’Kane.

You may be reading this and thinking, ‘I really recognise Domino’s name’, and with good reason. She’s the sister of both Girls actor Jemima Kirke and Jungle actor Lola Kirke. 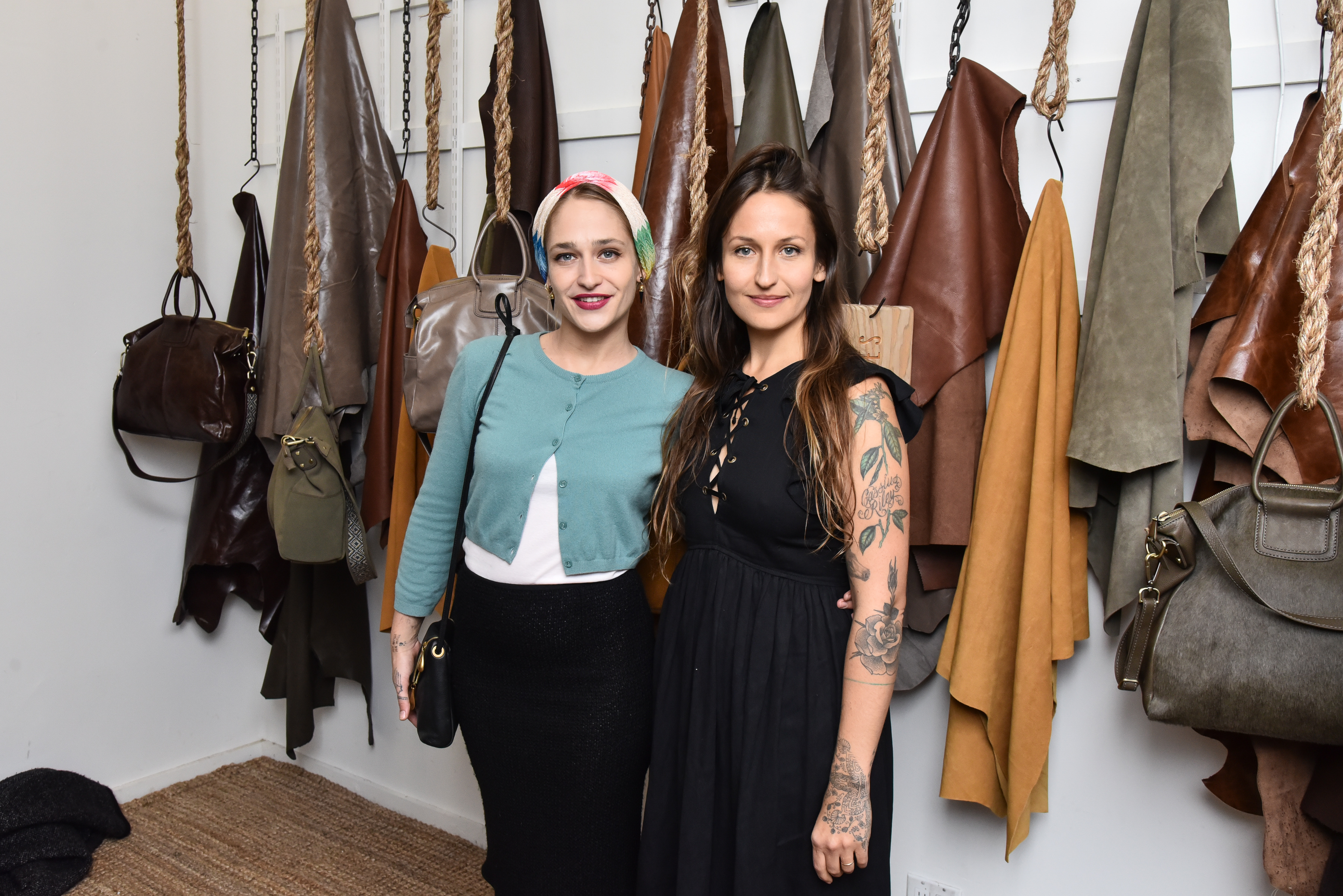 Jemima and Domino Kirke. Image: Getty. A big congratulations to the couple on their gorgeous new arrival!

4. Apparently Bella and Irena’s feud got so bad that they had to be put in separate hotels.

The battle between Bella and Irena has already been going on for longer than we’d hoped, but apparently we’re in for even more feuding on The Bachelor as we roll into finale week.

New reports have surfaced that the beef got so bad between the two Bachelor contestants that they were actually shipped off to different hotels.

An on-set source told the Daily Mail that the front-runners were, “separated by producers into different hotels at the height of the show’s drama”.

Yes folks, that means we are yet to hit the height of this pandemonium.

It seems that the sh*tstorm crescendo comes during hometown visits, which is particularly hard on Irena as the first Bachelor contestant in Aussie history to not have a hometown visit.

Due to Irena’s family being based in Melbourne and filming colliding with the first lockdown of the city, Irena is left without a hometown date.

According to the same Daily Mail source, Irena was feeling especially homesick in the lead up to the finale after being isolated by Bella in the mansion.

"All she wanted was to see her family and she didn't get to. Living in the mansion became so strained with the girls that she wanted to leave desperately," the source explained.

Fingers crossed all this drama doesn’t get in the way of us actually seeing a happily ever after on this season of The Bachelor.

But, TBH, based off all these spoilers, we’re not holding out for much…

5. Everyone is in their... pyjamas: Mamamia recaps The Emmys 2020 'virtual' red carpet.

Despite a global pandemic and the likelihood that half of Hollywood is... infectious, they're trying to pull off a live TV broadcast for TV awards for TV shows and TV actors for our viewing pleasure.

Thank you so much.

But first... there's a red carpet. Not like, physically but... metaphorically.

How does one show off an entire gown/very expensive shoes in a small Zoom frame? What do we think famous people's pyjamas look like?

I feel like all the men will be wearing shirts and ties with no pants, because OF COURSE.

OOH, first we meet the coach from Glee and she's in her guest house. Same. 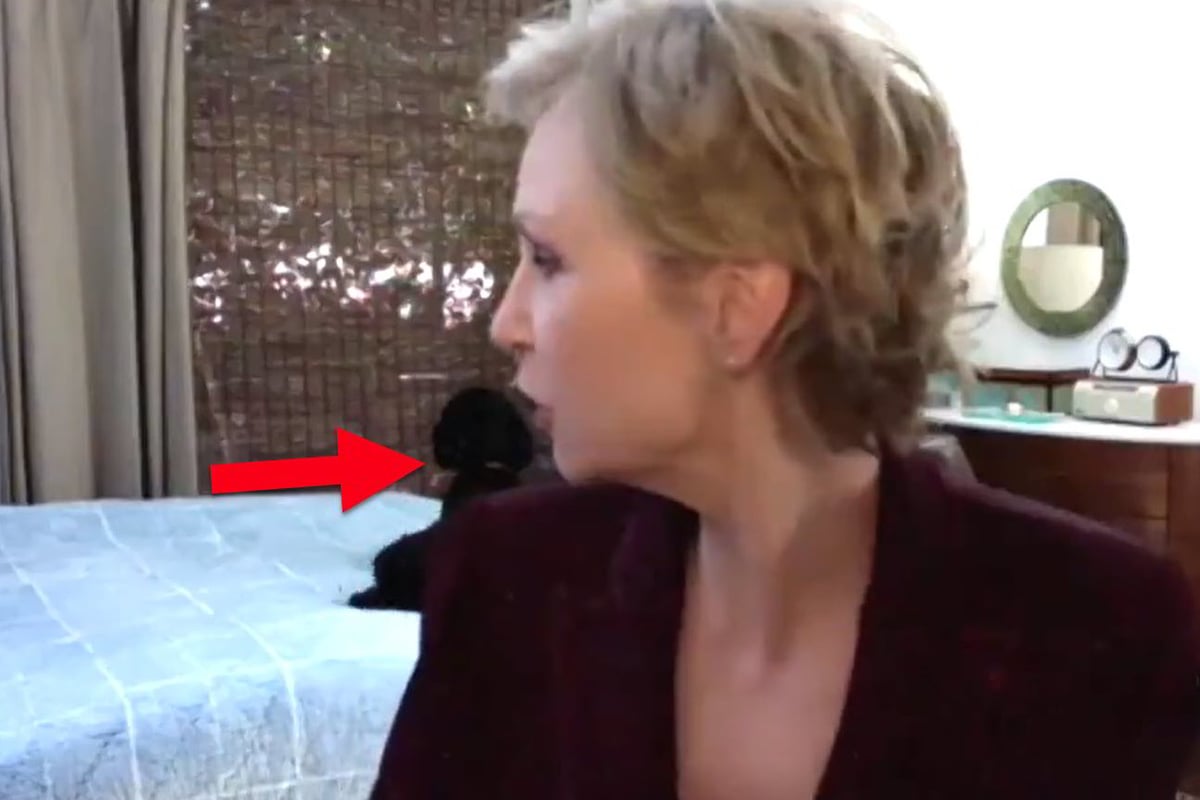 We can tick 'pyjamas' off our Emmys bingo already, because Jane Lynch has PJ pants on and slippers with a very sparkly blazer.

She asks the host where he orders pizza from, 'cause she needs to shake up her order. Like, this really feels like an off-air conversation, but these really are unprecedented times.

You can read the full recap over here.