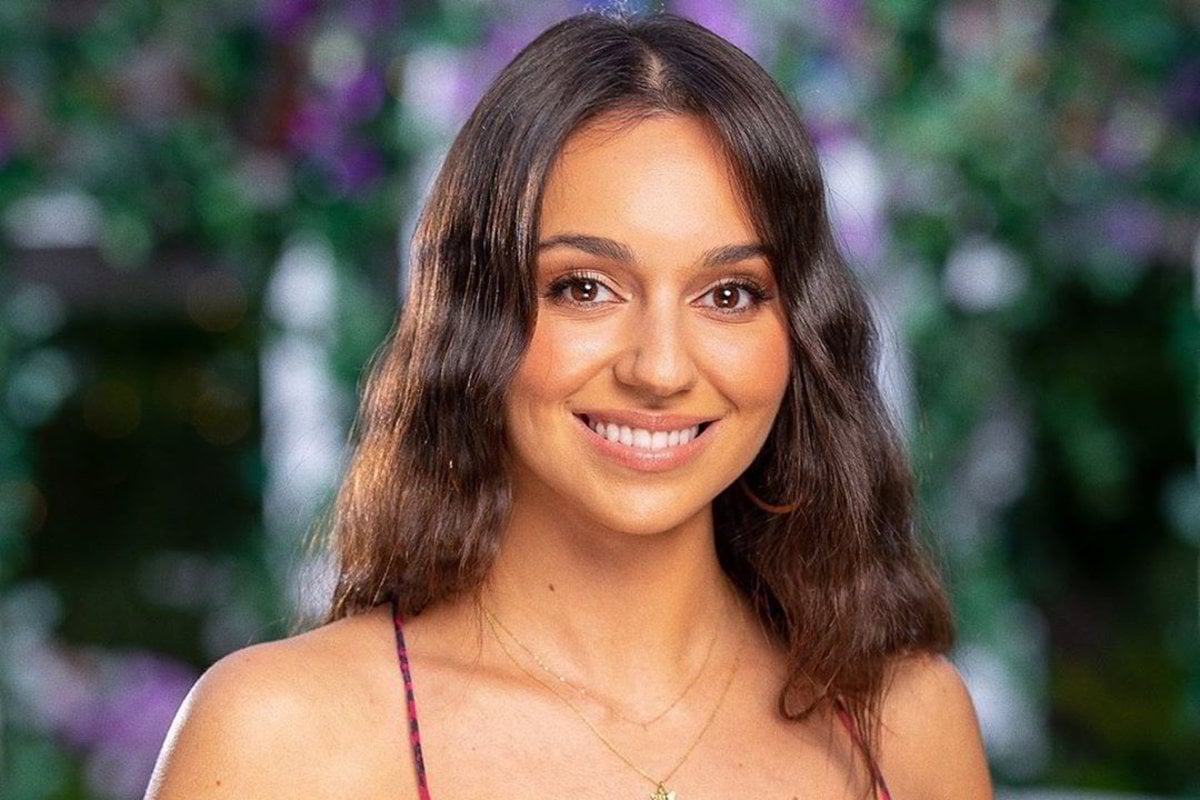 To catch up on all The Bachelor Australia 2020 recaps and gossip, check out Mamamia’s recaps and visit our Bachelor hub page. For recaps delivered straight to your inbox, click here and select "Mamamia Recaps" so you don’t miss out.

This season of The Bachelor has been... intense.

There's been walk-outs, tears, name-calling, COVID-19, oh, and ~the rumours~.

We need to talk about the rumours.

There have been so many it's been hard to keep up at times. One week Bella is the sure winner and next week it's Irena.

But never fear. As we get closer to entering grand finale week, we believe we may have got a handle on what gossip can be trusted.

May we present to you, all the spoilers for this year's season of The Bachelor:

But first, here's what to expect from Locky's season of The Bachelor. Post continues below.

Apparently Bella had a "secret boyfriend" in lockdown.

Apparently Locky wasn't the only one keeping his options open...

According to the So Dramatic podcast, Bella had a secret boyfriend during lockdown: former Bachelorette star, Nathan Favro.

When the girls returned to the mansion following love in lockdown, Bella told the others that her ex, Nathan Favro slid into her DMs, asking her to get back with him.

"Bella told us that he messaged her when she got out the first time. She went home for the COVID break and he was begging her to get back with him," a source said.

"He saw photos of her on the boat during filming and he was telling her he made a mistake and wanted to get back with her.

"She then told the girls she wasn't completely over him, and they had been messaging and meeting up in the filming break."

To add to this theory, photos were leaked this week of Bella and Nathan hanging out at a beach in Sydney.

There will be no final three.

According to the So Dramatic podcast, two women will be eliminated in one night following hometowns.

Yep, that means no final three.

After production was temporarily halted due to the coronavirus pandemic, the reality show was rushed to wrap up the season in two weeks.

"They weren't sure if lockdown would happen again, and they were already running behind due to covid," Megan Pustetto, the host of So Dramatic! explained.

"They needed to wrap up filming as fast as possible so they could start filming The Bachelorette, which is in the same mansion."

So, to speed up the process, the final four avoided the mansion altogether.

"After hometowns. the girls didn't return to the mansion. Instead, they were all put in separate hotels around Sydney and they only went back to the mansion for the final rose ceremony. Then The Bachelorette started filming the very next day after the finale."

A rogue ex-contestant shares who she thinks will win.

Since her departure on day one, ex-contestant Nadine Kodsi has had a lot to say about this season. And a couple of weeks ago, she might've spoiled the ending.

Uploading a lengthy piece of gossip to her Instagram, Nadine shared who the final two women will be. 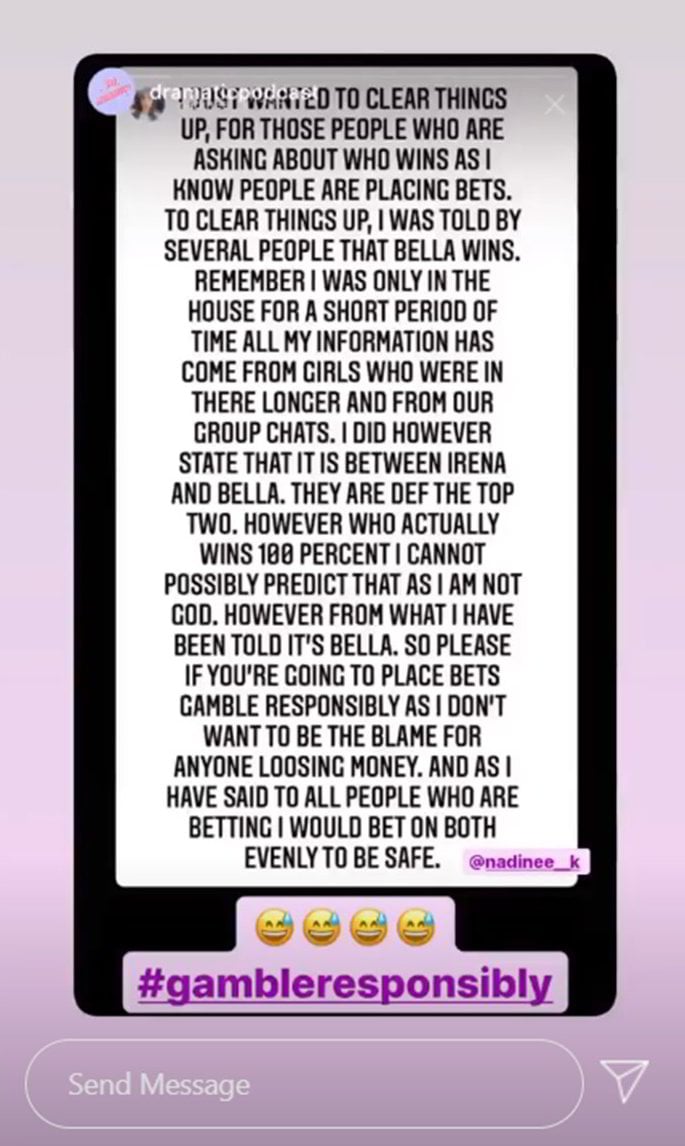 "I just want to clear things up, for those people who are asking about who wins as I know people are placing bets. I was told by several people that Bella wins," she wrote on her Instagram Stories, which was later shared by the So Dramatic! podcast Instagram page.

"Remember, I was only in the house for a short period of time, all my information has come from girls who were in there longer and from group chats. I did, however, state that it is between Irena and Bella. They are def top two."

Then, she sort of backtracks...

"However, who actually wins 100 per cent I can not possibly predict that as I am not God. From what I have been told it’s Bella. So please if you’re going to place bets, gamble responsibly as I don’t want to be the blame for anyone losing money. And as I have said to all people who are betting, I would bet on both evenly to be safe," she continued.

Soon after she spoke with the So Dramatic podcast, claiming that her belief was based off an agreement made by Bella and Locky, prior to the filming of the show.

"Apparently they met in Bali and she basically made an agreement to go on the show and then they’d be together. Now it’s so obvious because if you were there on the night, I actually said 'You are going to win,'" she continued.

"I asked her, 'Did you guys know each other beforehand?' and she said, 'No I’ve never met him'."

Nadine then explained that Bella told another contestant about this alleged agreement.

Oh, and then she backpedalled.

"It’s between Irena and her. I can’t say 100 per cent sure because I’m not certain but you can hear the voices," she added.

Well, that doesn't sound too convincing.

The producers apparently hated their jobs this season.

We've heard some more gossip surrounding this supposed pact between Locky and Bella, including some new details about how it made it difficult for the producers to control the storyline.

In an exclusive interview with the Daily Mail, Locky shut down the rumour that they knew each other before the show. However, an inside source insisted that the producers' jobs have been harder this season because of them.

"I had never met Bella prior to her arrival on The Bachelor red carpet," Locky said.

He also denied rumours suggesting that he and Bella were introduced by mutual friends and fellow Bachelor alumni, Matty J and Laura Byrne.

"Individually, Bella and I know Matty J and Laura, however, claims that we were introduced by them, or that we had made any kind of secret pact are completely false," he said.

Weeks earlier, Bella shut down those rumours too.

"I haven't been to Bali in five years and it genuinely baffles me the lengths people will go to. I've never even watched Survivor," she told The Herald Sun.

"I didn't even have a conversation with Nadine. I don't listen to it [her claims] because 99 per cent of it would be complete bulls**t," she continued.

A source also told the Daily Mail that producers hated this season because Locky and Bella made it difficult for them to create their own storylines when everyone knew the frontrunner.

"[Producers] hated their jobs this season because of Locky and Bella," an insider told the publication.

"[Bella] let it slip to the top five girls she knew Locky, and everyone was like 'what?'"

"Bella brushed it off. She slipped up," the source continued.

A confirmed relationship at the end.

It's been confirmed. Locky does find love on this season.

While appearing on The Kyle and Jackie O Show, Locky announced that six weeks ago, after the show wrapped, the new couple had a "rendezvous". But they haven't seen each other since.

"We had the rendezvous after the show, but because of COVID-19 and being locked up in a house in Perth, we haven't seen each other yet and it doesn't look likely to see each other until after the show," he said.

To which Kyle asked him to be a little more specific about what "rendezvous" means.

"This rendezvous when you spent the night with each other, is that when you took it to the next level?" Kyle said.

And Locky responded, "Use your imagination, Kyle. It's been a long year".

Whether the relationship lasts is another story in itself.

We can say with 95 per cent certainty that it is Irena who takes out the spot in Locky's heart.

But last week, the frontrunner, dropped a not-so-subtle hint that she's no longer with Locky by liking a fan's comment on her Instagram page.

"You’re too good for him tho!!" the fan wrote underneath Irena's photo.

As reported by The Wash, Irena was one of seven people who liked the comment, which suggests that she either didn't win the show or could have split with Locky after filming.

There's also the possibility that she liked the comment by accident or perhaps she did win and is just trying to throw us off the scent. ¯\_(ツ)_/¯

Honestly, there are a lot of ways to take this.

The Bachelor airs Wednesday and Thursday nights at 7.30pm on Channel 10.

Reply
Upvote
"her ex ... slid into her DMs, asking her to get back with him"
Why did he have to "slid[e] into her DMs"? Did he lose her number?
R
rush 2 years ago