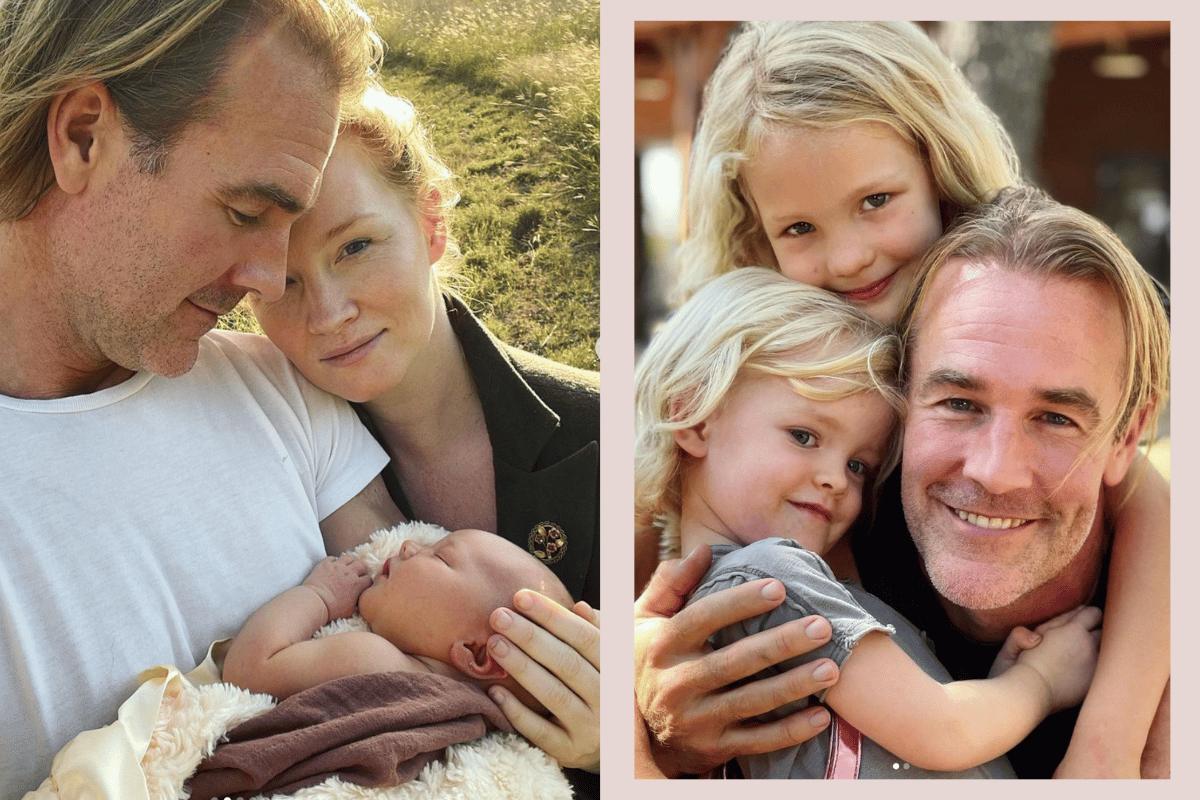 "Humbled and overjoyed to announce the safe, happy arrival of Jeremiah," he wrote on Instagram this week.

But the happy baby news from the couple also came with insight into their pregnancy journey, detailing the hardship they have faced along the way.

The actor and his wife have chosen to publicly share their experiences of miscarriage and the pain associated with it, in the hopes it will help other bereaved parents feel less alone.

"After experiencing late-term pregnancy loss twice in a row (both at 17+ weeks), we kept this one quiet. Truthfully, I was terrified when I found out," Van Der Beek said this week.

After his breakout role in Dawson’s Creek in the late '90s, Van Der Beek went on to marry actress Heather McComb, who played Scout in TV series The Outsiders.

The pair were married on July 5, 2003, but they separated after six years together, citing irreconcilable differences in April, 2009.

After finalising his divorce from McComb in March 2010, Van Der Beek and Brook announced that they were expecting their first child, before they married in an intimate ceremony at the Kabbalah Center in Tel Aviv, Israel in August 2010.

"Best day of my life so far," Van Der Beek tweeted following the wedding. "The woman I love did me the honour of [becoming] my wife today, I look forward to earning her for the rest of my life."

The couple also recently celebrated their 11th wedding anniversary, Van Der Beek taking to Instagram to share some insight into the relationship.

"Sometimes we fight. Sometimes we bicker. We go to bed angry, usually over stupid stuff that doesn’t really matter but somehow does at the moment," the 44-year-old wrote.

"But the one thing that seems pretty clear so far is that relationships are not so much about who you are - or who you were when you met - but how you evolve," he continued.

"It’s important to afford your partner room to change. To not define them by their past actions, or tendencies, or even current limitations, because that puts them in a box which may not allow space for a better, more fully realized version of themselves to take root."

Since their wedding, James Van Der Beek and his wife Kimberly have welcomed six children together.

Speaking to People in 2017, Van Der Beek opened up about being a father.

"The second I had kids, they immediately became my priority and everything I did existed to support the life that was all about them in a good way," he told the publication.

While appearing on Dancing with the Stars in 2019, the actor was regularly spotted leaving dance rehearsals with his children in tow. But it was also during this time, that the couple announced the news they had experienced another miscarriage.

When Van Der Beek announced the arrival of their newborn son this week, they also touched on just how challenging their recent pregnancies have been.

The couple noted that in their case, "a weakened cervix" had made carrying a pregnancy to full term difficult.

Over the course of their 11-year relationship, Van Der Beek and Kimberly have suffered the heartbreak of miscarriage over five times now.

Listen to Get Me Pregnant: On this episode, we cover the difficult and emotional topic of miscarriage. Post continues after audio.

"To all the families who have gone through this... you are not alone," he wrote on Instagram.

After suffering a brutal, very public miscarriage last November, we were overjoyed to learn we were pregnant. This time, we kept the news to ourselves. But last weekend, once again, 17 weeks in… the soul we’d been excited to welcome into the world had lessons for our family that did not include joining us in a living physical body. • We rushed @vanderkimberly to the hospital by ambulance for another harrowing night of blood transfusions. And as I stood by, grateful for the good people who navigated the maze of regulations to save her life – but helpless to do much for the woman I loved other than massage her feet and try to keep her warm (with my #DWTS robe, ironically) – something kept running through my head, again and again, which I now feel compelled to share: • We’ve got to take better care of each other. • The world is in pain right now. There’s denial, shock, numbness, anger – all the old patterns we cling to when deep trauma is unearthed. And there are no words to ease that pain… to make the process hurt less or to solve it quickly. But the way out of it? Starts with an open, broken-hearted contemplation of this question: • How can we take better care of each other? • And to all the families who have gone through this… you are not alone. ????

In November 2019, just one month after the couple announced they were expecting what would have been their sixth child, they suffered a miscarriage while Van Der Beek was appearing on Dancing With The Stars.

They’d excitedly allowed the reality TV cameras to film their ultrasound appointment, only to have to make a public announcement about their loss.

"We've been through this before, but never this late in the pregnancy, and never accompanied by such a scary, horrific threat to Kimberly and her wellbeing."

Wrecked. Devastated. In shock. That’s how we’re feeling right now after the soul we thought were going to welcome into our family in April… has taken a short cut to whatever lies beyond this life. We’ve been through this before, but never this late in the pregnancy, and never accompanied by such a scary, horrific threat to @vanderkimberly and her well-being. Grateful that she’s now recovering, but we’ve only just begun unpacking the layers of this one. Thank you to all of our friends and co-workers (and dance partners) who have shown up for us so beautifully during this time. As many of you have said, “There are no words…” and it’s true. Which is why in a time like this it’s enough to know that you’re there. Grieving AND counting our blessings today.

In his interview with People, Van Der Beek also spoke about how he and his wife shared their miscarriage news with the children previously.

"I think they saw how we were feeling. Our approach is to be as honest as possible. Don’t try to sugar coat anything. They get the light and the dark. You tend to think, 'they're too young to understand.' But they do," he said.

As for how the family is coping now, Van Der Beek has said it is a day by day motion, the couple now grateful for the fact they have newborn Jeremiah.

"Each child brings their own energy, their own manifestation of consciousness, their own lessons. The ones we lost each gifted us with different pieces of the puzzle… leaving us that much more grateful for the ongoing master class we get to enjoy with this sweet, wise little one," he said.

This article was originally published on October 9, 2019, and has since been updated.