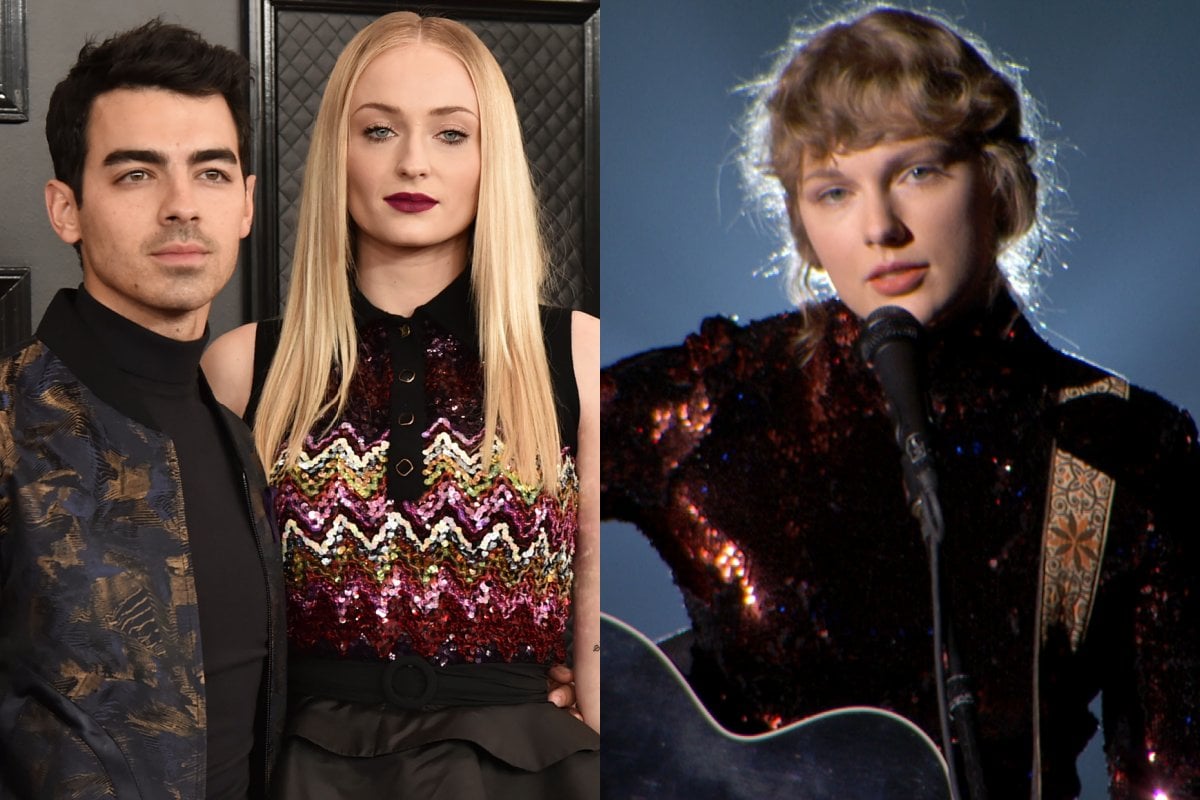 1. Taylor Swift, Joe Jonas, Sophie Turner and the song that was never meant to be shared.

If you haven't heard the news already, Taylor Swift has re-released some of her old music in a new album titled, Fearless: Taylor's Version. You'll hear some old favourites (think 'Love Story' and 'Fifteen') and some never-before-heard tracks.

One of those unreleased tracks has gained quite a bit of attention because fans are convinced it's about Swift's ex-boyfriend, Joe Jonas. The song, titled 'Mr. Perfectly Fine', is supposedly about the couple's messy breakup in 2008.

And now, his wife, Sophie Turner, has shared a photo of her listening to the song on her Instagram story and noted what she thinks about it.

"It's not NOT a bop," she captioned the photo.

And Taylor reposted it with a sweet response.

"Forever bending the knee to the queen of the north," Swift wrote back. 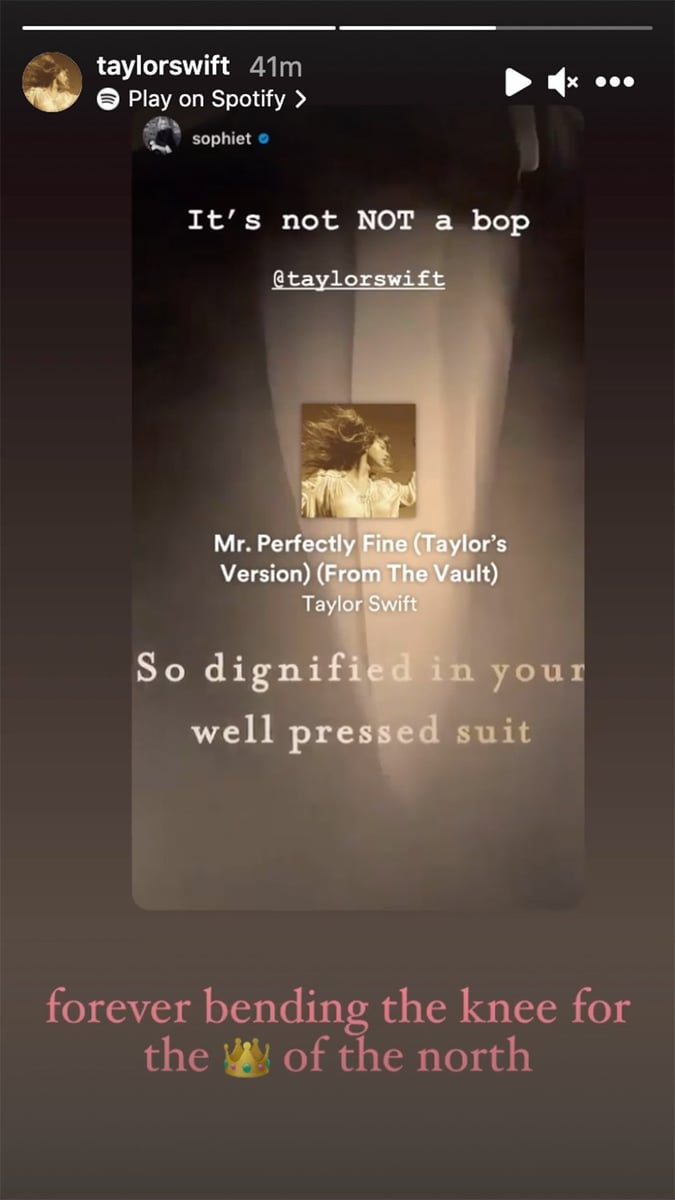 We still don't know whether the song is about Joe Jonas or not, but we're living for the banter between the two women.

2. Did Jesinta and Buddy Franklin just 'accidentally' share the name of their second baby?

"Our baby boy has arrived," Buddy wrote on his Instagram on March 24.

Since then, neither he nor Jesinta have shared the name they chose. But we now have made an educated guess.

On that same post, friend and fashion director Justin O'Shea commented, "Rocky!". So that's what we assume they went with.

The couple already has one daughter named Tallulah.

Tallulah and Rocky! Imagine that.

Just when we thought we've seen it all in reality TV, Netflix has announced an upcoming show all about Byron Bay influencers. Yes, really.

The docu-soap series, aptly titled Byron Baes, will feature a "feed of hot Instagrammers living their best lives, being their best selves, creating the best content".

"This is our love letter to Byron Bay. It's not just Chris and Zac’s backyard, it's the playground of more celebrity-adjacent-adjacent influencers than you can poke a selfie-stick at," Netflix said in a statement.

And just like all good trashy reality shows, the new series promises "fights, flings and heartbreak".

Byron Baes is also being executive produced by Emma Lamb, who worked on Married at First Sight and The Real Housewives of Sydney, so you know we'll be in for plenty of drama.

Netflix is yet to announce the cast, but The Block star and model and Elyse Knowles is already rumoured to be one of the stars involved, according to the Sydney Morning Herald.

We can already tell this is going to be wild.

4. Hailey Bieber has publicly apologised after a waitress called her 'not nice' on TikTok.

Hailey Bieber has apologised for the way she acted towards a waitress who claimed she wasn't nice and gave her 3.5 out of 10 stars in a TikTok video.

In the video, Julia Carolan said she met Hailey "a handful of times and every time she was not nice".

Speaking about the incident in video about mental health with Dr. Jess Clemons, the model said she was "so upset" when she saw Julia's comments.

"Months ago, there was this TikTok of this girl, right? And she was a waitress in New York and she was kind of rating people's level of kindness or her interaction with them on a different scale," Hailey explained.

"And she did one about me, and she was like, 'You know I didn't have a great experience with her, I just didn't feel like she was that nice'. When I saw her video I was so upset."

While Hailey said she doesn't remember meeting her, she said she wishes she "didn't act that way towards her".

"There's never an excuse for being rude. I felt bad that that was her experience with me. You never know what someone's going through.

"I remember going through times in my life where I was so sad, and so heartbroken that engaging with people felt hard for me. I don't ever remember meeting her, but I thought about it, and I regretted that and I wished that that wasn't her experience with me."

"I wish I didn't act that way towards her. I'm a human, and I made a mistake, and I acted a way that was out of character for me. I acted a way that I don't want to be. I'm trying to do better every single day, and I want to continue to grow as a person and I'm open to people correcting me."

Hailey also apologised to Julia in a comment on the video itself.

"Just came across this video, and wanted to say sorry if I've ever given you bad vibes or a bad attitude. That's not ever my intention!" she wrote.

5. Everything that's happened since Melissa found out the truth behind Bryce's 'secret girlfriend'. 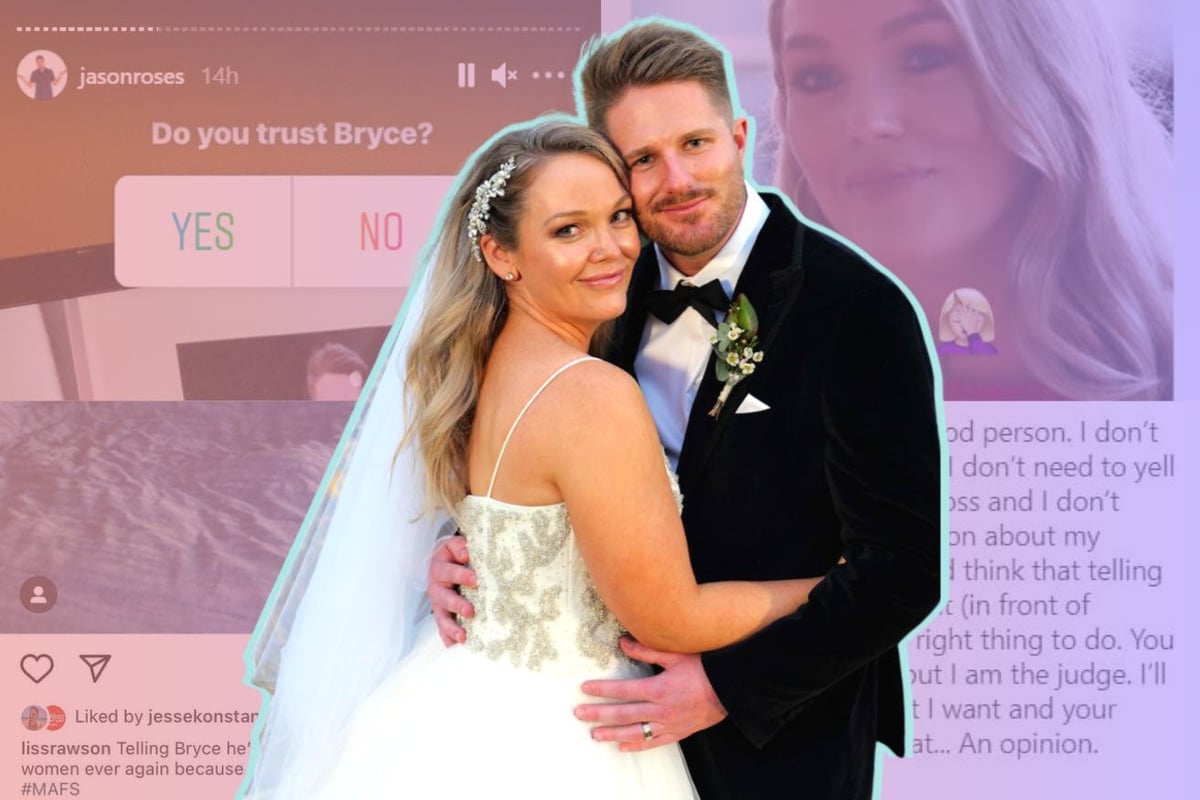 Well... Wednesday night's MAFS episode was really something, wasn't it?

The men and women gathered for separate reunions and of course, they both went south because of... Bryce.

Quick recap: At the girls' night, Beck AND Samantha told Melissa about Bryce's not-very-well-kept-secret secret girlfriend, WITH RECEIPTS, and Melissa finally seemed to believed it.

Samantha, who lives in Canberra where Bryce is also based, said she'd heard directly from one of Bryce's best mates Jason that rumours of Bryce having a girlfriend waiting 'on the outside' were true.

Melissa was upset, obviously, but the episode was filmed a few months ago which means... a lot has happened since.

She hasn't kicked Bryce to the curb, and instead, social media has been awash with reality TV drama over the last wee while.

And we simply must tell you all about it:

Melissa and Bryce made jokes about 'gifts' on Instagram.

Okay, so we know that Beck's story is that Bryce told her he was trying to get a gift to his 'secret girlfriend' in Canberra. Then when in Canberra, we saw one of Bryce's mates admit the gift thing was true.

But now... Melissa and Bryce are joking about gifts on Instagram.

Read everything else that's happened since Melissa found out the truth behind Bryce's 'secret girlfriend' in our earlier post here.