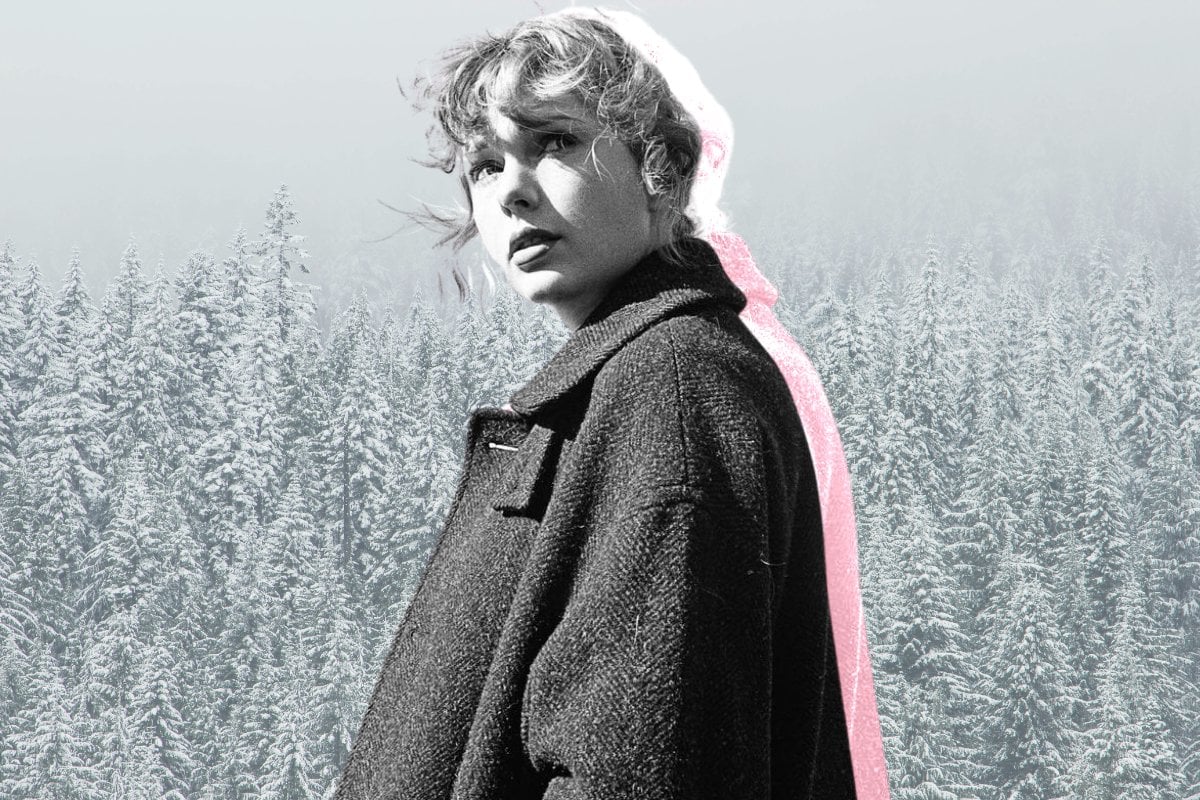 Because apparently dropping one studio album wasn’t productive enough, Taylor Swift has kindly deposited her second album of 2020 into our ear-holes in the form of Evermore.

As a follow on from Folklore, this album definitely sticks with the country/folk/campfire vibes, but… what are we saying, you’re not here to academically review the musical prowess of Ms. Swift.

Look, before we all get too hyped about finding out more about Taylor Swift’s private life with this album release, we’re gonna preface that before dropping the album the singer politely reminded her fans that these are ‘tales’ she created - so the stories are not entirely based on her real life.

...But that doesn’t mean there aren’t super-subtle, very small and sneakily hidden clues that point to bigger pictures about Swift. In fact, we’ve spotted seven Easter Eggs in Evermore already, so you can bet we’ll share them with you right here.

'Marjorie' is about Taylor Swift’s grandma.

As the singer told Esquire in 2014, Marjorie Finlay was an opera singer and inspired her choice to pursue a career in music before her death in 2003. "She was always singing, either around the house, or every single Sunday she'd get up and sing in front of the entire congregation at church," Swift said. It seems that Marjorie inspired track 13 on Evermore.

🔍 | Track #13 is "marjorie" – the name of Taylor Swift's grandmother, who was an Opera singer and also inspired Taylor's passion for music. pic.twitter.com/UfXXeV0eX7

The track features beautiful advice passed down from Swift’s grandmother to her, including "Never be so kind you forget to be clever". Genius G-ma.

Taylor Swift was inspired by True Crime podcasts and documentaries.

Because aren’t we all?!

Yup in the record ‘No Body, No Crime’ featuring Swift’s musical besties HAIM, the four sing about Este (one of the HAIM sisters) covering up an actual murder.

So far no further investigations into Este and her potential past crimes have been conducted.

Taylor Swift’s boyfriend, Joe Alwyn, was behind at least three tracks on the album.

Yup, Joe Alwyn is back again - under the pseudonym William Bowery, of course. This time he co-wrote ‘Champagne Problems’, ‘Coney Island’ and the title track ‘Evermore’, which also features Bon Iver.

In fact, Alwyn even plays the piano on ‘Evermore’ which feels v. cute.

‘Coney Island’ could defs be referring to an awkward Calvin Harris memory.

Taylor Swift’s longest relationship (outside of her current one with Alwyn) was with Scottish music man Calvin Harris. The pair dated for two years and were pretty private, but we sometimes got a rare glimpse into their relationship - including this lopsided one-year anniversary cake moment:

Taylor and Calvin celebrating their one year (via Calvins snapchat💛💛💛 pic.twitter.com/JXTfpx8T5q

Now fans are speculating that a specific 'Coney Island' lyric is referring to their time together: "But when I walked up to the podium I think that I forgot to say your name."

There was a lot of semi-awkward crediting moments in Harris and Swift’s relationship, where the two worked on each other’s music but then were not appropriately credited on the album or song royalties. Could this have been a long-overdue apology? Or a jab at Harris?

‘Long Story Short’ may or may not be about Tom Hiddleston.

Hinting at Swift’s short-lived relationship with British actor Tom Hiddleston, the lyrics indicate a rapid leap from one relationship to another (eg. her moving on from Calvin Harris with Hiddleston):

And I fell from the pedestal
Right down the rabbit hole
Long story short, it was a bad time
Pushed from the precipice
Clung to the nearest lips.

...In short, she’s basically saying that Hiddleston was a rebound and that was, errr, a mistake. (Sorry Tom.)

This ties in nicely to a previous fan theory that ‘Getaway Car’, from Swift’s Reputation album is also about Hiddleston where she knew that the relationship was doomed but it was a necessary evil to get over Harris.

I was lying to myself
I knew it from the first Old Fashioned, we were cursed
We never had a shotgun shot in the dark.

People think that ‘Gold Rush’ is about Harry Styles’... hair.

Yes, this one really feels like a stretch, but we’re kinda into it so HERE WE GO.

Taylor Swift dated Harry Styles for a hot minute (read: three months) back in 2012. While it wasn’t a monumental relationship in Swift’s life, it’s certainly one of the most intriguing and one that she’s often still asked about. For that reason, fans are convinced that the following four lines are about Harry Styles and his well-loved hair, of course.

What must it be like to grow up that beautiful?
With your hair falling into place like dominoes.
Everybody wants you,
Everybody wonders what it would be like to love you.

Listen to Mamamia’s podcast The Spill, where Laura Brodnik and Kee Reece discuss how busy Taylor Swift has been in isolation.

‘Dorothea’ is about Selena Gomez.

Because it doesn’t all have to be about boyfriends, okay?!

There are a s**ttonne of clues pointing to this track being about Swift’s friendship with Gomez, including a lot of heartbreaking nods to Gomez’s past. It almost reads as a love letter to her, with Swift reminding Gomez that she always has a home with her.

Let’s break down the individual lyrics so you know what we’re yapping on about.

Firstly, the name ‘Dorothea’ is either a link to Gomez’s favourite movie The Wizard of Oz, which of course has Dorothy as the lead character OR the fact that Gomez played a character called Dorothy in The Fundamentals of Caring.

9. Selena Gomez played the character named ‘Dot’ which is a short for Dorothy, in the movie ‘The Fundamentals of Caring.’ ( - @anakpasa pointed this out!) pic.twitter.com/9HGRGZ98NW

“Honey, making a lark of the misery.”

'Lark' is English slang for ‘fooling around’ or ‘making a joke of something’ (no doubt influenced by her British boyfriend Alwyn), so the lyric is explaining that Gomez has been able to make a joke or find success in her misery.

As Gomez has released a number of chart-topping tracks about her ‘toxic’ relationship with Justin Bieber, this could be exactly what Swift is referring to with this lyric.

3. “Honey, making a lark of misery” is referencing finding love in a miserable place. Back in 2013, Selena was dating her ex-boyfriend Justin Bieber, with who things didn’t end well and both agreed that it was a toxic relationship. pic.twitter.com/w56G0MwFBQ

“You got shiny friends since you left town.”

It’s no secret that Gomez has a LOT of A-lister pals.

you got shiny friends since you left the town pic.twitter.com/5R08EHpJqO

“A tiny screen’s the only place I see you now.”

Let’s be frank, these two mates are rather busy, so they often catch up over phone calls - with Swift even appearing on Gomez’s cooking show via FaceTime.

and tiny screen’s the only place i see you now pic.twitter.com/kS9oCUk3Zm

“And if you're ever tired of being known for who you know
You know, you'll always know me, Dorothea.”

This could be hinting at Gomez’s disdain for forever being referred to as ‘Justin Bieber’s ex’, somewhat losing her individual identity by always being tied to that relationship.

6. “And if you’re ever tired of being known for who you know” Selena is often being cited next to Justin Bieber’s name, which can be exhausting. pic.twitter.com/vsHkcjcj3M

“Ooh, you'rе a queen sellin' dreams, sellin' makeup and magazines
Ooh, from you I'd buy anything.”

If you didn’t know, Gomez has graced the covers of literally thousands of magazines and she’s just released her own makeup line called ‘Rare Beauty’.

“When it was calmer, skipping the prom just to piss off your mom and her pageant schemes
And damn, Dorothea, they all wanna be ya.”

Gomez shared a throwback of her mum’s ‘pageant schemes’ as a handy bit of proof for your eyeballs.

Oh my... Talk about tbt. pic.twitter.com/83SQw6tMtM

“And I got nothing but well-wishes for ya.”

It seems that no matter how often they see each other, and what happens in their individually hectic lives, Swift will always love Gomez.

And that’s the right size dollop of loveliness to get us through the rest of 2020.

Thanks Taylor Swift for being the most productive little bean during a pandemic.