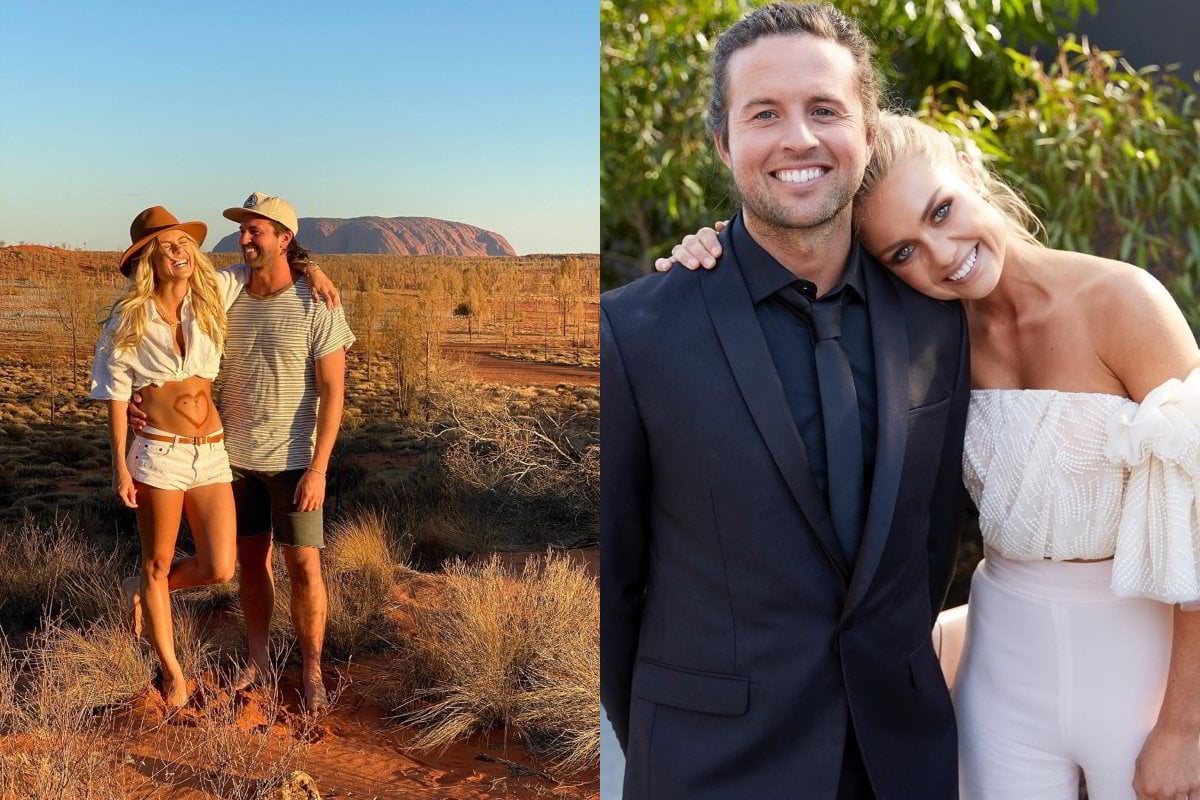 The 27-year-old model and Barker, who won The Block together in 2017, announced their pregnancy on Instagram on Wednesday, writing a simple 'And then there were three' with the hashtag #babybarker.

The couple posed, with a heart drawn on Elyse's stomach, in front of Uluru where they're currently holidaying.

Elyse and Josh, 31, have been together for seven years after meeting in Josh's hometown of Byron Bay in 2013.

The couple have lived in Elyse's home in Melbourne for most of their relationship, with their two weimaraners, and in 2017 appeared on The Block - taking out the competition when their renovated house was sold to comedian Dave Hughes, pocketing them a cool $547,000 in prize money.

Elyse was a successful Australian model prior to appearing on the show, working for brands like Billabong and Seafolly, but the show's publicity sent her profile skyrocketing - and in 2018 she took over as Myer brand ambassador from Jennifer Hawkins.

Speaking to Mamamia in 2018, she admits the considered backing out of The Block at the last minute.

SECRETS OUT! Joshy and I are on THE BLOCK this season😝🔨🏡 ! Holly Molly what an adventure we are on @theblock @barks11 head to my website : www.elyseknowles.com.au for more info and behind the scenes 😛 #theblock #channel9 @channel9

Elyse says that ultimately her experience on the show made her and Josh even “stronger” as a couple.

“You learn a lot about each other… To get through that together, you kind of feel like you can get through anything,” she told Mamamia.

The couple shifted to Byron Bay in early 2019 and in a blog post, Elyse documented how much she loved her new home's environmental consciousness.

She said while Melbourne was always home, she had fallen in love with the relaxed Byron lifestyle.

"Don't get me wrong, I adore Melbourne and I will certainly miss my family and so many elements of that beautiful city (which is my home!).

"But for this stage of my life, I am exactly where I need to be. Literally! As I am writing this it's 7pm, warm & balmy and I am outside in my bathers taking it all in. One happy little Vegemite."

Happy birthday mr. Can’t wait for many more with you 🦋 @joshy.barker

In August 2019 Elyse told the Daily Mail she saw their move being permanent and imagined raising a family in the area.

"It's a great change for us... a sea change and a lifestyle change. I do love Melbourne and it's always home for me, but at the moment I think we'll stay for good. I can see us bringing up our own family [in Byron Bay]."

In May the couple purchased a 1960s beach house in the town - a perfect renovation project for the couple and their business J & E Projects.

In December 2019, Elyse told Gritty Pretty she wanted to start a family before she turned 30.

"I just keep thinking that my mum had me at 28 and oh my gosh, I need to get going," she said.

"I want one or two kids by 30... I just don’t want to wait until too late in my life. I'd rather put family first and then career."

Landed in the @NTAustralia 🐪 and couldn’t be more excited 🙌🏽 Last night in the Alice Springs Desert Park at the @parrtjimaaustralia light show🌾🌾 Its been on our bucket list for so so long !! If it’s not on yours yet, put it on there RIGHT NOW !!! The colour of our land is so dam amazing #NTAustralia

She said Josh doesn't like talking about getting married, and the couple were keen to go at their own pace despite outside pressure.

"[Josh] very much likes his own rule book and I'm totally okay with that, too. I think we're on our own journey and we're happy at the moment," she said.

Josh told WHO Magazine in June 2019 marriage wouldn't change anything in their relationship.

"I think we’ve just both got separate dreams and ambitions and stuff that we want to achieve together," he said.

"It's not gonna change anything... Other than the ring, that's it. And a bit of paper that you'd get and end up putting in your bloody side drawer. I've had so much outside pressure but I'll do it when I'm ready."

Are you thinking about having a baby in the next 12 months? We want to hear from you - take our short survey for your chance to win $50