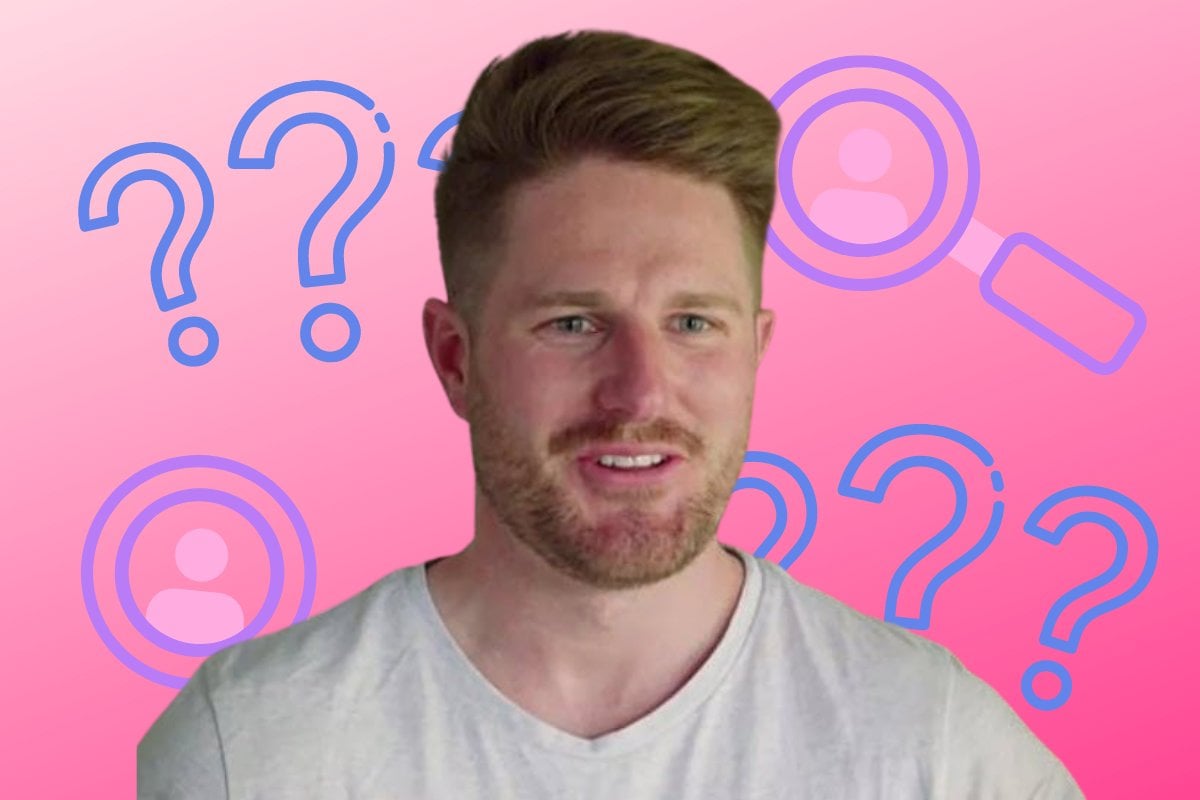 Precisely everyone in Australia knows Bryce from MAFS has a secret girlfriend, but he still hasn't... admitted it.

The rumour has been circling for months (seriously, how long is this damn show?), and he's done precisely nothing to allay anyone's fears that this is true.

Watch: Melissa and Bryce get some difficult feedback from their families on Married At First Sight. Post continues below video.

It's all set to come to a head on this week's episodes of the show, after his friends did a really bad job of pretending he did not in fact have a secret girlfriend waiting 'on the outside' in front of Bryce's TV-show wife Melissa.

Let's start with the juiciest stuff: the girlfriend herself.

So Dramatic! has released pics of Bryce with a woman named Courtney, looking very much a couple at a wedding just three weeks before MAFS filming started.

So Dramatic! host Megan Pustetto confirmed from a source, one of Bryce Ruthven’s former colleagues, that the secret girlfriend was real.

They'd reportedly began dating a couple of months after Bryce split from his ex-fiancé (and when he'd already been cast for MAFS).

"He lied to her and convinced her he was just doing the show to further his career and he asked her to wait for him. She agreed. So then he kept her on the sly the entire time," Pustetto's source said.

"All of Bryce's friends knew about Courtney, even the ones who were at his TV wedding... Their relationship was not a secret."

Woman's Day claimed that Bryce "texted, FaceTimed and even tried to visit his secret girlfriend during filming" and, as the story goes, Courtney was sticking around waiting for Bryce to come back to her after the show.

But... he dumped her two weeks before filming ended, according to So Dramatic!

Samantha is about to blow it all up.

We will watch the entire MAFS cast reunite over the season's last few episodes, and it appears Samantha is going to blow the lid off this whole damn thing.

One of her 'sources' was radio host Jason Roses, who actually attended Bryce and Melissa's wedding.

"I was out for drinks with friends and Jason asked me, 'Have you heard about this other girl Bryce is stringing along while he's on the show? He's doing the show just to bring exposure for his career,'" Samantha told TV Week.

"That's when I thought, 'No, I'm not going to let what happened to me happen to Melissa – I'm going to go in and tell her exactly what I've heard, instead of her finding out after everyone else has.'"

We will watch Samantha expose the not-very-secretive secret during the girls' night ahead of the full-cast reunion.

Samantha had initially planned to break the news to Melissa privately, but decided to do it in front of all the women to stop any gossip behind Melissa's back.

"It was hard," Samantha said.

"It's harsh to hear when you're in love with somebody. I told her that I'm upfront, and Melissa said she needed to go over it with Bryce and ask him about it in more depth."

Anyway, it's not the first time we've heard about this Jason person in regards to Bryce's 'secret' relationship.

Speaking on The Anj, Rob & Robbo Show in February, Jason explained how at Bryce and Melissa's wedding, he accidentally let something slip when he thought he wasn't being filmed.

And you betcha it's going to come up at the full-cast reunion, which was filmed earlier this year but will air next week.

"What I said was now shown to the entire cast of Married At First Sight," Jason said at the time.

"It was at the reunion, and they've basically said, 'Bryce, if you think you're telling the truth, this is what your friend had to say in secret'."

It is probably unsurprising the hear that Jason and Bryce are uh, no longer mates.