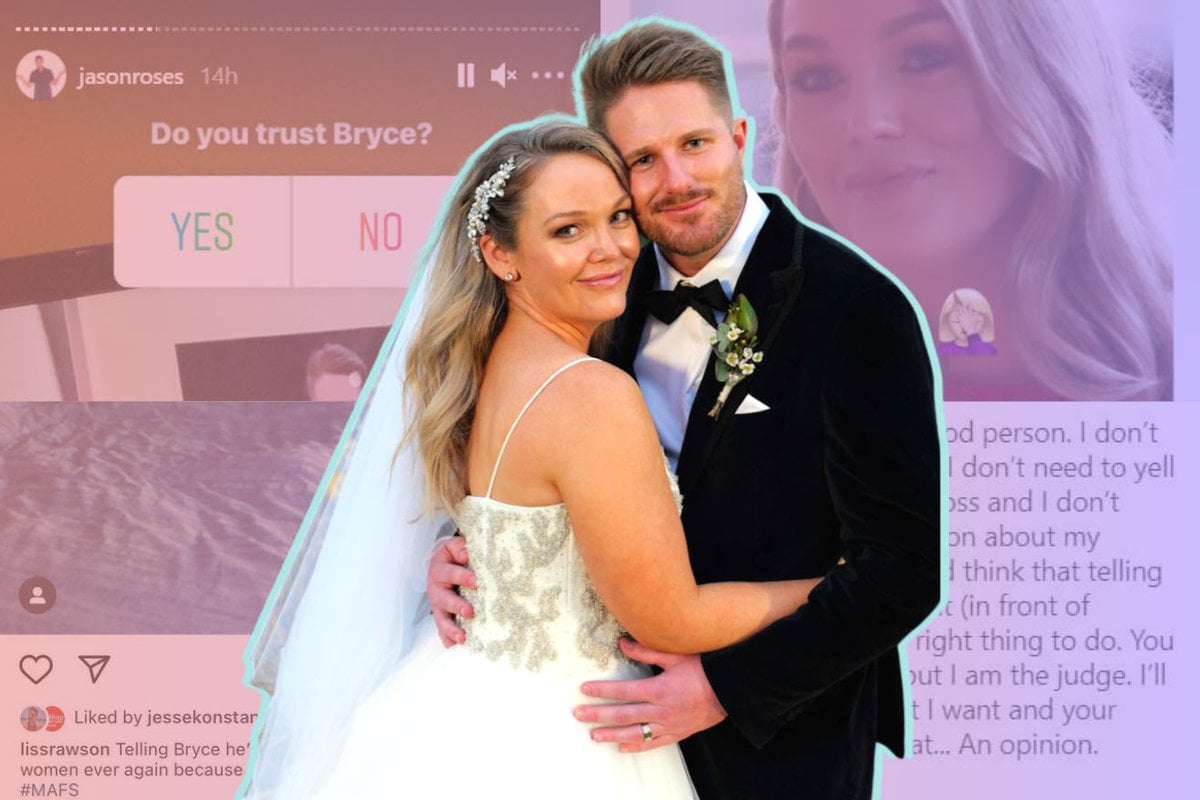 Well... Wednesday night's MAFS episode was really something, wasn't it?

The men and women gathered for separate reunions and of course, they both went south because of... Bryce.

Quick recap: At the girls' night, Beck AND Samantha told Melissa about Bryce's not-very-well-kept-secret secret girlfriend, WITH RECEIPTS, and Melissa finally seemed to believe it.

Watch: The final dates on MAFS. Post continues below video.

Samantha, who lives in Canberra where Bryce is also based, said she'd heard directly from one of Bryce's best mates Jason that rumours of Bryce having a girlfriend waiting 'on the outside' were true.

Melissa was upset, obviously, but the episode was filmed a few months ago which means... a lot has happened since.

She hasn't kicked Bryce to the curb, and instead, social media has been awash with reality TV drama over the last wee while.

And we simply must tell you all about it:

Melissa and Bryce made jokes about 'gifts' on Instagram.

Okay, so we know that Beck's story is that Bryce told her he was trying to get a gift to his 'secret girlfriend' in Canberra. Then when in Canberra, we saw one of Bryce's mates admit the gift thing was true.

But now... Melissa and Bryce are joking about gifts on Instagram.

Things are icy between Melissa and Samantha.

After the ep, Melissa jumped on Insta and... went to town, slamming the other women for 'holding on' to the info for weeks.

"I'm a good person. I don't make assumptions. I don't need to yell to get my point across," Melissa wrote.

"I don't hold onto information about my friend for weeks and think that telling them at a girls' night (in front of everyone!) is the right thing to do.

"You can be the jury, but I am the judge. I'll see fit to do what I want and your opinion is just that... an opinion."

This didn't exactly go down well, with Samantha sharing the post to her Instagram story with a whole bunch of face palm emojis.

Before the ep aired, Samantha told TV Week she initially planned to break the news to Melissa privately, but decided to do it in front of all the women to stop any gossip behind Melissa's back.

There's also been 'insiders' telling New Idea producers persuaded Sam to do it on camera and in front of everyone. ¯\_(ツ)_/¯

Bryce and Jason are no longer pals.

Speaking on The Anj, Rob & Robbo Show in February, Jason explained how at Bryce and Melissa's wedding, he accidentally let something slip when he thought he wasn't being filmed.

Soo... It is probably unsurprising the hear that Jason and Bryce are uh, no longer mates.

In fact, Jason has been sharing some pretty savage posts towards his (ex) mate while recaping the show on Instagram: 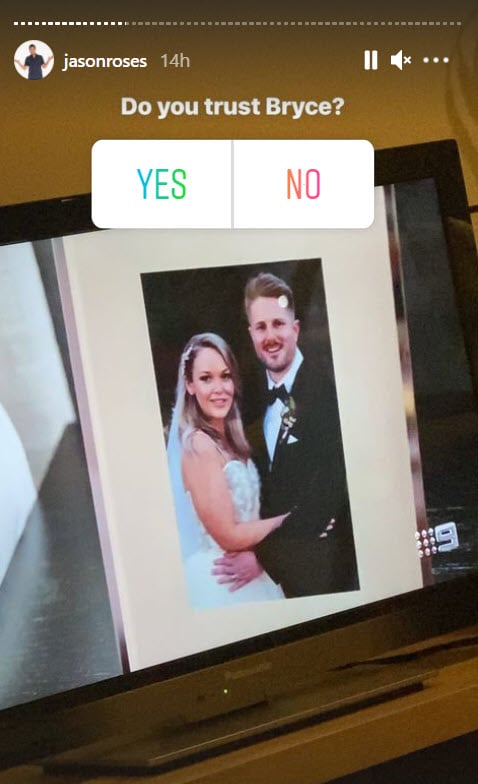 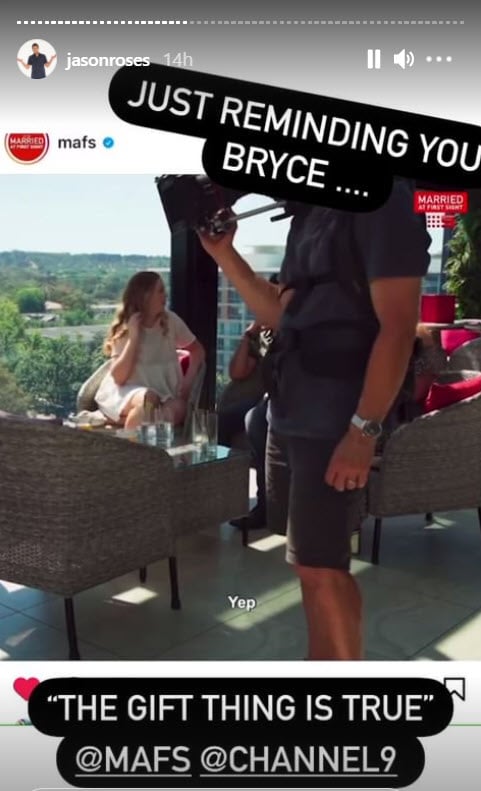 "After watching, from what I've seen, I absolutely – my heart breaks for Melissa, based on what I've seen, because there's only so much I can or can't say," he concluded.

Okay, so then came rumours that Samantha's 'bombshell' was scripted. Because this situation wasn't ridiculous enough, you see.

Anyway, she's denied this and offered proof of her and Jason's long-standing friendship to show how she would happen upon him during a random night out in Canberra.

She then commented on a post from So Dramatic!:

"Definitely wasn't scripted and I had no idea that [Beck] had already heard this off Bryce himself. It made me feel sick hearing it and I didn't want what happened to me happen to Melissa."

Bryce and Melissa are living together now.

According to an interview Bryce did on Wednesday with the Hit Network's Cliffo & Gabi radio show, not only are he and Melissa still in a relationship, they've also moved in together.

He also told Kyle & Jackie O they'd talked about "making it official" which means... getting married, because their TV marriage is actually fake... despite the show... pretending it's not.

He said they "want a normal family life" once all the drama and speculation about their relationship dies down and that he's already picked out an engagement ring.

"I'm just waiting for the right time. I've got some big grand plan that doesn't involve Channel Nine," he said.

Bryce addressed his "villain" edit on his private Facebook.

After the reunion episode aired on Wednesday night, Bryce discussed the episode on his private Facebook page.

Rather than address his behaviour, he said he was glad the public are now "seeing what the experience was really like."

"Thank you for all the messages tonight checking in on how we're both doing, and apologies I haven't gotten back to anyone," he wrote.

"I'm not being rude but as I'm sure you can understand, seeing what's coming out on the TV show is unbelievable and I'm speechless for once in my life. It's good to see the general public can see what the experience was really like for us." 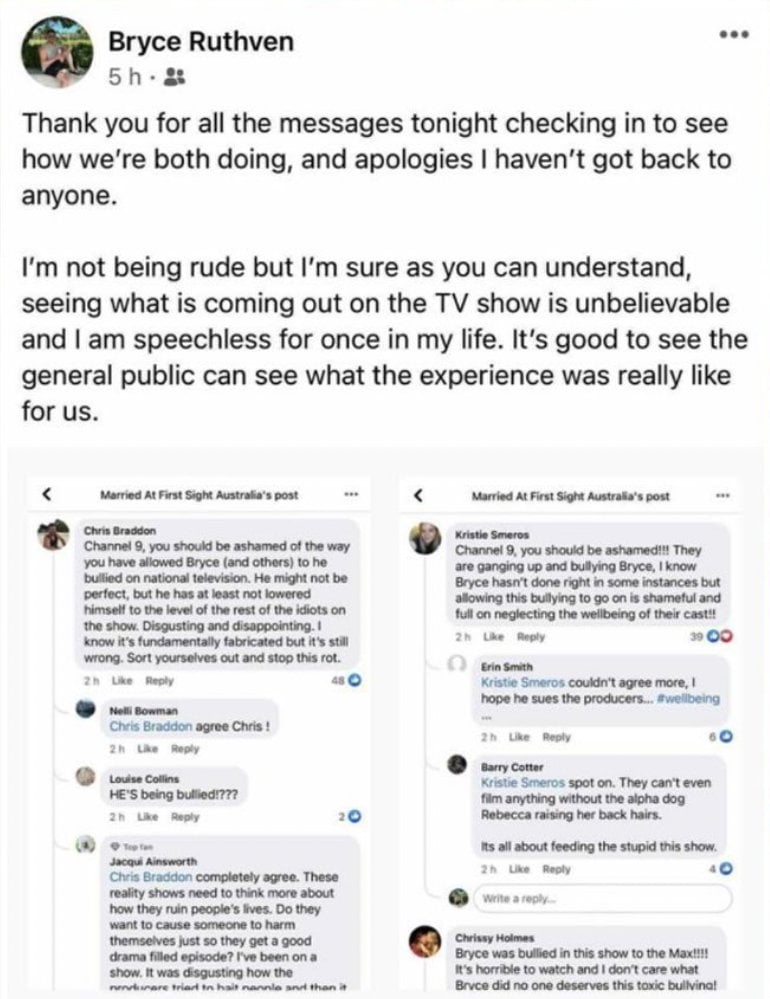 He then attached screenshots from the MAFS Facebook comment section, where a few commenters told Channel Nine off for bullying.

"Channel Nine, you should be ashamed of the way you have allowed Bryce (and others) to be bullied on national television," the commenter in his screenshot wrote.

"He might not be perfect, but at least he has not lowered himself to the level of the rest of the idiots on this show. Disgusting and disappointing. I know it's fundamentally fabricated but it's still wrong."