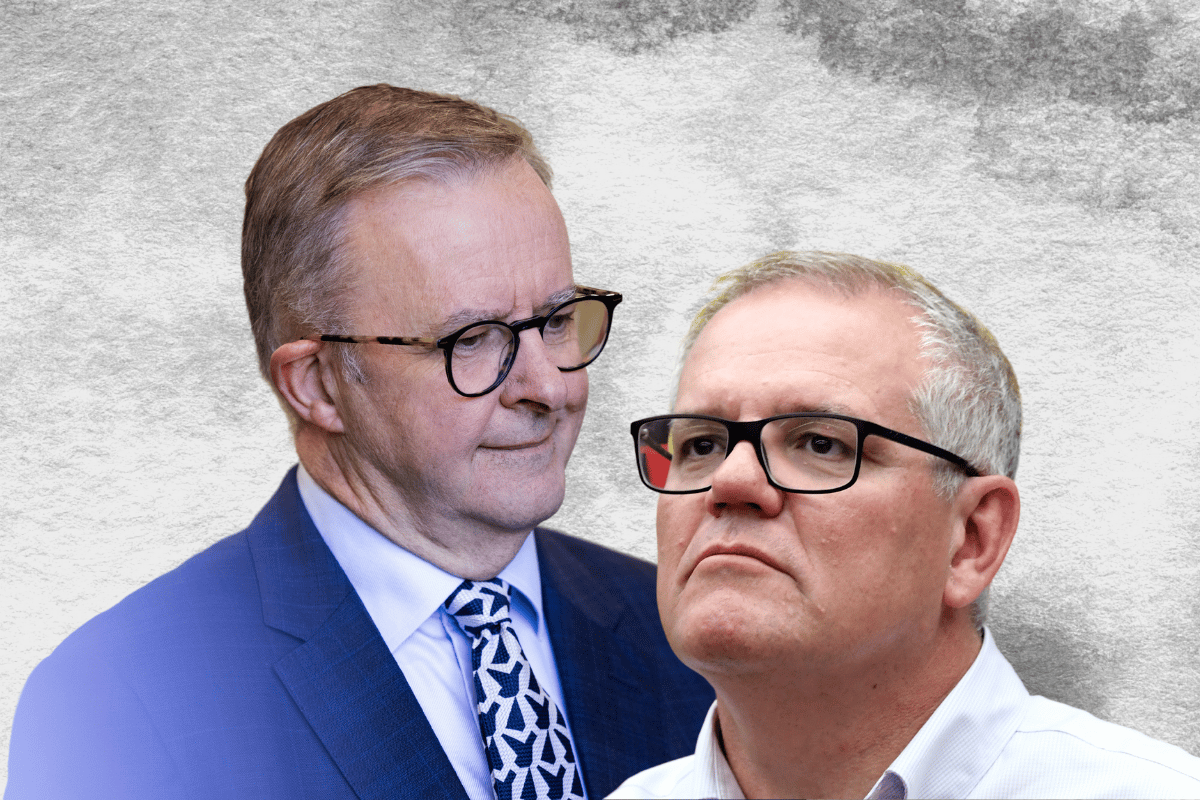 Our federal election is fast approaching which means our Prime Minister Scott Morrison and the leader of the Australian Labor Party - Anthony Albanese - will spend the next few months talking about each other a lot.

Of course, it's what you'd expect from an election, and for the most part, these conversations need to be had.

I welcome any talk about policies, climate change, and women's general treatment. After all, a woman is still dying every week because of domestic abuse, and half of NSW is currently battling the aftermath of floods.

We need strong leadership in these trying times.

But on Monday, Morrison got a bit off-topic when he decided to make a jab about Albanese's weight loss while speaking with Sky News host Paul Murray.

His comments weren't about anything to do with Albanese's politics or policies.

Instead, they were about what size pants Albanese is currently wearing.

Of course, he was probably referencing the Women's Weekly photoshoot that saw the Australian Labor Party Leader looking handsome and appearing noticeably slimmer; he was definitely giving his best blue steel.

This is often pretty typical when politicians are gearing up for a big election. They tend to take a holistic approach to winning, so they want their talking points to be sharp and they also want to be at the top of their health game.

However, Morrison's comments imply that if your weight changes, you may change. It's the equivalent of people commenting that Rebel Wilson wouldn't be funny anymore because she is now thin. Naturally, Morrison's comments led to backlash and Twitter threads, and I'm sure by the end of the day, even memes.

You know Scott Morrison is shit scared and has no policy to run with when all he can do is have a go at Anthony Albanese losing weight.#CallTheElectionDickhead

People recognise how absurd it is to imply weight loss says anything about who a person is. However, these are the kind of comments women have been copping for years, but it's only now that there seems to be mass outrage.

It's interesting, isn't it? When a man suddenly receives the same treatment that women have been receiving for years, it seems easy for people to see how silly it all is and to see through it.

Yet, this kind of rhetoric around weight is normal for women, and often it has real-world consequences.

Many female stars have shared how their weight has impacted their ability to get specific roles; including powerhouses like Amanda Seyfried and Mindy Kaling. Even, Rebel Wilson recently joked that she lost weight to get more roles - but was it a joke?

The truth is women’s bodies often do define their careers.

Remember earlier this year when a headline by The New York Post went viral. It read: "Adele's Oprah concert proves she didn't lose her voice with those pounds." See, it's relatively common for women's abilities to be judged depending on what size dress they are currently wearing. Men are usually exempt from this kind of treatment.

Morrison's comments are interesting because usually, men can gain or lose weight, and their careers and character don't come into question. Look at someone like Jonah Hill, who lost weight and his body changed, but his career continued to soar. In contrast, Rosanne Barr has theorised that her show got cancelled because of her weight loss.

Honestly, I found Morrison's comments pretty troubling. Politics aside, I don't think anyone's body should become a talking point in an election. I'm happy for them to duke it out over financial policies, but I don't want either of them commenting on each other's bodies. Let alone imply that what they weigh says anything about their ability to lead our country. It just doesn't.

You see, this is the issue. What Morrison says may just seem silly. It'd be easy to write it off as a jab that didn't quite resonate with Australians, but to me, it's horrifying.

Because I'm sick of people's bodies being used against them.

We need to separate people's physical appearances from who they are, and then may the best man win.

Reply
Upvote
3 upvotes
I would love to see some articles regarding climate policies of the major parties - which maybe could be updated as more gets announced. Liberal is in serious trouble at the moment, but it’s also important we get both these “insert negative word” to stop these cynical political games and start focusing on issues that matter.
Sorry I do agree with this article I just didn’t know where else to make this comment.
C
cat 2 months ago

Reply
Upvote
@daijobou we aren't technically in an election yet, they haven't released any policies. Except we all know the LNP policy is to do as little as humanly possible then blame everything on someone else.
D
daijobou 2 months ago

Reply
Upvote
1 upvotes
@cat I’m not sure why not technically being in an election would mean current policies cannot be discussed? It is the number one most important issue and we seem to have time to discuss everything else under the sun. History will not treat us kindly if we add climate change as a footnote.
I’m interested to know if the future of our kids is not important to LNP - whether the current situations with Russia and China could spear them into some actions? Relying on autocracies for oil and allowing them to corner the market on energy efficient technologies is proving unreliable and puts us at a serious disadvantage.
C
cat 2 months ago

Reply
Upvote
@daijobou it doesn't mean they cant be discussed, but it does mean that we don't have them to discuss. Labor wont present their policies until the election is called, otherwise the LNP are just getting more time to run scare campaigns. They will release their policy when the government is in caretaker mode & Scomo doesnt have 10x the media access that Albo does.
I think its quite clear that the future of kids isn't important to the LNP, but because they've spent a decade recklessly destroying it,  not because of Russia. They will just argue that Australia continuing to provide fossil fuels makes the world less dependant on Russia therefore fossil fuels are important for democracy.
D
daijobou 2 months ago

Reply
Upvote
@cat hold on that is not correct, Labor does have policies on managing climate change. I just looked up on their website and there is plenty of fantastic stuff there which can be discussed. The media is doing Labor and voters a disservice by focusing on cynical political plays. We should not be complacent and play to this strategy.
L
laura__palmer 2 months ago