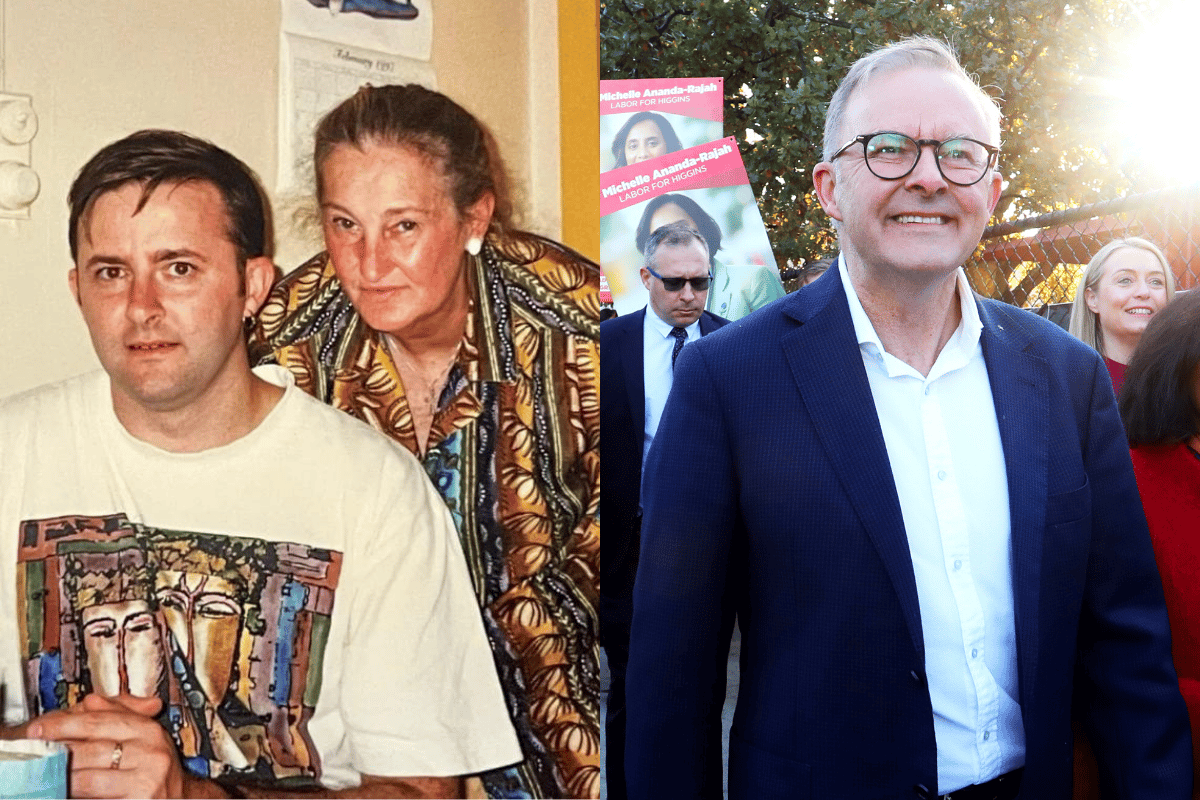 As a teen, Anthony Albanese sat down with his mother for dinner.

It was just the two of them, as it always had been. Albanese’s father had died in a car crash before he was born.

Or at least, that’s what he thought until that dinner. His mother told him his father was most likely alive and living in Italy.

She had met him overseas and fallen pregnant: that part of the story he’d known his whole life was true, but Albanese’s father was engaged to an Italian woman and had stayed with her. He’d never come to Australia.

More than four decades on from that fateful conversation, Anthony Albanese is now not only the Australian Labor Party leader but he has just been elected as the 31st Prime Minister of Australia.

Speaking to Mamamia's No Filter podcast in December last year, Albanese chatted with Mia Freedman about his private childhood, the influence of being raised by a strong, single mother and his search for his father.

Albanese has spoken often of his mother, Maryanne, who raised him alone in public housing in Sydney’s inner west while on an invalid pension.

Maryanne fell pregnant in her late 20s after the trip of a lifetime overseas. She was single and Catholic, which left her with very few options. So she came up with a story: she had met, fallen in love, and married a man in Italy who had then died in a tragic car accident before her son was born.

"The term illegitimate or bastard are pretty brutal terms. It was more 'honourable' for her to be considered a widow, rather than a single mum at this time," Albanese said on No Filter.

But on one fateful night, Maryanne decided to tell her son Albanese the truth.

"She later said it was so difficult for my mum to tell me her story, because she felt as though there was some shame in what had occurred. It took a lot of courage."

Initially, Albanese says his focus was on his mum's wellbeing, rather than the potential of finding his father.

"She was very loving. She gave up so much for me. And like a lot of women at the time, she really lived her aspirations through me: trying to give me a better shot at life than she had," Albanese said of his mum.

"Once she died, I felt like I could tell people my story and start to search for my father without feeling like I was dishonouring her contribution," Albanese shared on the podcast.

By this time, Albanese had been married to his then-wife Carmel, and the couple had a son, Nathan.

Nathan, then four or five years old, went with his father to visit Maryanne's gravesite. While at the site, Nathan said to Albanese, "Where's your dad?"

It stuck with Albanese: "I felt I couldn't lie to Nathan. It wasn't fair on him. As I got older, I felt I needed closure."

When looking for his father, all that Albanese had to go off was one photo from a ship his dad had previously worked on.

A post shared by Anthony Albanese (@albomp)With the help of friend Ann Sherry, who was the head of Carnival Cruises, and maritime historian Rob Henderson, Albanese succeeded in his 'needle in a haystack' search.

While in Commonwealth Parliamentary Offices, Albanese was about to chair a dinner of the Australian Transport Council when he received a phone call.

"It's a moment I'll never forget. Sherry said 'we've found him', and it took my breath away because I didn't think that would happen," Albanese wrote in an article for Mamamia in 2017.

At the age of 46, Albanese travelled to Italy and, with the help of the Australian Embassy in Rome, where he met his father Carlo and his half-brother and half-sister.

"He walked in and opened his arms to me and we embraced," Albanese said. "It was quite - it was incredibly generous of him, I think, and it was a very poignant moment. There were tears and we talked for a few hours."

His father's family, and wife of multiple decades, were welcoming of Albanese.

"They were worried initially. But they were incredibly generous. They realised, it is what it is: life is complex. Italians get that!"

Listen to Mamamia's No Filter podcast: The private life of Anthony Albanese. Post continues after audio.

Albanese continued to visit Italy and said his final goodbye to his ill father, who died in 2014.

"I was very pleased that I was able to have that final engagement with him. He was lucid and he told me - the last conversation we had was that he was glad that we had found each other."

Albanese worked for the Commonwealth Bank for two years after high school, before studying economics at the University of Sydney.

His political life started in university. He then went on to work for Labor minister Tom Uren and NSW's ALP party machine before winning the seat of Grayndler in Sydney's inner west 1996, which he has held ever since.

He used his maiden speech in Parliament to signal his support for funding public infrastructure, multiculturalism, Aboriginal title, minimum wage and childcare.

He concluded by saying: "For myself, I will be satisfied if I can be remembered as someone who will stand up for the interests of my electorate, for working class people, for the labour movement, and for our progressive advancement as a nation into the next century."

Three years later he was in the Shadow Ministry and, after Kevin Rudd became leader, Manager of Opposition Business in the House.

When Labor came to power in 2007, he became Minister for Infrastructure and Transport, Minister for Regional Development and Local Government and Leader of the House of Representatives.

He championed entitlement to superannuation for same-sex couples, trying four times over nine years to move a private member's bill that would've given them the same rights as de facto heterosexual couples. When the legislation was finally passed after Rudd's election in 2007, Albanese turned his attention to same-sex marriage. 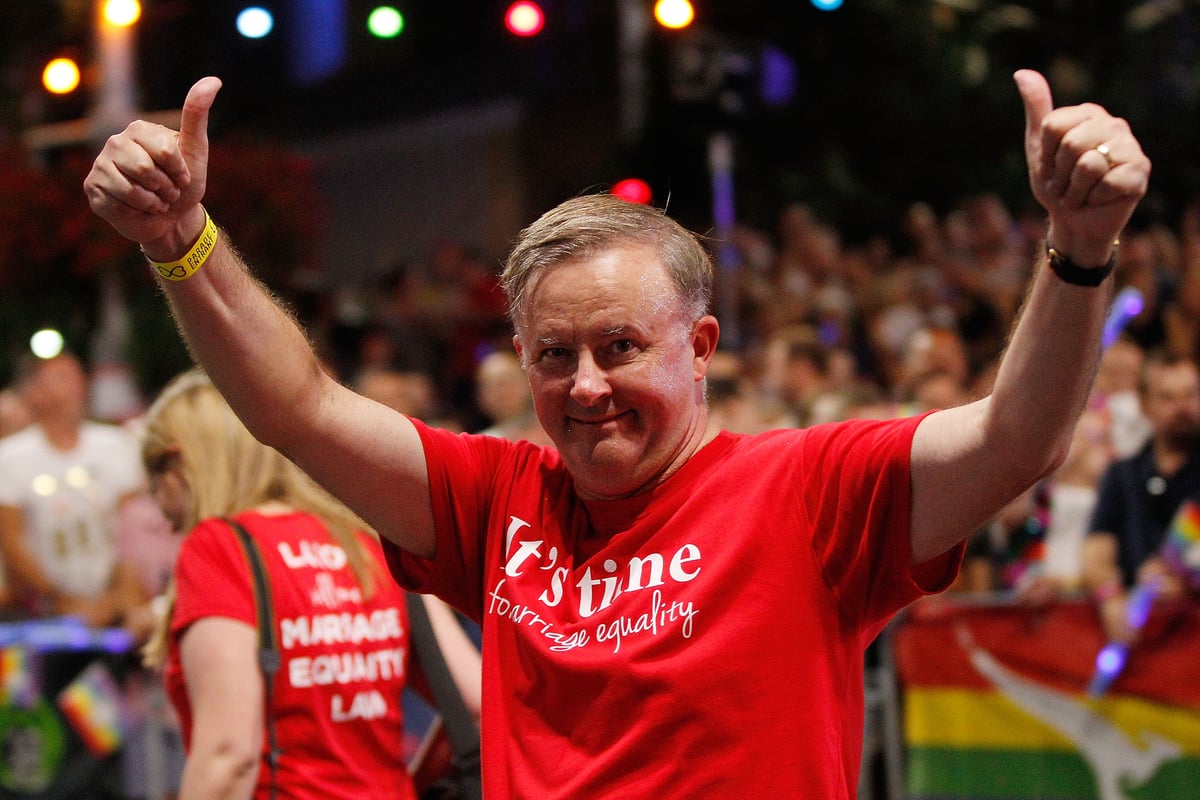 Anthony Albanese during the 2016 Sydney Mardi Gras Parade. Image: Getty. Albanese was emotionally upset by the Rudd-Gillard-Rudd bloodbaths, although after Rudd's brief return to leadership in 2013 he became deputy prime minister.

After Labor lost office, he and Shorten contested the leadership. He won the popular vote, but did not have the caucus numbers to beat Shorten.

The Labor stalwart threw his hat into the ring again after describing the 2019 election outcome as a "devastating result" for the Australian Labor Party.

"I believe I am the best person to lead Labor back into government," he said at the time.

"What you see is what you get with me," he said. "I'm a bit rough at the edges, but I think that Australians don't want someone who just utters talking points."

Albanese, who came second in the last leadership ballot in 2013, believes Labor needs to listen to people in the outer suburbs and the regions to understand why the party had lost the election at the time.

"We have not sold the message well enough, I don't think, that we are interested in jobs and economic growth as the priority, as well as the distribution of wealth in our society."

Albanese has been the passionate face of Labor since 2019. He represents an inner Sydney seat and is a leading figure of the party’s left faction.

On heading into the election campaign, he said: "I feel a great responsibility to win, because I met people who are desperate for a change of government: whether for a specific reason or just in general. I think Australia can do better."

Albanese and ex-NSW deputy premier Carmel Tebutt were together for 30 years, before separating on New Year's Day 2019.

"I was devastated when that relationship ended, and it took me a while to recover. I didn't see it coming" Albanese credits his work life for keeping him occupied mentally.

As to how Albanese manages the dating world: "carefully" he said with a laugh on No Filter.

"Can't do any apps, but nor does it appeal to me frankly. Although it has been written that is how I met someone, but that was a joke!" 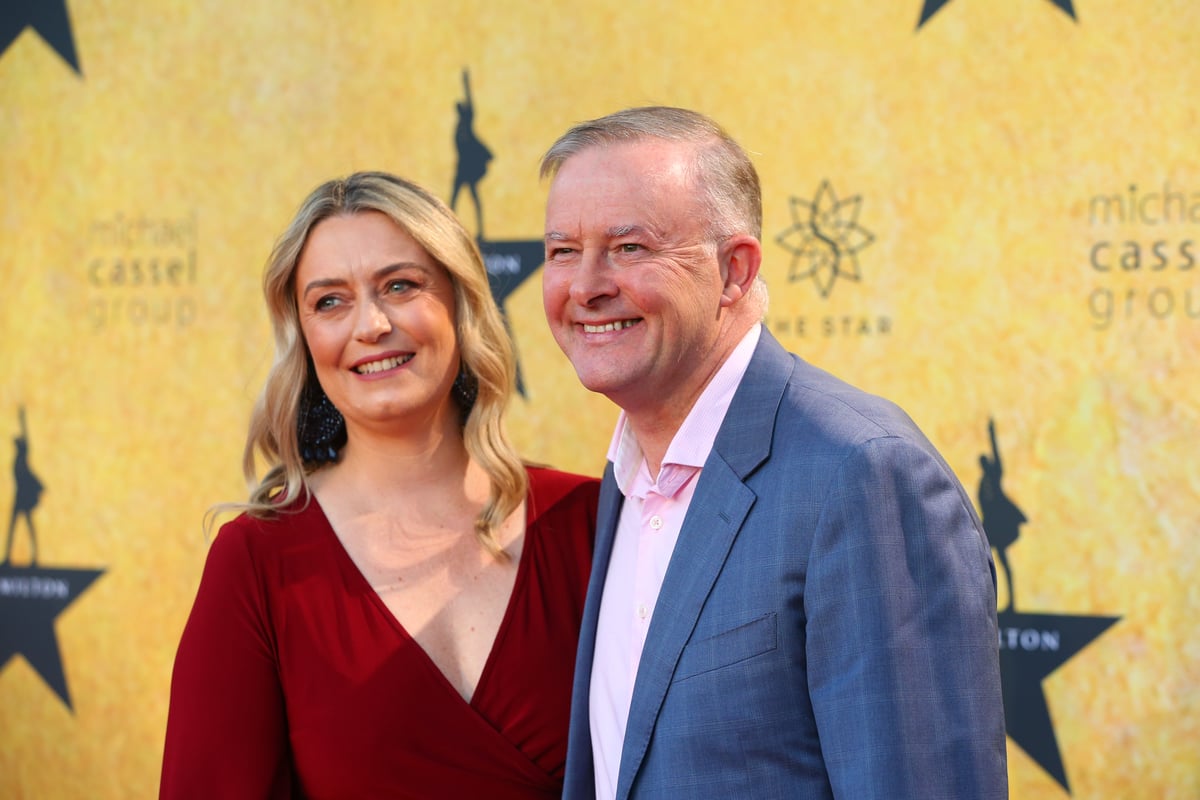 Anthony Albanese and Jodie. Image: Getty. Albanese's met his current partner Jodie at a dinner function, the two having a shared love for the South Sydney Rabbitohs football team.

"She got in touch with me, sending a message saying: 'we have a lot in common. I like the Rabbitohs, we live in the same area, I support Labor and we're both single!'"

Along with 21-year-old son Nathan, Albanese also has his beloved dog Toto. 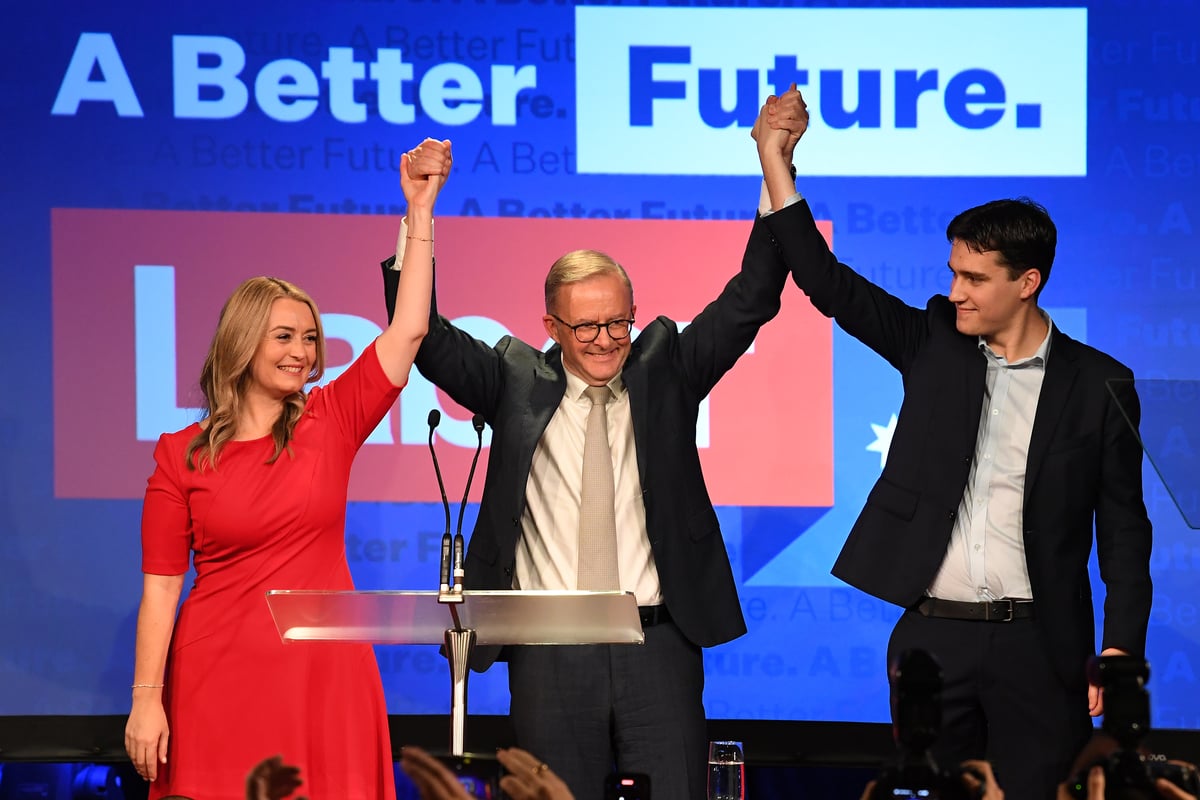 Speaking to Adelaide Now about Toto, Albanese said: "When I’ve been away for a bit - in parliament or out on the road - there’s nothing quite like getting back and opening the front door. In that moment of wild joy, Toto is poetry in commotion."

He continued: "There's a beautiful, open-hearted honesty about dogs that brings out the best in us, and any person who spends time in the company of a dog is all the better for it. Toto is loving, loyal and she's great company."

To listen to Mia Freedman's No Filter interview with Anthony Albanese, click here.

came up with a story: she had met, fallen in love, and married a man in Italy who had then died in a tragic car accident before her son was born

I've never heard of that. What a great idea. I read somewhere else where she took his surname and wore a ring.
N
nessie 7 months ago

Reply
Upvote
4 upvotes
Anthony Albanese has achieved so much being raised by a single mum . He should feel so proud of himself . I hope my son will achieve the best he can also being a single mum as well . It's not an easy job when u have to take on the female role and the male role .
Resources
Very Peri
Skin
News
General
Opinion
True Crime
Politics
Sport
Explainer
Entertainment
Celebrity
Reality TV
Movies
TV
Books
Rogue
Royal
Lifestyle
Beauty
Fashion
Weddings
Home
Wellness
Health
Fitness
Travel
Food
Family
Before The Bump
Pregnancy
Baby
Kids
Teens
School
Parent Opinion
Work & Money
Money
Finance
Career
Lady Startup