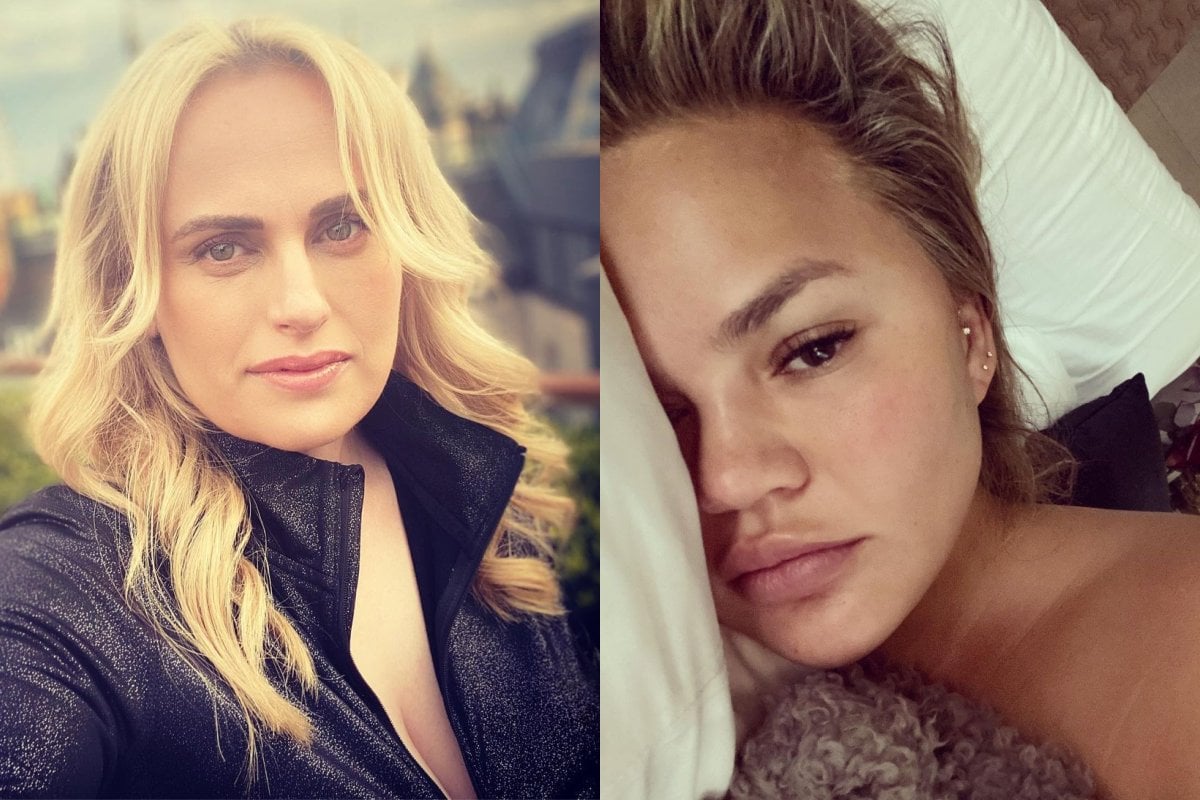 Rebel Wilson recently opened up about her struggles with fertility.

Speaking on the topic for the first time, Wilson briefly shared that she received some "bad news" about her fertility on Monday.

"I got some bad news today and didn’t have anyone to share it with... but I guess I gotta tell someone. To all the women out there struggling with fertility, I feel ya," the 41-year-old actress wrote on Instagram.

"The universe works in mysterious ways and sometimes it all doesn’t make sense... but I hope there’s light about to shine through all the dark clouds."

Watch: The facts on fertility. Post continues after video.

She then shared an update after she received an influx of messages from her almost 10 million followers.

"***UPDATE*** just wanted to say I woke up this morning and read through everyone’s kind messages and stories about their journeys and I can’t tell you how much that meant to me and has made me feel a lot better today," Wilson said.

"Social media for the win here in terms of creating connection when I was in a very lonely place. So thank you everyone."

As infertility isn't spoken about nearly enough (despite affecting one in six Australian couples) it can be lonely and isolating to go through it. So hearing other peoples' stories can make the world of a difference.

Many celebrities, like Wilson, have been open about their own struggles with fertility. Here are 10 other high profile women sharing their experience.

"You guys know (or now you do) that John and I went through IVF to get pregnant with Luna and Miles," she wrote on Instagram. "What you might not know is how isolating fertility issues can be."

In 2018, Teigen opened her experience with in-vitro fertilisation (IVF).

"Ours didn’t work the first time, and it was devastating," she told The Cut. "You realise that a lot of it is luck, and you can’t blame things on yourself. It’s so easy to try to figure out what you might have done 'wrong' and do the opposite the next time."

"The first round I did IVF, when it didn’t work, I remember thinking, 'Oh, I was on my feet too much, and that’s why.' You just look for anything to blame, especially yourself," she continued.

In 2010, Nicole Kidman and her husband Keith Urban welcomed their second child, Faith Margaret, via surrogate. The following year, in 2011, Kidman spoke about it on 60 Minutes.

"Having given birth and then... seeing my child being born this way, the love I felt for our surrogate... she was the most wonderful woman to do this for us," she said.

"We were in a place of desperately wanting another child and this opportunity arose for us and I couldn't get pregnant and we wanted another baby. I get emotional even talking about it because I'm so grateful to her," Kidman said.

She also spoke about how difficult the fertility journey is.

"Anyone knows the disappointment, the pain and the loss that you go through trying and struggling with fertility ... [it] is such a big thing," Kidman said.

"I've had a roller-coaster ride with fertility," she added.

Seven years after her divorce from Cruise, Kidman gave birth to her first child with Keith Urban, Sunday Rose.

Speaking to Mamamia in 2020, Jesinta Franklin explained that her journey to pregnancy wasn't easy.

"It’s been interesting because there was such a long journey to fall pregnant – and I’m so grateful to be pregnant – but I also can’t say I’ve 100 per cent loved being pregnant. I wouldn’t say it’s all been a fairy tale," she said.

Before becoming pregnant with her daughter, Tallulah, Franklin suffered three miscarriages. So during the early months of pregnancy, she wasn't whether she would make it to full-term.

“In the early days, [pregnancy] was so stressful, just because I didn’t know what was going to happen," she said. "This is my fourth pregnancy and I still don’t have a baby, so there was a lot of anxiety in the first few months. Every twinge, every feeling, everything made me worry and overthink."

In 2019, when appearing on Busy Tonight, Courteney Cox opened up about her struggles with infertility, much like her on-screen Friends character, Monica.

"I had a lot of miscarriages, and I don't think that's something that people shouldn't talk about, because... it was unfortunate but it happens," Cox said during the interview.

After years of trying for a child with her ex-husband David Arquette, it was announced that ahead of Cox's 39th birthday, the couple would try IVF one last time.

Soon after, Cox fell pregnant with her daughter Coco.

Parker and Broderick "explored a variety of ways" of having another child, including adoption, but eventually decided on surrogacy.

"Meeting your children rather than giving birth to them, it's as if, um, it's—suspended animation. The gestational experience is gone. It's as if everything else disappears for a moment, and the world goes silent and—I can't explain it except to say that nothing else existed," she told the publication.

In former First Lady Michelle Obama's memoir, Becoming, she wrote about her and Barack Obama's struggle with fertility.

"We were trying to get pregnant and it wasn’t going well," she wrote. "We had one pregnancy test come back positive, which caused us both to forget every worry and swoon with joy, but a couple of weeks later I had a miscarriage, which left me physically uncomfortable and cratered any optimism we felt."

The couple ended up relying on IVF to conceive their two daughters, Malia and Sasha.

"I felt like I failed because I didn't know how common miscarriages were because we don't talk about them," she said when appearing on Good Morning America in 2018.

In January 2020, Amy Schumer announced she had begun IVF, with the hopes of a second child, sharing a candid photo of her stomach after her first round of treatment.

"They retrieved 35 eggs from me. Not bad for the old gal right? Then 26 fertilized! Whoa right?" Schumer wrote. "For all those we got 1 normal embryo from that and 2 low level mosaic (mosaic means there are some abnormal cells but can still lead to a healthy baby) So we feel lucky we got 1! But what a drop off right?"

However, months later, in August, Schumer shared she doesn't think pregnancy will happen for her again.

"I decided that I can't be pregnant ever again," she said on Sunday Today with Willie Geist. "We thought about a surrogate but I think we're going to hold off for right now."

TV presenter Jessica Rowe has discussed her difficult journey to motherhood. In 2006, she shared that it took four attempts to conceive by IVF.

"I wanted to scream, 'I’m on IVF and I don’t know if I can be a mum... Don’t tell me how wonderful it is to be a mother! And don’t you dare complain about how tired you are,'" she said in an interview on the Today show, via The Age.

"As a woman you assume that everything is going to be okay, that you will become a mum ... but to find out I might not be able to become a mother was really confronting," she continued. "There is a part of you that does think, 'What is wrong with me?'. All around you friends are falling pregnant... when you are struggling yourself, that can be really quite hurtful."

Former supermodel Tyra Banks has opened up about her difficulties getting pregnant. In 2015, Banks explained that before she starting seriously trying, work always got in the way.

"Since I was 24, I used to say every year, 'I will have kids in three years,'" she told People. "I kept saying it over and over again. Because my business is very entrepreneurial. I’m not for hire, so I have to do everything. I kept trying to find that time for that to happen."

In January 2016, after undergoing multiple rounds of IVF, Banks and her boyfriend, photographer Erik Asla, welcomed their daughter, York, via surrogacy.

After announcing that she was pregnant with her second child, Anne Hathaway opened up about her struggles with infertility.

"I think that we have a very one-size-fits-all approach to getting pregnant," she told The Associated Press, via USA Today.

"You get pregnant and for the majority of cases, this is a really happy time. But a lot of people who are trying to get pregnant: That’s not really the story. Or that’s one part of the story. And the steps that lead up to that part of the story are really painful and very isolating and full of self-doubt. And I went through that."

carmel79 a day ago

Reply
Upvote
I finally had a child at the age of 40 after struggling to have a child. I found out i was pregnant march 2019 and had an appointment  booked in april 2019 to see my dr and had decided i was going to say lets do ivf as the fertility drugs weren't working  So i was lucky there. My pregnancy was wonderful but in the moment i was stressing about it as i was worried of losing him and i did wonder if id ever be a mum. But because i had him at such a late stage i hope he doesnt feel he missed out on having siblings
News
General
Opinion
True Crime
Politics
Sport
Explainer
Entertainment
Celebrity
Reality TV
Movies
TV
Books
Rogue
Royal
Lifestyle
Beauty
Fashion
Weddings
Home
Wellness
Health
Fitness
Travel
Food
Parents
Before The Bump
Pregnancy
Baby
Kids
Teens
School
Parent Opinion
Work & Money
Money
Finance
Career
Lady Startup
Relationships
Sex
Dating
Separation
Friendship
Family
Real Life
Couples