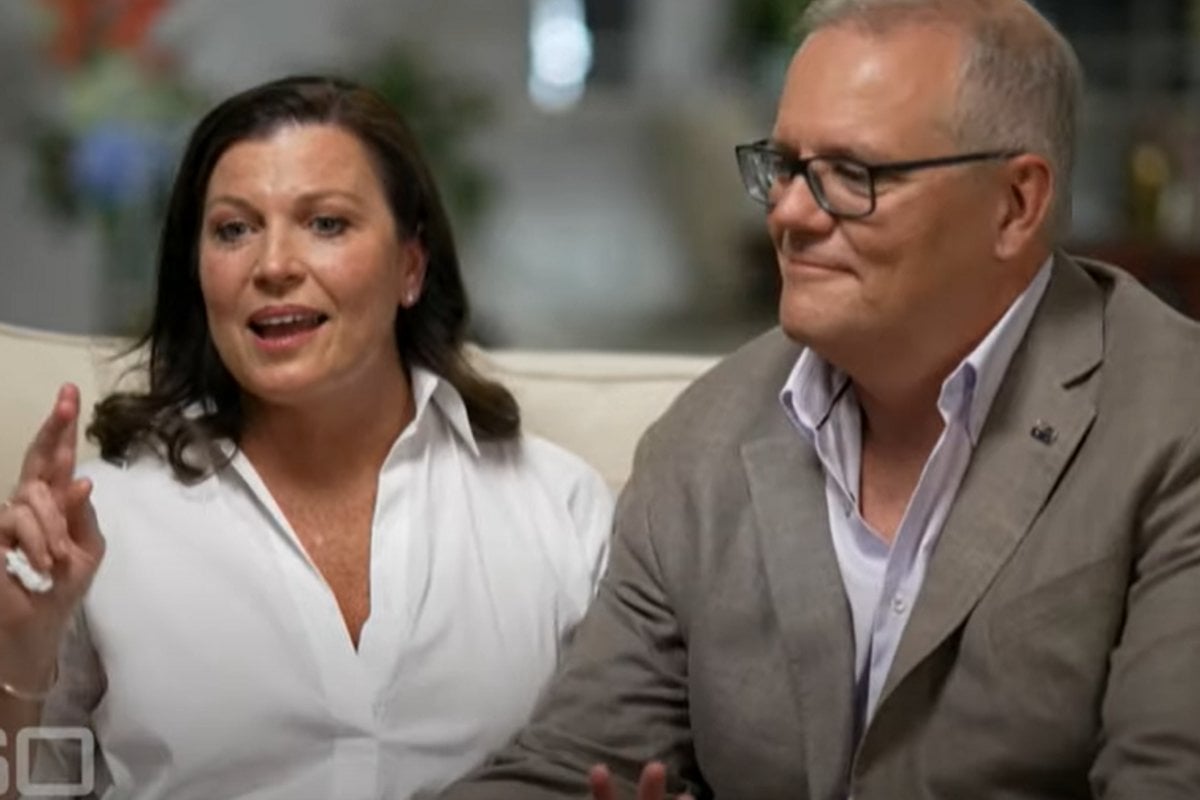 Warning: This post mentions sexual abuse and may be triggering for some readers.

Last night we watched as Prime Minister Scott Morrison and his wife Jenny sat down for a rare 60 Minutes interview, ahead of the next federal election.

Speaking to guest reporter Karl Stefanovic at Kirribilli House in Sydney, the Morrisons addressed some of the Prime Minister's recent headline-making moments, including those leaked 'psycho' text messages and the pair's meeting with former Australian of the Year, Grace Tame.

We were also given a glimpse at the Morrison's family life behind the scenes, which included a... questionable ukulele performance by the Prime Minister himself.

Here are five moments you missed from Scott and Jenny Morrison's 60 Minutes interview.

1. Scott Morrison brought out a ukulele and started singing.

We have to start here because it's all the internet has been talking about for the past few days.

During the interview, Karl Stefanovic sat down around a dining table with the Morrisons including their two daughters, Lily and Abbey, when the Prime Minister pulled out a ukulele and started singing.

Performing a cover of 'April Sun In Cuba' by New Zealand rock band, Dragon, Morrison sung the lyrics, "Take me to the April sun in Cub" before admitting, "... I can't remember the words".

.@ScottMorrisonMP has shown off his ukulele skills in an upcoming @60Mins interview with Karl! #9Today pic.twitter.com/nNZl8SCswW

Many were quick to call out the performance on social media, which was shared as a preview days ahead of the interview.

Some even questioned if Morrison learnt how to play the ukulele while holidaying in Hawaii in 2019, a time when parts of the country were being ravaged by catastrophic bushfires.

Speaking about the infamous trip, Jenny said in the interview, "I am more than sorry if we disappointed."

Stefanovic later brought up Hawaii when asking the pair what they might do if they lose the next election.

"You could go to Hawaii!" he quipped.

Elsewhere in the interview, Jenny said she was left 'disappointed' after she and Scott Morrison met with former Australian of the Year, Grace Tame, last month at The Lodge.

Speaking about the encounter with Tame - who was criticised for not smiling - Jenny called out the need for "manners and respect".

"I just found it a little bit disappointing, because we were welcoming her into our home," she told Karl Stefanovic.

"I just wish the focus had been on all the incredible people coming in. I respect people that want to change things, stand up for their beliefs and are strong, but I still think there are manners and respect."

In a rare interview with #60Mins, Jenny Morrison says she was left ‘disappointed’ after a tense meeting with former Australian of the Year Grace Tame in Canberra earlier this year. pic.twitter.com/V1fTFGmgaA

When asked whether she wants her daughters to look up to advocates like Grace Tame, Jenny said, "I want my daughters to grow up to be fierce, strong, independent, amazing people.

"I think they can still do that and show kindness to other people and be polite and have manners."

3. Jenny Morrison "felt sick" after hearing about the 'psycho' texts.

Jenny also weighed in on a leaked text message sent by an unnamed cabinet minister which labelled the prime minister a "complete psycho".

"When I heard that question, I actually felt sick to my stomach," she said.

"I felt sick to my stomach because they were talking about someone that I really care about.

"And I just thought it was such a poor question with such bad intent, that those people just have no idea how it would affect my family. I have grown daughters that are going to high school.”

“I actually felt sick to my stomach.”

Down in the polls, Scott Morrison hoped an address to the National Press Club two weeks ago would rescue his re-election. His wife was watching at home when it was derailed by a reporter’s question. #60Mins pic.twitter.com/xz8BTSvFBQ

4. Scott Morrison broke up with Jenny while they were dating.

Scott Morrison met Jenny when they were just 12 years old at Luna Park before running into each other again at a Christian youth camp.

The pair started dating as teenagers but it wasn't all smooth sailing.

"He broke up with me because he was keen on another girl," Jenny told Stefanovic.

"Oh, I was an idiot. It was a stupid decision. We fixed it pretty quick," replied Morrison.

When asked what she would go back and say to her 16-year-old self, Jenny joked she'd say "Run!"

"It's been a long time but I know him better than he knows himself."

During the interview, Jenny was asked about a conversation she had with Scott Morrison where she asked him to imagine if their daughters were in the same situation as former staffer Brittany Higgins, who claimed she was raped in Parliament House.

"I was speaking directly to him. I really want to know that our girls are perfectly safe to be working in a building like that, or any building," she said of the conversation.

When asked if it took a conversation with her for Scott Morrison to "really get it", Jenny replied, "I think Scott totally gets things."

"He’s all about problem-solving. That can come across sometimes as serious, uncaring… or lacking empathy. But it isn’t that at all. It’s seriously focused and task-oriented."

When political staffer Brittany Higgins revealed allegations she’d been raped in Parliament House, Scott Morrison said it took a conversation with his wife to make him act. For the first time, Jenny Morrison revealed to #60Mins what she said. pic.twitter.com/talHdLN8Ln

Reply
Upvote
The utter desperation in Morrison and his government is the reason they are resorting to lies and innuendo and will get worse as the election approaches and the magnitude of the coming annihilation of the Liberal party becomes even more clear, but it may well be a good thing by cleansing them of the extreme right-wing ideologues currently controlling and directing their policies, we can only hope.
M
mumma-cat 6 months ago

Reply
Upvote
I have worked out why Morrison’s wife felt sick in the stomach. Their well hidden secret on his personality was being exposed. Not  by the opposition but by their own party.  His pin up girl,  of all people,  saying he is a horrible, horrible person. Note Glad didn’t deny it, only had one of her recent memory lapses. I think his own party has had enough of him, they would sacrifice the big win to be rid of him.
S
suz 6 months ago