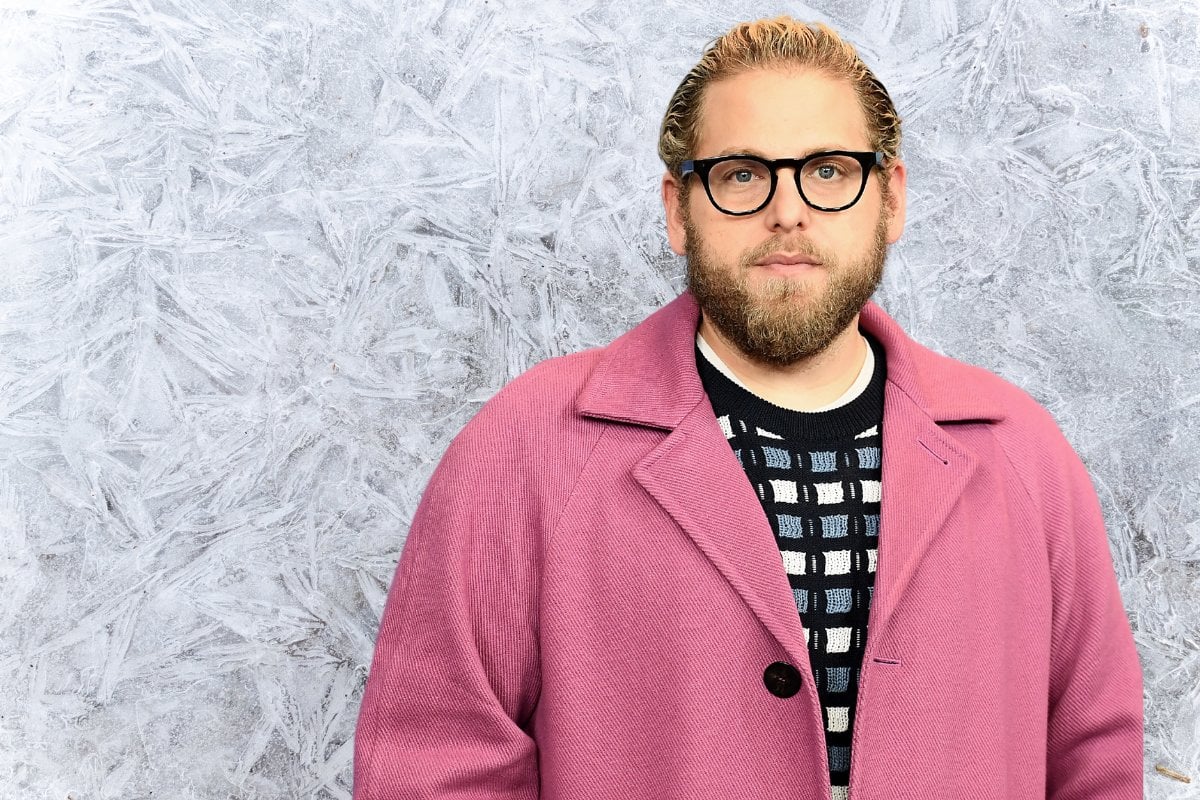 If Jonah Hill's career was a vinyl record, each side would play a very different type of music.

The A side would be the greatest hits of his career, from a break-out gig in the iconic comedy Superbad to starring roles in Get Him to the Greek and 21 Jump Street. All the way to more dramatic fare such as Moneyball and The Wolf of Wall Street , both of which earned him Academy Award nominations.

The B side, on the other hand, would offer up a very different tune. One where the actor's body is publicly mocked and shamed over the course of decades. His weight derided and questions like 'what's it like to be the fat guy?' thrown out during his many press tours.

“I became famous in my late teens and then spent most of my young adult life listening to people say that I was fat and gross and unattractive,” The 37-year-old actor once said during an appearance on The Ellen DeGeneres Show, when talking about how his body was described in the world of entertainment and media.

In a now-viral 2014 interview clip, Jonah was asked if he was still considered 'the fat guy' in Hollywood circles, a question he refused to answer.

why the fuck would u even think it's okay to say this i'm so mad pic.twitter.com/je0Wh12Ylv

Just a few years earlier, in 2012, Billy Crystal made a targeted weight joke at Jonah's expense during the Oscars, pointing out the actor in the audience while singing "It's great you shed weight. But I think you should know, there's cupcakes after the show."

Jonah, who was nominated in the Best Supporting Actor category and seated near the stage next to his mother, couldn't hide the broken look on his face as the camera panned to him and the audience laughed at his expense.

This week Jonah made international headlines when he posted a response on his Instagram to shirtless paparazzi photos the Daily Mail published of him, addressing the ridicule that had followed him throughout his career.

"I don’t think I ever took my shirt off in a pool until I was in my mid-30s even in front of family and friends," the actor wrote alongside a screenshot of the outlet's article. "Probably would have happened sooner if my childhood insecurities weren’t exacerbated by years of public mockery about my body by press and interviewers."

"So the idea that the media tries to play me by stalking me while surfing and printing photos like this and it can’t phase me anymore is dope. I’m 37 and finally love and accept myself."

His statement set off a string of headlines centering on the importance of pushing back against the shaming of male bodies, a dangerous topic that has only been skimmed over lightly in the past.

It was a brave statement for him to make, and one that no doubt will play over in the minds of both boys and men who are facing a similar avalanche of shame around how their bodies are viewed.

Jonah Hill is not the only male star who has used their personal experiences to highlight the ongoing body shaming that men in the public eye suffer from. But due to a variety of reasons, it's a call for change that has never garnered any real momentum or shaped meaningful action.

In 2018 Ben Affleck responded to a New Yorker article he believed was fat-shaming him, with references to “his gut pooching” and “a blue-gray towel wrapped protectively around his midsection—recalling a shy teen at the local pool" alongside images of him shirtless at the beach.

During his Hollywood reign as an actor and talk show host, James Corden has also voiced his frustrations around how plus-sized bodies are depicted on screen.

"I could never understand when I watch romantic comedies. The notion that for some reason unattractive or heavy people don't fall in love," he said in an interview with Rolling Stone. "If they do, it's in some odd, kooky, roundabout way - and it's not. It's exactly the same."

Also in 2018, an on-screen exchange between co-stars and friends Seth Rogen and Joseph Gordon-Levitt on Drop the Mic set off a conversation highlighting the public ease that comes with shrugging off male body shaming.

In the segment, Joseph Gordon-Levitt rapped to Seth Rogen "You're fat, sorry, I'll just say it plainly I mean, you're not orca fat, you're not insanely overweight just too many snacks and doobies but enough so you can't really be in action movies. Got to diet, man, or try a juice fast or at least just stop eating James Franco's a**.

To which Seth responded, "I'm chubby, I'm balding, I'm lazy, I smoke pot, so tell me, how am I a leading man and you're not?"

It was an exchange made in humour by two friends, but still, there's a thread of truth in Seth's response that goes a long way to explaining why such an important topic is so easily pushed aside.

The truth is, when Seth said "I'm a leading man' he was correctly referencing the fact that Hollywood has a long history of making room for men with different body types and allowing their stories to be told and celebrated.

For a long time, movie studios and TV networks have embraced 'the every man'. Actors who didn't match the exact physical blueprint of the tall, muscled movie stars of days gone by, but men with charm, charisma and comedic timing.

Who were also afforded the opportunity to write and produce their own material, therefore leaning into their natural talents and becoming highly bankable leading men.

Giving these men leading roles in comedies over the years, and paring them against love interests played by conventionally thin and attractive women, has become rampant in movies over the years. Particularly in the realm of comedy to the extent that it has even been christened the 'Schlub-Goddess' trope.

Think Seth Rogen opposite Rose Byrne in Neighbors, Katherine Heigl in Knocked Up and Charlize Theron in Long Shot. With those last two movies, in particular, leaning hard into the Schlub-Goddess trope as the basis for humor around the relationship.

Other actors who have also spoken about fitting into this Hollywood 'every man' idea, and who have also featured as the leads in big-budget movies in the same vein as Jonah Hill, include Ricky Gervais, Kevin James, Jack Black, James Corden himself and Jason Segal.

The latter who successfully used this trope in his hit movie Forgetting Sarah Marshall, pairing his schlubby character of Peter Bretter against the likes of Kristen Bell and Mila Kunis, thereby blatantly building that well-worn trope into the comedy's narrative.

The list of female stars who have been publicly and brutally shamed for their weight over the years,  and who have lost work because of it, could fill enough books to overwhelm a library.

In addition to this, it's only in recent years that women who identify as plus-size have been given the chance to headline big studio movies, with Melissa McCarthy being the name at the top I(and one of the only) of this field.

One of the highest-earning stars in the world, the actress has spoken honestly in the past about growing up not seeing women like herself on-screen and how comments around her body negatively affected her career.

"I just find it dumb and boring. I really do," she said to AARP.  "No one’s asking a man, how do you keep your legs in shape? Which I’ve been asked. I think every time we categorize people — by weight, by race, by gender — we put them in boxes and it’s not a good thing for the world."

"The letters I really love are from young actresses who were worried they had to fit a certain look. They say I've opened it up. And I don't just mean plus-size girls," she told Us Weekly."I know I am not the 'norm.'"

In another display of discrepancy when it comes to how men and women's bodies are treated in the public eye, while men can be shamed for gaining weight their bodies are never concentrated on to such an extreme effect that when they lose weight they are derided for giving into pressure and 'letting the team down'.

A fate women in the public such as Rebel Wilson and Adele have experience at an extreme level in recent years.

In this case, two ideas can be true at the same time.

It's true that when it comes to body shaming both in pop culture and in the real world, women have been given a much harder path to navigate.

It's also true that the shaming and ridicule surrounding men's bodies is a dangerous concern that requires both action and conversation, a topic that should be allowed to stand on its own and will require a different plan of attack.

Reply
Upvote
1 upvotes
Meanwhile Asian men and Black women cannot get a leading role no matter how thin and cut they are and I can probably count on one hand the number of writers who appear to care about that. The unintentional irony is rich indeed

Reply
Upvote
1 upvotes
Let's not forget that women are body shamed for being too thin as well (think Nicole Richie, Calista Flockhart, Sarah Jessica Parker). The equivalent for men might be being less muscular? - and yes, lots of shaming going on there, too.
I never understood why women in Hollywood always prefaced their stories with "Men never....", because men have gone through this, too. For a period of time, men were not supposed to care how they looked or what was said about them and were unable to respond to body shaming for fear of sounding too feminine - absolutely terrible for two totally different reasons.
I'm so glad that body shaming is becoming unacceptable regardless of who it is aimed towards.

Reply
Upvote
1 upvotes
@guest147 It's curious. Without a doubt, overly thin women are quite publically shamed.
I'm struggling to recall an overweight actress fielding such a jarring question about their weight. I've seen actresses say something self-deprecating about their weight and then field a question about being overweight, but a question out of the blue like this, I don't think so - deemed too offensive, I think. There would be a "How dare you?" online backlash and, possibly, a cancellation of the journalist.

Reply
Upvote
@gu3st you’ve seen every single magazine cover ever though, right?
One of the main reasons you don’t see this happening in interviews with women is that fat women don’t get interviews. Jonah Hill has been famous for decades and no, he definitely shouldn’t be body shamed. But which female actress has had an equivalent career at an equivalent size? The only two plus sized women in Hollywood are Rebel Wilson (celebrated for her recent weight loss) and Melissa McCarthy, both of whom had significant comedy careers before hitting the mainstream. And if it wasn’t for the movie Bridesmaids neither would be known at all.
News
General
Opinion
True Crime
Politics
Sport
Explainer
Entertainment
Celebrity
Reality TV
Movies
TV
Books
Rogue
Royal
Lifestyle
Beauty
Fashion
Weddings
Home
Wellness
Health
Fitness
Travel
Food
Parents
Before The Bump
Pregnancy
Baby
Kids
Teens
School
Parent Opinion
Work & Money
Money
Finance
Career
Lady Startup
Relationships
Sex
Dating
Separation
Friendship
Family
Real Life
Couples