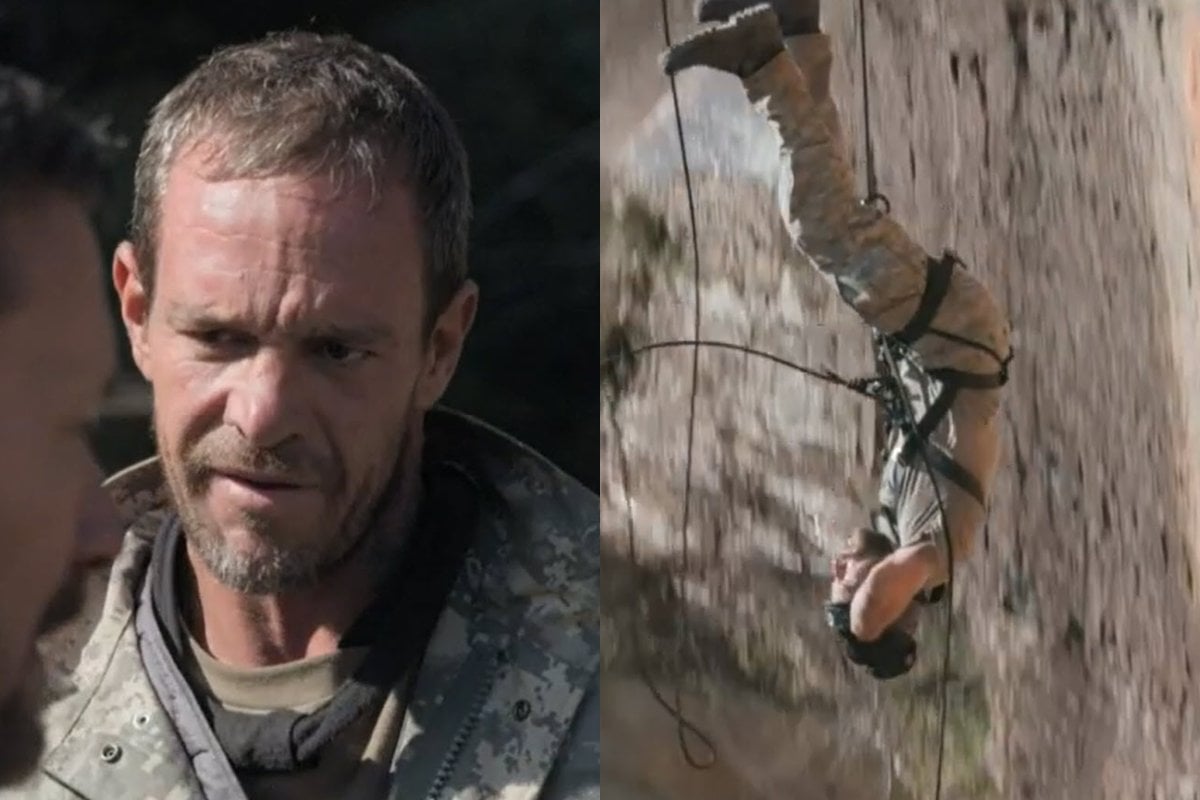 Koby's got another wild life story, this time about how he became addicted to pain medication after breaking his back twice while surfing.

He then starts moving his body in a way I can only describe with an incredibly niche SpongeBob reference:

My life is 80 per cent SpongeBob references if I'm honest. Image: Channel 7.

One of the angry British men walks over to their front door, calmly, opens it without any drama and then... SCREAMS AT THE TOP OF HIS LUNGS.

The 'angry' part of the angry British men is alive and kicking!

The celebs are placed in pairs, their 'oppo' who they must 'get to know'.

Jett is clearly absolutely thrilled at being partnered with Koby, who is already asking him whether he reckons he could beat him in a race.

For 24 hours, the pairs can't leave each other's sides.

This is super fun for Heath who has to wait... patiently... for Sam to use the toilet. 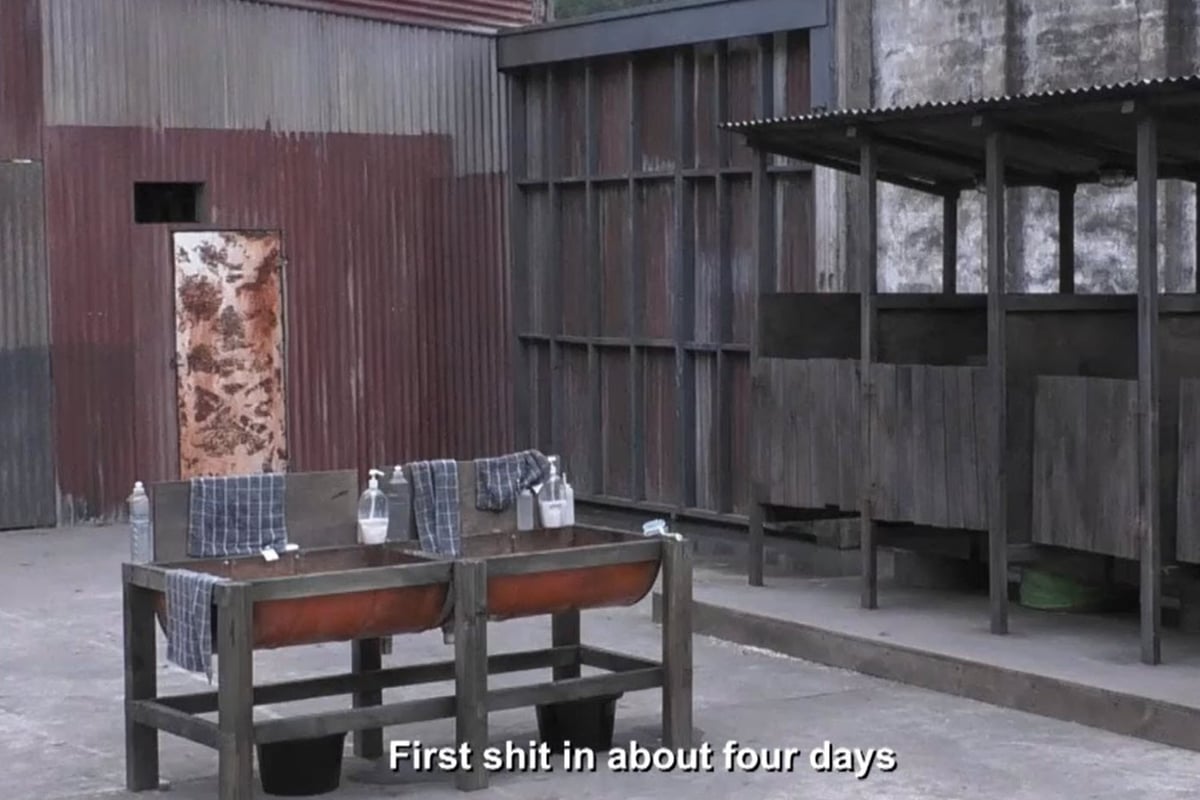 In no world did we need to know this. Image: Channel 7.

But not even learning about Sam's lack of bowel movements is as disturbing as the revelation that Koby does not know what Pokemon is.

Isabelle has taken herself to the medical room, which means the reappearance of Nice Man and close personal friend of mine, Dr Dan.

She's injured her leg, but it's not bad enough to pull her out of the course yet.

Her and Koby have one, very short, very casual conversation and then... she voluntarily withdraws.

She barely gets the words out of her mouth when one of the angry British men is like YEAH NAH YOU'RE NOT DOING THAT. Too bad she... is. 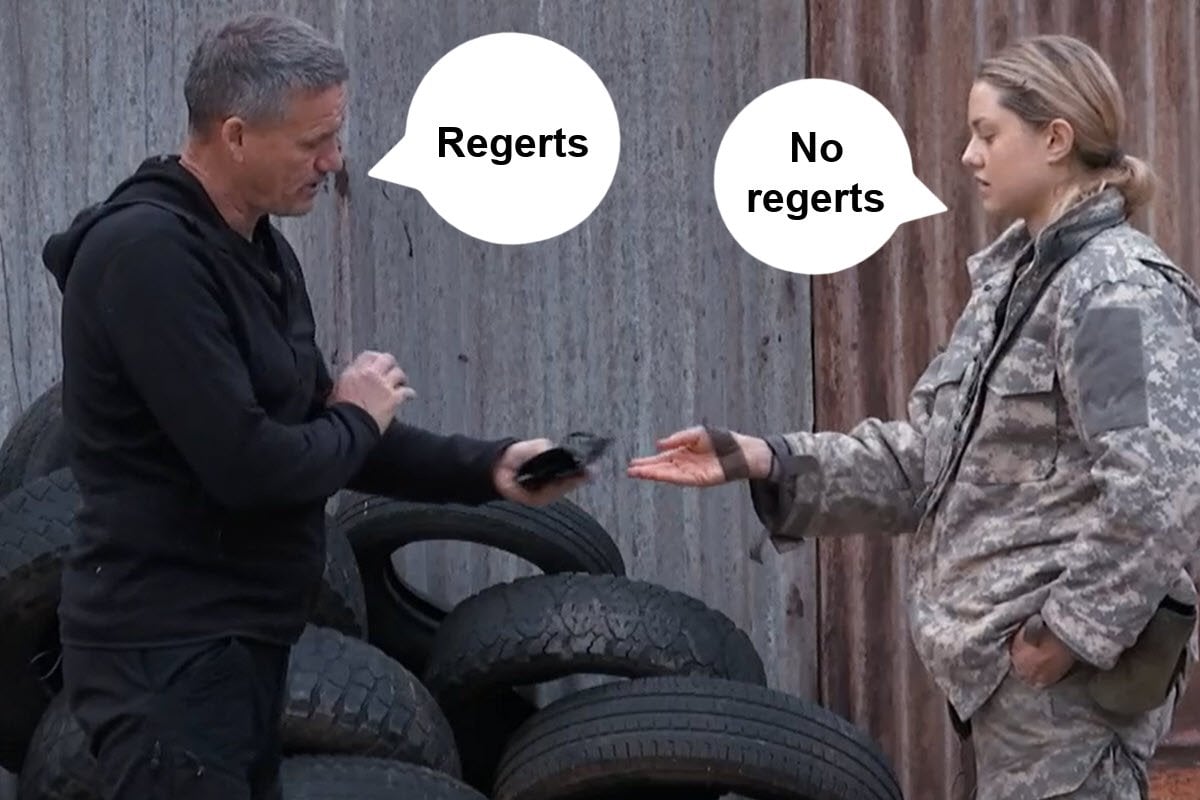 She hands him her armband and heads off, with #noregrets.

This leaves poor John with no partner, leaving him, as Koby eloquently says, "f**ked, bro".

The first challenge of the day sees the pairs, Johnny-no-mates and various angry British men running down rail tracks until they're suddenly attacked by LITERAL EXPLOSIONS.

The teams must build stretchers and carry out the injured 70kg humans sandbags to a safe point 10KM AWAY in under two hours.

Koby and his back are like 'nah, these injured sandbags aren't worth it'. Fair, but try telling that to their poor sandbag families!

He takes off his armband and withdraws, even with Jett yelling "WE NEED YOU BRO". But with Koby gone, Jett and John can partner up which means... they didn't really need him. The sentiment was nice, though.

So long Koby. I personally will miss hearing your absolutely wild life stories, and the faces of bewilderment when you say you're the best at push-ups.

Who will yell at everyone about stodgy porridge now?

Meanwhile, everyone else puts together very poorly constructed stretchers, causing their injured sandbag people to drag along the ground.

TREAT THESE SANDBAG PEOPLE WITH THE RESPECT THEY DESERVE FFS.

Everyone tries to fix them, and they look like me when I am trying to fold a fitted sheet. 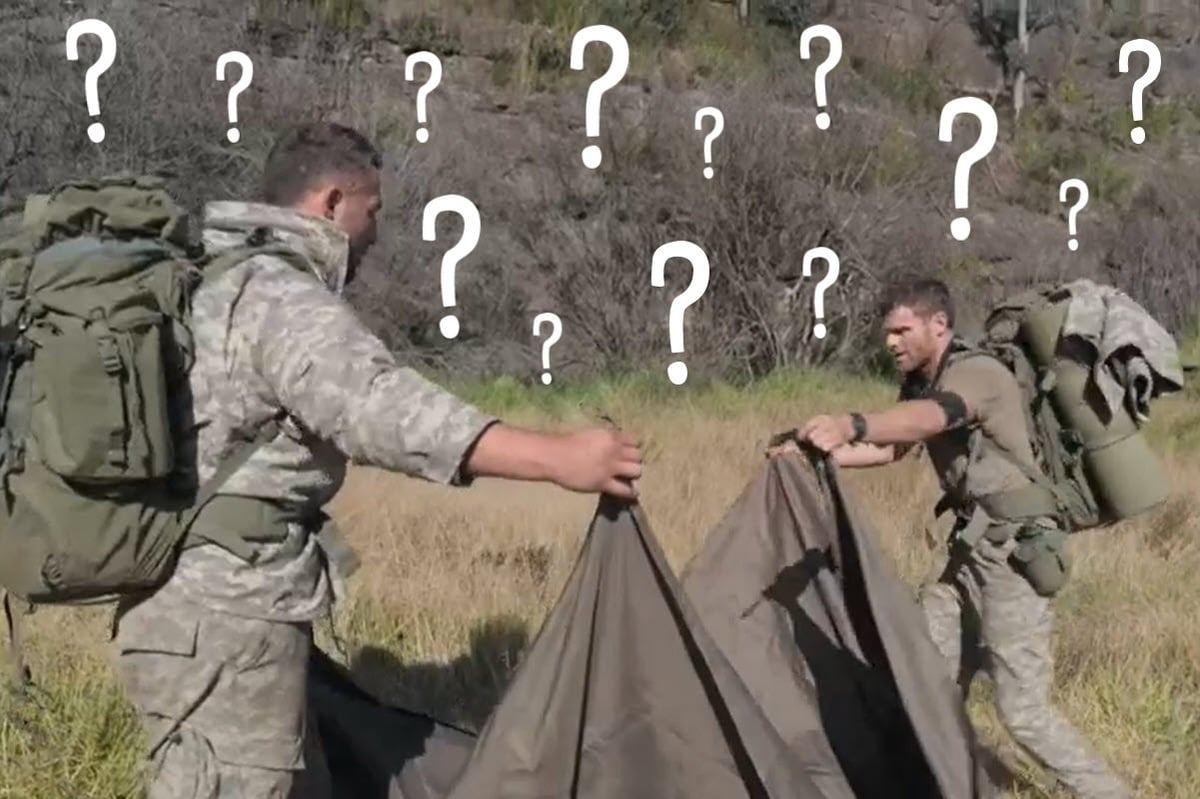 Dan and Jess get off to an early lead, followed by Jana and Mark.

Jett and John's stretcher is still... questionable, but it works enough for them to get underway, leaving Sam and Heath as the only ones left trying to figure out what is effectively... making a bed.

At the halfway point, Jess is starting to lose it. She's on the verge of quitting, and it's only the encouragement from Dan and the... frustration from an angry British man who keep her going.

Jett and John take the lead, but before long Sam and Heath have overtaken... everyone. I guess not being able to make a bed is not a big deal when your brute strength and endurance can carry you for the rest of the challenge.

In the end, all the teams complete the challenge on time and pass. No word on if the sandbags survived or not, though.

Back at camp, everyone is flirting with Dan and his abs. 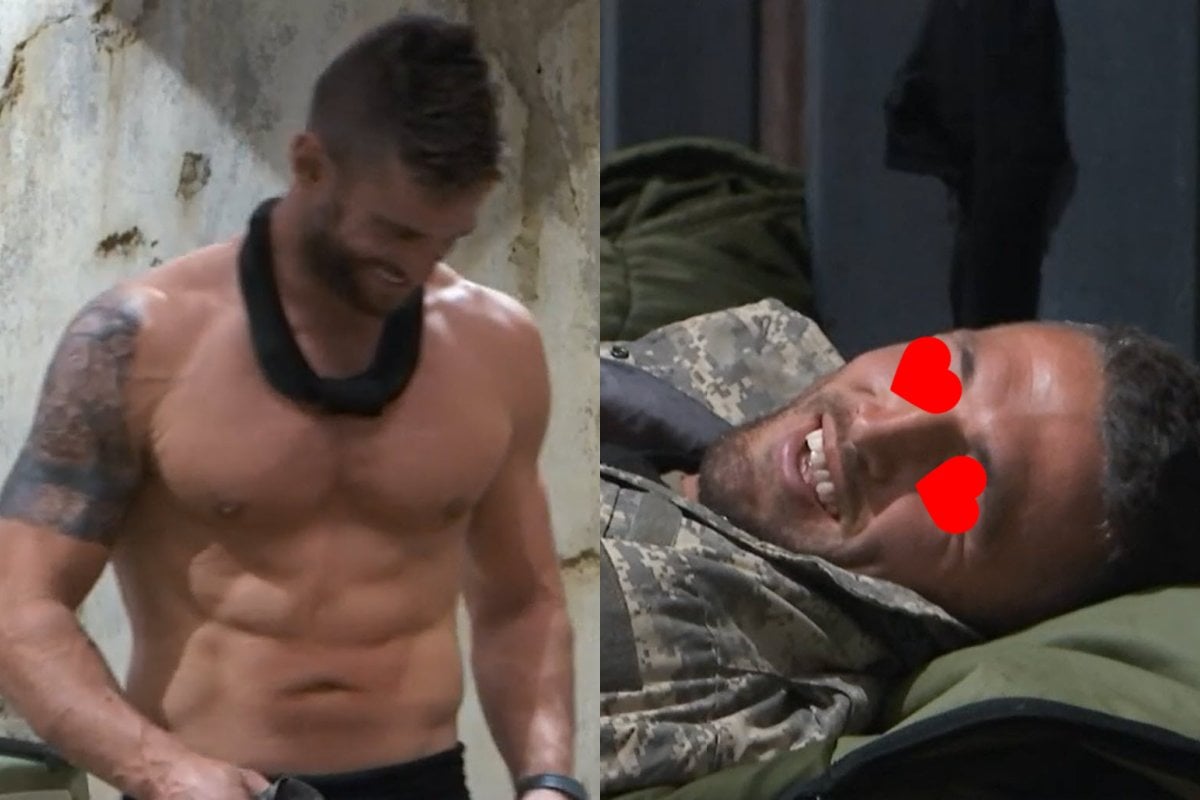 Jess is again considering quitting, but she's called in for interrogation before she gets the chance.

Angry James Bond says her default mindset right now is 'I can't', and she needs to change it into 'I can' quick or he'll take her armband off her.

WE SIMPLY CAN'T AFFORD TO LOSE ANOTHER RECRUIT TODAY.

THERE ARE STILL MULTIPLE EPISODES TO GO. 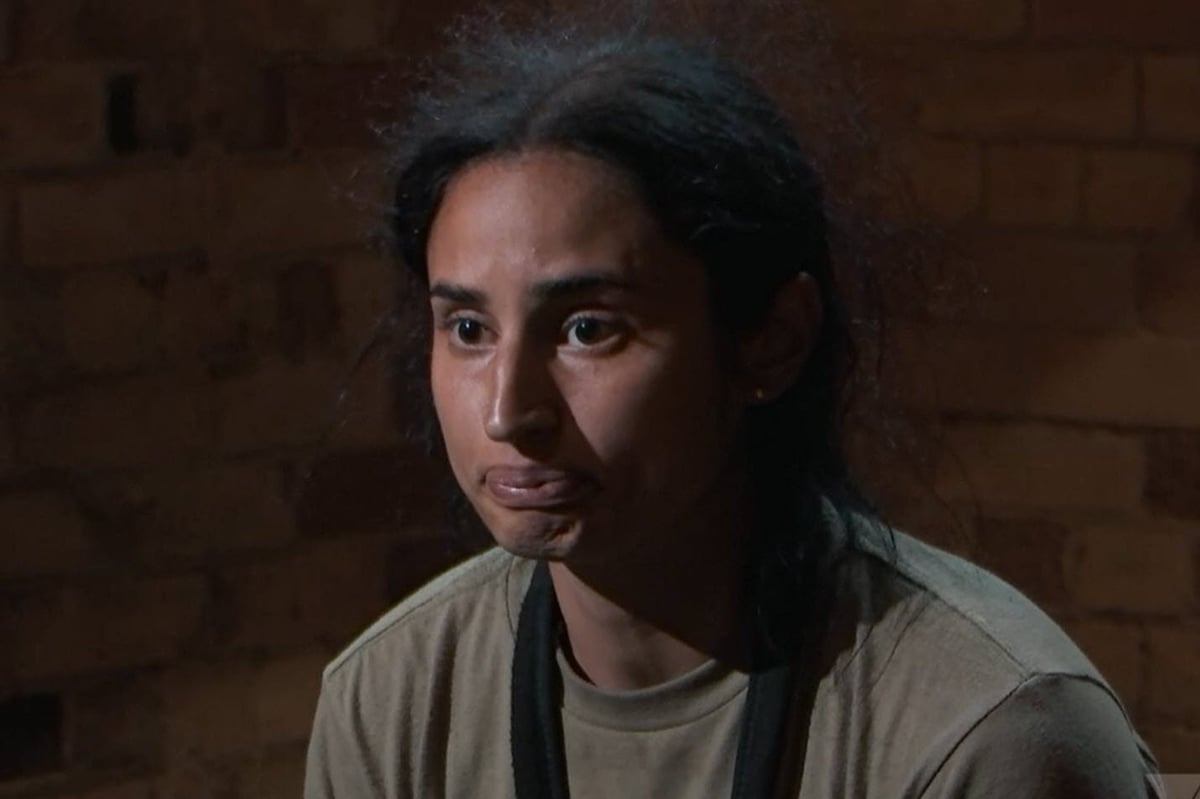 SORRY BUT YOU MUST STAY. Image: Channel 7.

It leads him and Sam to a discussion about concussions in contact sports, and Sam says while he was playing NRL he was warned his brain was 'heading the way' towards MS. He gets his brain scanned every six months to check for degeneration.

Them and their brains are shuffled into cars again, for a task about 'putting their lives in each other's hands'.

In their pairs, the recruits must do a tethered fall from the edge of a 110m cliff. The recruit at the bottom of the cliff has to pull the break rope as their partner hurtles toward the ground REALLY FREAKING FAST.

First up, Jess has to break Dan's fall. There's a 30kg difference between them so that seems... totally fine.

I actually gasp at how fast he drops. 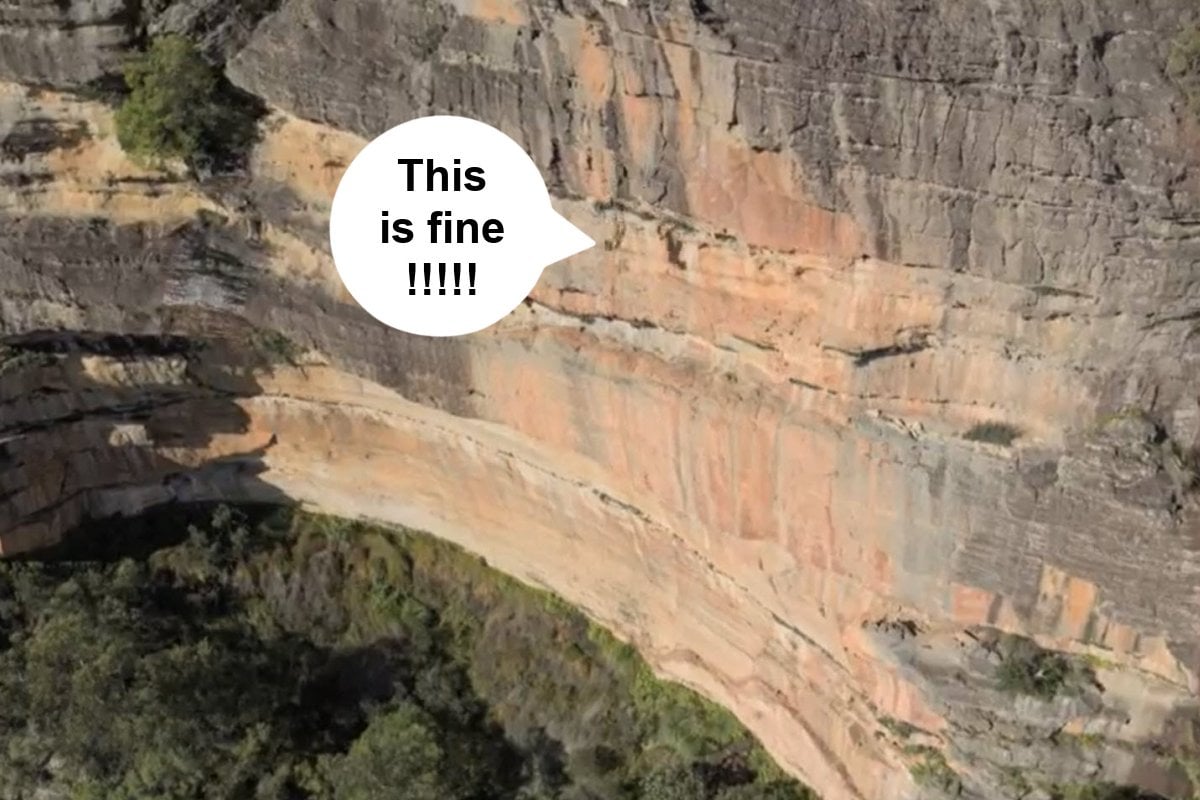 Next, Jett's body scrapes the rocks on the way down and nearly takes out John with a falling water bottle.

Sam is break man for Heath, but he immediately loses his footing so Heath free-falls until the last moment.

THIS IS ABSOLUTE CHAOS.

I LOVE AND HATE EVERYTHING ABOUT IT AT THE SAME TIME.

Last up is Jana and Mark, and Mark says the best way for him to get on with things is to "shut up and let go". Now is probably not the best time for that specific pep talk.

Mark releases the rope too soon, but catches her in the end.

Happy days! No celeb deaths on our watch!

At the accommodation, John decides to bring up Mark's time on... a dating show.

(I just Googled it and he was on a 2007 US dating show called Age of Love where women in their 20s (kittens) and women in their 40s (cougars) competed to date him. OH MY GOD???? IT SOUNDS SO BAD. Please tell me the episodes exist somewhere on the internet???)

He's then taken from one awkward interrogation to another. I don't think the angry British men care about dating shows, so their chat might actually be the preferable one right now. 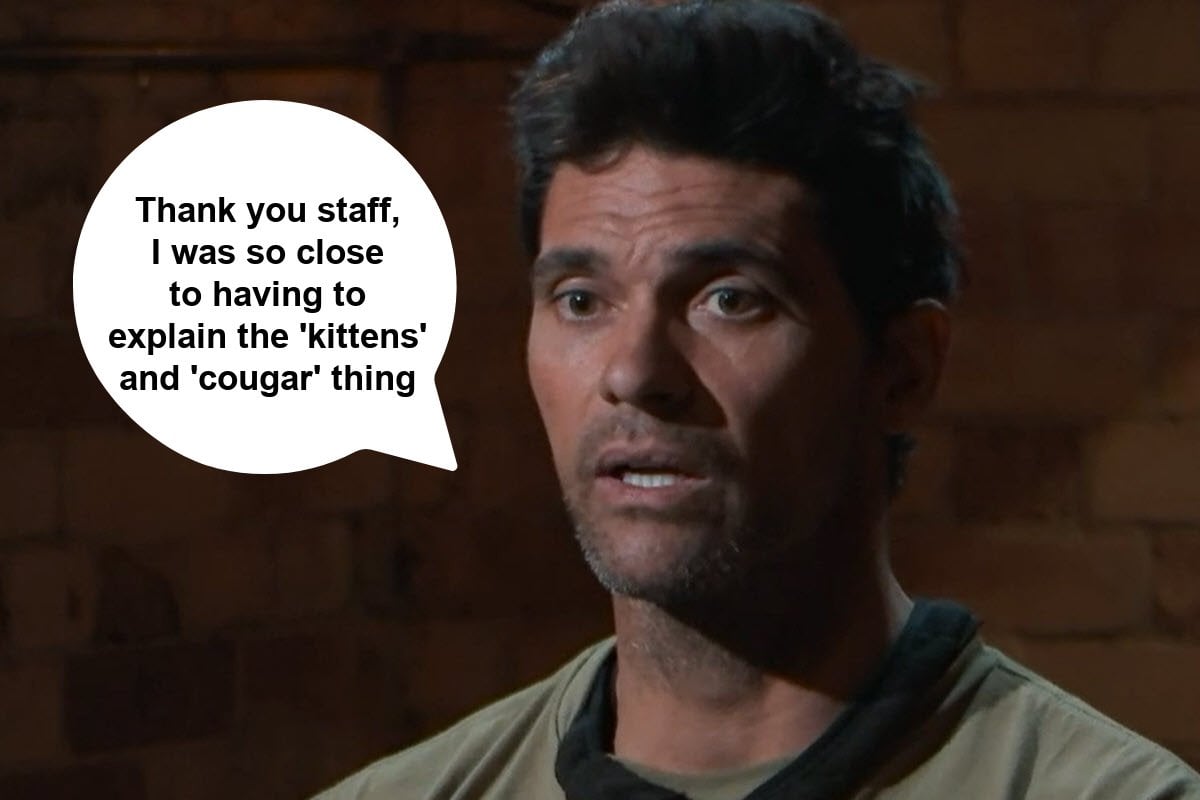 The DS can see he's been overthinking things and encourage him to go back to his 'youthful' tennis mindset of pushing himself to the limits and believing in his abilities.

By the time he gets back to camp, it's bedtime, which means no one can ask him anymore questions about that weird dating show thing.

It's a shame for me personally, but as the angry British men have taught us; when we're knocked down, we have to keep getting back up.