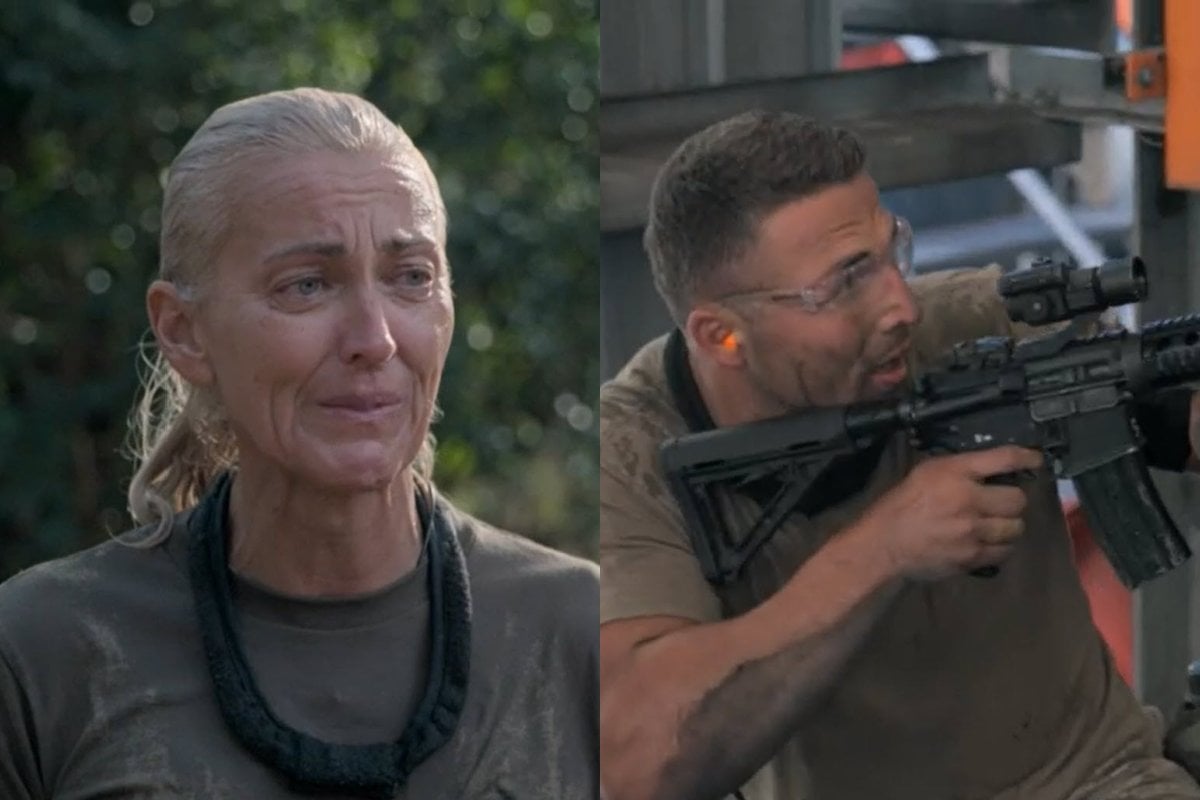 It's day seven of the selection process and holy s**t, the celebs have only been at this for a WEEK.

At breakfast, Kerri has a little cry. Not sure if it's because of the stodgy porridge and one hard-boiled egg, the constant yelling by angry British men or the physical and mental pain of this absolute mess of a show.

Perhaps a 'kill or be killed' scenario will perk her up?

The recruits have to save a hostage and avoid being shot by two 'hostiles', a.k.a a man in a balaclava and one of the angry British men. If they get shot, which I presume a lot of them will, they fake die and fail the task.

And do you know what could make this extremely fun task even better? Wearing hoods over your head, so you have no sound or sight until the moment you have to enter a building to be fake shot, and then being surprise attacked by water to the face.

Dan Ewing is first up and he makes it to the hostage before being shot by the angry British man named... Foxy.

Kerri is also shot by ol' mate, but Jana Pittman takes Foxy out.

The other angry British man says "that was f**king impressive, if I'm honest" and it's such high praise presented in such an angry way.

Heath Shaw is next and first he explains how his ADD makes focus and following instruction harder, which feels like... foreshadowing.

Yeah, so Heath gets tunnel vision and walks straight past the first hostile shooter. An angry British man yells at him a lot, but they continue on the mission... only to be shot a second time by Foxy.

OH NO, HEATH YOU DIED TWICE AND THIS BRITISH MAN IS NOW GRABBING AT YOUR COLLAR AND SCREAMING. 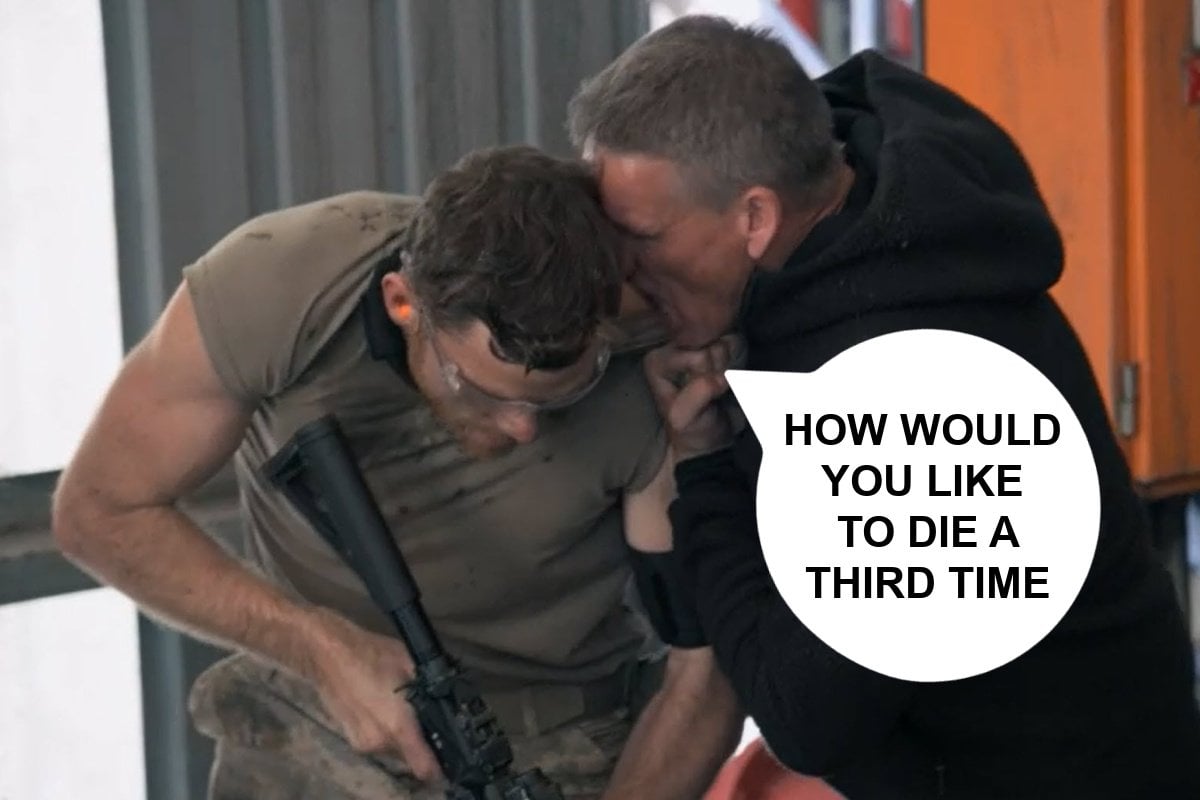 Most of the others fail and that particularly angry British man yells SO MUCH it's truly quite impressive.

I like to imagine him sitting down with a lemon, honey and ginger at the end of the day to sooth his extremely tired throat.

Isabelle Cornish and Jessica Peris are the only others to pass.

Bonnie Anderson is last, and she notices Foxy but is like a snail with a gun. It's too late. She and the particularly angry British man are fake dead.

Back at camp, the team have been resurrected, and Bonnie is considering quitting for the third time.

Nearby, Koby asks Dan to help him stretch, and it looks a little like Heath Braxton just gave birth to a giant pretzel. 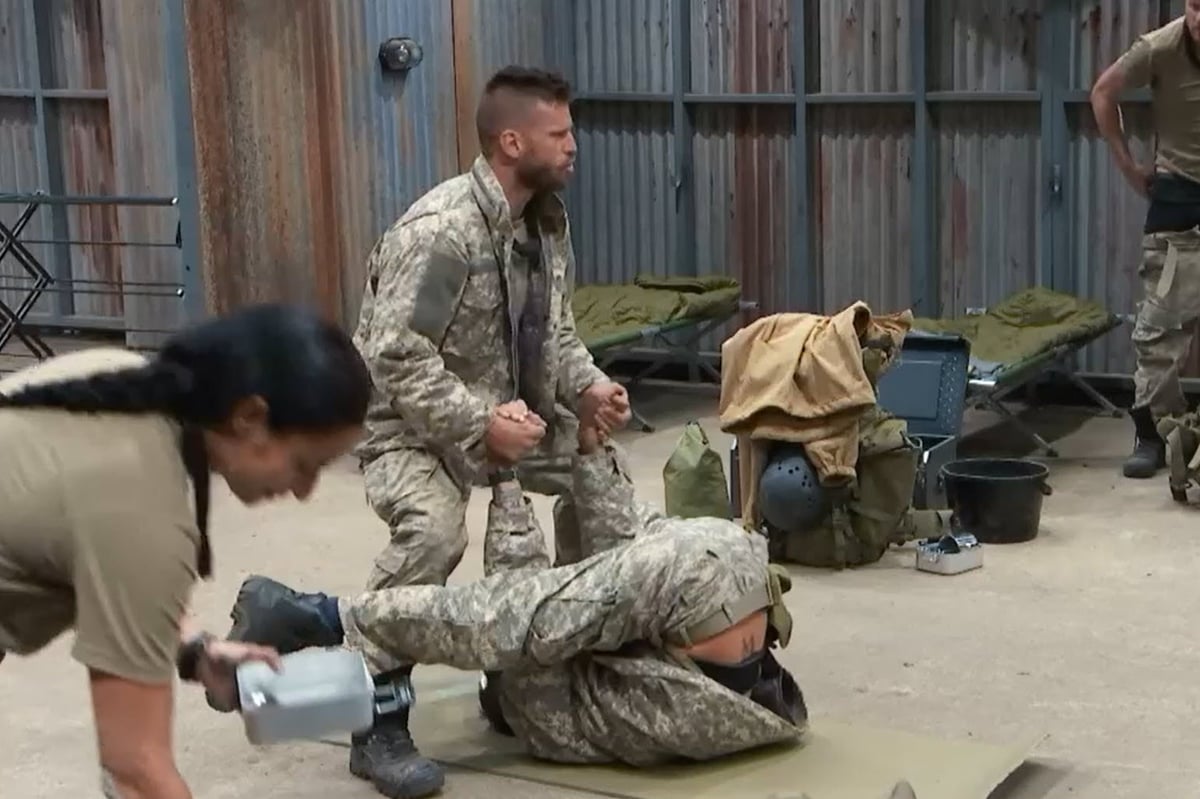 As the only person to die multiple times that day, it's Heath's turn for interrogation.

He tells the DS about his footballing family and career, and explains how he was diagnosed with ADD in year eight.

When asked, he places himself below the middle of the pack and begins to cry due to the frustration. 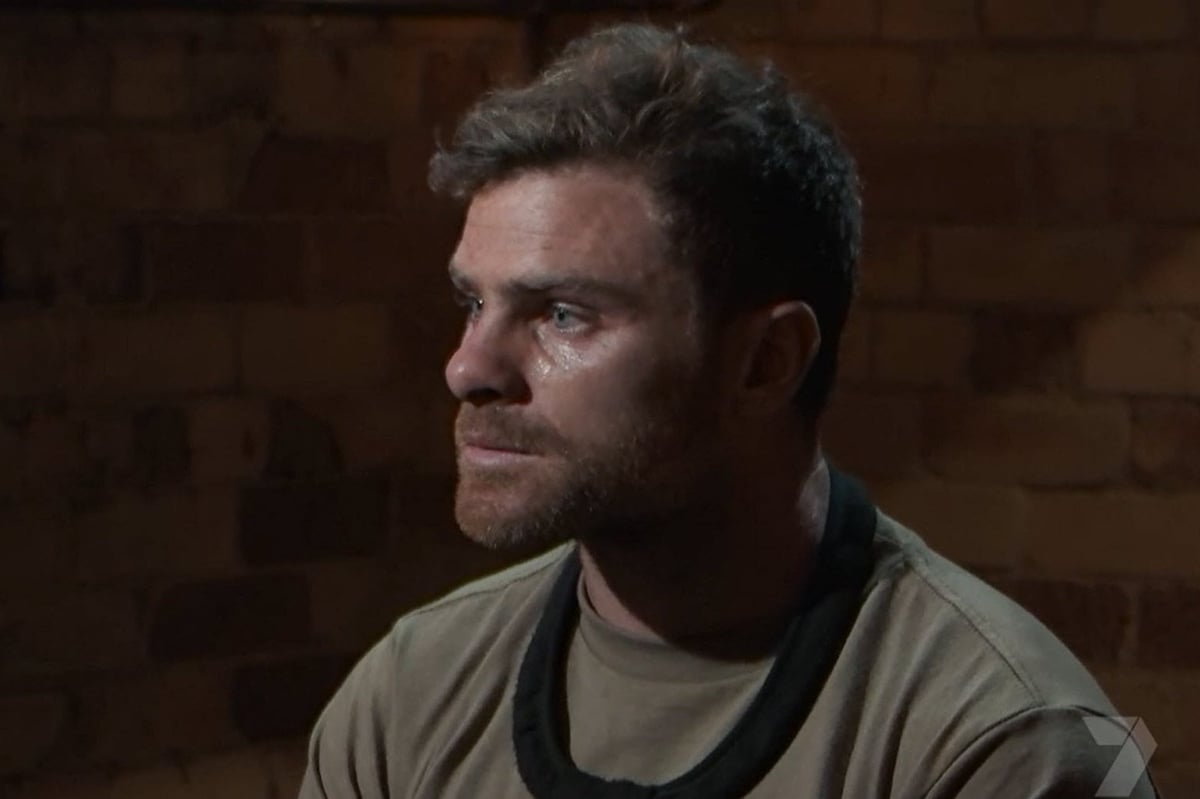 The angry British men give him a non-angry pep talk and say it's how you respond to failure that is the most important. That's easy to say when you haven't been fake shot twice in one day, but sure.

Koby is given the role of duty recruit, meaning he has the important task of nominating two people to clean the floors of their camp with buckets. And is also the main communicator between the celebs and the angry British men.

This goes... fine. The power and responsibility absolutely does not go to Koby's head at all.

Somehow, he organises the entire group to sweep the floor before actually telling them they were told to water them down. Jana is frustrated, and then everyone is frustrated, and it's all just a gigantic mess. Like their floor still is.

Kerri goes to see the medic because she's worried about her knee and holy crap, this doctor is a bloody legend.

He tells Kerri she doesn't need to try to keep up with the recruits half her age, and that it's only her ego that makes her think she does. And also, why is she trying to impress others when she's there to prove things to herself? 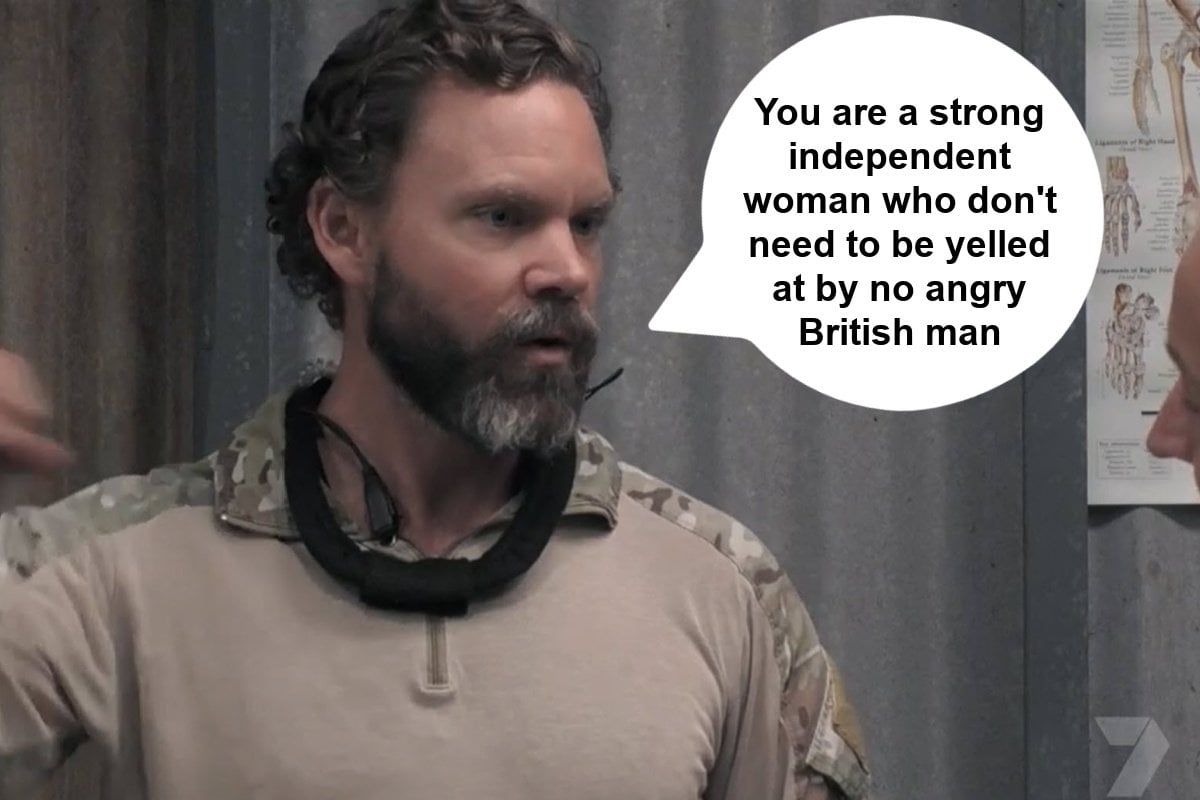 IT'S SUCH GOOD ADVICE AND HE DIDN'T EVEN YELL ONCE.

The day's second task is a pop quiz and an ice bath.

First in is Mark, and he is terrible. The shock of the ice is so bad he cannot answer anything correctly, meaning he remains in the water for around five minutes and needs to go for a run to avoid hypothermia.

John fails, and then Heath comes in and makes it look easy.

Jessica is next and she... appears frozen before she's even hit the water. Then once she's in, she is definitely frozen. She's basically a statue. 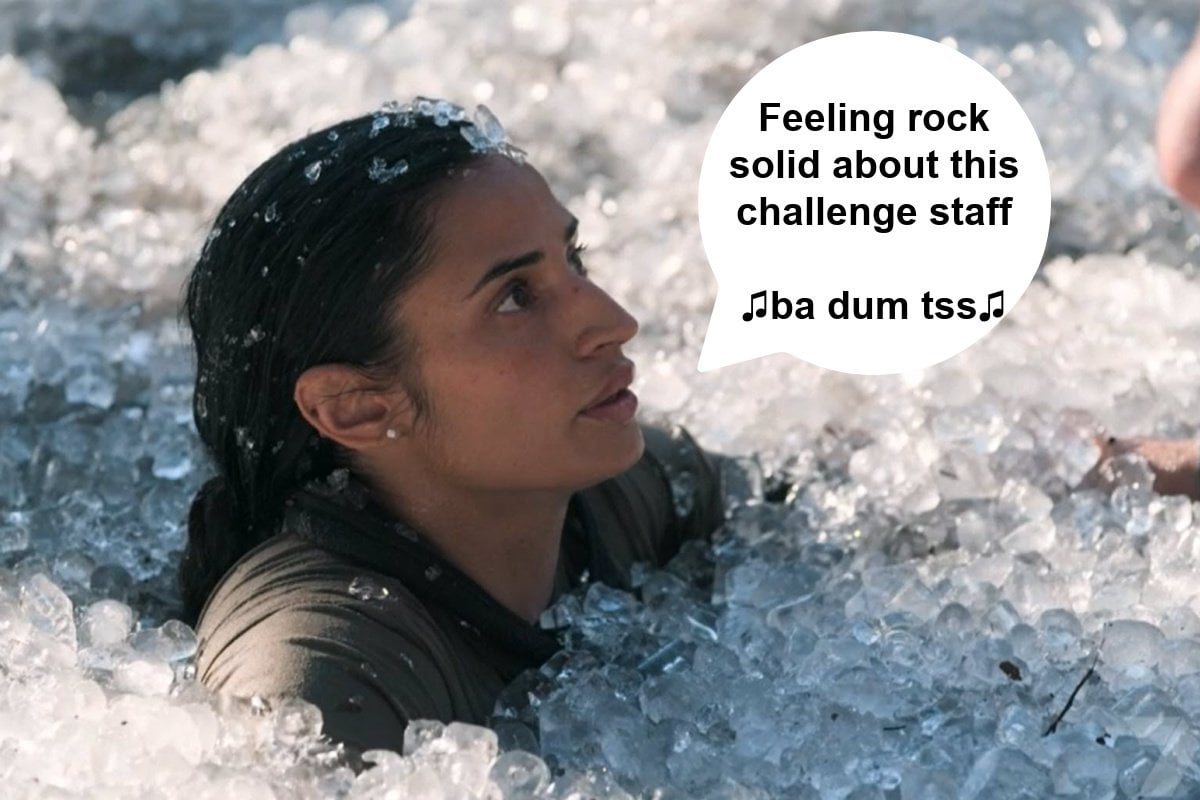 To be fair, one of the questions is who was the first to leave the show. We didn't even know who number three as at the time, so how are we meant to remember now?

Koby, Jana and Isabelle appear more successful, and then, finally, it's Kerri's turn.

She jumps straight in and answers both questions correctly.

But then it comes time to run and she simply can't. Her knee is buggered. She takes off her armband and regretfully voluntarily withdraws.

WHAT A BLOODY LEGEND.

Back at camp, Bonnie is thinking about maybe quitting FOR THE FOURTH TIME.

She's feeling the mental toll of the show and is constantly stressed and anxious.

Koby tells her straight up that if she wants to leave, she can just... leave.

She says she just feels like sh*t, to which Jana says... they all do. The group don't want her to go, but it's her decision and they'll support her either way.

So Bonnie yells out to the angry British men, and the sweet version of Angry James Bond appears.

I get whiplash whenever this man is kind and non-yelly.

He tells her he's proud of her and that she's done amazingly well and just like that, we're down to our final 10 celebs.