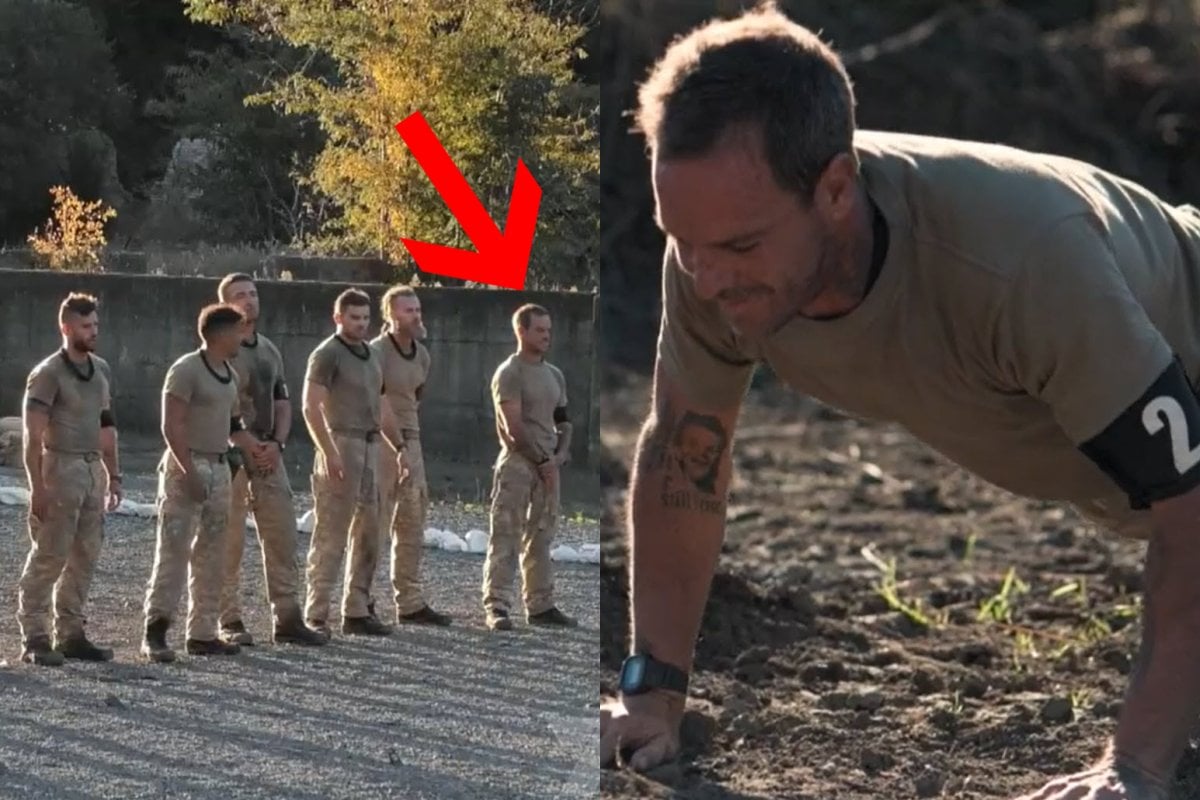 There's a mice infestation at camp and no one seems to care, because they are living under the threat of being tear gassed.

That truly is a harrowing sentence.

Politician Emma Husar is anxious about it, so she goes to ASK the STAFF if they're going to TEAR GAS HER.

I don't know anything about SAS training AND EVEN I KNOW THAT'S A BAD IDEA.

THESE BRITISH MEN LOVE TO BE ANGRY AND YOU'RE GOING TO GIVE THEM GREAT REASON. 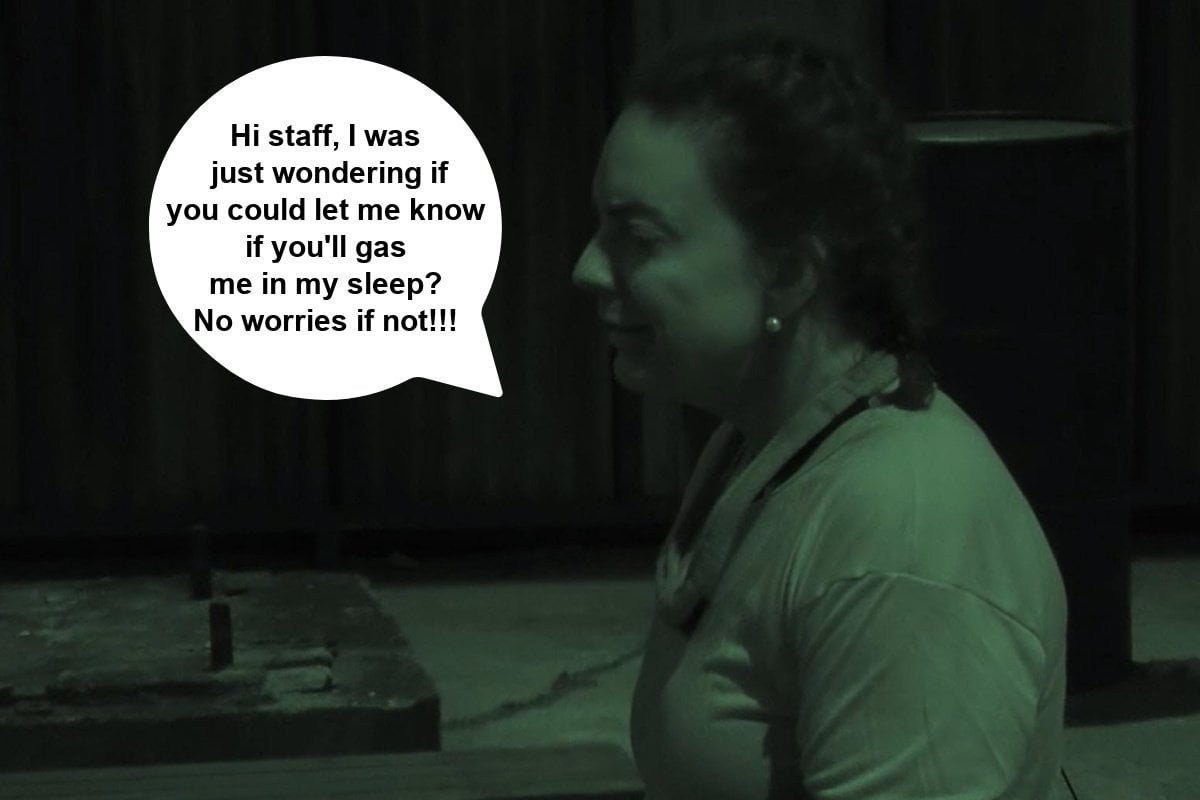 Thankfully, the angry British men also seem to sleep soundly, so they're not woken by her whining outside. Instead, a couple of the other recruits shepherd her back inside for a gas-free night's sleep.

The next morning, the recruits and the show's Range Rover sponsorship make their way to a lake where they will be submerged.

The challenge is literally called DEATH BY DROWNING. Sounds pleasant.

Angry James Bond explains how the celebs will be lowered into the water inside a vehicle, where they will need to remain strapped in until one of the other angry British men taps them on the shoulder as a signal that they can unclip their seatbelt and make their way out and back to the surface.

Apparently, the most important part is not to panic about the fact you're strapped into a fully submerged car because then you'll splutter, take in water and um... drown. Cool, cool, cool.

Angry James Bond says: "Let's put your life on the line" because yes, this is totally normal prime time television. 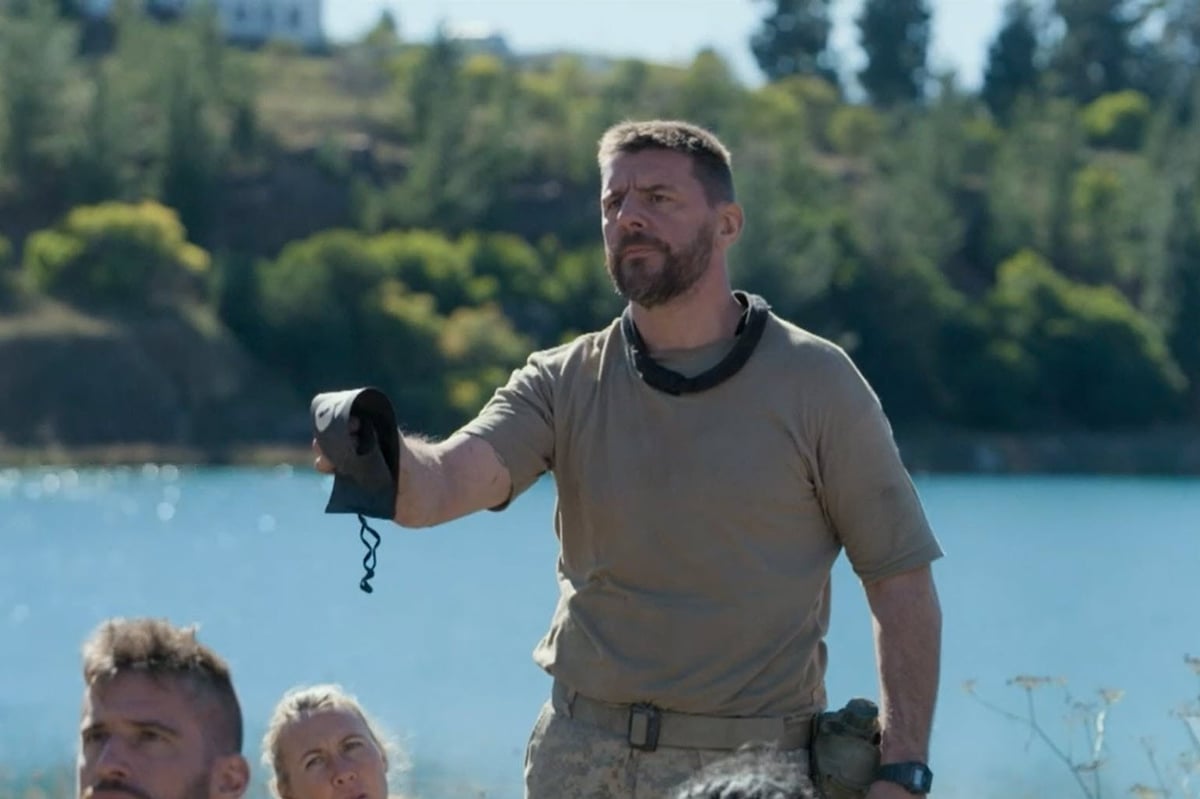 He hands over his number without even trying and withdraws from the show.

Ah well, at least he hasn't (for legal reasons, allegedly) established a compound of like-minded conspiracy theorists in northern NSW. Manu's legacy as the better MKR judge is safe, even if he doesn't want to maybe drown for our entertainment.

Bonnie Anderson tries to quit too, but Angry James Bond is like "so you can't hold your breath for 40 seconds?" AS IF IT REALLY IS THAT EASY.

Bra Boy Koby Abberton gives everyone a delightful pep talk about how it takes six minutes to die so even if they... pass out... underwater... they should be fine. 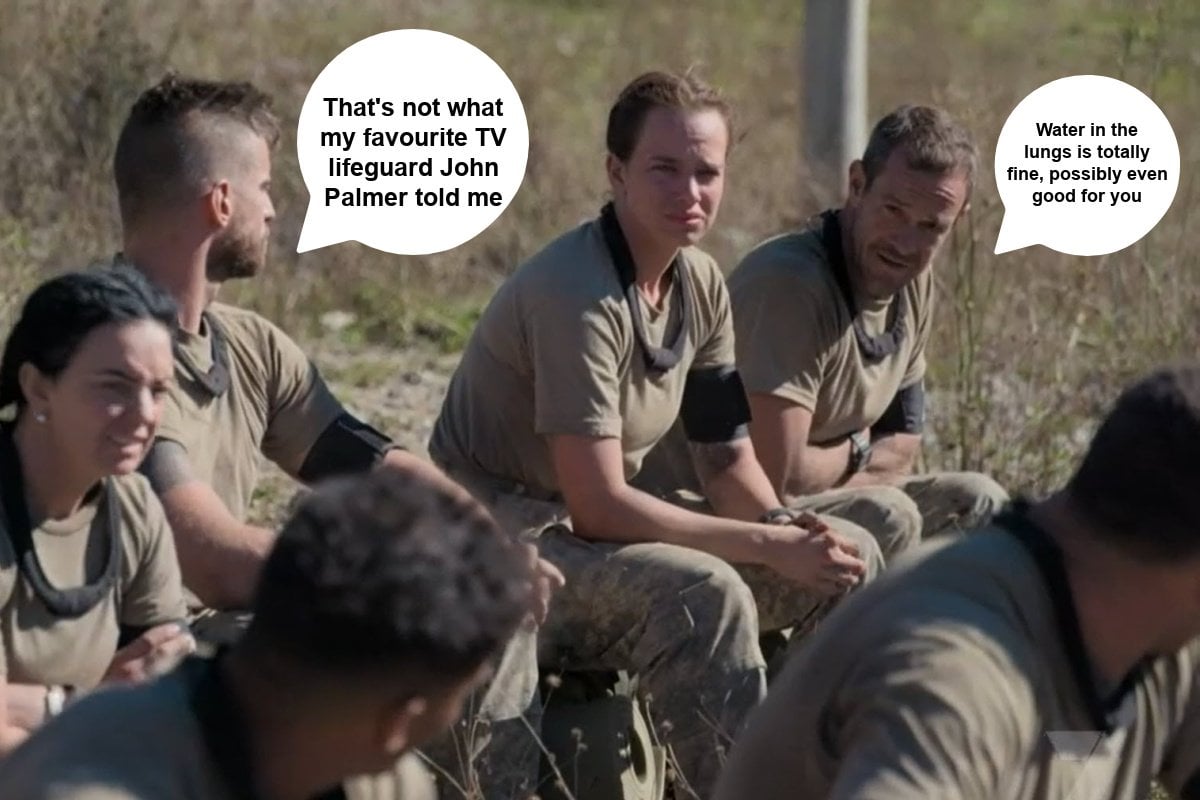 Emma Husar goes first and she straight up panics, escaping from the vehicle before she's given the all-clear and killing her metaphorical team. ¯\_(ツ)_/¯

Alicia Molik does slightly better, but still escapes before she's told to.

On land, track and field star John Steffensen is stressing because he's "not a massive fan of drowning" and dude, same.

Even though he's sh*t scared, he completes the task and I AM SO PROUD OF YOU ALLEGED CELEBRITY, WELL DONE.

Bonnie is also still sh*tting herself and on the verge of quitting, but she too pushes through the fear and nails. 👏 it. 👏 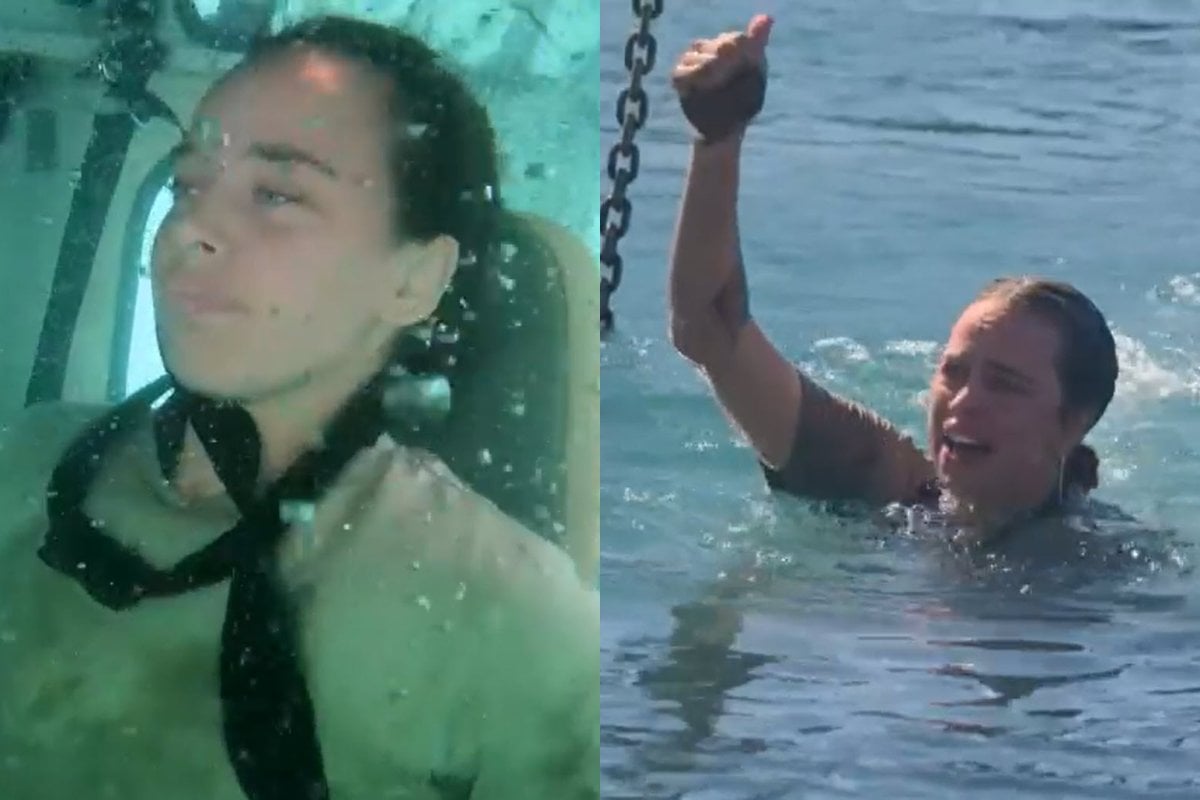 Koby is very confident on account of being a surfer and also nearly drowning before in a scarier, uncontrolled environment. He does it easily, but forgets to signal to Angry James Bond that he's okay even though he very clearly... is.

Everyone else also succeeds, until it's track athlete Jessica Peris' turn. She says her stepfather died in a car accident in 2012 and it's had a major emotional impact on her and her family, as it bloody well would.

She panics as soon as the water hits her face and immediately escapes the vehicle, failing the task and earning her a spraying from a particularly angry Angry James Bond.

Obviously, it also means interrogation time but first... we have to watch Manu walk off into the sunset/Blue Mountains. 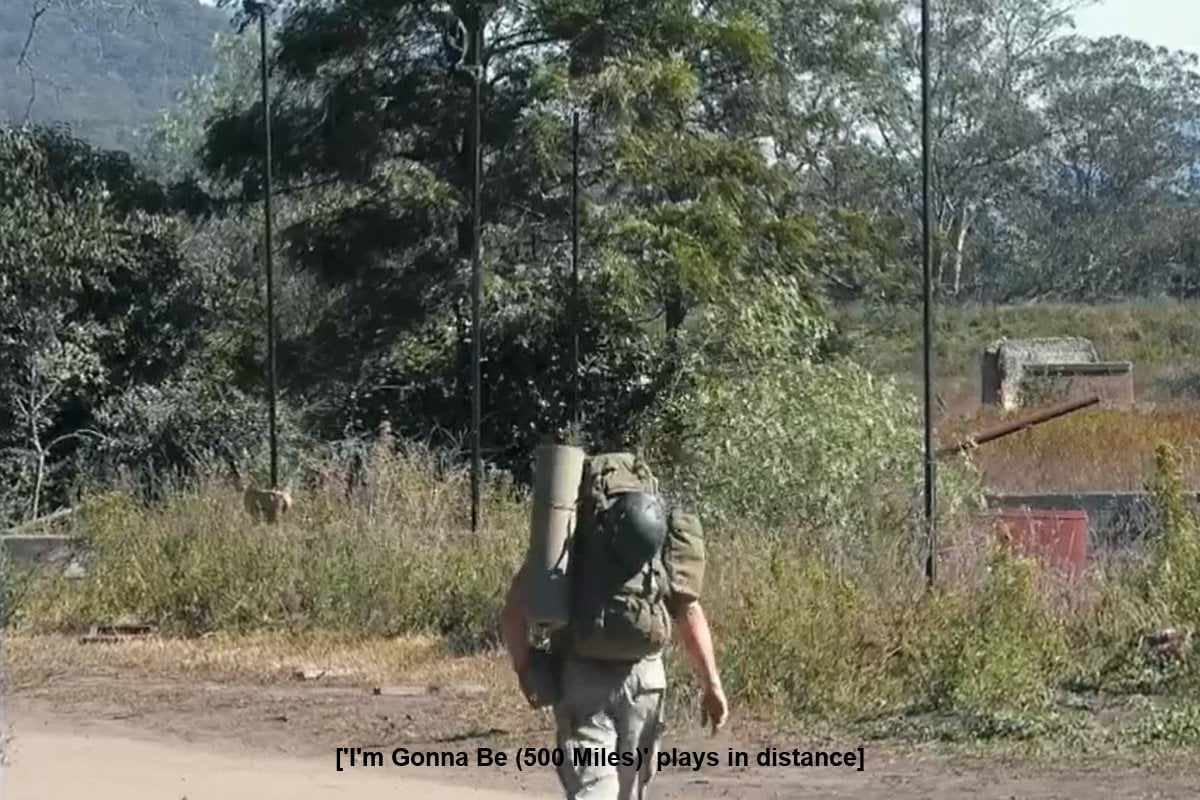 Jessica explains to the actually-quite-calm-right-now British men that she knew she could do the task, but she unravelled after a split second flashback to her stepfather.

She says she's overcome growing up in a violent household and living in the sporting shadow of her mother, Olympian and former Senator Nova Peris.

She then says her own sprinting career "crumbled" after a failed drug test and culminated in 2019, when she was rushed to hospital after taking too many sleeping pills.

One of the British men, who is not at all angry, says he too has contemplated suicide and is really, really kind and understanding in response.

Ok, I didn't expect SAS Australia to offer us... even a glimmer of wholesomeness, but that was... nice. 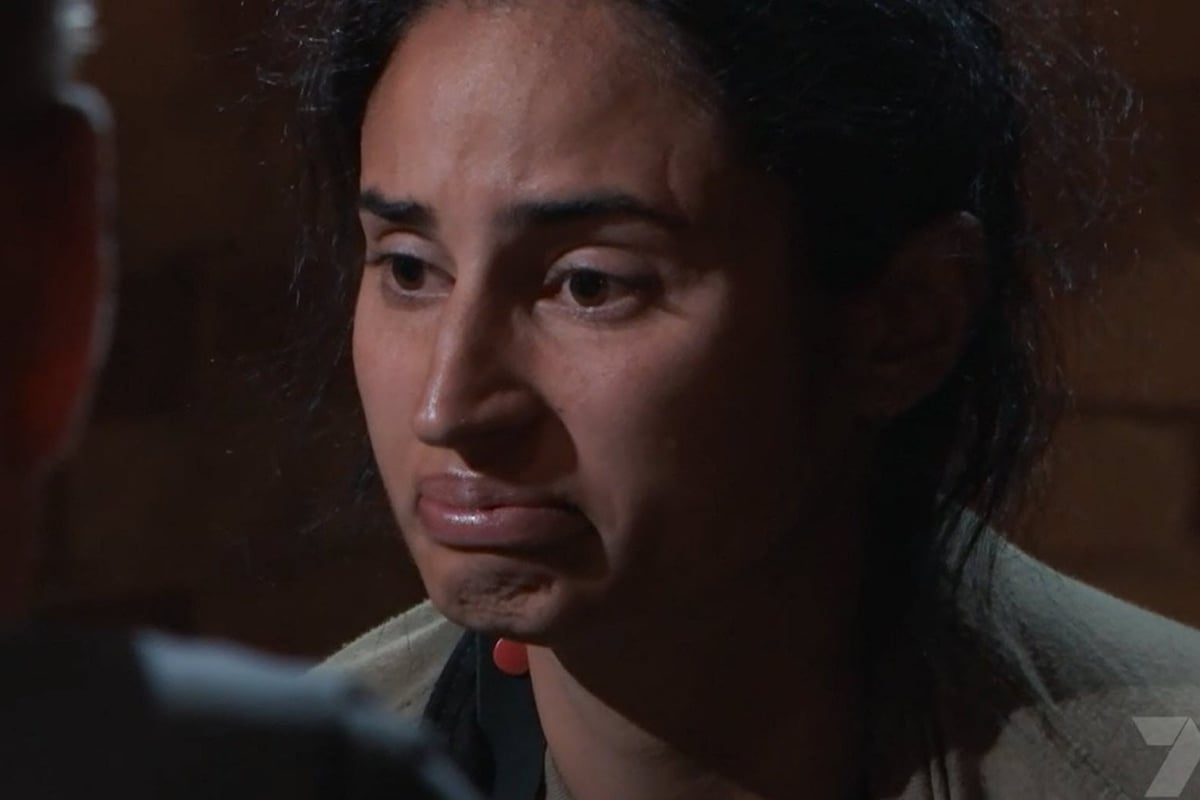 The niceties don't last long though because it's time for a fitness test involving lots of painful exercises including my arch nemesis, the burpee.

Before they begin, Emma hands over her armband to stop herself from looking like "a right tit" and also to... stop the rest of the recruits being punished.

It's noble, and Angry James Bond is actually NICE about it.

Maybe I misjudged these British men. 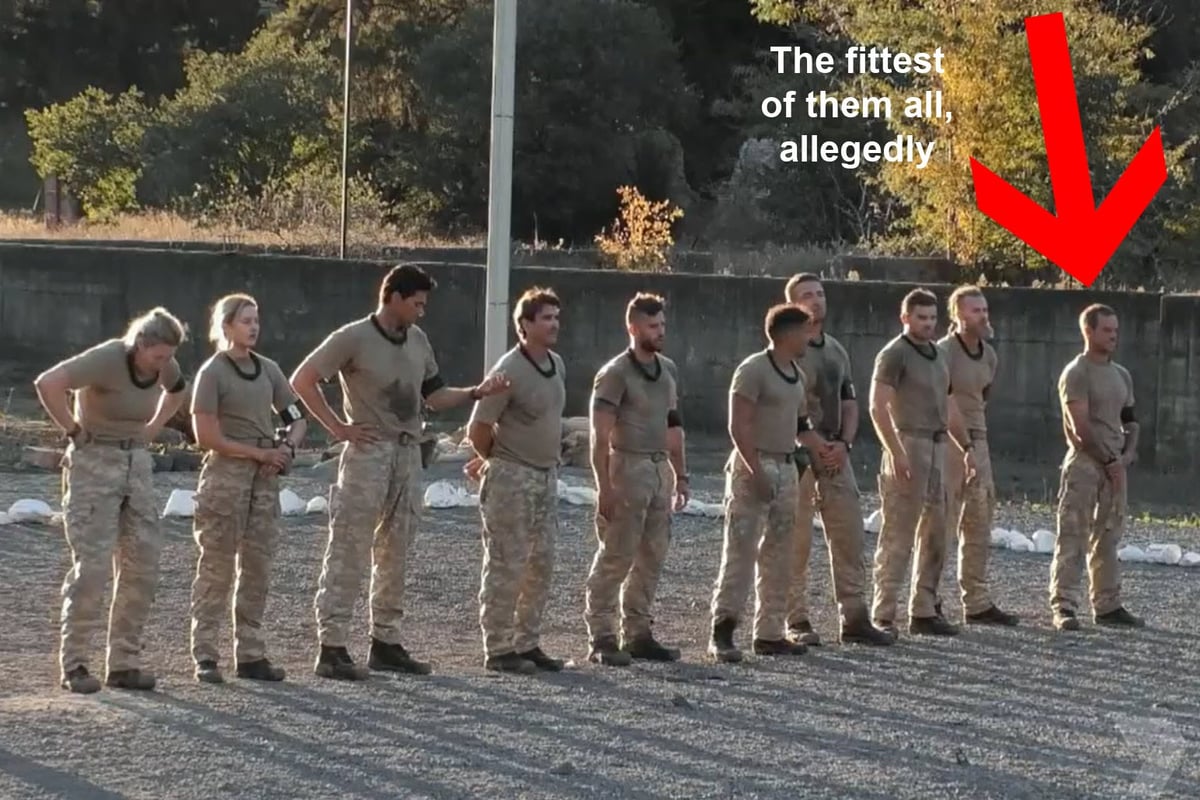 He takes to the course and... does really well.

Honestly, I didn't see that going his way.

Everyone else does it with various levels of grunting, and Jana Pittman - WHO HAD A BABY ONLY SIX MONTHS AGO - wees herself a little.

She tells everyone about the weakened pelvic floor muscles of a postpartum woman and I for one am very interested in exploring the not-often-discussed affects of childbirth on a woman's body on national TV, but Angry James Bond is like 'WOAH TMI LADY'.

As the woman tend to their woman problems, or something, we learn the true reason the recruits are being physical pummelled: it's a TEST to see who cheats when the angry British men are not around.

Those British men are sneaky as hell, and yes, they're back to being angry.

They review hidden camera footage and someone has done a big dirty cheat, only completing half the push-up reps they needed to.

IF IT ISN'T THE GROUP'S FITTEST MAN KOBY.

Turns out it's easy to stay ahead of the pack if you don't do all the exercises!! Life hack!!

The recruits have to once again line-up weakest to strongest, and Angry James Bond tells them to step forward if they didn't complete the correct number of reps.

Jessica, Bonnie, Mark, Pete and Sam step forward but are told to step back because no. They're not the cheater we're looking for here.

OH GOD YOU GUYS THIS IS GONNA BE GOOD.

Koby tells Angry James Bond he has nothing to own up to, in fact HE MIGHT HAVE DONE MORE REPS THAN HE NEEDED TO. 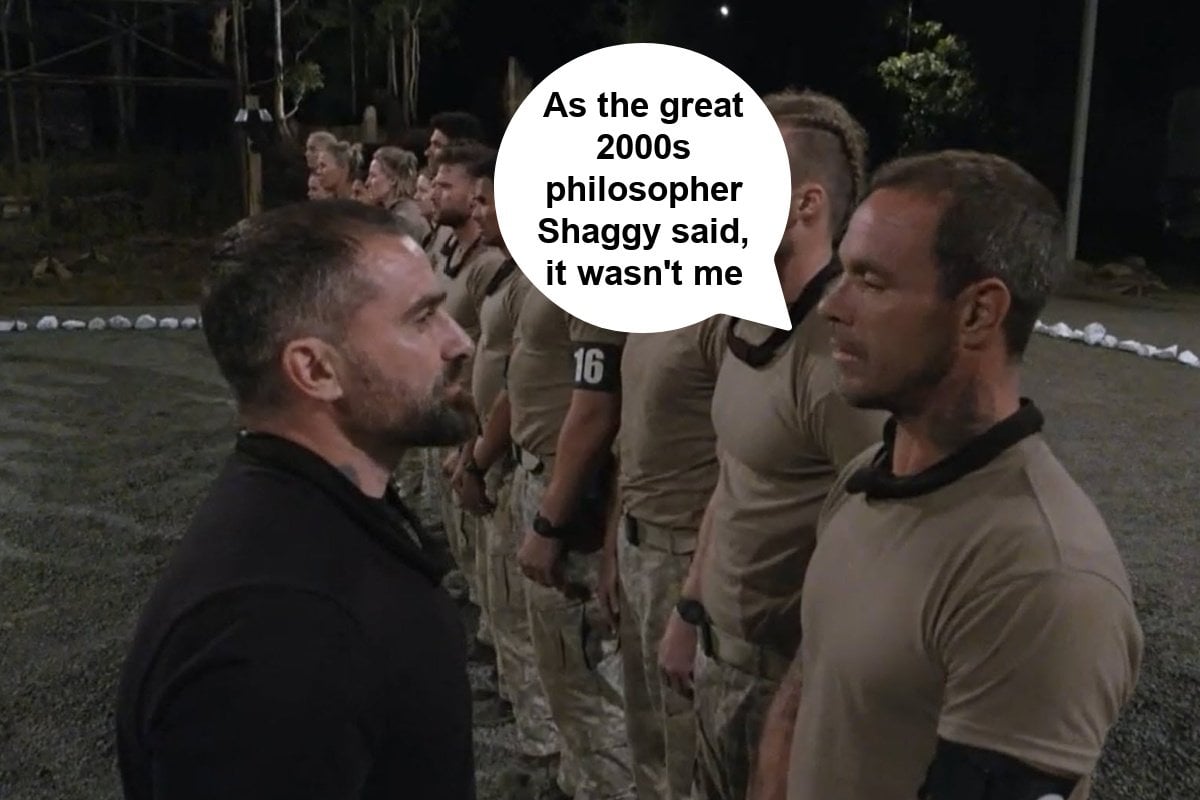 They're dismissed back to camp and everyone starts to second guess themselves. Koby says he really doesn't believe he missed any, and look: has anyone considered that he's just not great at... counting?

Uh ohhhh, it's time for him to be interrogated

Angry James Bond asks Koby if he thinks they are fair and honest, and this is the best trap-laying I've ever seen.

Koby says his integrity is questioned every day because of the environment he was raised in.

DAMN IT. I was too excited at the prospect of a show villain, and now I feel bad.

"I was raised in a harsh environment and sometimes I was a prick," he says. "But no, I don't deserve [that reputation]." 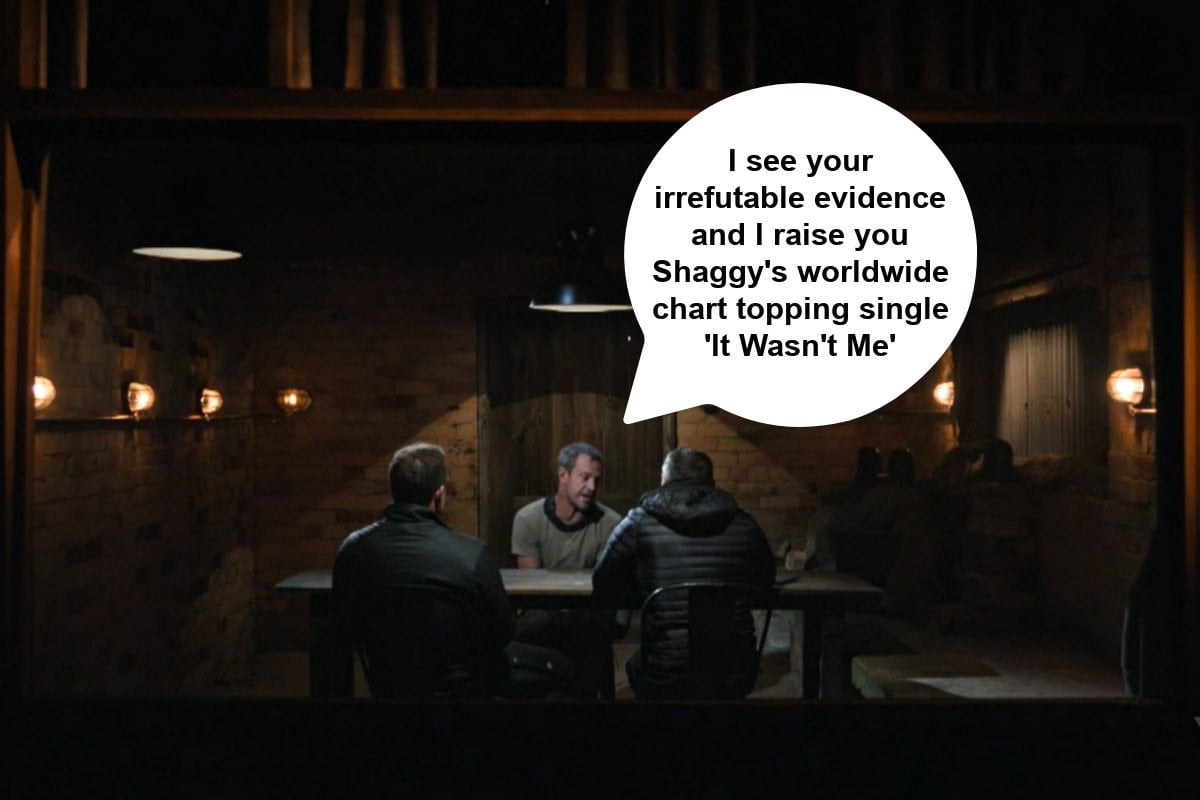 THIS IS THE SHAGGY DEFENCE IN ACTION, PEOPLE. Image: Channel 7.

Koby has to go back to camp and tell everyone they're about to be put through drills all night and it's all his fault.

That's when you see people start to... turn.

Koby doesn't accept fault and instead promises he can do more push-ups than everyone else in the room combined.

THAT'S THE WORST THING YOU COULD SAY.

The recruits toss and turn over the threat of a thrashing.

Angry James Bond looks gleeful as he explains to us that this is all a cruel, staff-sanctioned psychological game... and something tells me Koby is about to lose.