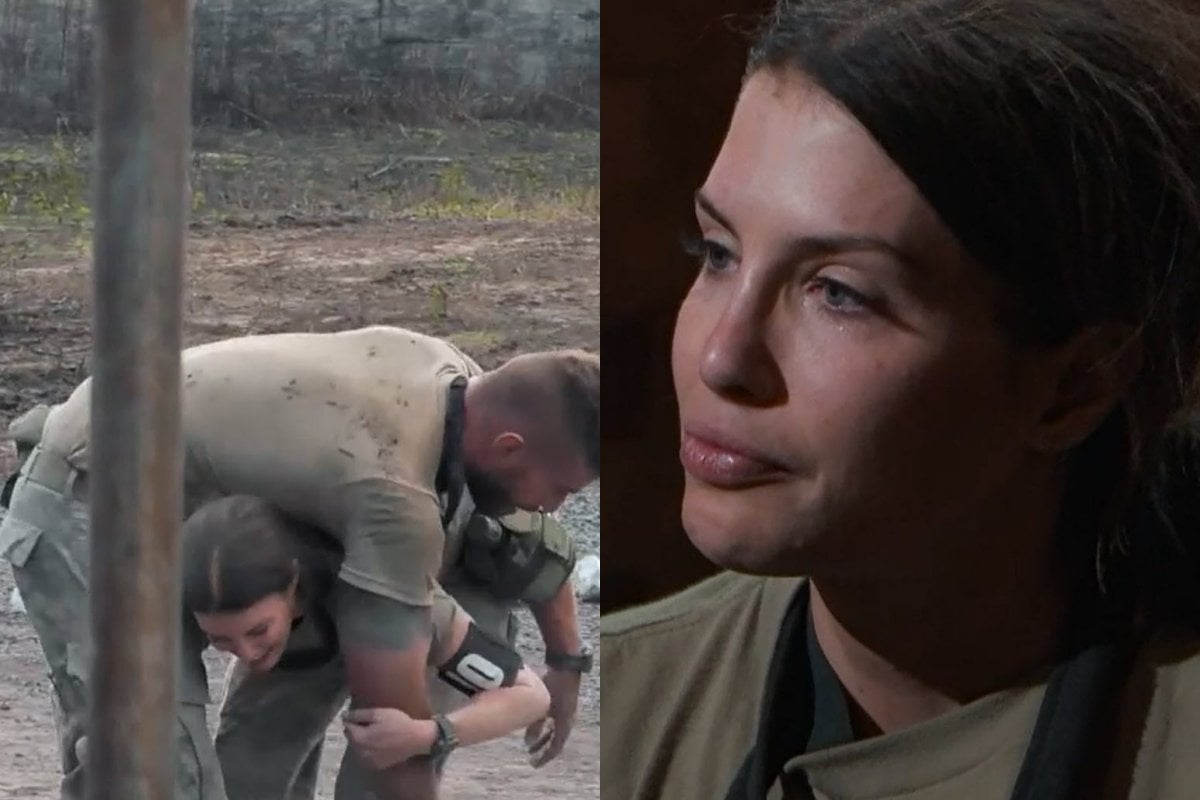 Manu is eating stodgy porridge, and he is not okay.

After giving half his meal to human vacuum Sam Burgess, the recruits are off on today's... adventure.

They have to pretend they're part of the world's most unhappy circus and tightrope across metal bars.

They're warned that if they fall, they need to just... go with it instead of trying to grab hold of something because they'll hurt themselves. That goes against human nature but OKAY FINE.

What happens next is a series of painful falls and angry British men yelling. Pretty standard for this show, tbh. 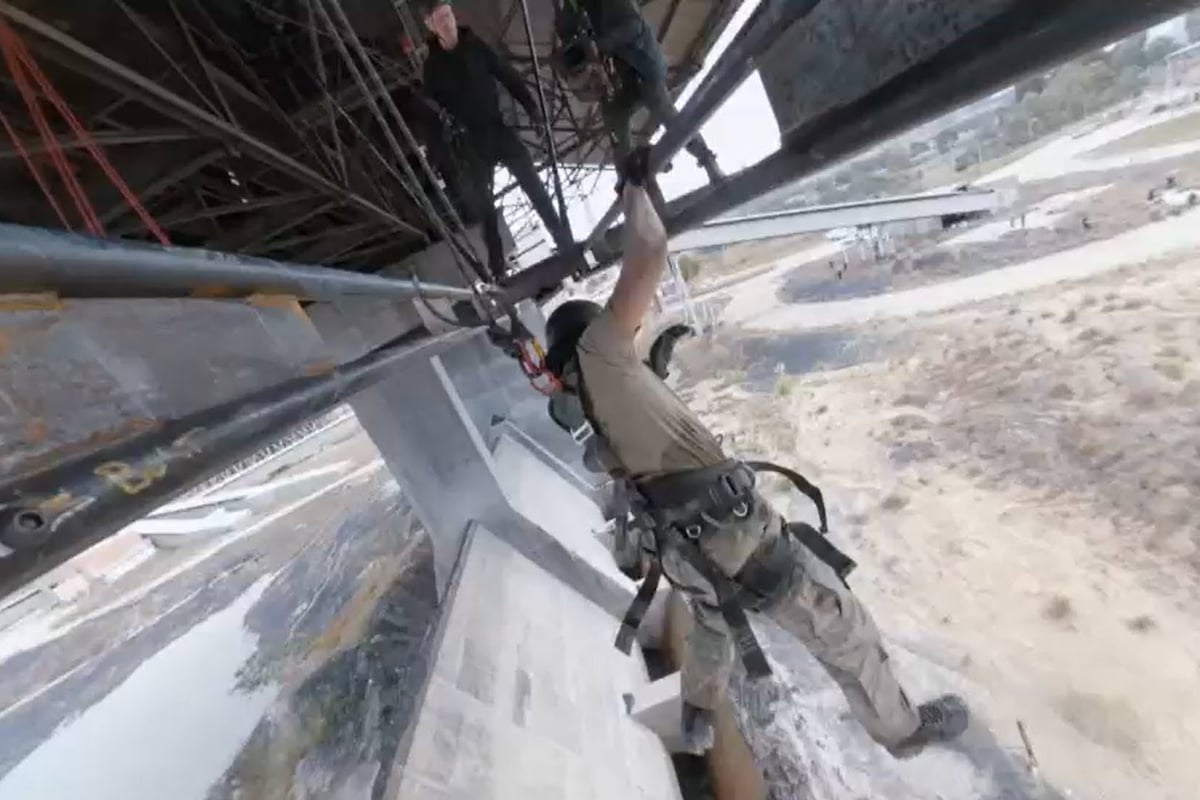 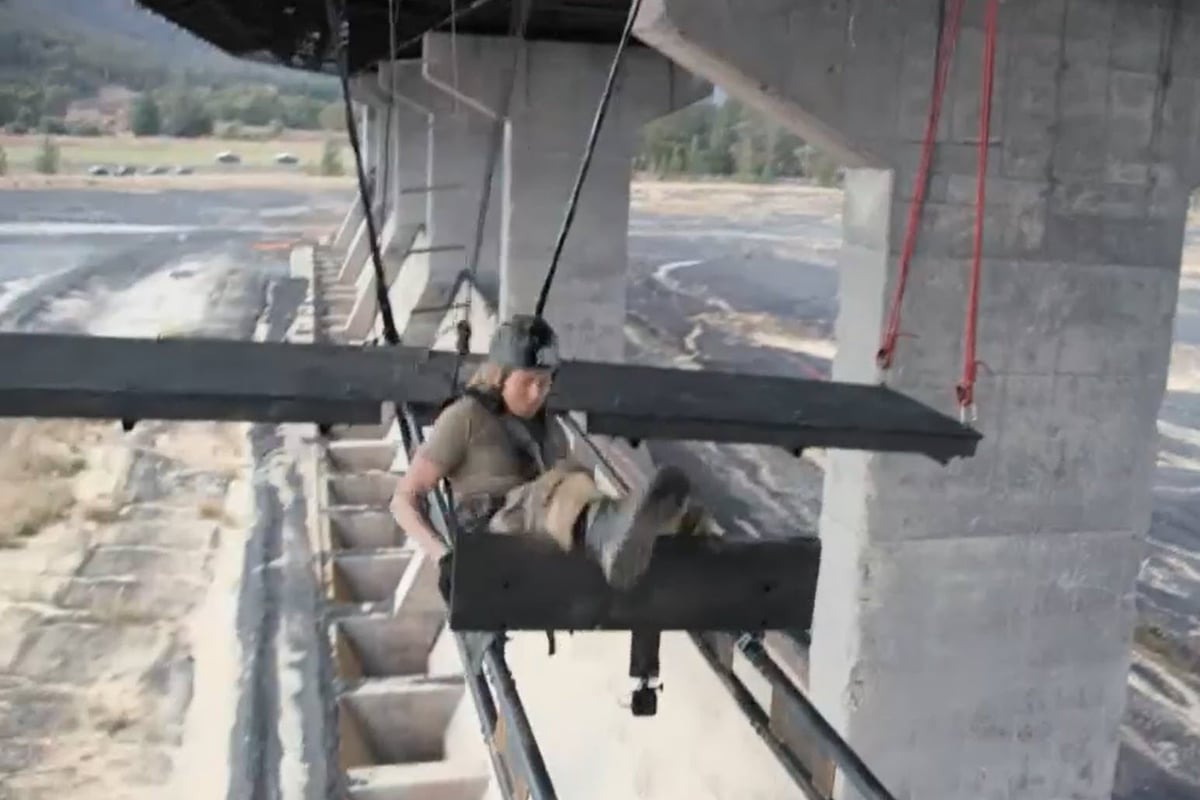 When it's Manu's time, he's clearly sh*tting himself about the height. He shuffles a little, then falls and retreats back to the starting block for another go.

We get to hear Manu say "f*** this sh*t" though so honestly I kind of enjoy it.

The first person to make it across successfully is actress Isabelle Cornish, and she's congratulated by the angry British men, who seem angry even when they're not.

Sam Burgess does it easy peasy. 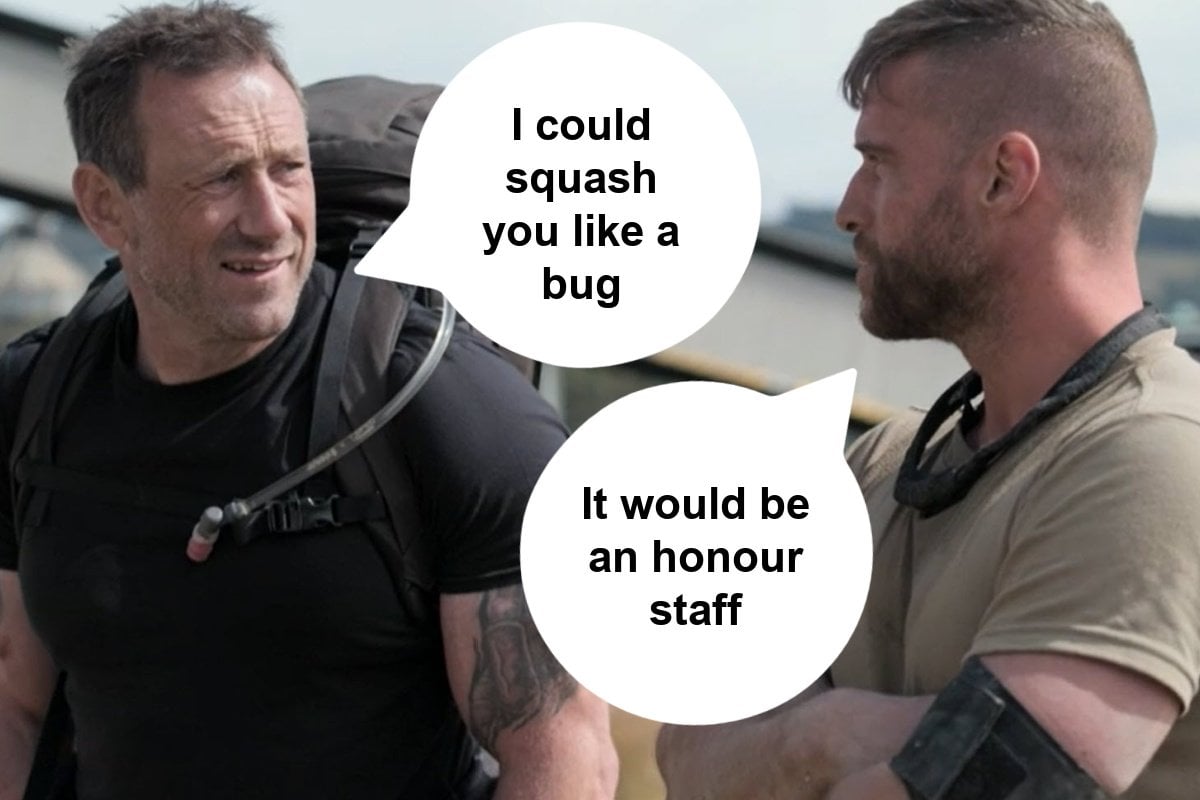 "Just do it," he says. Nike sponsorship incoming!

Finally, it's former politician Emma Husar's turn, and she's excited to have some agency back after stories from her ~political life~ ran away from her.

She's wobbly and her arms are flapping like she's trying to take off but she makes it to the end, right into the arms of a particularly angry British man.

The point of that exercise was courage, allegedly, but probably also to give some people gnarly bruises.

Back at camp, Jana - whose post-Olympic career is as a doctor - is tending to our broken recruits and honestly, it's very wholesome.

Meanwhile, the angry British men meet for a tea party and to b*tch about the celebs.

They think Isabelle was good, Manu was... not good and former Miss Universe Erin Holland was terrible.

You know what that means? INTERROGATION TIME.

Erin says she was spurred on to try the show after a sh*t 2020. She was separated from her fiance by border restrictions for six months, lost her aunty and was unable to attend the funeral. 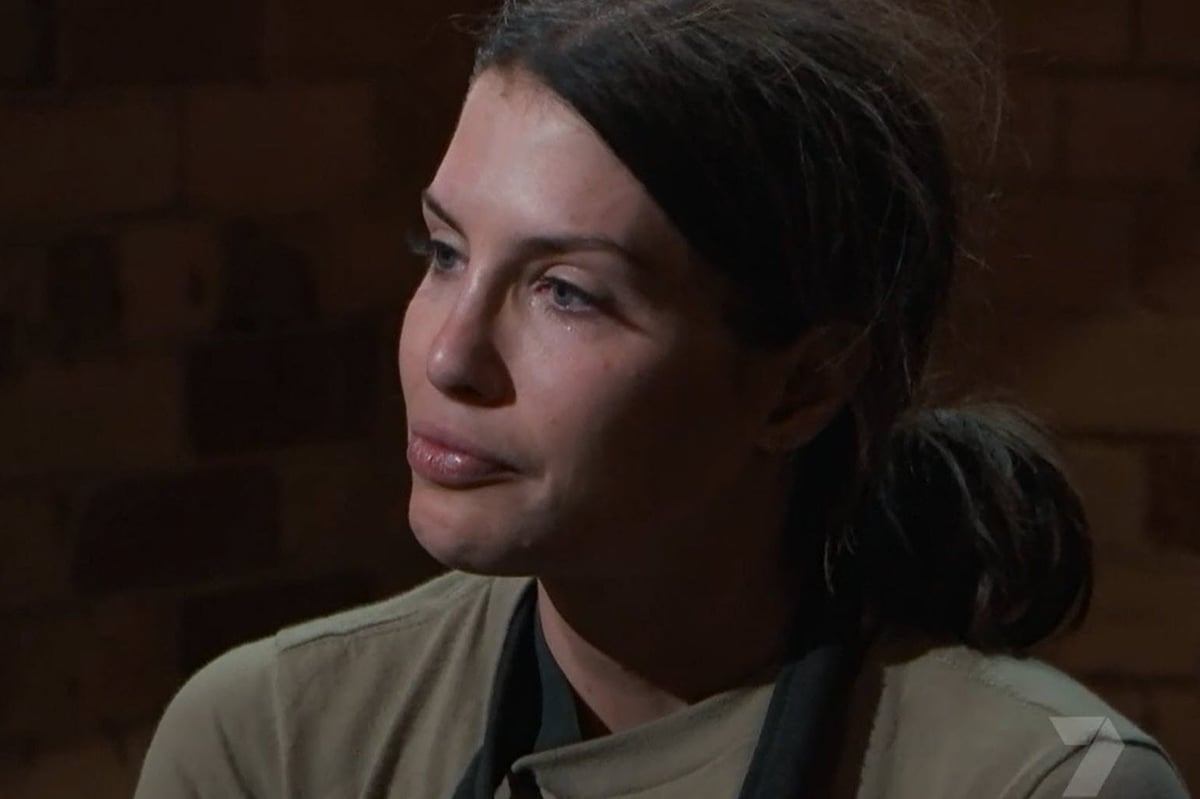 Then, one morning at 4am her house was broken into by three men when she was asleep (soundly, after taking anti-anxiety medication) and she didn't know until checking camera footage the next morning.

"I just felt so vulnerable... I already feel vulnerable sometimes because of my size and how I present myself but to know I made myself feel extra vulnerable by being knocked out upstairs," she said.

The angry British men, who are surprisingly non-angry in this moment, tell her she needs to let go of the guilt she's holding onto from this moment and believe in her abilities.

Afterwards, we learn a 'model secret' thanks to Sam Burgess pointing out how... Erin tucks her t-shirt into her undies. ¯\_(ツ)_/¯ 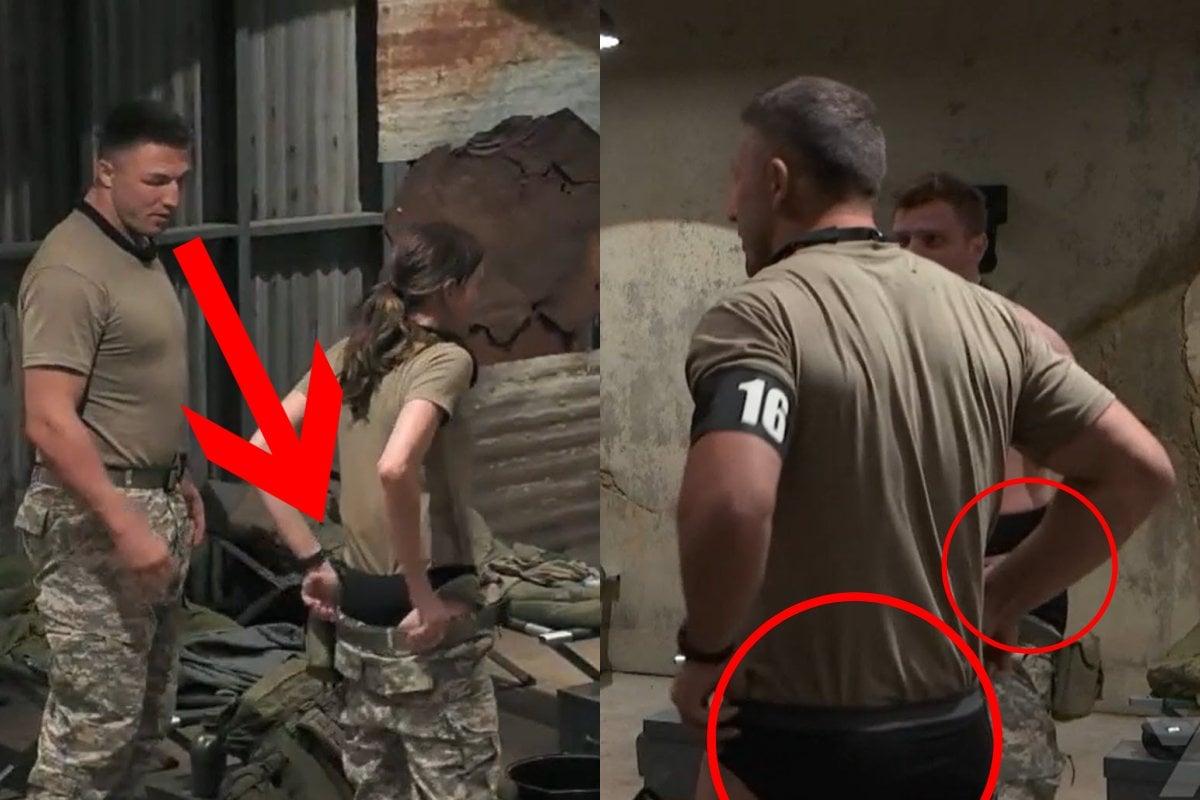 The others follow suit, and with their tops safety tucked into their underwear, they make their way out to the parade square to be yelled at and probably put through some form of physical torture.

Oh. I'm right, with a bit of psychological torture thrown in for good measure.

They're put through a bunch of very uncomfortable-looking drills, and Erin is not very... good. They punish her by making her carry Dan Ewing on her back.

(Is that really punishment? Debatable.)

Anyway, it doesn't go... great on account of their... size difference. 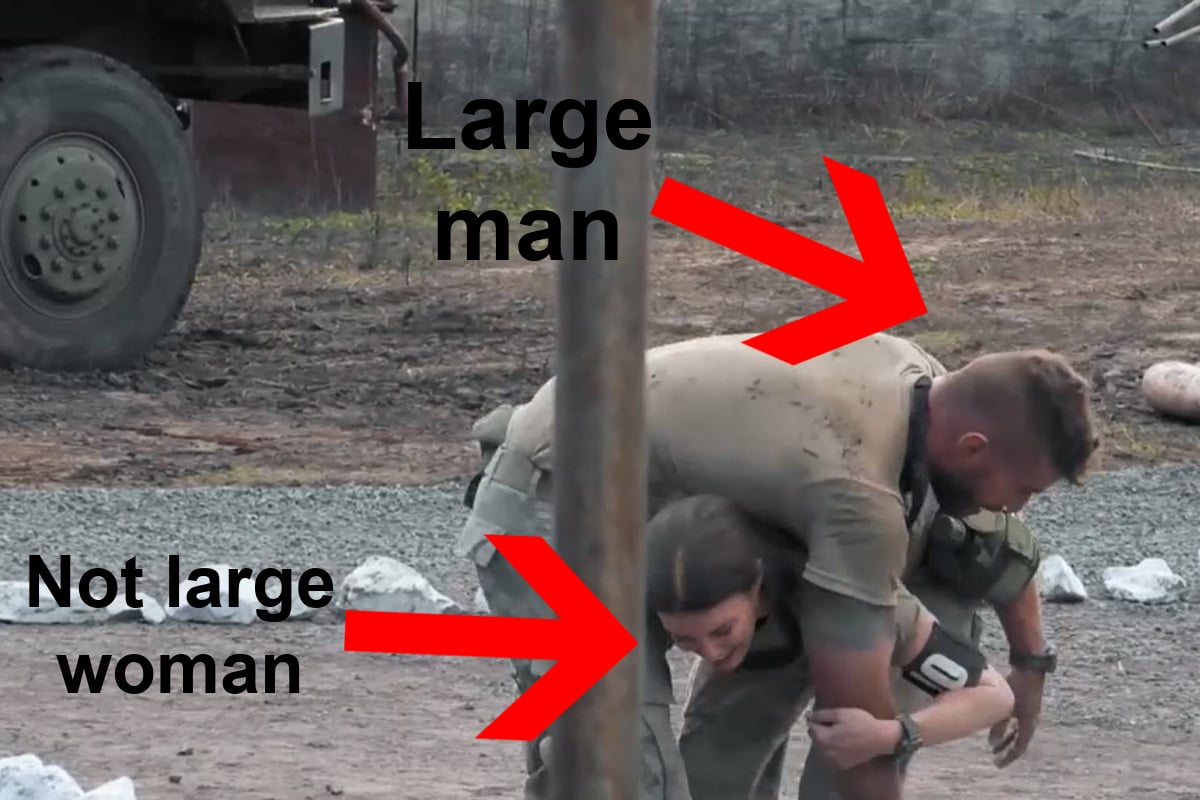 The other recruits are forced to hold their legs in the air and sandbags above their heads until Erin completes the task, which it's very clear she's just not physically capable of.

She finally hands over her number, withdrawing from the game and setting everyone... free from this one particular torture challenge.

Angry James Bond tells her it's the right decision, because everyone else was suffering because of her limitations, but yikes. Farewell Erin, we hardly knew thee.

For the rest of the celebs, it's time for the psychological part of the challenge: they must navigate a narrow underground tunnel.

IT'S A HUGE NOPE FROM ME.

Bonnie Anderson is first, and she is... claustrophobic. That's not ideal. 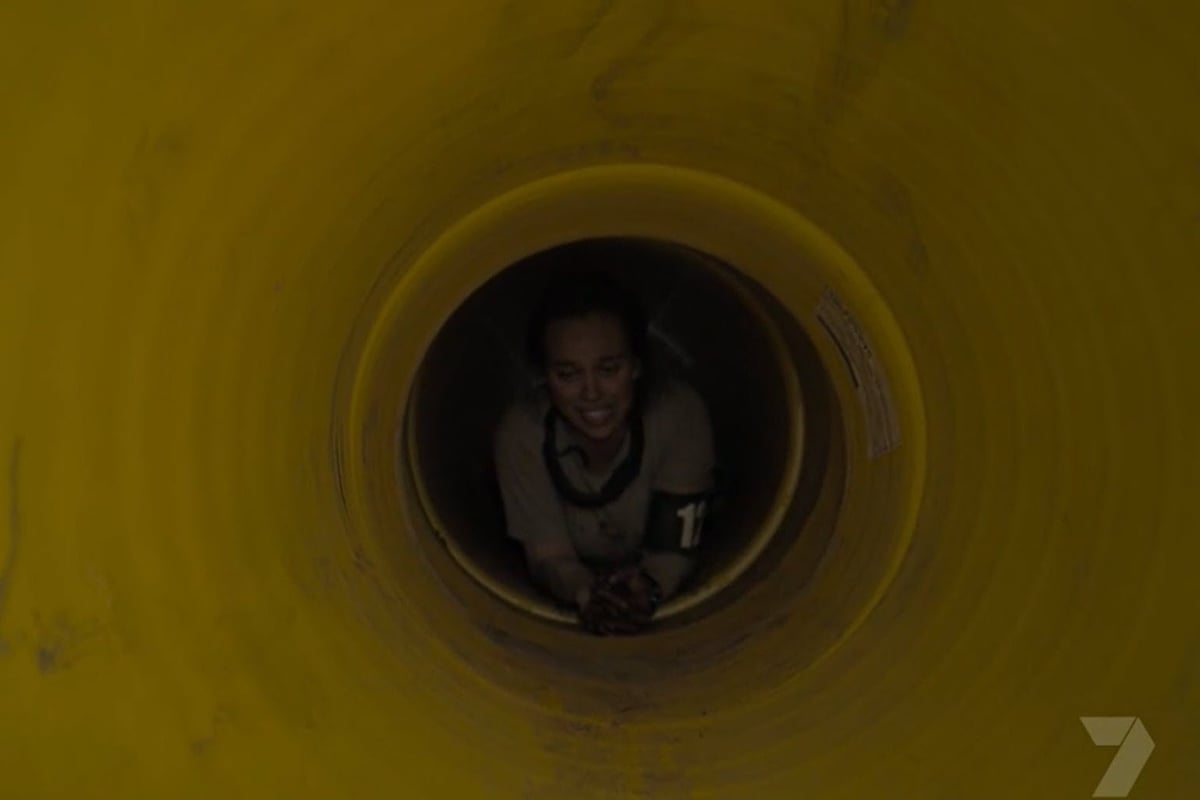 "This is way harder than when I spent weeks singing under a Bushranger mask on The Masked Singer." Image: Channel 7.

She does really well until the halfway mark, when she really starts to panic. With a bit of encouragement, from semi-angry British men, she makes it out the other end.

The others also make it through with various levels of... noise and complaint.

One of the angry British men explains it well when he says whether you have a panic attack or not, you still have to crawl out - so you may as well just not have the panic attack. Simple!

Sam Burgess is about twice the size of everyone else, so when it's his turn everyone is concerned he might get... stuck.

I mean. Even he's said he has a big head.

He's encouraged to make himself "long and lizardy" and goodness, that's a weird mental image. 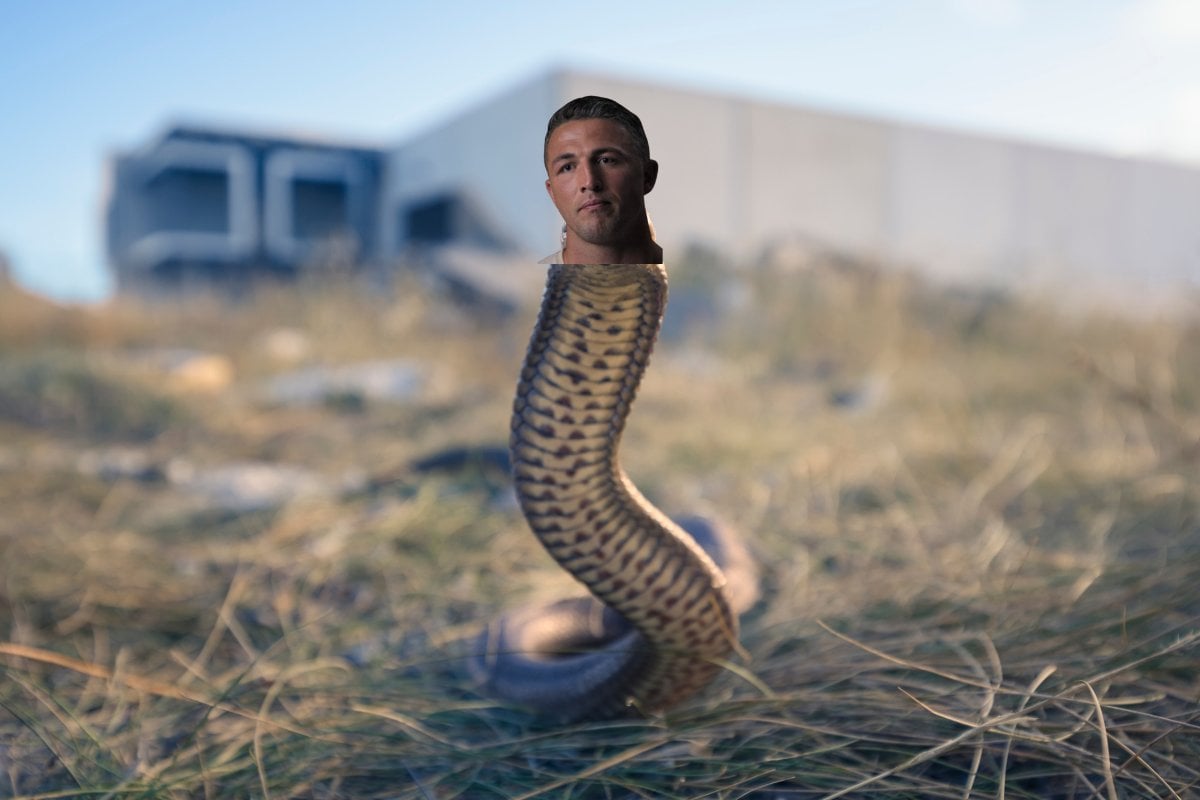 I KNOW, I realised snakes aren't lizards part way through this image but I HAD ALREADY COMMITTED. Image: Getty/Channel 7.

It gets to the point where his shoulder span is wider than the wormhole, and because of a shoulder injury that left him with limited mobility, he struggles to move past it.

Turns out he's been in there 40 MINUTES AND HE'S ONLY HALFWAY.

Nooooope. NOPE. Did I mention nope? 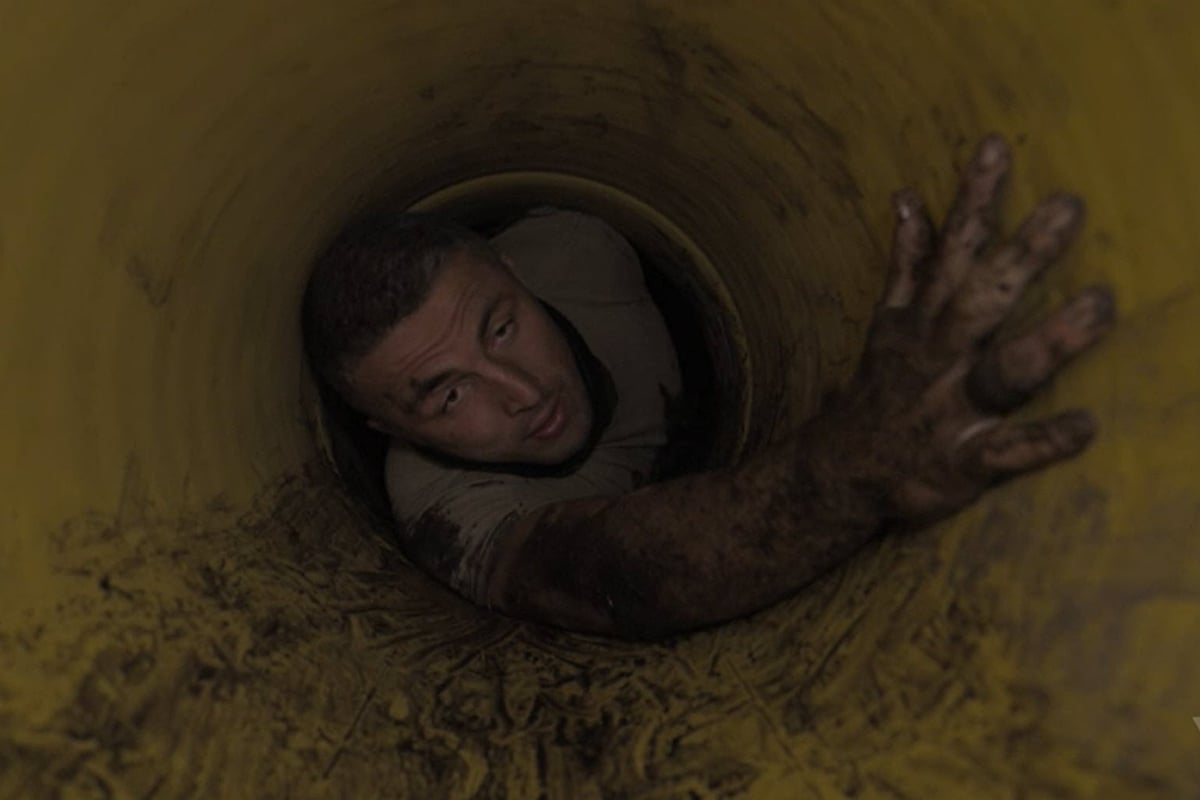 Finally, after lots of little... shuffles of his very large body, he makes it out.

Okay, how many more humans can we watch wriggle through a long tunnel before it gets boring? (The answer is... none.)

Dan Ewing says he thinks he can make it through because he can tell his fear it's served its purpose but... no thank you? I lost him somewhere along the way but it's a nice thought.

He says something about meditation and tbh, my favourite River Boy Heath Braxton would not be about that life.

Anyyyyway, everyone eventually makes it through and pls can we move on from the dirty hole!!!

Back at base, the staff call former politician Emma Husar in for questioning because she's... very quick in wormholes.

Husar, a former Labor MP, faced an independent investigation into complaints that staff in her office were subjected to bullying and harassment. These allegations were not supported by the findings, but Hasar was forced to quit her job after losing the Labor Party's endorsement for her seat.

"My kids were nine, 11 and 16 when their mother was being called a sl*t by the nation's media, on every front page across the country," she recalled.

"There was about 2500 articles that I had flashed myself in front of a colleague without wearing underpants, that I was sleeping with everybody in Canberra just about, had media camped outside the front door for weeks, [they] chased me across the front lawn asking me with a camera and a mic in my face 'are you a sl*t? Are you really Sharon Stone?'"

She said she felt thrown under the bus by her former party. 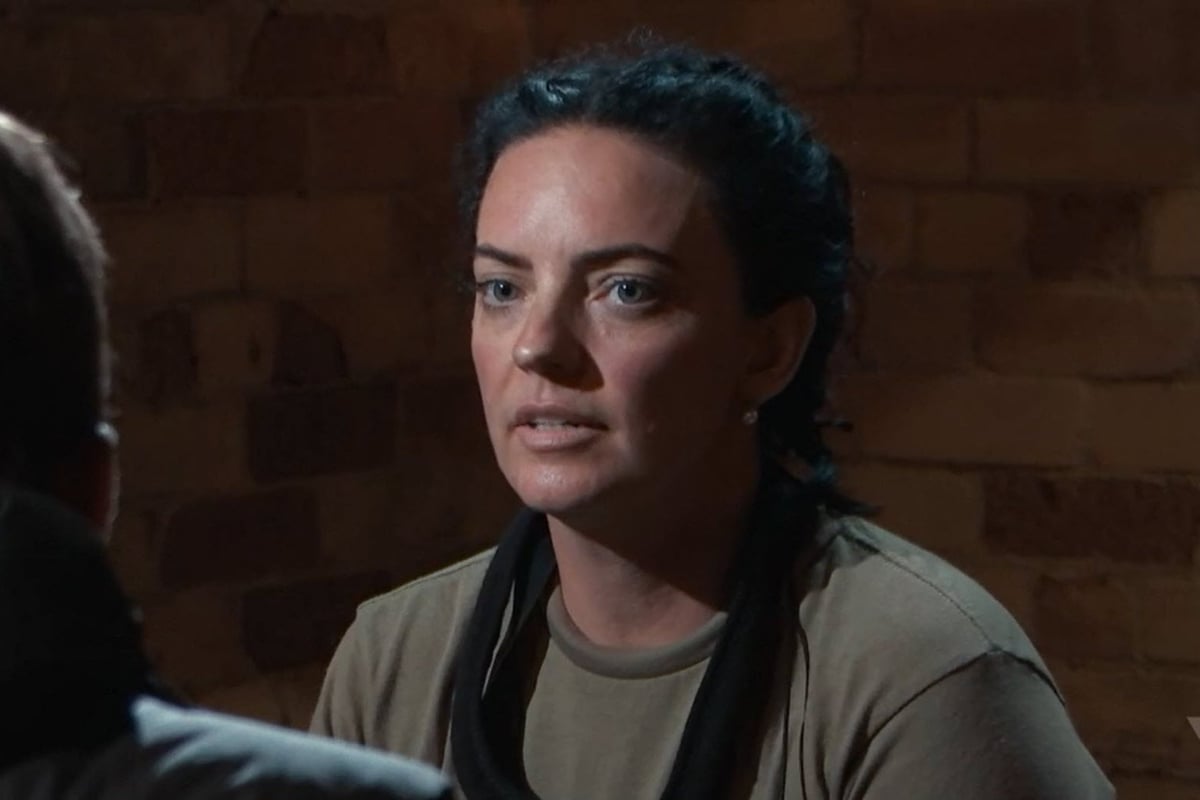 She has since been diagnosed with a severe depression and acute anxiety, that meant she often felt completely numb.

"It's a skill and a gift, and also a curse and a weakness," she said of being 'emotionally void'.

She says she does not believe in herself, and one of the angry British men says belief is one of the key characteristics needed to get through the course.

Oh, and also it's quite satisfying to prove your doubters wrong.

The episode ends with Husar talking about how much she hated being a woman in Canberra, and the string of news stories that have come out this year about men allegedly behaving inappropriately.

"For anybody who wants to say women's advancements are done and we've got everything we need, they're dead wrong," she says.

"I just wish I would've had more courage and I would've said 'enough is enough' way back then."