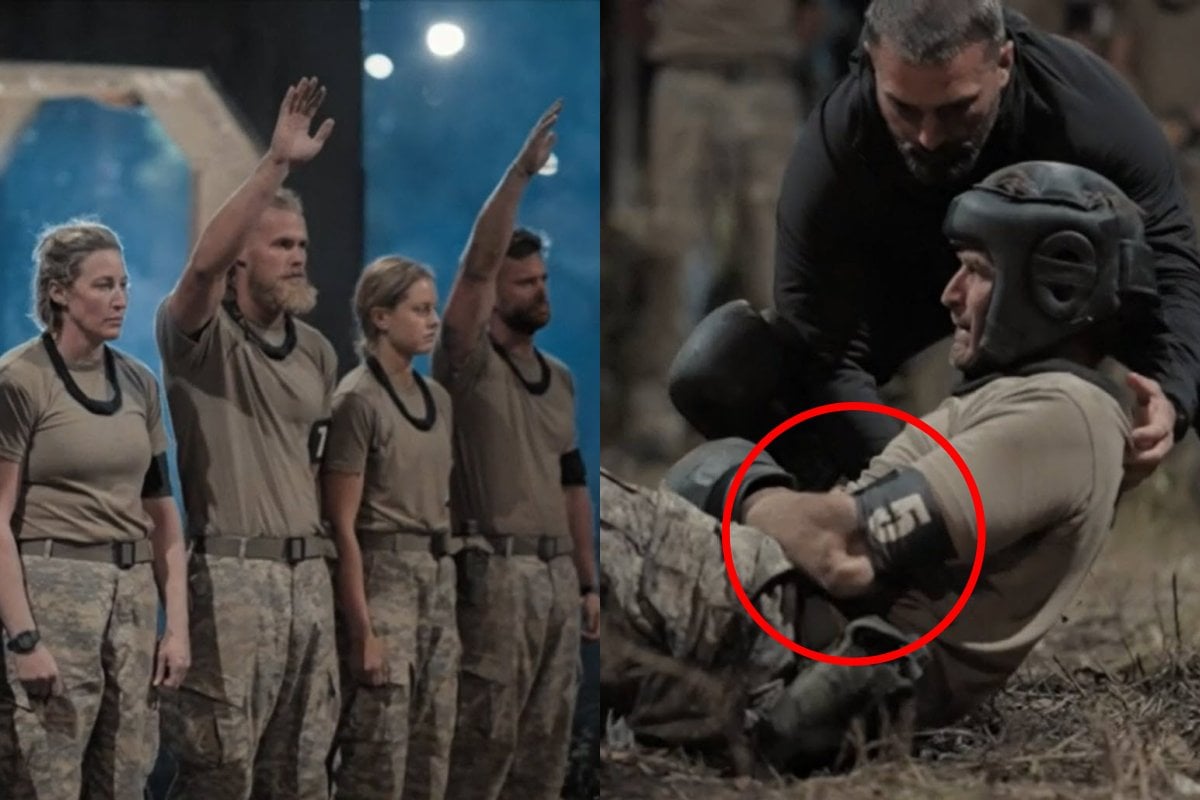 The angry British men have really bamboozled the recruits, who awake from a horrible night's sleep that did not include a physical challenge.

Cheater cheater pumpkin eater Koby Abberton is still going on about how he didn't cheat, or maybe he did cheat, but 15 push-ups isn't enough to judge his integrity off of and this man... doesn't get it.

Today's episode is about... aggression... so they have to... jump out of a helicopter via a rope and rescue a casualty from a nearby building. 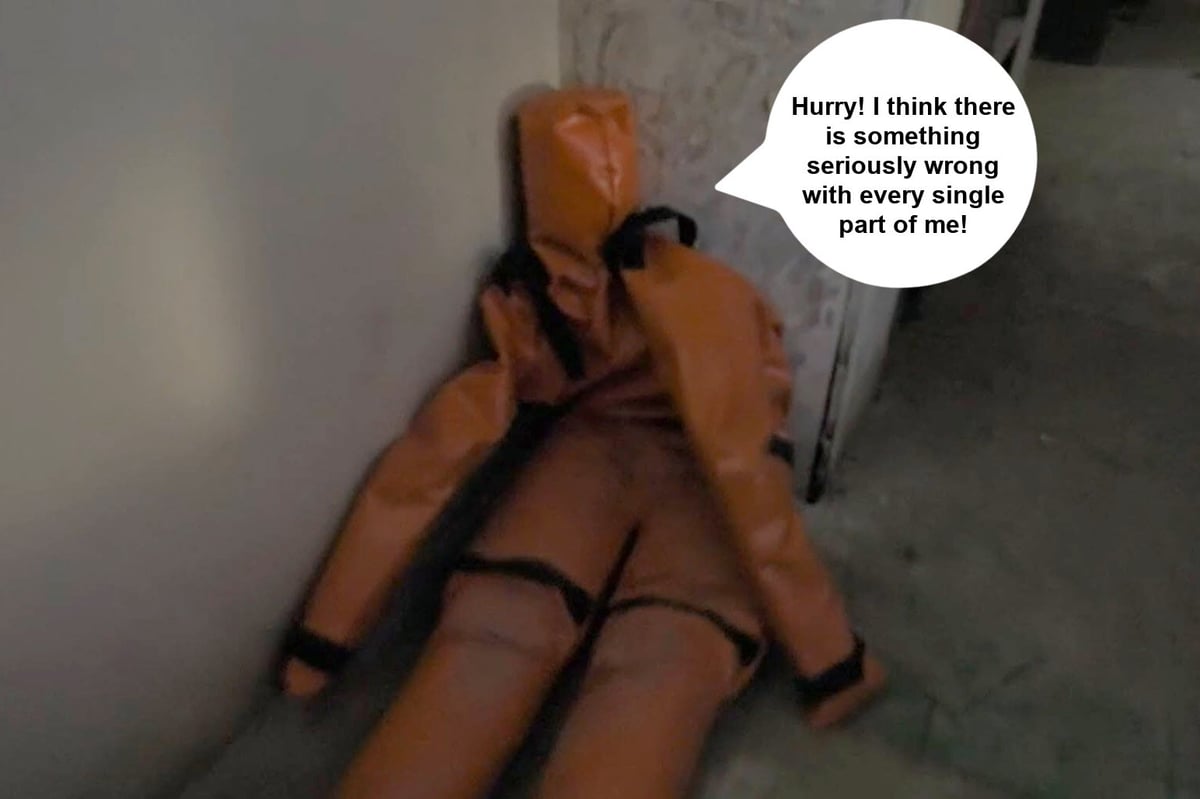 I don't quite understand the aggression link until I realise they're going to be working in pairs and Koby has been partnered with Dan Ewing.

I WOULDN'T MESS WITH A RIVER BOY IF I WERE YOU.

Koby keeps leaving his teammate behind, and then they are too focused on saving the first casualty that they fail to see a second one, who Angry James Bond informs them is now going to have their head chopped off and sent to their family. 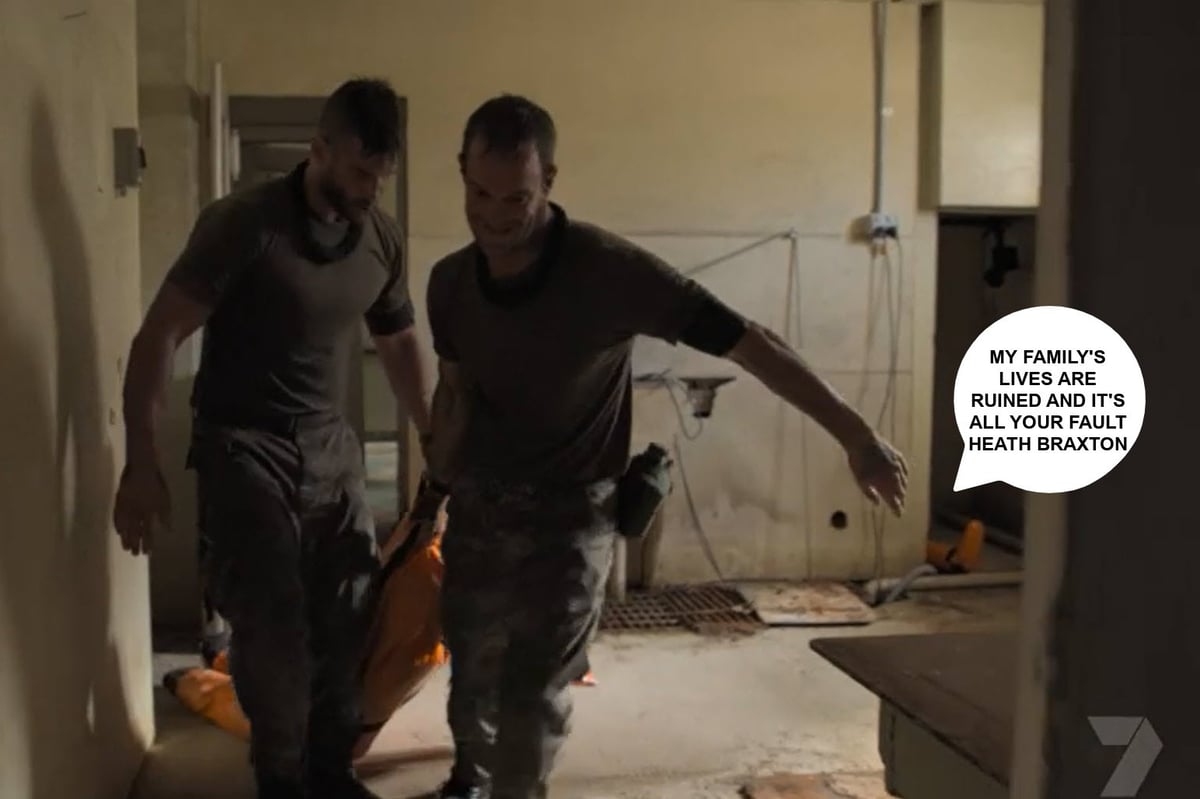 Next, Sam Burgess and Isabelle Cornish run around the abandoned building shouting out to the casualties.

Unfortunately, they do not get a response because the casualties are severely injured and also not human.

They save the one left behind by Dan and Koby, which is an enormous relief for their family, but unfortunately the other casualty is the one about to lose their head this time.

Angry James Bond yells at them about how they're going to have to tell the yellow person's family they're dead and also probably to avoid the courier for a little while.

Next, Mark Philippoussis and Jana Pittman save both casualties. There will not be any heads in the mail on their watch! 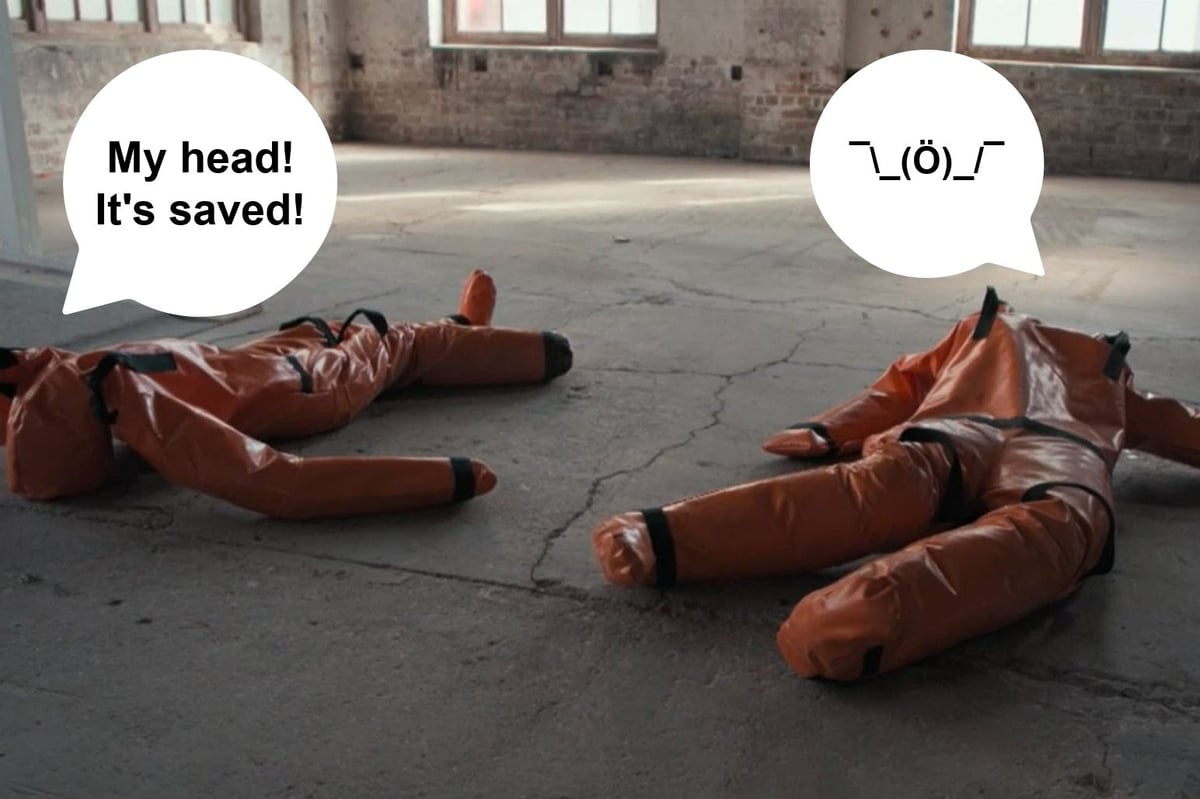 Or perhaps they were too late. Image: Channel 7.

Koby then grills Mark on how they successfully saved not one, but two yellow inflatable people from having their heads chopped off and Mark's like, 'you do what you gotta do to save random families from receiving heads in the mail'.

All of this ~tension~ is certainly building up to something isn't it. I think it will be bad for Koby but good for us, who are watching this show for entertainment and also a little... schadenfreude.

But before we can watch some prime-time television violence, we have to see the rest of the celebs get yelled at by Angry James Bond for leaving one yellow person and their head behind.

The only other pair to save both is Jessica Peris and Pete Murray, making two casualty dummy families very, very happy.

Back at camp, we have to watch Heath Shaw and Alicia Molik empty the group's toilets... which is effectively just a bag in a hole in the ground. And that bag... bursts.

AND THEN THEY SHOW US THE CONTENTS.

Channel 7. THAT WAS HIGHLY UNNECESSARY.

We are watching this show to see celebrities go through sh*t, not to see their ACTUAL SH*T.

Inside the group's HQ, someone is talking sh*t.

Koby is grilling Mark about his tennis earnings which should be awkward, except for the fact that Koby doesn't know awkward.

Meanwhile, Angry James Bond is asking the team doc for some intel on Mark, who is active but lacking... drive.

You know what this means, right? Ol' mate Mark is hauled in for questioning, but without the highly unnecessary black hooding.

He tells a mostly calm James Bond that he lost his love for tennis in the latter part of his career, especially after being passed over for sponsorship even after his best year in the sport.

Suddenly, the doctor starts talking about external factors and internal happiness and EXCUSE ME BUT WHO ARE YOU? 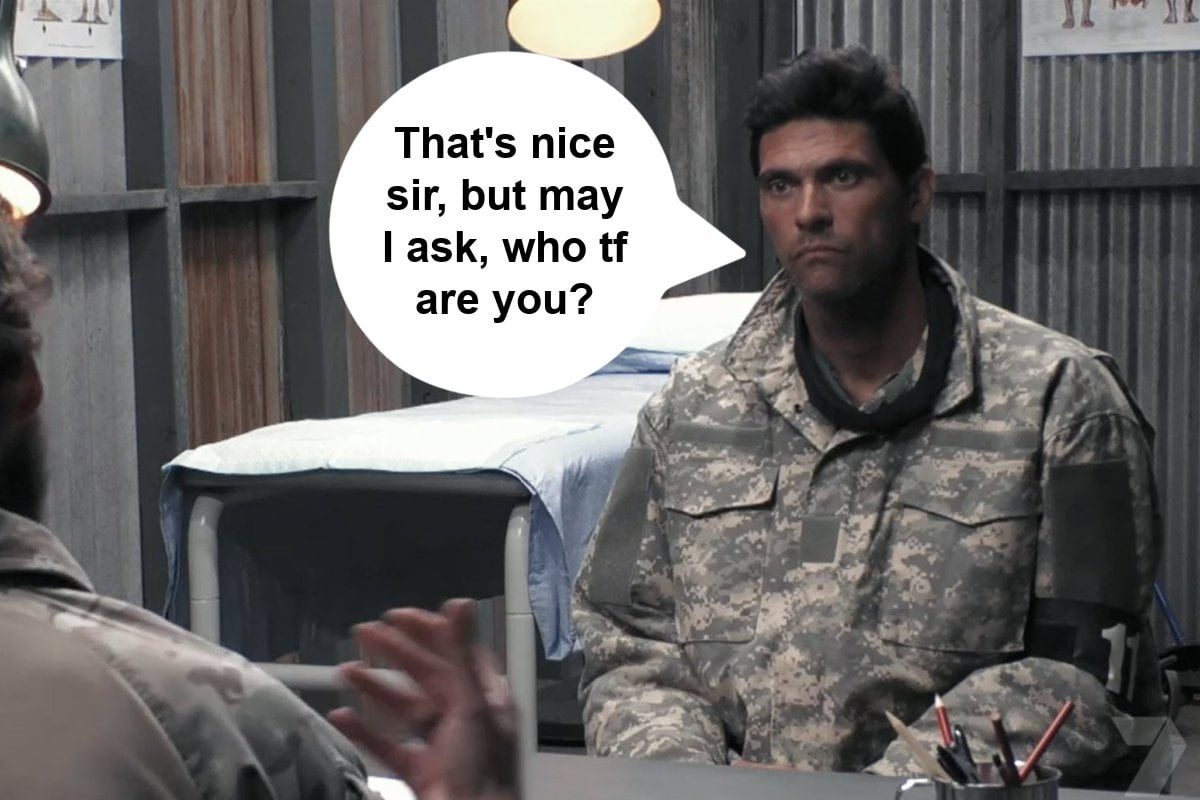 And where is your accent? Image: Getty.

He is not angry, nor is he British.

I don't know what to do with him.

Angry James Bond is just sitting there, listening to it all with a bit of a... smile. 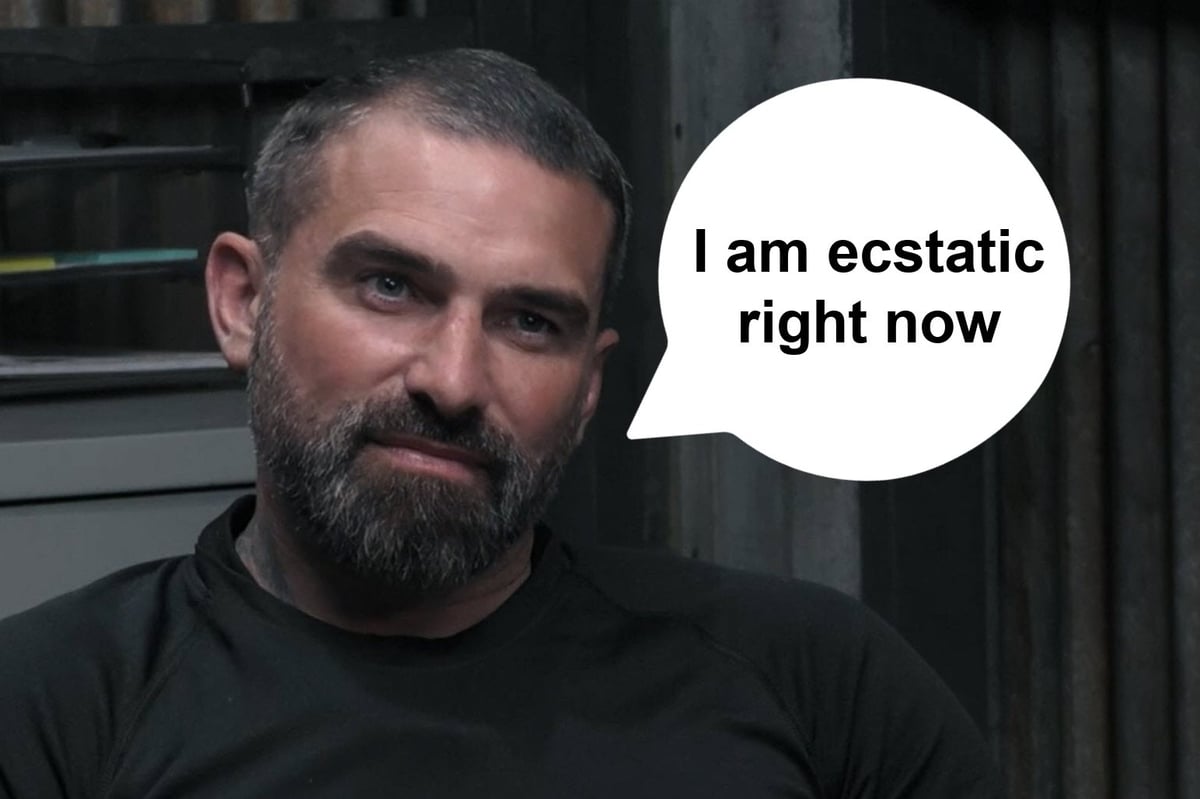 This is really weird.

Mark gets a pep talk about finding the fire within and it's all lovely and wholesome, until HOY BOY we are greeted by Sam Burgess' literal arse.

Okay, then suddenly there's a collection of arses.

Cool, cool, cool. Has anyone checked this show's time slot?

Then suddenly it's 9pm, and IT'S TIME TO LITERALLY PUNCH EACH OTHER IN THE FACE.

Heath is pulled out of the line-up and told to pick an opponent. Without missing a beat he calls out Sam, which is... bold. Brave. Impressive. Not at all the move I would've made. 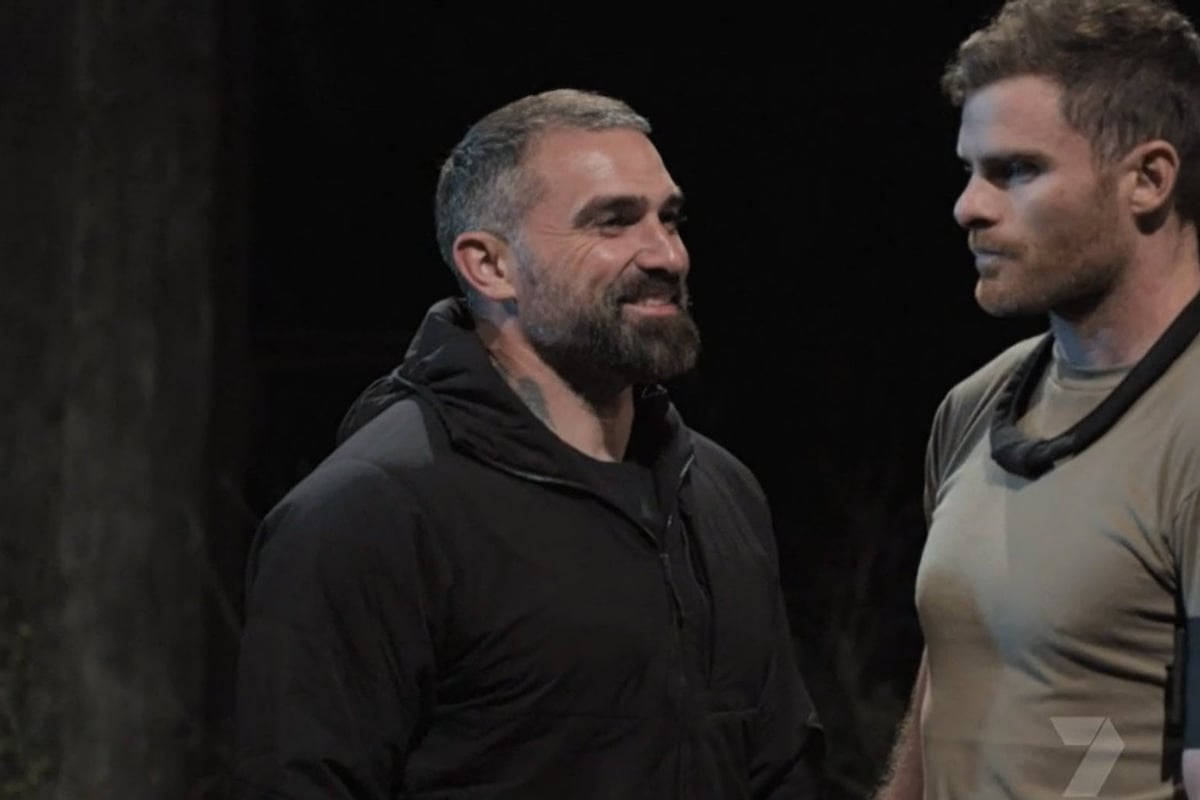 Then they start punching. 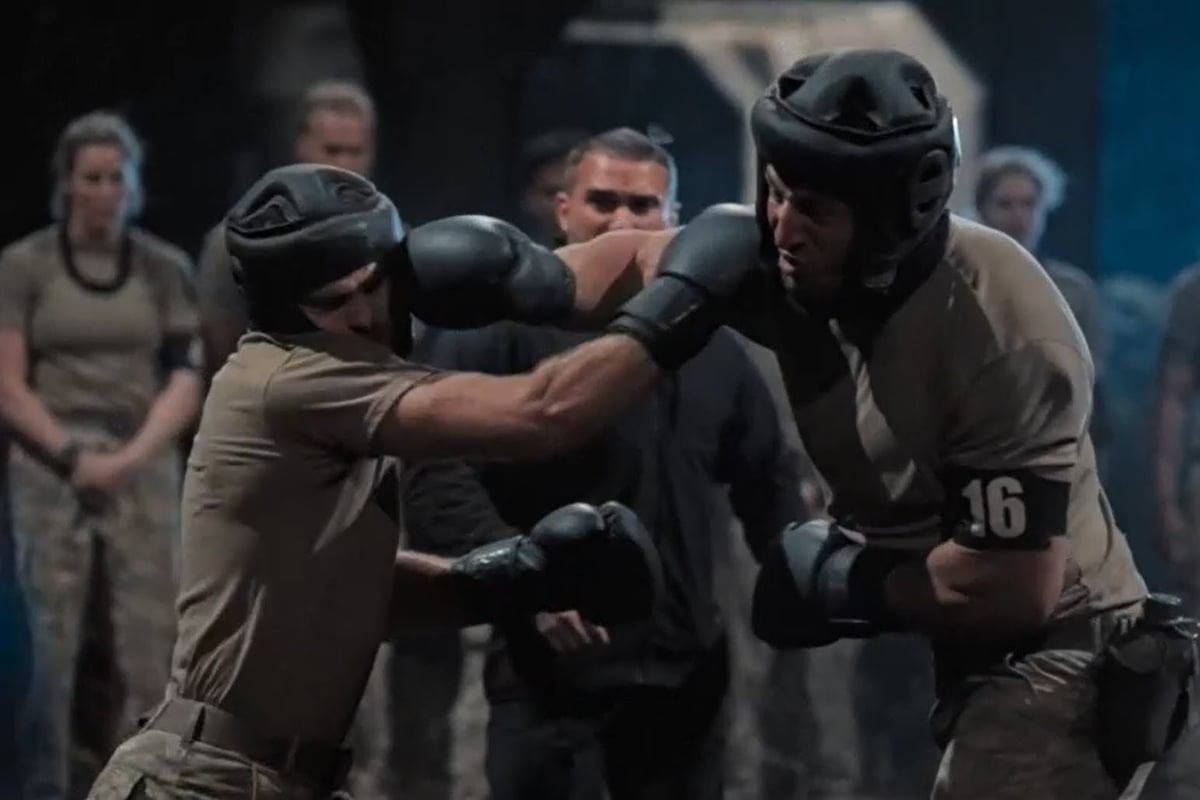 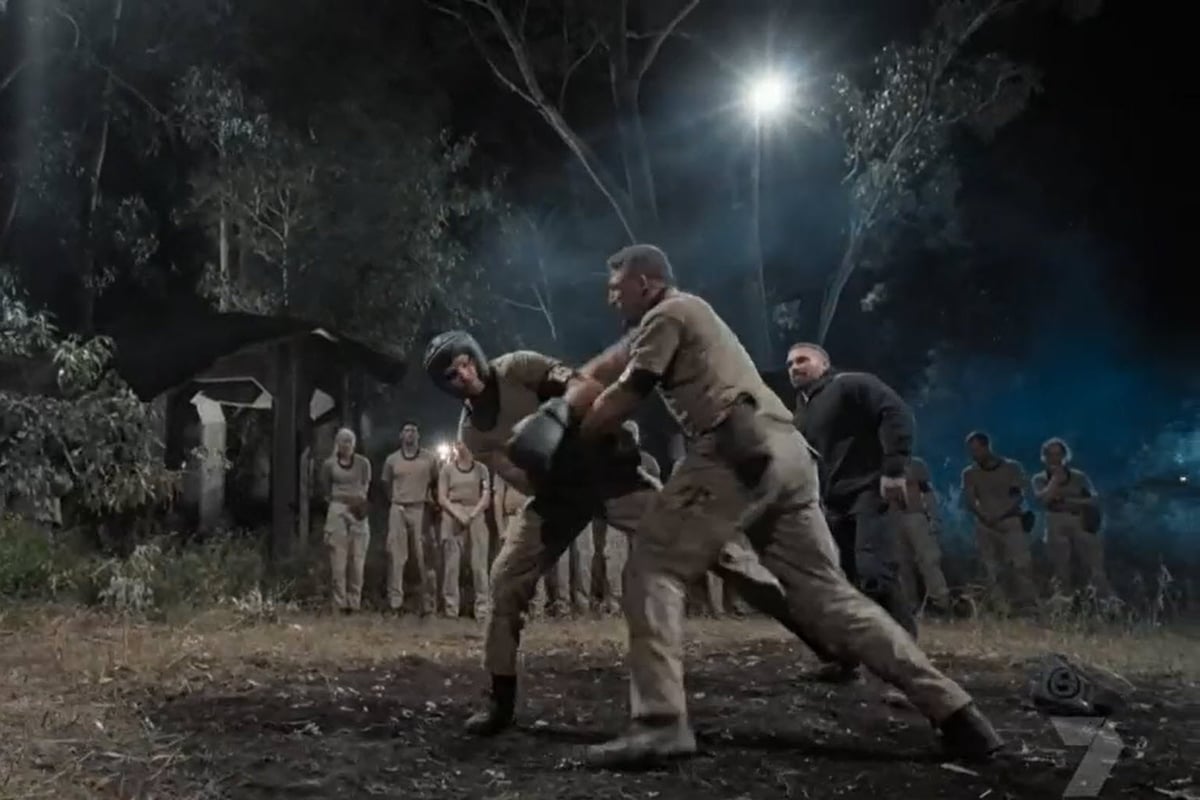 Next, Koby is called out of the line.

Angry James Bond asks who wants to fight him, and it's like a scene from The Hunger Games.

Dan is selected, and it turns out, a real Bra boy is a better fighter than a fake River boy. I have to admit I'm disappointed.

Kerri Pottharst fights/runs way from Jessica, the others all whack each other in the face and then, Mark and Pete fight... which results in Pete dislocating his elbow. 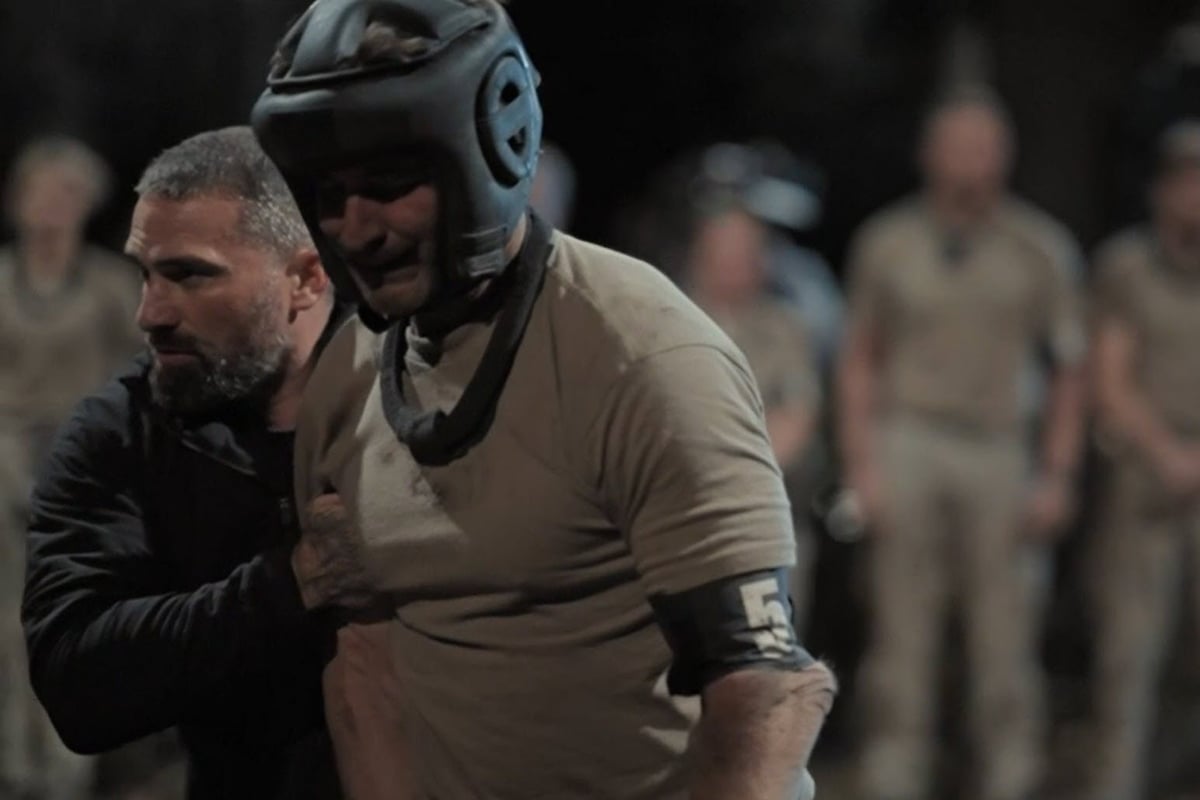 UNDER NO CIRCUMSTANCES SHOULD THAT BE WHAT AN ELBOW LOOKS LIKE!!!! Image: Channel 7.

Pete isn't even crying a little bit, but the doctor tells him he has to go to the hospital for x-rays meaning he will need to be medically discharged.

That was distressing but... nope, the fighting will not stop for even a very misplaced elbow.

In the final fight, Jana and Alicia get at it, Then suddenly, Alicia stops, takes off her armband and withdraws.

Another one bites the dust.

Back at camp, Pete and his elbow are preparing for a trip to hospital. Angry James Bond transforms into Supportive James Bond, offering him praise for committing to the fight. It's just a shame his elbow tried to... escape. 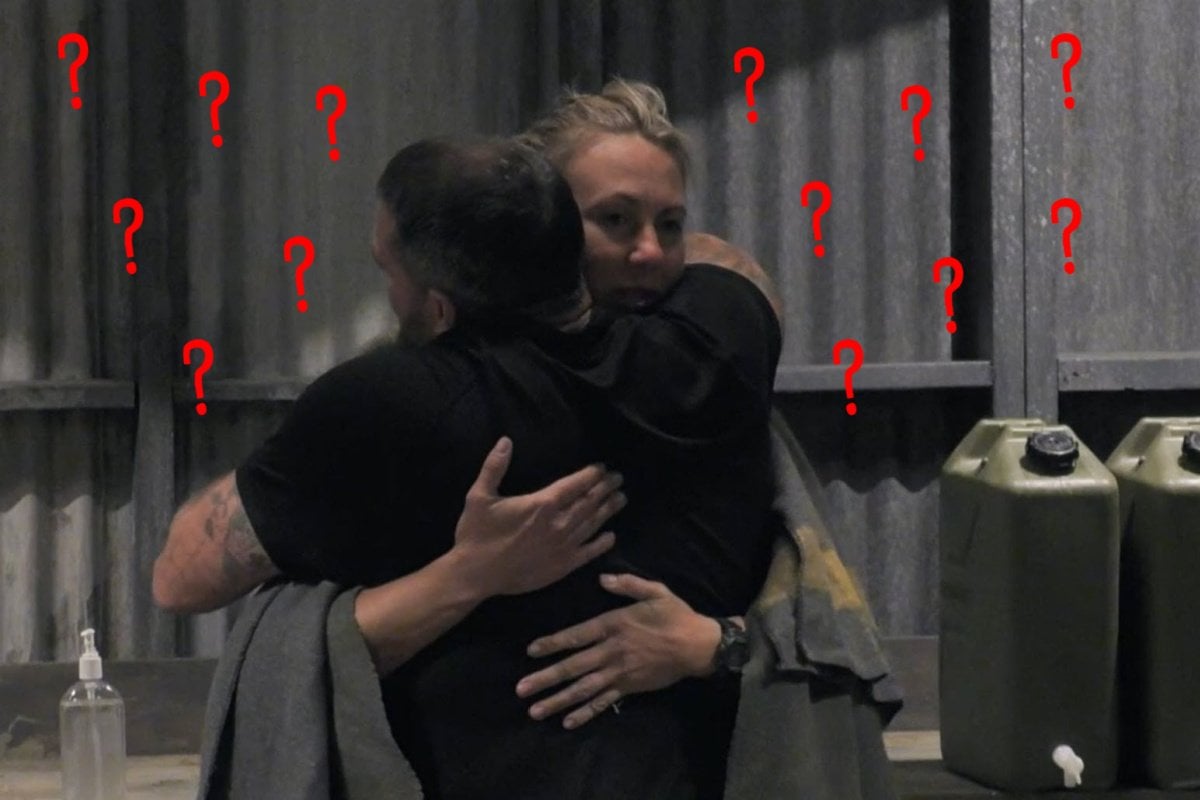 He bids her farewell, kindly, and I have to ask, WHAT THE HELL HAVE THEY DONE TO ANGRY JAMES BOND?

Please get back to yelling in people's faces tomorrow night, staff.