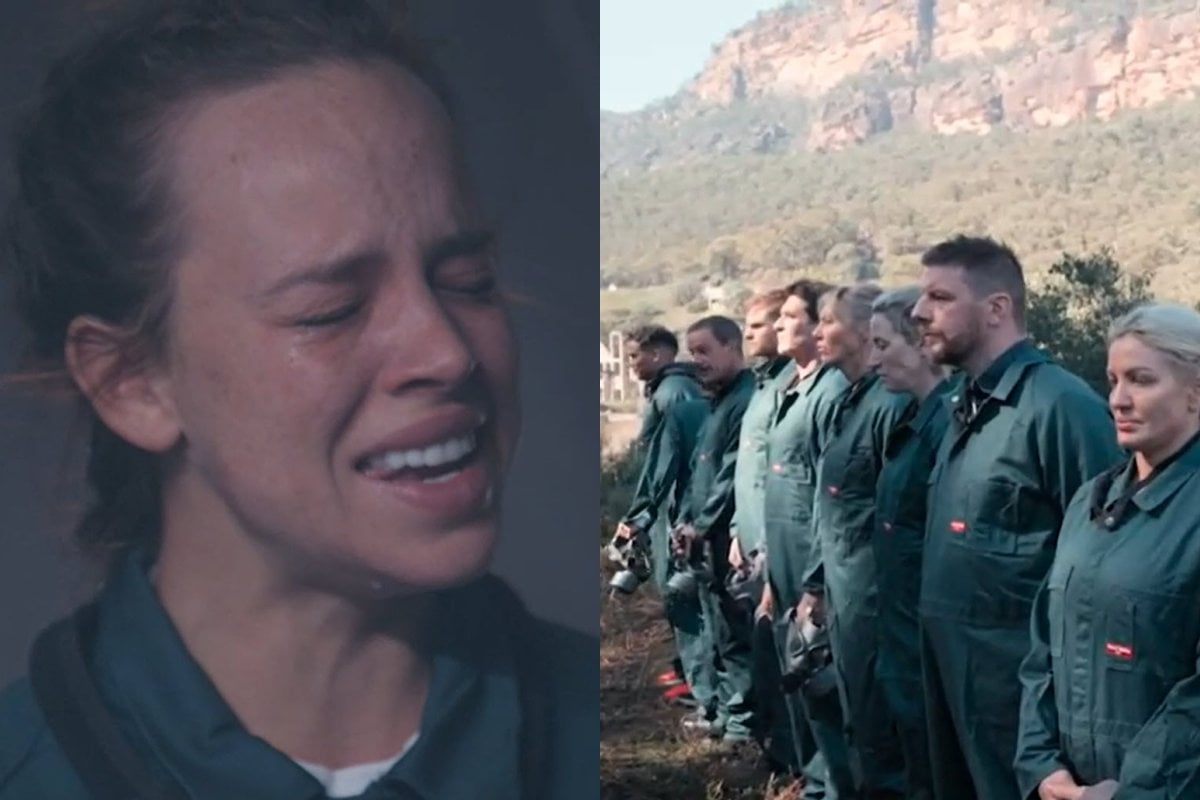 I don't think anyone expected we'd enjoy watching celebrities jump out of helicopters enough to warrant a second season of SAS Australia, but we did and so... here we are.

Here we are, with a new group of semi-celebrities (and certified A-lister, Manu Feildel) joining season two of the show where English men yell in their faces and make them punch each other.

It's been a bloody grim few months and honestly... is this what we need right now? I don't know.

We open with Ant, who is still very much giving off angry James Bond vibes, saying the recruits are in for a horrible time. 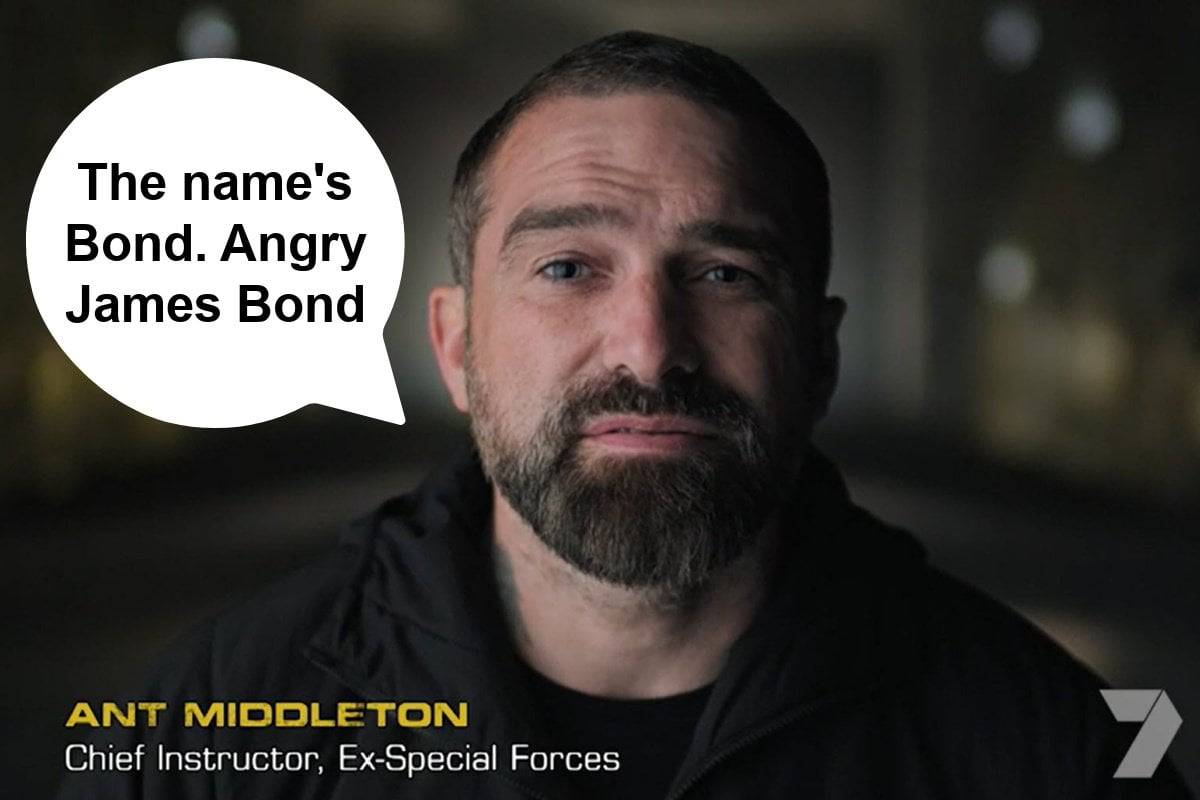 Who let you in the country? Did you have to spend 14 days in a hotel? Who did you yell at during that time?

Anyway, the recruits arrive at an undisclosed location which is definitely just the Blue Mountains. The black hoods are pulled back to reveal faces that are supposed to be... familiar.

Tennis player Mark Philippoussis' hood is removed first and an angry British man asks him what the f**k he's looking at. UH, MATE. HE'S LOOKING AT YOU. WHERE IS HE MEANT TO LOOK? YOU'RE TWO INCHES FROM HIS FACE.

Next is a woman called Brynne who says we probably know her because of her marriage to Geoffrey Edelsten. Sorry but... no.

Then it's my boy Manu. An icon. I hope one of the British men yells "WHERE IS THE SAUCE" in his beautiful French face.

Angry James Bond says "there he is" when he pulls off the hood of everyone's favourite Home and Away River boy Heath Braxton and honestly, same. 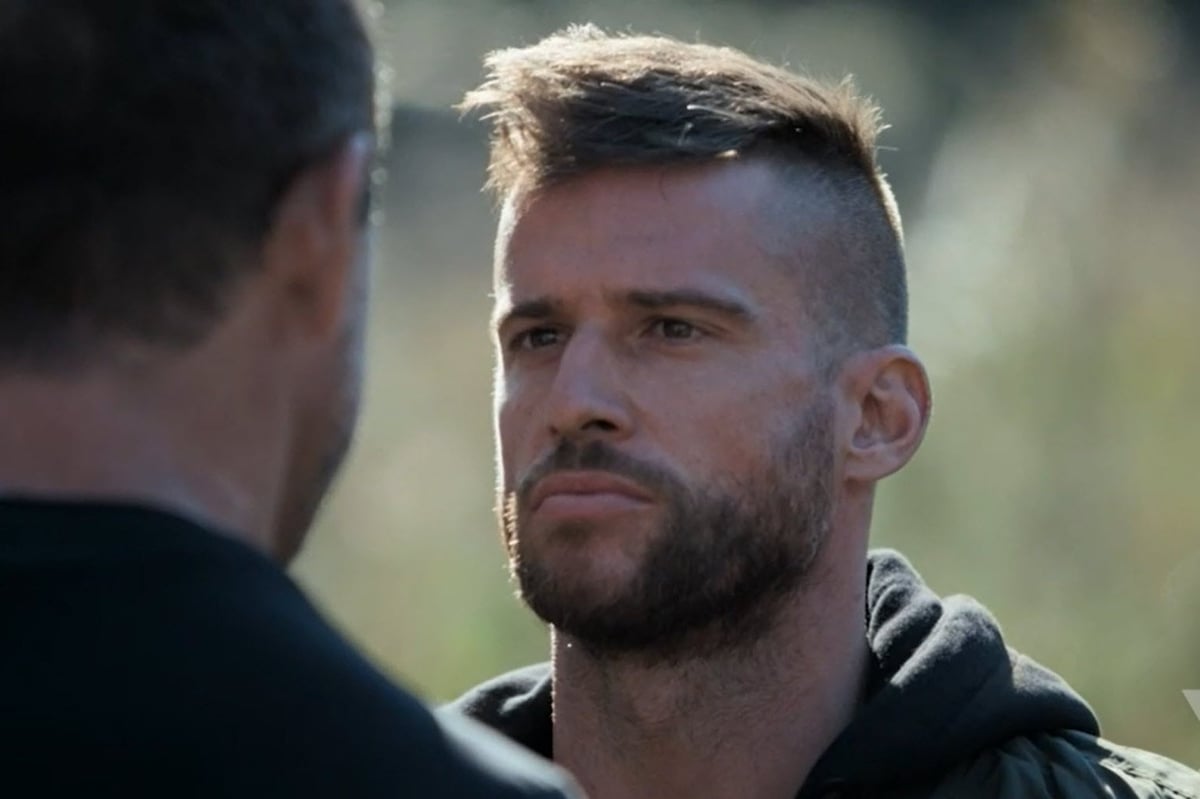 Oh god. Last is Sam Burgess, who says he's felt like a loser for the last 18 months and he's on this show to try to be a winner again. Okey dokey.

The alleged celebrities put on green jumpsuits, and Angry James Bond yells about turning them in bouquets. ¯\_(ツ)_/¯

Holy s**t, they're about to get tear gassed.

AND IF THEY PANIC THEY WILL PASS OUT AND ANGRY JAMES BOND WILL HAVE TO PULL THEIR TONGUES OUT. OR SOMETHING.

THIS SEEMS LIKE A TOTALLY FINE THING TO PUT ON OUR TVS FOR ENTERTAINMENT PURPOSES.

He says, and I quote, "everyone thinks they're hardcore until they get gassed."

WHO? WHO THINKS THEY'RE HARDCORE UNTIL THEY GET TEAR GASSED? LITERALLY HOW MANY PEOPLE HAVE YOU TEAR GASSED IN ORDER TO MAKE THAT STATEMENT?

Everyone is made to tell another angry British man their name and what they do while coughing and spluttering, and it serves absolutely no purpose whatsoever.

Angry James Bond does some more yelling and could this be a super spreader event??? 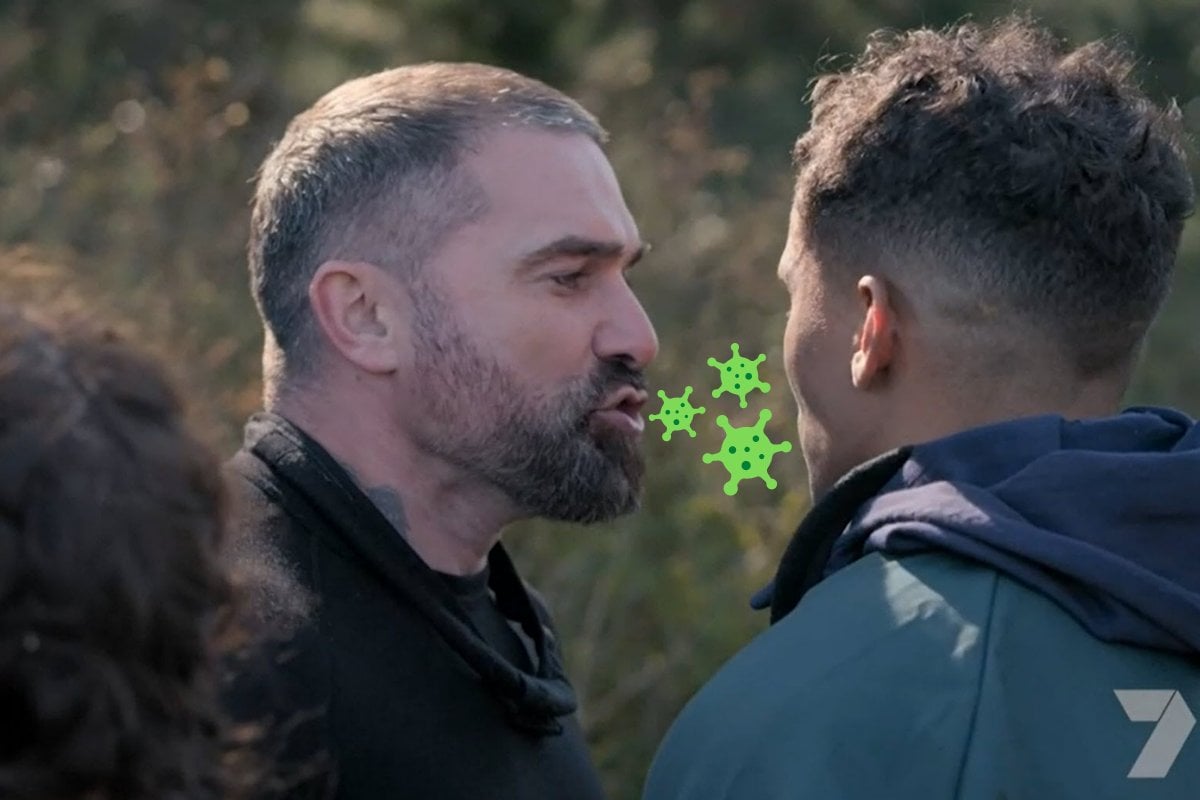 They then have to strip down to their underwear and run. Gassing, I think I could handle. But running in a bralette? I'm tapping out.

The alleged celebrities are given numbers as identifiers, which is a relief as I was struggling to recall the names of at least three quarters of this group.

They're hosed down, forced to... get naked on national television and given a tour of their bloody grim camp. 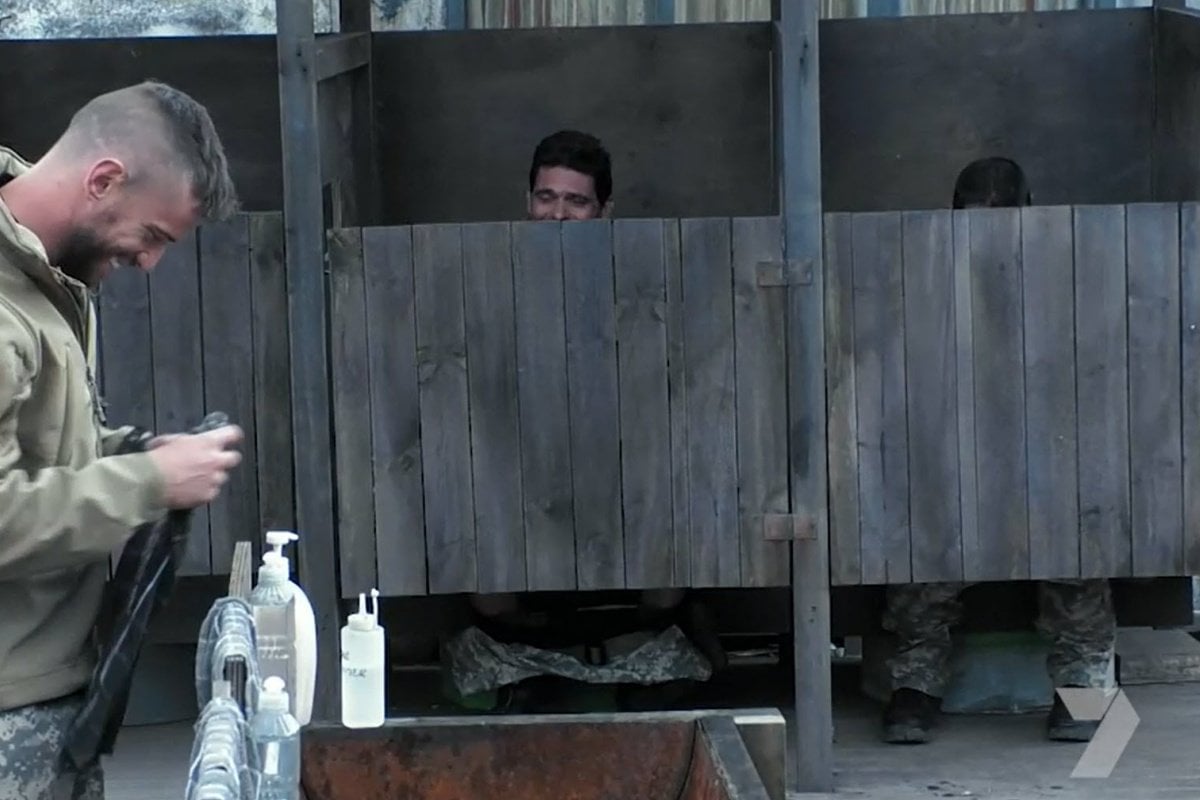 The angry British men gather and decide everyone is a bit s**t, but Sam Burgess is the most surprising s**t, so they haul him in for interrogation.

Burgess explains how he was forced to retire from NRL due to a shoulder injury, and two days later separated from his wife.

He says he's not great at managing emotions and it led him to spiral into drugs and alcohol, which all played out in the media. Yes... we... recall.

Then Angry James Bond says he can relate?? He didn't even yell a tiny bit?? I honestly didn't see that coming. 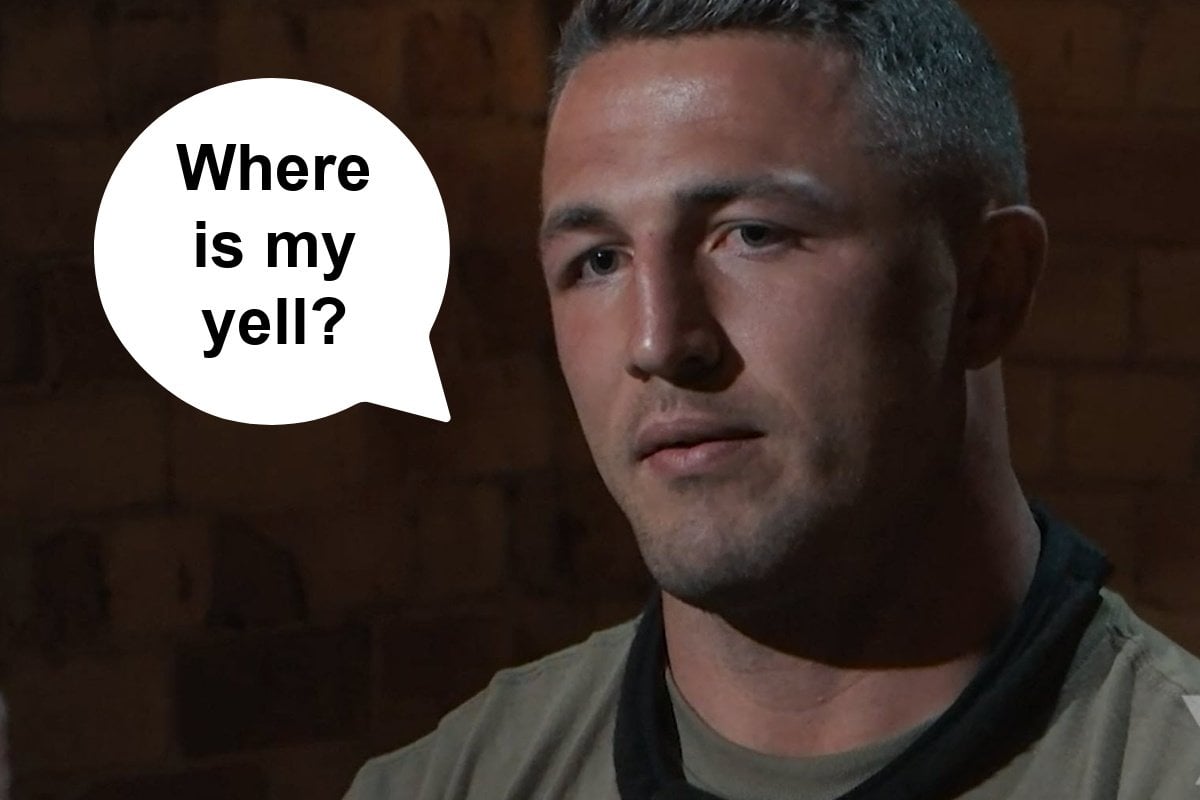 "I was expecting some droplets too." Image: Channel 7.

It's day two, and it's time to... not jump out of a helicopter. Instead, the alleged celebs must... use a ladder balanced under the helicopter to... climb? across? like monkey bars?

Manu says he thinks he can handle the pressure of the SAS course because being a chef is stressful, and so was having to sit next to Pete Evans for years. 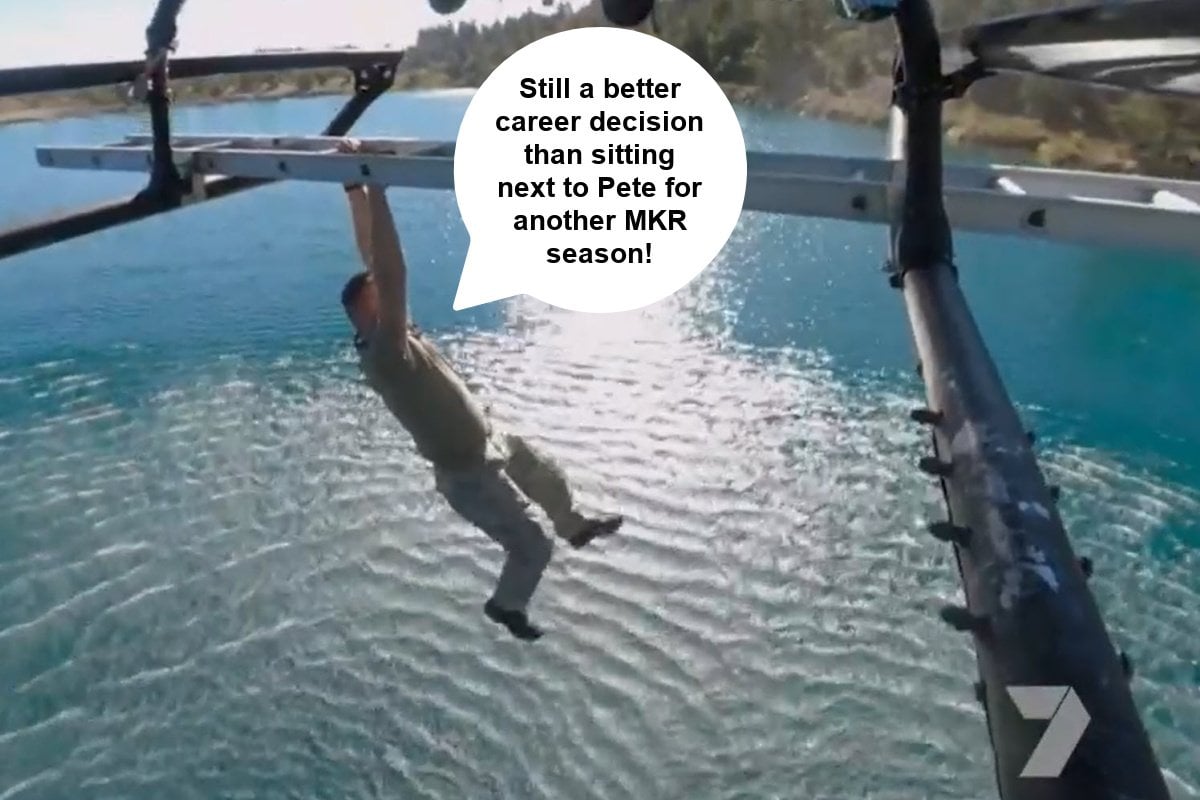 So does pretty much everyone else except the athletes and Dan Ewing, who likes to meditate and talk in third person a lot.

Last to attempt the challenge is tennis player Alicia Molik. She does it pretty easily and is obviously pleased with herself because she begins to celebrate before getting back into the helicopter.

Angry James Bond does not like this, so he... pushes her off.

On land, Angry James Bond is really living up to the name. He yells in her face and makes everyone run two kilometres back to their transport with 20kg bags on their backs.

Brynne is struggling to keep up. I don't want to say I saw this coming, but I didn't... not see this coming, ya know?

There always has to be a high maintenance blonde woman who struggles at physical tasks. I think that's in the production handbook. 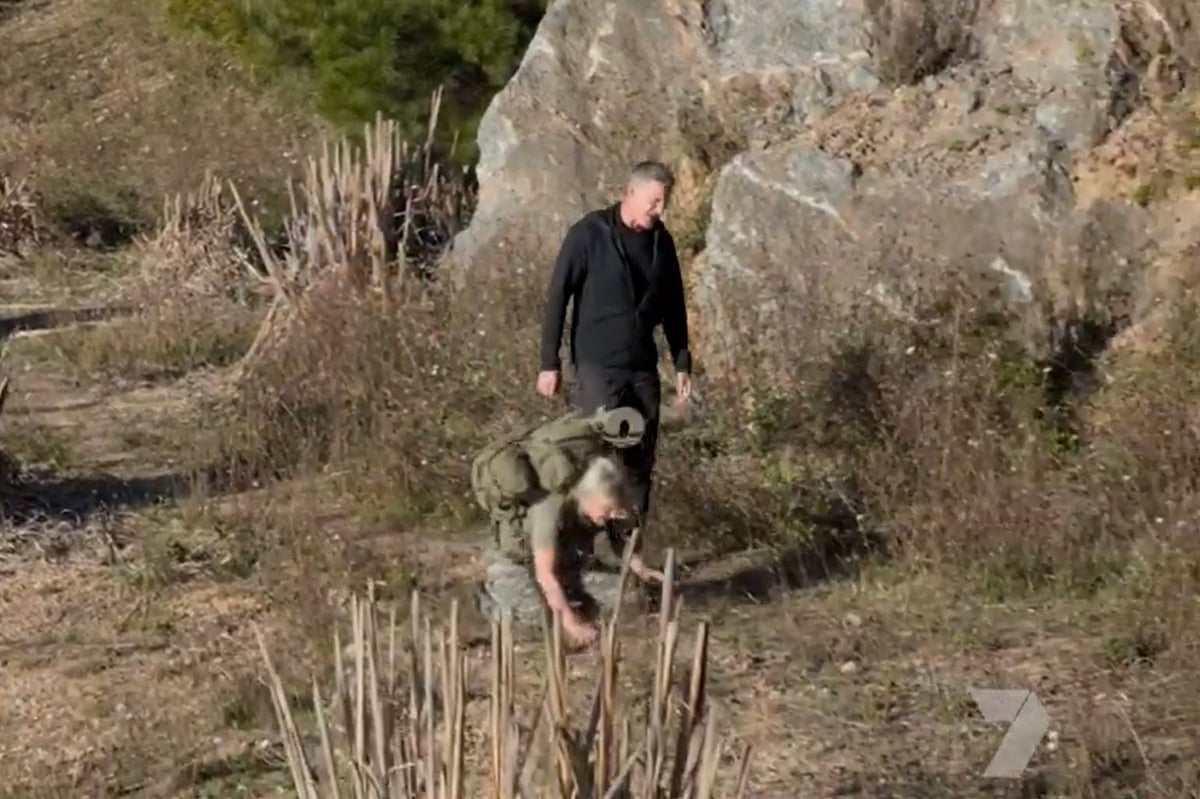 Back at camp, they're forced to do a 'beasting' as punishment. It's literally just a plank, but they've given it an angry name. Because of course they have.

Brynne hands in her number band and becomes the first person to drop out of the course.

Maybe for season three, they can cast the obvious weakling designed to make us go 'ha ha of course she can't do it' as a brunette. Just to keep us on our toes.

Later, the angry British dudes are yarning and decide to bring Alicia in for a yarn/interrogation/another non-COVID-safe spit spray.

She arrives and Angry James Bond says he's very disappointed in her because she's an ex-tennis player who should know the importance of discipline. He asks if she'd do the same as him if one of her tennis students acted like she did today, and she says she would.

But that feels like a lie because no one would push a literal child off a helicopter?? 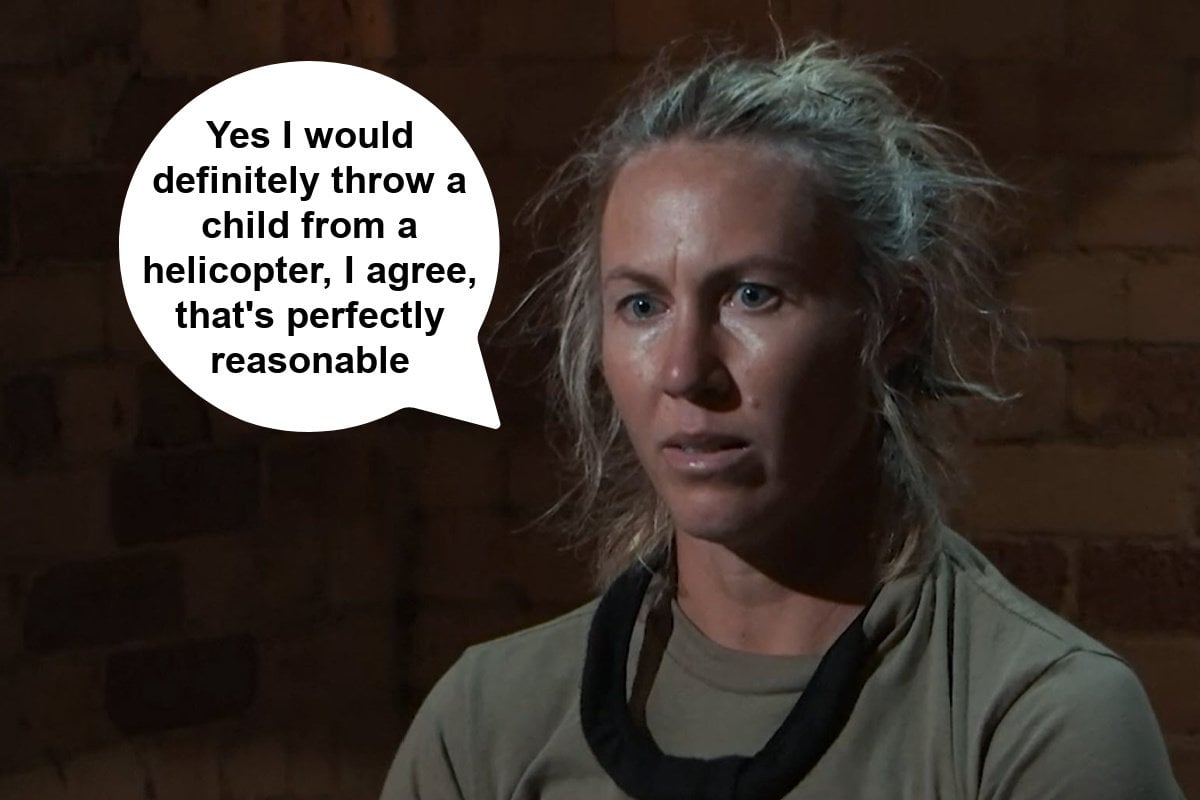 Anyway, she's not here to f**k around blah blah blah IT'S OVER AND NO ONE EVEN GOT PUNCHED IN THE FACE.

A
amymonty a year ago

Reply
Upvote
The entire point of the show is to treat them like this is REAL SAS training and that is what SAS training is really like. Not even just SAS, even basic Navy and army tear gas you for training.
What's better is there are actual SAS simulation training courses that cost thousands and they're designed to build resilience and can also be done as a corporate team building. Like WTF
T
talezassian a year ago

Reply
Upvote
1 upvotes
My wife wanted to watch this. I didn't enjoy it - the staff are speaking as if these  people are really training for the SAS, but the simple fact is, they're not - it IS actually a TV show and it IS entertainment, not life & death. And the SAS as an organisation hasn't exactly covered itself in glory in terms of how it treats people, so it's not like they have a lot of credibility to start with.
Resources
Very Peri
News
General
Opinion
True Crime
Politics
Sport
Explainer
Entertainment
Celebrity
Reality TV
Movies
TV
Books
Rogue
Royal
Lifestyle
Beauty
Fashion
Weddings
Home
Wellness
Health
Fitness
Travel
Food
Family
Before The Bump
Pregnancy
Baby
Kids
Teens
School
Parent Opinion
Work & Money
Money
Finance
Career
Lady Startup