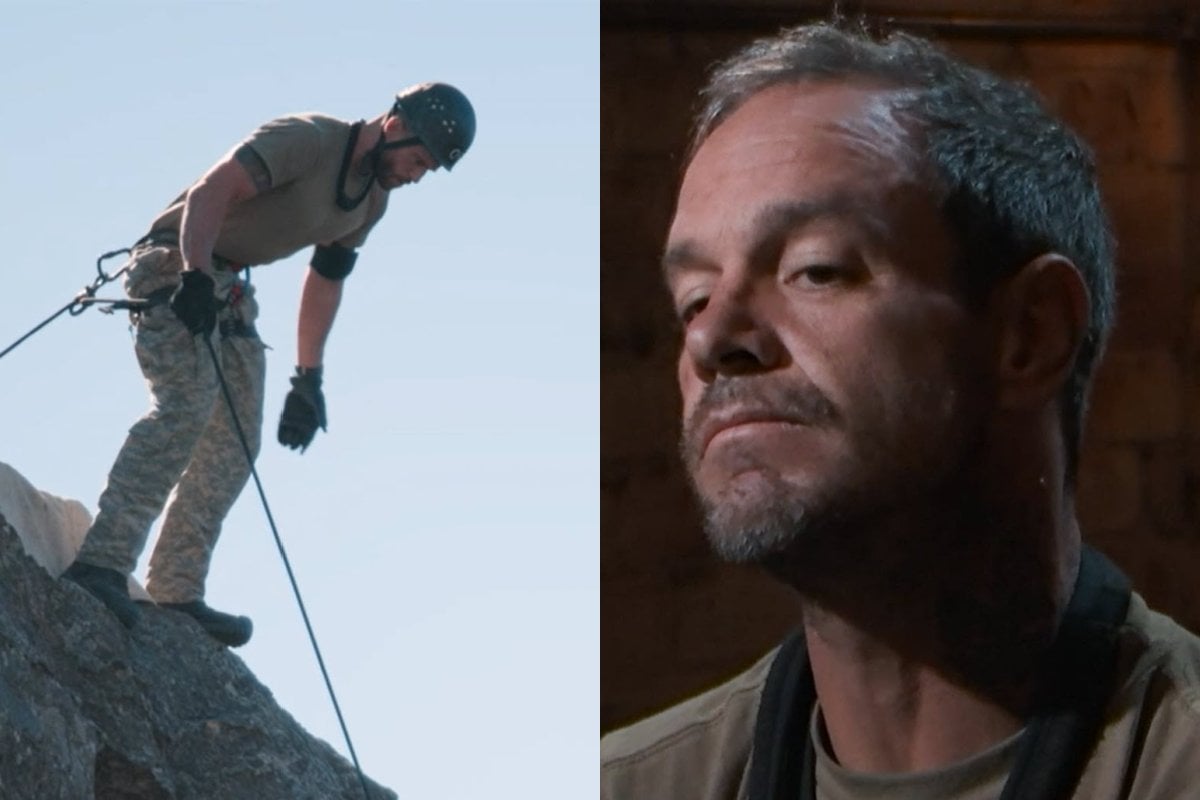 Koby Abberton is a very understanding, chilled out duty recruit.

He only yells a little, because sh*t has changed around here and from now on, the recruits must write down their desires for more Voltaren.

The day's first challenge is forward abseiling down a 90-metre cliff.

Not to brag, but I once absolutely nailed abseiling at my year six school camp. Yes, it was backwards, and yes, I was a literal child so it was probably like... 10 metres. But still. I just need you to know I'm sufficiently qualified for my upcoming critiques.

The fearless Dan Ewing is first up and he switches between running a 100m sprint down the side of a cliff and rolling down a hill on a piece of cardboard.

Jana Pittman, a.k.a Bambi on ice, makes it down the cliff, but it's... not pretty.

John Steffensen gets up to the cliff, takes his first steps down and then...

That genuinely sent a shiver through my whole body. 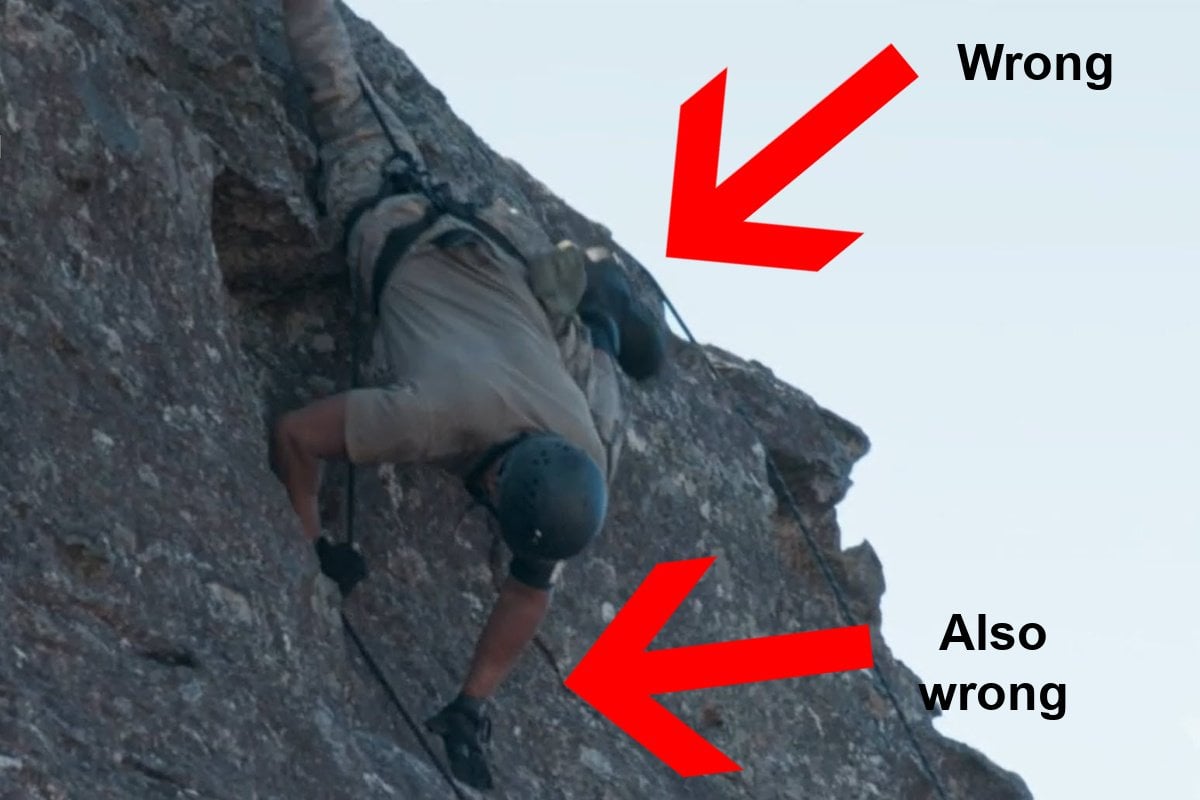 John gets himself back up and makes his way down the rest of the mountain with relative ease, and about 40 new bruises on his front.

Isabelle Cornish comes as close to 'smashing it' as anyone so far, and is the first person to officially pass the task.

Mark Philippoussis and Jett Kenny seem to make it down without whacking their bums and/or faces on the rocks, which is... good. Sam Burgess' butt is not so lucky.

Last up is Koby, and he starts off with his back arched so much he looks like a cat when it's about to vomit. Sorry.

He finds some momentum and transforms into a Texas cowboy, which the angry British men DO NOT LIKE ONE LITTLE BIT. 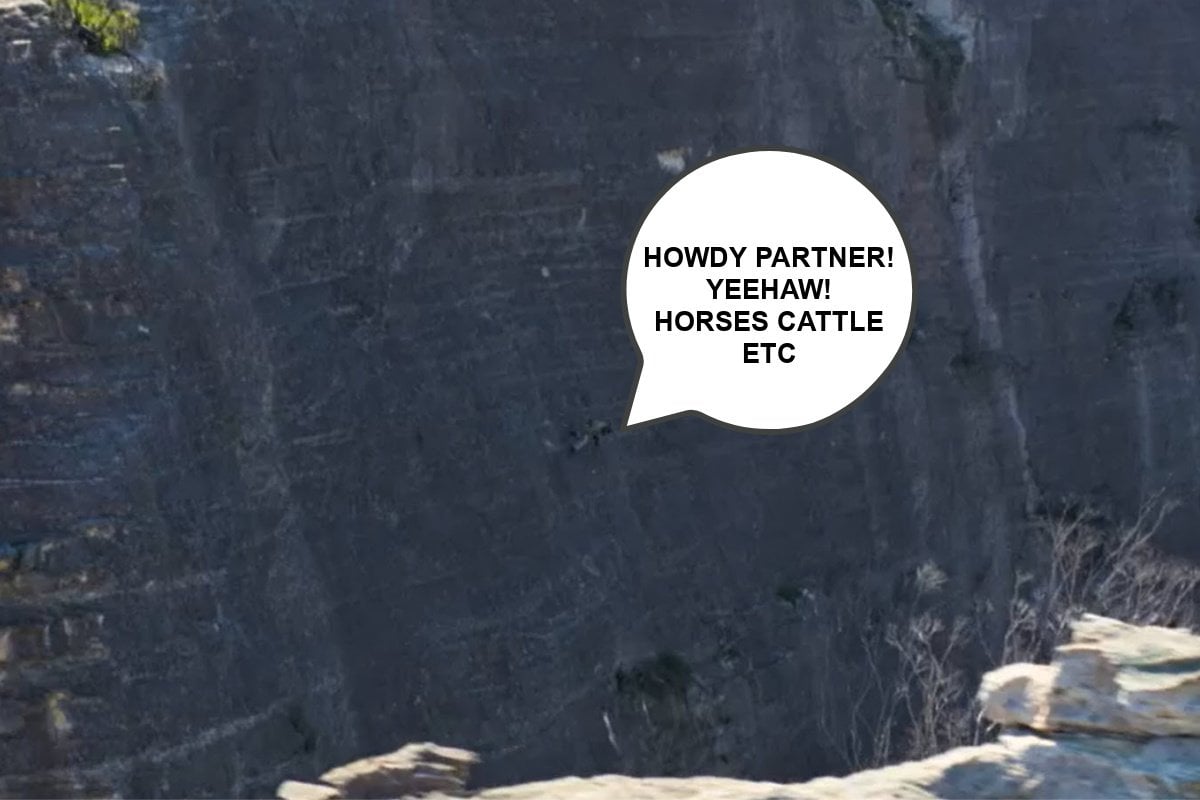 Koby is made to do burpees in amongst some greenery, and one of the angry British men calls it "the old biodiverse burpee".

Line of the season. Someone yell "GOOD ONE" in that man's face. 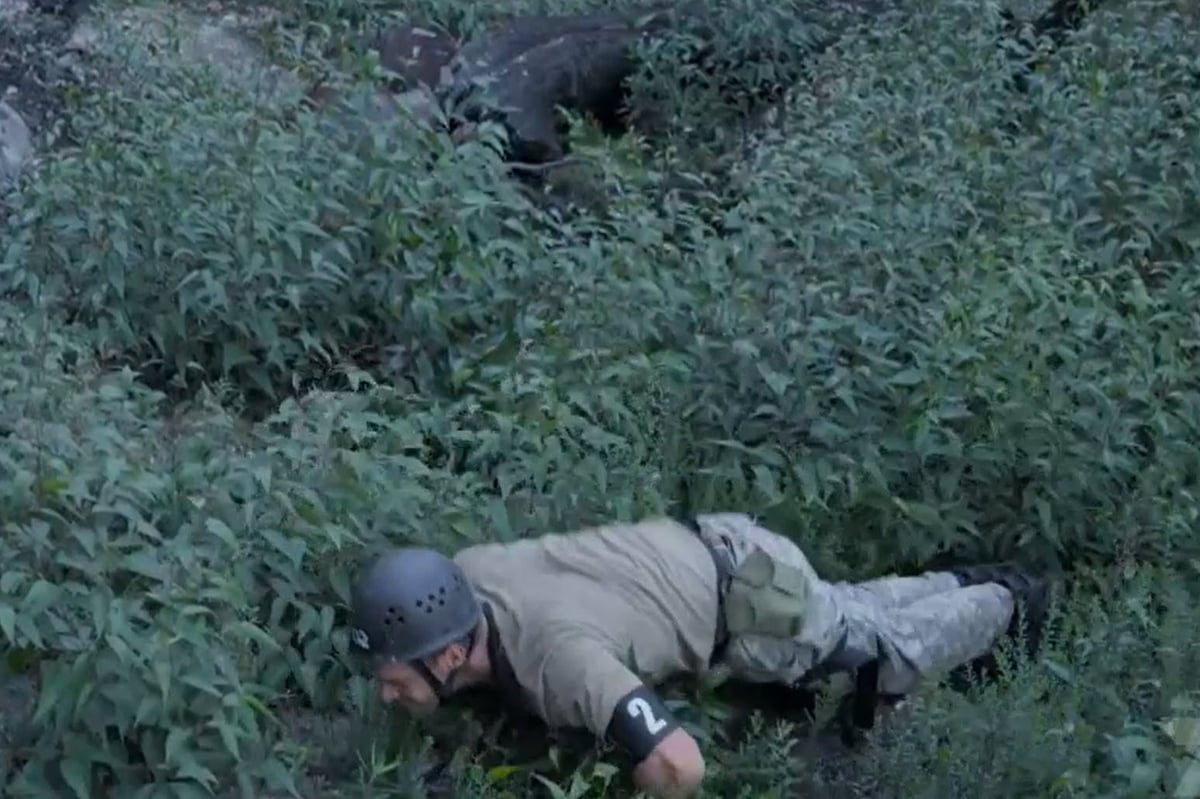 Back at camp, Koby is complaining about taxes and ScoMo's lack of knowledge about beer when he's hauled into an interrogation.

He talks about the history of the Bra Boys, which he says brought together a number of people from Maroubra who didn't have family, providing support and stability.

The angry British men ask him about his run-in with the law, which saw him charged with perverting the course of justice in 2004.

They kind of... all yell a little bit and Koby admits talking about the topic freaks him out.

"This man, Tony Hines, who was one of the Bra Boys, believed my brother had done something to his girlfriend," Koby says.

"He thought my brother was with his girl and then as it happened, they got into an altercation in a car and Tony was shot. What ended up happening was they went and threw the body over the cliff and drove back to my house and my brother came in the house covered in blood."

Police charged Koby, believing he knew more than he let on. He maintains he did not, because his brother regularly returned home covered in blood(?????????????)

I KNEW THIS SHOW WAS A LOT BUT I DIDN'T EXPECT IT TO BECOME SO CSI: MAROUBRA.

His brother was acquitted of the murder in 2005, as it was found he acted in self-defence.

"I was the only one who was found guilty," Koby says. "I didn't do anything."

He says he spent $700,000 on legal fees, lost sponsorship deals and his property, but he doesn't consider himself a victim and instead tries to focus on his life in Bali with his son and wife, who he wants to make proud.

The shellshocked British men tell him to knuckle down and fulfil the potential they see in him.

Let's get back to the regularly scheduled programming of British men yelling about weakness and fears and not murder charges.

For their next challenge, the celebs are split up into two teams: Charlie, and uh, Delta.

Mark is named leader of Charlie, and poor ol' Dan is given the dreaded job of leading team Delta. I've watched enough Gladys and Dan press conferences to know that is a job I wouldn't even wish on Sam Burgess.

The team leaders are given instructions which basically equate to 'you have to move through pitch-black tunnel system to pick up a very important box. Oh, and you're behind enemy lines so don't freak out or you'll die'.

Ahh, now we're back to normal!

Team Charlie go first and they're fine, until they reach a ladder Mark was specifically told to GO UP.

He can't really... tell it's a ladder, because of the PITCH BLACK DARKNESS, so begins to lead the team literally everywhere except where they're meant to go. 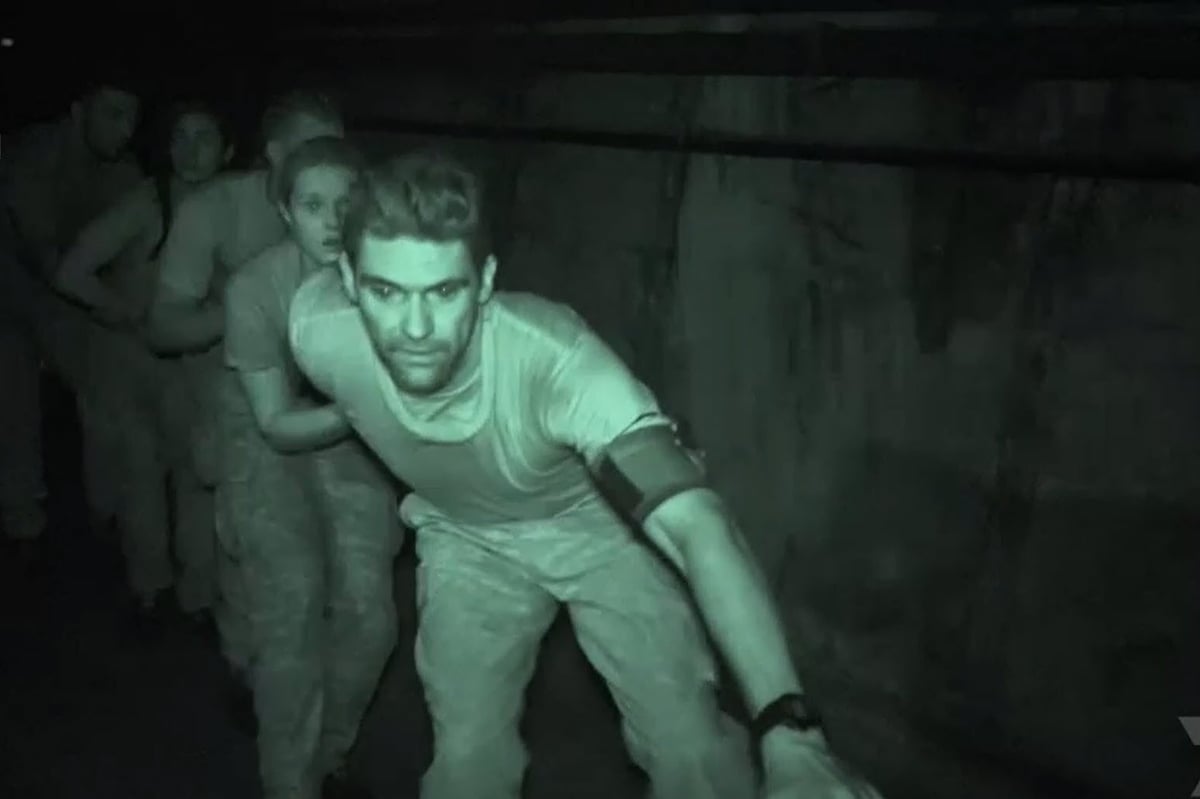 The most low-energy conga line I've ever seen. Image: Channel 7.

Eventually, one particularly angry British man has to steer them back to the ladder, where they finally make it to the 'cache'. They grab it and make their way back out the tunnel, without a light which would've made their lives much easier.

After 40 minutes, the angry British men are getting hangry/tired/probably need to pee, so they call time of Team Charlie's big ol' FAIL of a mission.

Next is Team Delta lead by Dan.

He keeps talking about being an 'Alpha' and... I CAN'T BELIEVE THIS IS HOW HEATH BRAXTON SPEAKS IRL, IT HURTS ME DEEP IN MY SOUL.

Dan leads his team straight to the ladder and into the cache room, where they quickly grab the box and leave... also without the very helpful light.

Ah well, that's simply not important right now, because back at camp, we learn its day eight and Sam has had only ONE SHOWER.

Look. I get that it's cold and unpleasant, but do you know what is also unpleasant? The eight-day-old stench of a large, sweaty man. 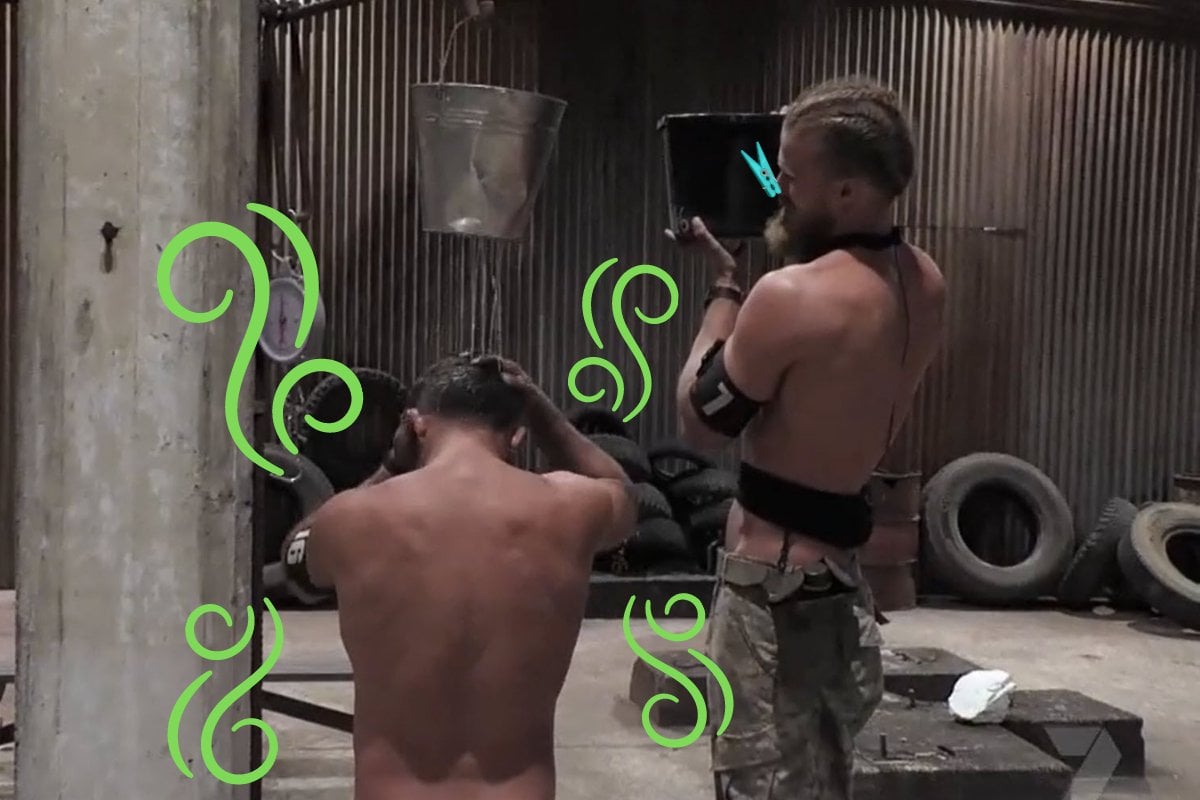 So he gets butt-naked and Jett, a goddamn hero, pours a bucket over his head.

John is complaining about running around the mountains all day "with a stank arse" and Koby and Dan have a wee spat over potatoes. ¯\_(ツ)_/¯

This show has really taken some turns today.

Meanwhile, the angry British men are debriefing on how Dan is a space cadet, so they bring him in for interrogation.

Angry James Bond asks him the name of his spaceship and uh???? SO SNARKY. I LOVE IT. 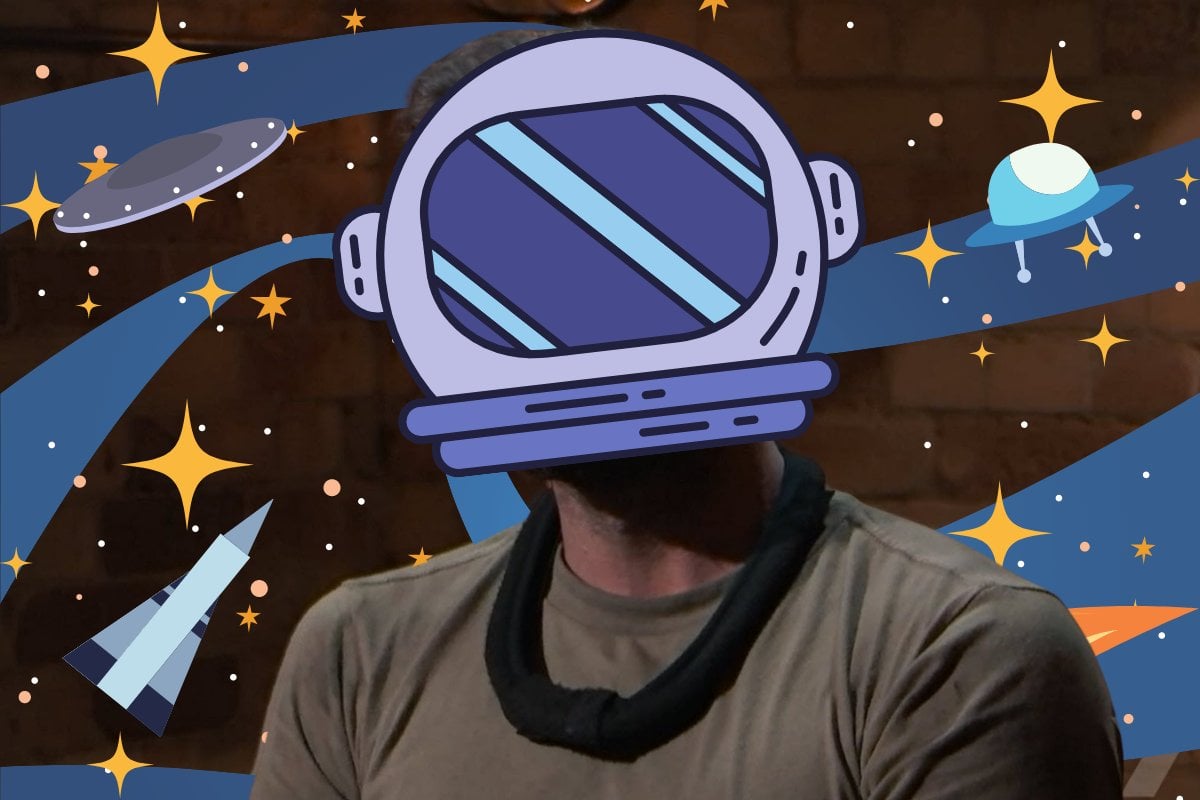 Dan begins with "well first of all, thank you for the feedback Staff" and holy sh*t.

I live for snark and right now I AM THRIVING.

They begin to talk about spirituality and 'energy' and how Dan's now obsessed with self-help books.

Angry James Bond tells him to "calm down", the universally recognised way to ensure someone does not, in fact, calm down.

He tells them about the anger he felt after his divorce, and subsequently not seeing his son who he learned was now calling his stepfather 'dad'.

He buried the pain of that and it came out in a disrespectful, verbally aggressive exchange with his son's stepdad.

"That exchange ended up in a complaint being filed with the police," he explains.

He gets heated talking about how he let his ego get the better of him, which leads to Angry James Bond telling him to "shut the f*** up".

Angry James Bond then says there clearly is some anger inside of him, which he is trying to suppress so much that he's not being true to himself.

The spaceship has landed.