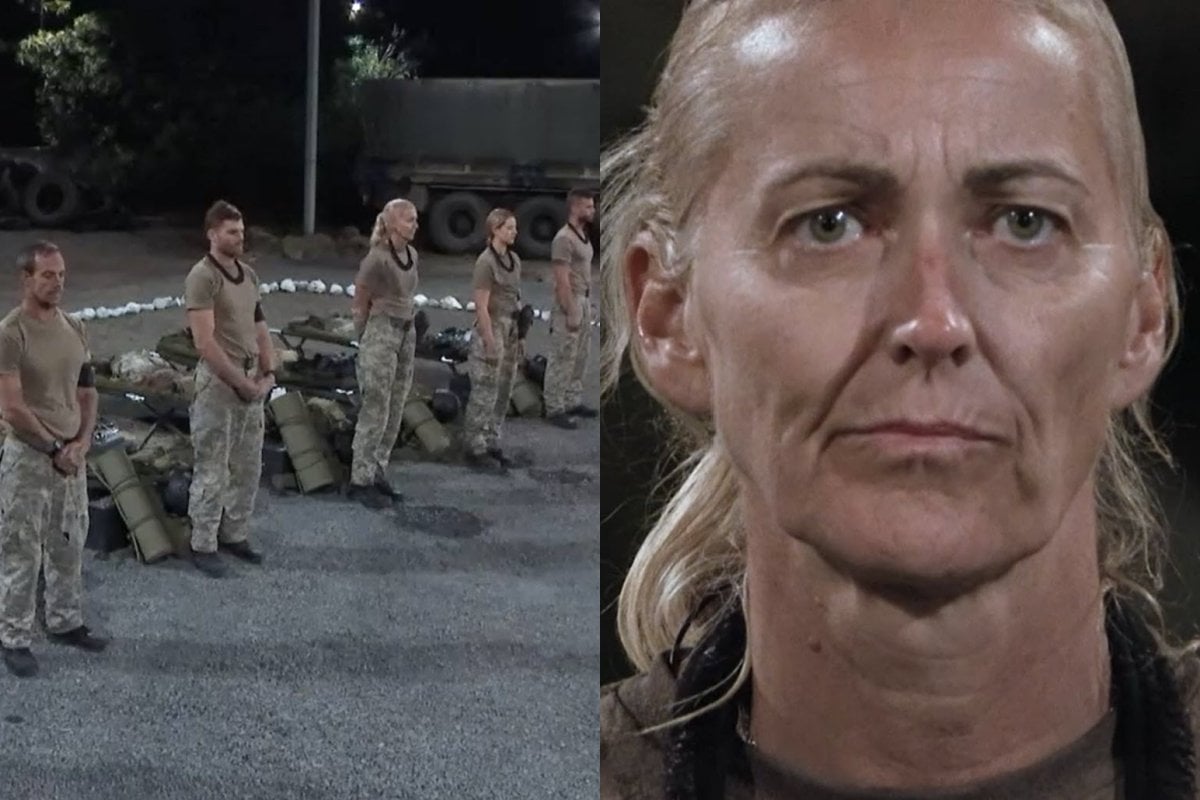 We open with John Steffensen "dropping one off" in the "bird's toilet".

He's barely got his pants down when Isabelle Cornish and Jessica Peris come out to pee too, and John reckons it is pretty weird to be sh*tting next to them. He is correct.

Soon after, Angry James Bond warns them it's going to be a "very, very hard day" and... what do you call the last few?

The celebs are called to the front one-by-one and made to call out the weakest member of the group, which they all identify as Kerri Pottharst.

I MEAN SOMEONE COULD'VE AT LEAST LIED JUST A LITTLE. 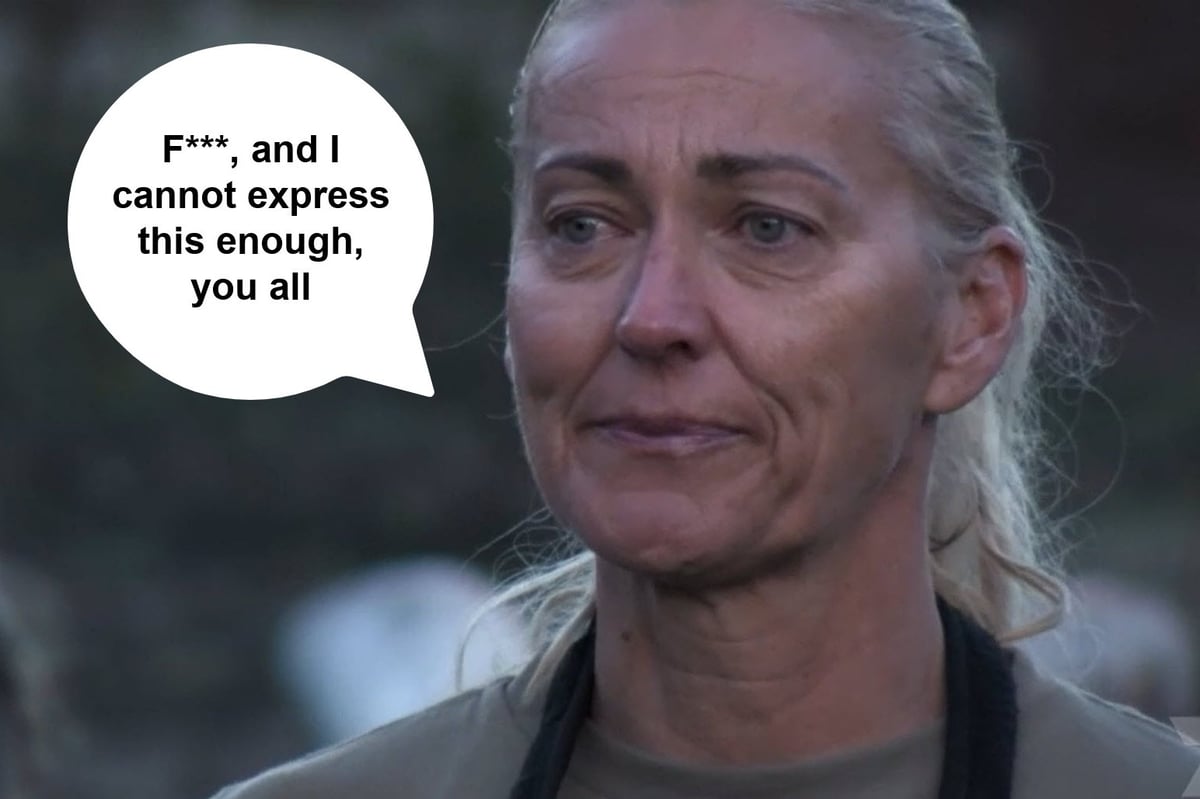 The SAS/Weakest Link crossover we did not need. Image: Channel 7.

Kerri herself says it's Bonnie Anderson, and they are named leaders of today's two groups: Alpha and Bravo.

The teams are required to paddle three kilometres down river and then carry the inflatable boat two kilometres up and down a mountain.

You know this show is cooked when I think to myself 'Meh, would rather do that than punch Dan Ewing in the face'.

The teams, and Mark Philippoussis' soggy sandwich, make their way downriver and then up the hill.

There's a lot of yelling and it's not from the leaders it is supposed to be coming from.

On team Alpha, Koby holds a coup and takes over. He barks orders and encouragement and the team manage to overtake Bravo.

Oh. But Bravo have also had an unofficial change in leadership too, with Sam Burgess taking the reins from an exhausted Bonnie. He helps them take back the lead, because Alpha had stopped for their soggy sandwiches and also for... a breather.

As Alpha run back down the hill, Kerri... falls into the boat. Everyone thinks it's a mistake but honestly?? What a boss move?? 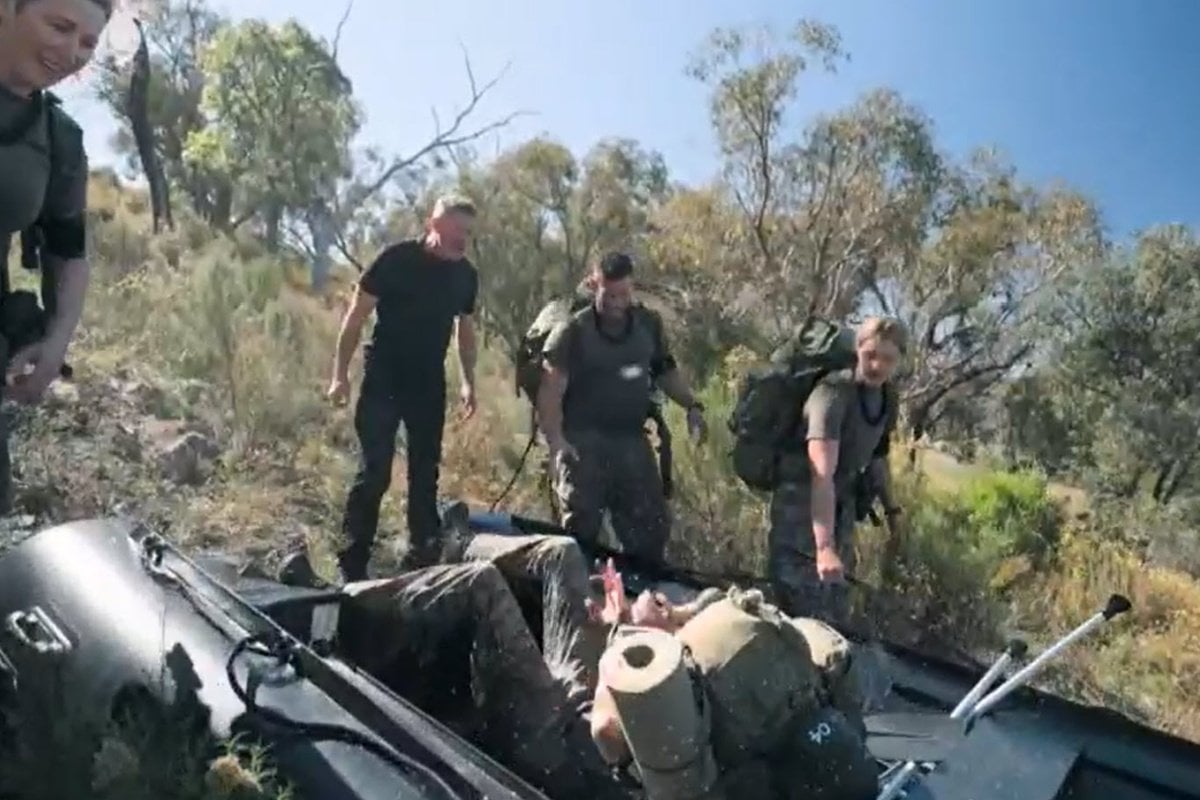 What use it being leader if you don't get to be carried in a boat by the rest of your team tbh?? Image: Channel 7.

She is pulled out but falls over again, and one of the angry British men is PARTICULARLY angry about it.

They finally make it back to the shore and then Angry James Bond throws an impromptu final leg at them... swimming with their backpacks to the other side of the river and then running back to the start.

Two of her teammates carry Kerri's backpack for her, which makes Angry James Bond furious.

Can I just say, I am pleased Angry James Bond is back after Monday night's... hugging and smiling. It is a relief. As this show's dedicated recapper, I am nothing without Angry James Bond.

But Angry James Bond has one last twist: the recruits must check if their back-up kit has stayed dry inside their pack.

A lot of it... has not, so he throws them into muddy puddles.

So... who won? Was it a draw? WAS THIS WAS THE WORST COMPETITION EVER?

On the way back to camp, Koby has some thoughts and feelings about Kerri's leadership.

I don't want to... point fingers... because I am not an angry British man, but all the conflict on this show so far has involved Koby. 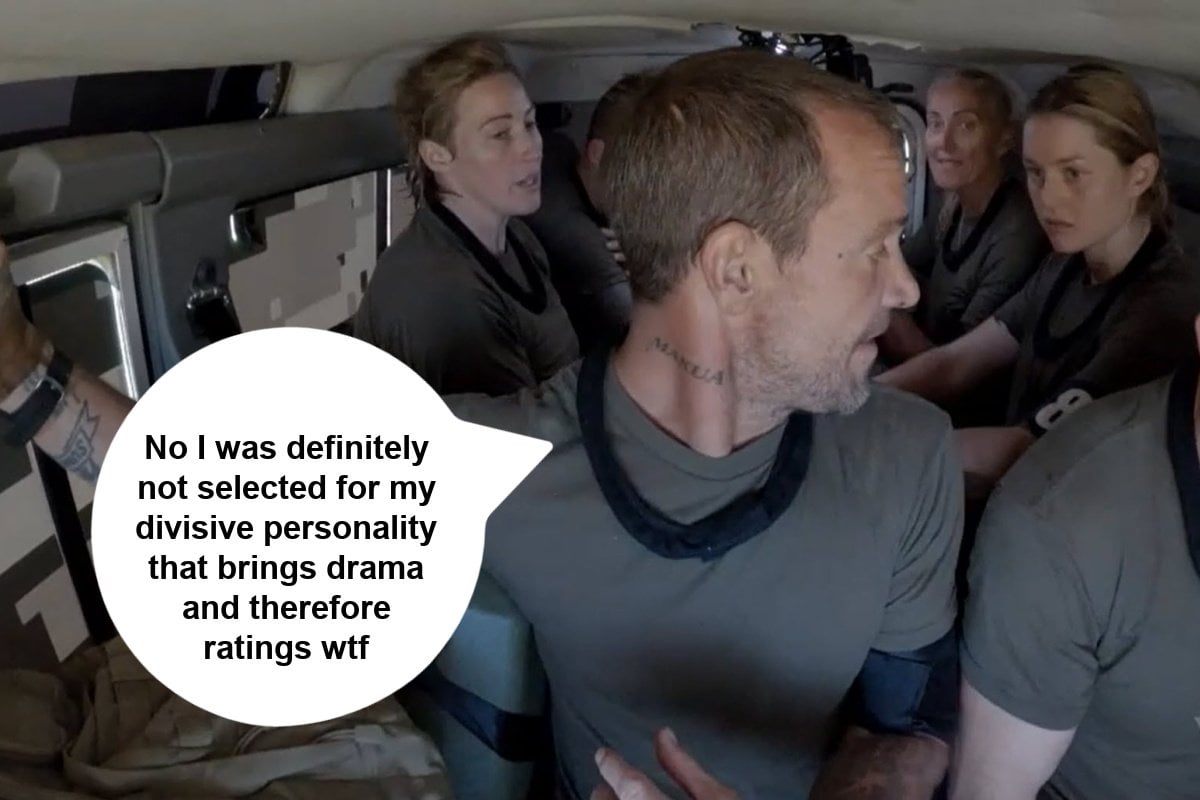 THIS IS ~REALITY TV~ HOW DARE YOU SUGGEST IT'S MANUFACTORED. Image: Channel 7.

The celebs hang their wet and muddy clothes, which are more wet and muddy than they needed to be because Angry James Bond wanted to act like a girlfriend in the middle of throwing her cheating partner out the house.

Bonnie tells Jessica she's "done", which is not ideal because she's about to be interrogated by angry British men who think she's a bit sh*t.

Bonnie says she's been doubting her abilities and struggling to stay on top of her emotions.

The staff say she needs to let go of the fear of failure and she was rejected from Neighbours three times, so that she can do. 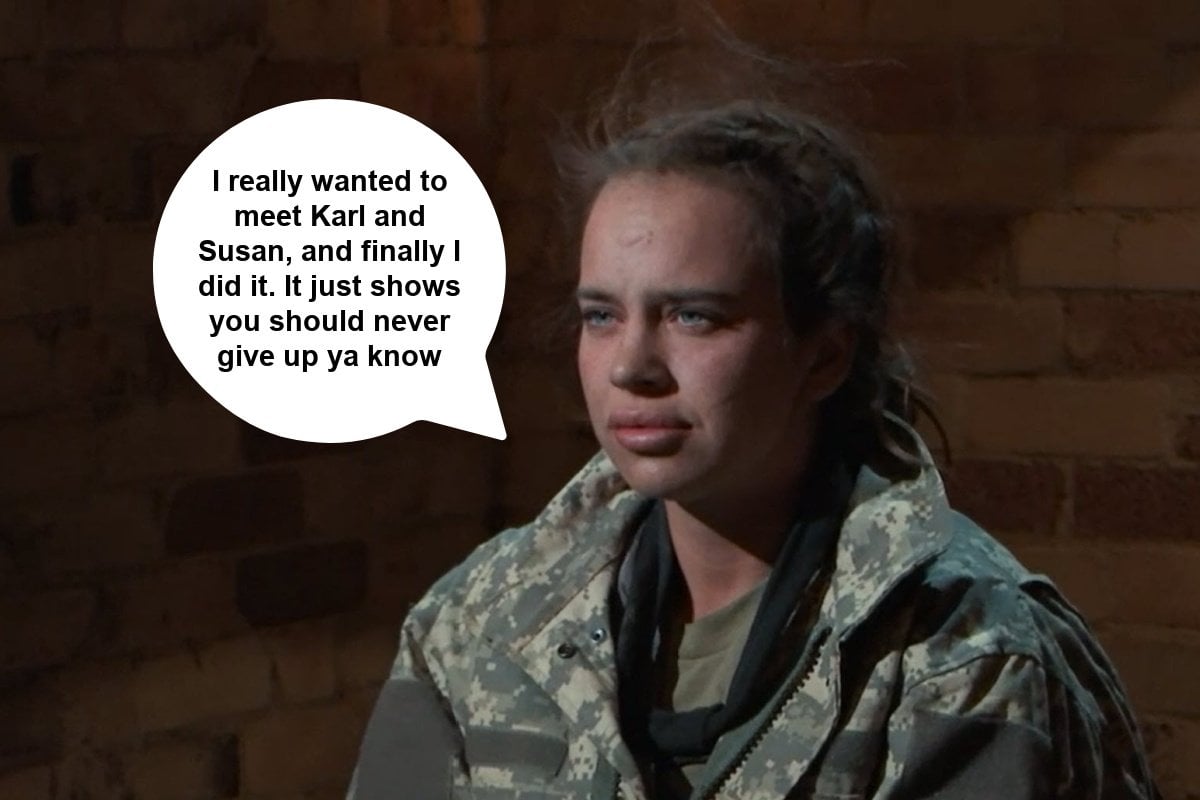 Everybody needs good neighbours, and finally, they were mine. Image: Channel 7.

Sam is then called in for another interrogation because he's... very good at this and the DS want to know why. ¯\_(ツ)_/¯

He explains his work ethic is thanks to his father, who passed away when Sam was 18 after living with Motor Neurone Disease.

He remembered how his dad came to watch him play on a freezing cold night, ended up in hospital and died a few weeks later.

"My dad was a pretty amazing man. He was pretty heroic. I spent every day with dad and over time... I would help him in and out of the bath, you just never think you'll have to do that," he says.

"It was a very pivotal time in my life."

After this, he joins Koby, John and Heath to laugh about the time Koby opened a bottle of champagne on a date and the cork whacked him in the eye. 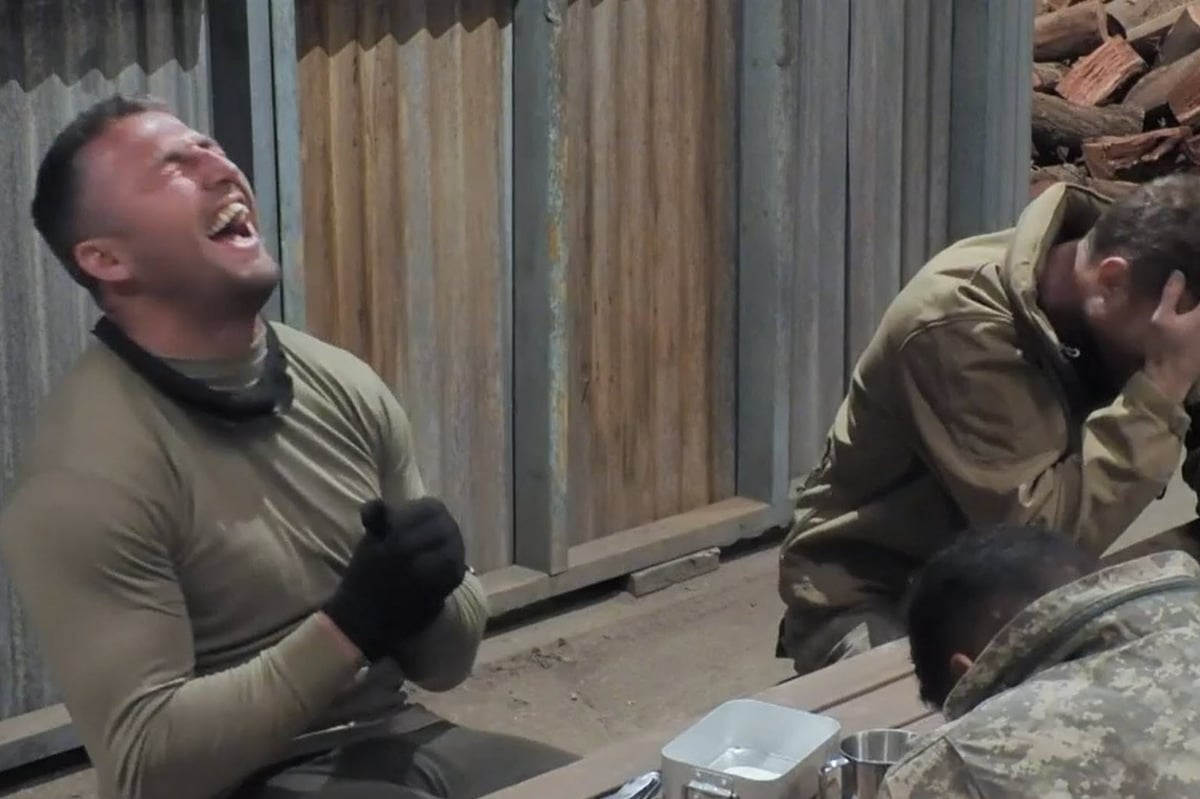 The most positive reaction to anything since Angry James Bond got excited about seeing two large, strong, overgrown men fight. Image: Channel 7.

Then it's time for kit check, because carrying out your very uncomfortable stretcher bed into the cold is exactly what you want to be doing at 10pm at night.

Alpha leader Kerri is very good at giving her team a plan to follow, but Bonnie is too stressed about her own kit to manage the team.

This means John, Jett and Sam keep moving each other's beds and saying things like "you're tripping bruv".

The group is tested by being made to grab specific items, which are supposed to be in the exact same spot for everyone. 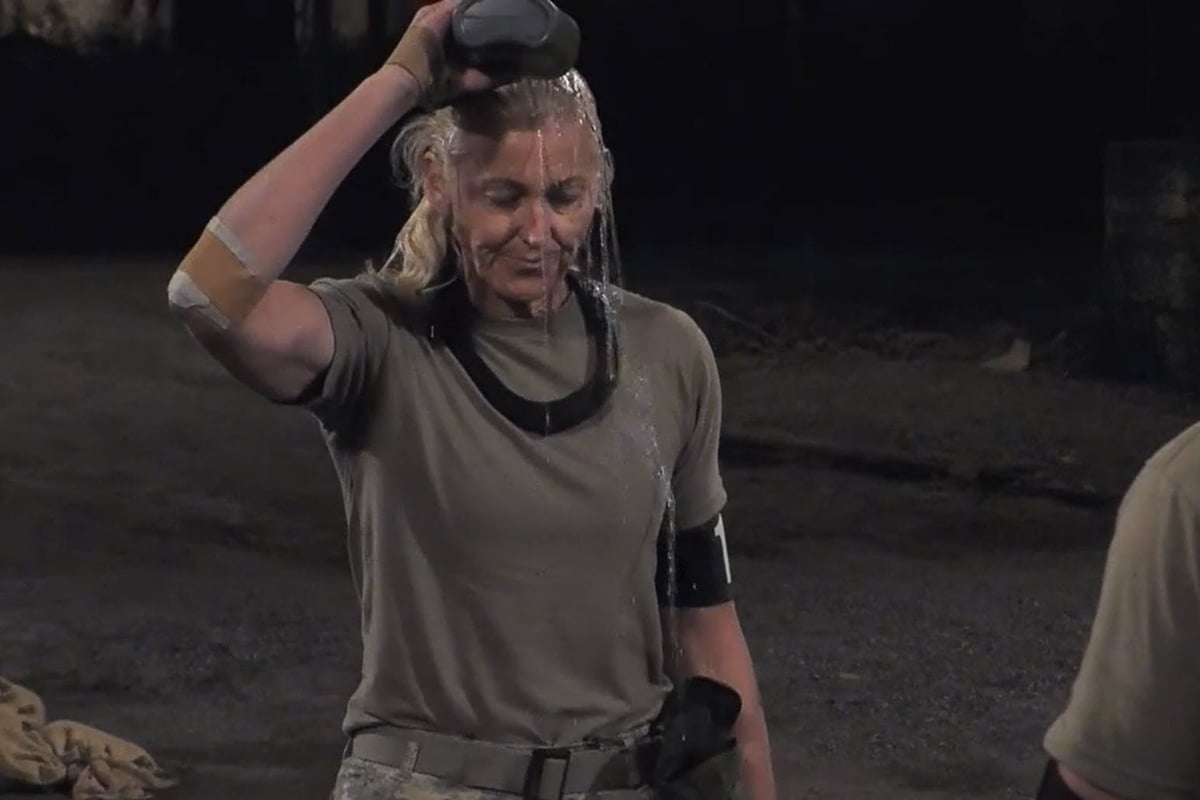 I thought Kerri et al. would've smashed it, but turns out both teams have presented their kits perfectly except for the fact that Kerri did not fill up her drink bottle.

Team Bravo win, and their prize is to take all their kit back to the room where they can 'sort their sh*t out.'

Okay, so this was the worst competition ever.

About 1am, Angry James Bond finally comes back to relieve them.

Inside, Kerri has a little cry to Jana about how as a strong woman, she's always had to be resilient for other people and now, the cracks are starting to show.

"Sometimes I just want someone to be strong for me," she says.

Kerri is then called in for interrogation, and uh, IT MUST BE AT LEAST 2AM BY NOW.

WHEN DOES THE SLEEP HAPPEN?

Angry James Bond asks how old Kerri is, and when she says 55, he says it shows.

UHHHH WOW OKAY SO NOW HE IS D*CKHEAD JAMES BOND.

Kerri says she wants to show people, especially women, that the idea of life being over - or 'all downhill' - from 50 is crap and that even if people think she's crazy, she's planning on sticking around on the show as long as she can.

Angry James Bond then turns into a psychologist, saying he's noticed some vulnerability under her strong exterior and asking if she is lonely.

D*ckhead James Bond then transforms into Tough-but-Fair James Bond, telling her she is psychologically strong and that for now, that is enough to keep going, but she is going to have to push herself even more.

"And I know I'm going to feel that on selection. At night, the lights so out and my bodies aching and I have to get up the next day and do it again. That's where I will probably shed a tear."

I would definitely cry too, but I don't know if I would then wake up the next day ready to remain stoic as the spit from angry British men flies at my face once again.

And with that, she zips herself up into her sleeping bag like it's a goddamn cocoon and she's going to awake an extremely shredded, strong butterfly.

And for that, Kerri, we have no choice but to stan.