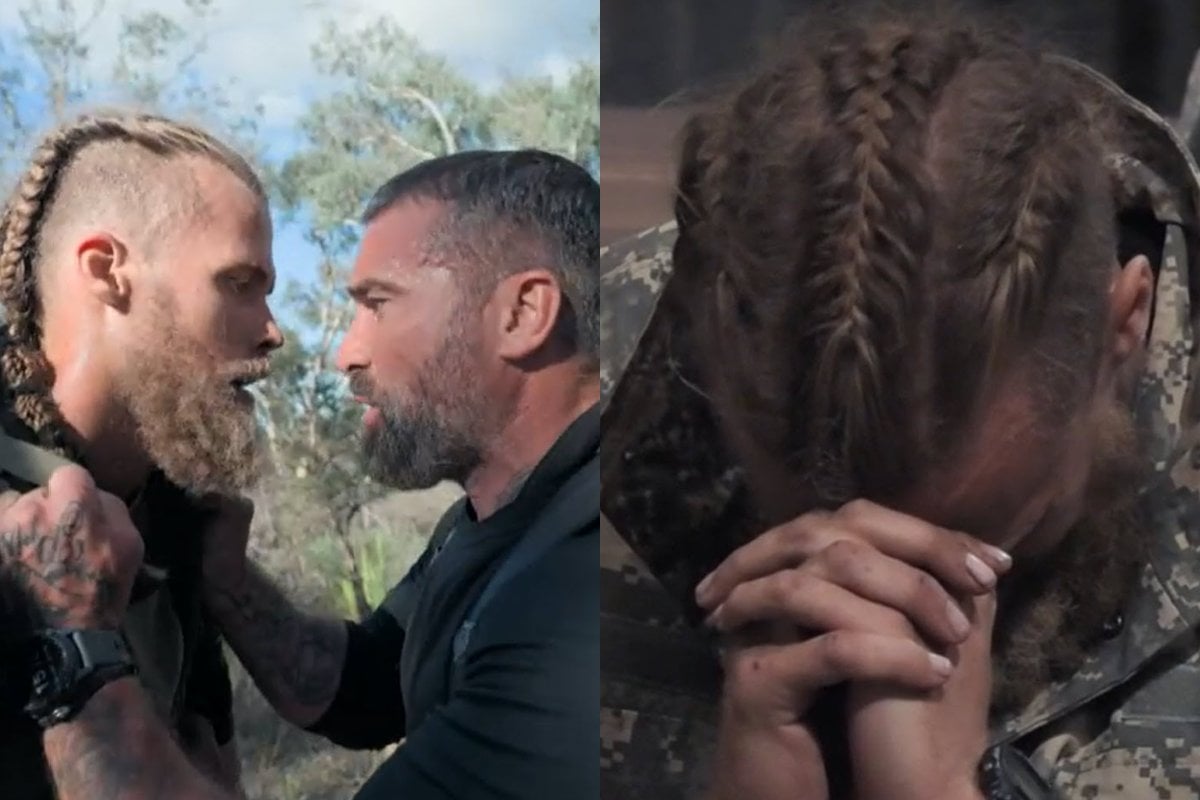 I like how every single night, the gruff voiceover man says the celebs will face their toughest test so far, as if that first ep tear gassing was a walk in the park.

It's breakfast time, and everyone is cranky.

There's a lot of bickering over GROSS, STODGY PORRIDGE and come on guys, THINK ABOUT YOUR LIFE CHOICES RIGHT NOW.

Sam and John say grace and... I think it's wholesome. This show is getting to my head.

ANYWAY. LET'S GET TO THE PHYSICAL PAIN NOW PLEASE.

He crosses his arms and falls backwards, landing head first in the water. The technique is good, but he'll lose points for the large splash.

I also just really need to show you all this screenshot I took of him... mid-air. 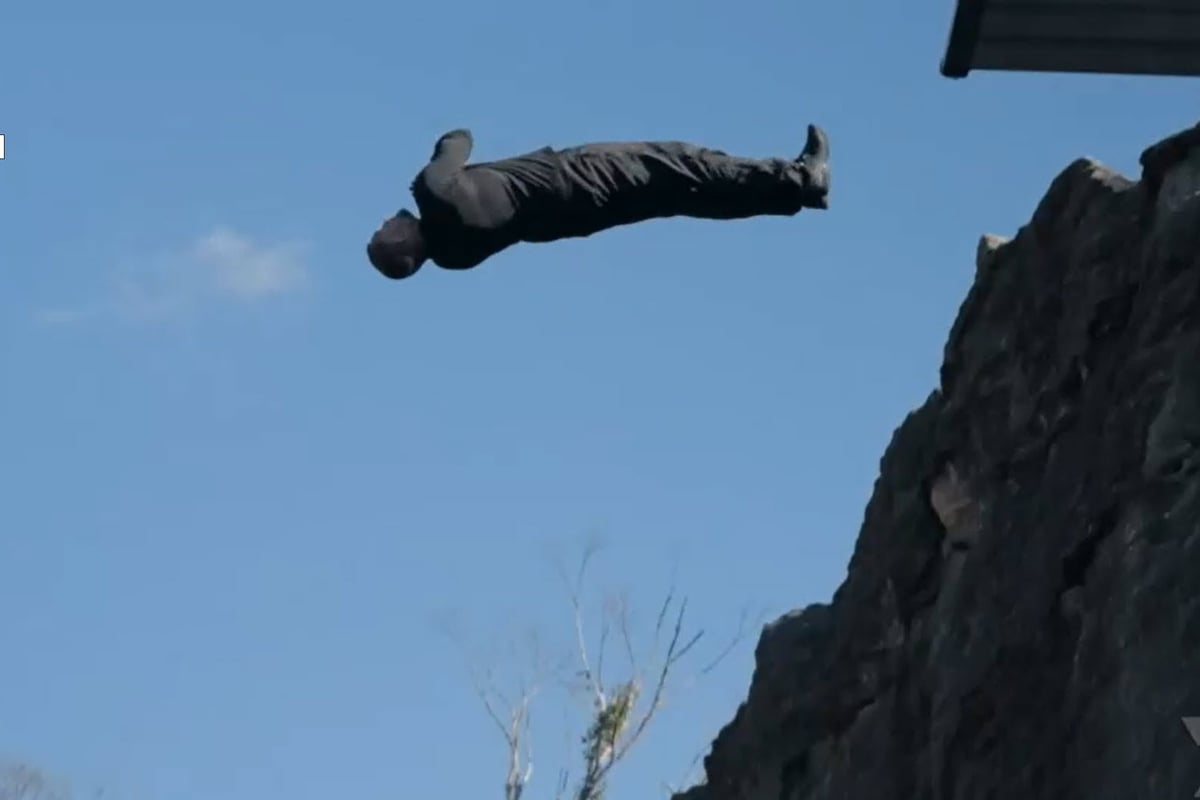 Koby is the first to have his confidence tested, and if there's anyone who doesn't need to prove themselves to be confident... it is this man.

Remember when he bragged that he could beat everyone, including AN ACTUAL IRONMAN, in a push-up contest???

Okay, turns out he's actually nervous about this one.

He lands flat on his face. 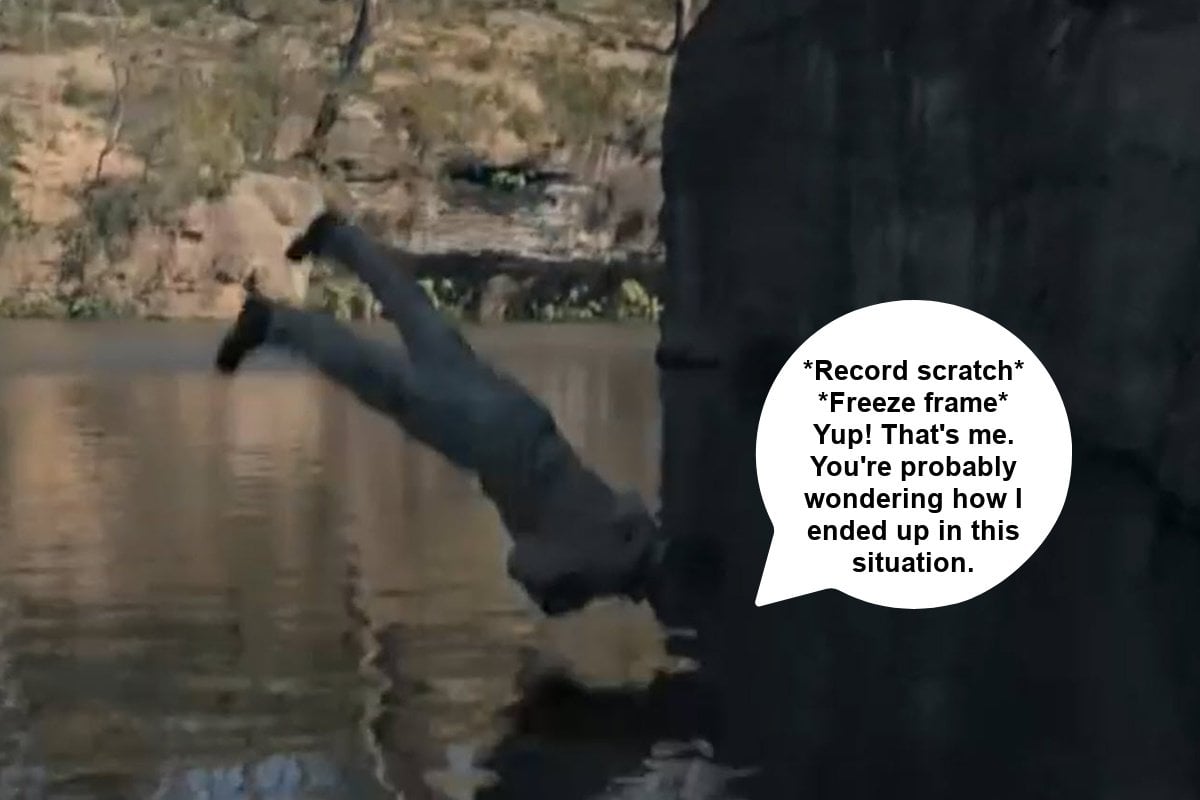 How I see Koby's next documentary going. Image: Channel 7.

Jett passes fairly easily, Dan fails because he fell "like a total bag of s**t" (lol), and Jana nails it. Everyone else falls in various degrees of success, except Jessica who also lands on her face.

Am I feeling particularly squeamish today or is this the worst challenge to watch so far??? The sound of their faces hitting the water is making me feel SO ILL.

Last up is Isabelle, who breaks position has soon as she's off the platform and lands on her butt.

It is, as the angry British men say, "absolute s**te".

She looks like a baby bird who jumped out of the nest too soon. 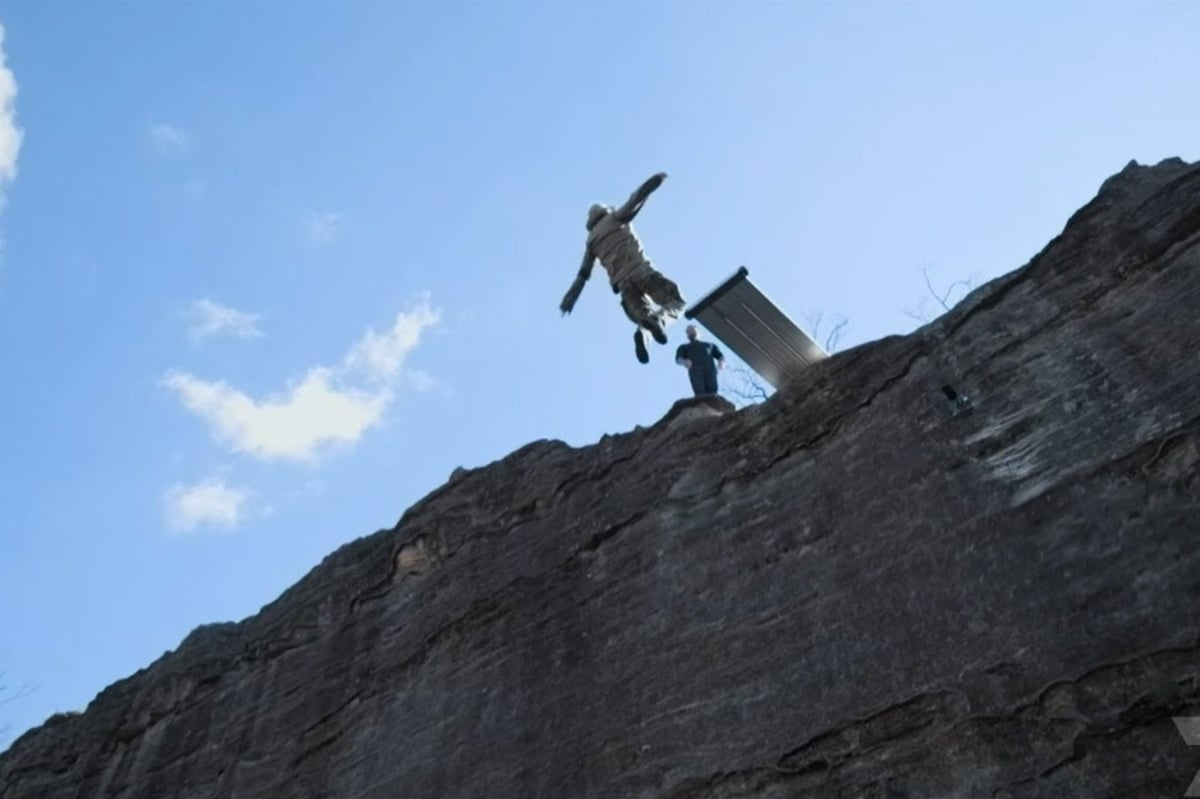 Back at camp, Koby and Sam Burgess are bonding over their mutual pal, Rusty. As in... Russell... CROWE.

This is my favourite of Koby's stories so far, narrowly overtaking that time he accidentally opened a champagne cork into his own eye.

Nearby, Isabelle is lying on her bed looking sad (same), until she's called in for an interrogation.

The angry British men have been doing some Googling and they have some questions about her recent ADHD diagnosis.

Isabelle says she always struggled with feeling different and like she doesn't fit in. The diagnosis brought her some relief and understanding, but she also feels baggage attached to it. 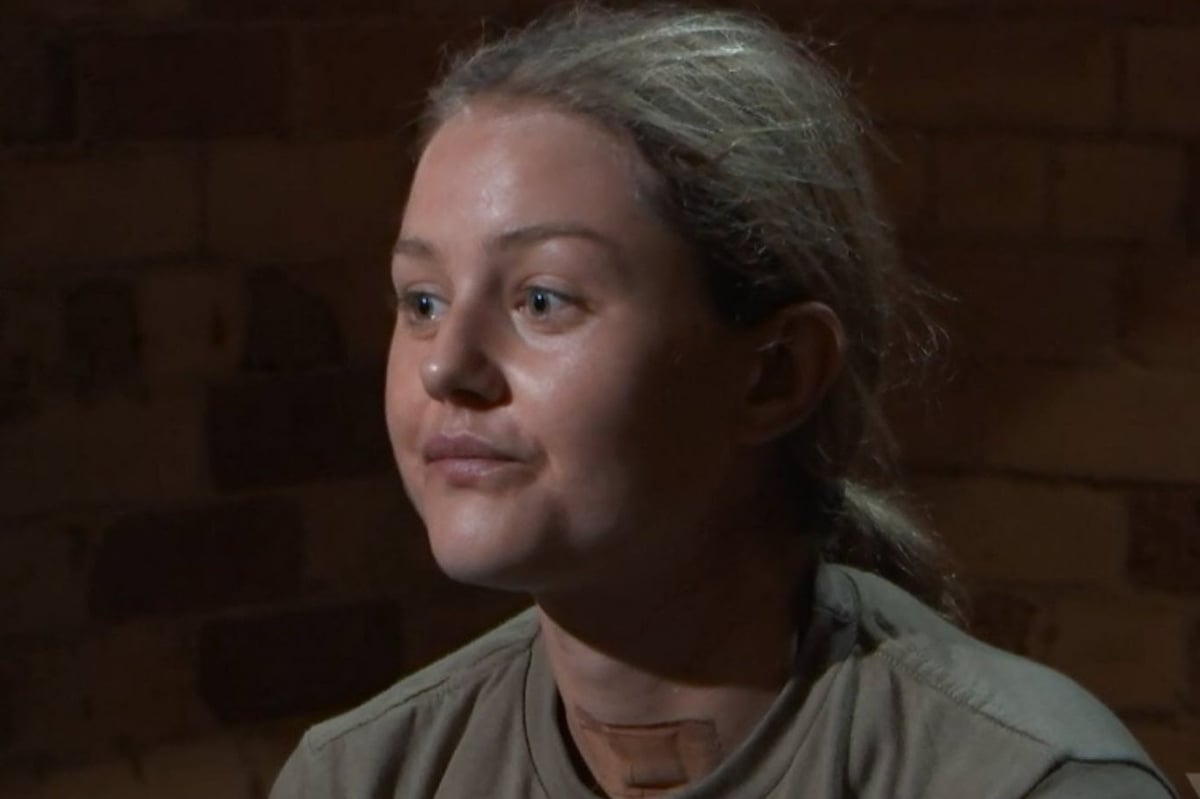 HE SAYS HE LIKES HER AND IS ROOTING FOR HER TO GET TO THE END.

That night, everyone gathers around for a truth circle, or something.

It's time to confess their most shameful secrets.

Mark is first, and he recalls the tough financial situation he and his family found themselves in when his sports career ended because of injury.

"I was in a dark place and depression," he says. "There's no greater pain in my heart than watching my loved ones suffer because of my actions."

Jessica tells everyone about her suicide attempt, and Dan talks about focusing too heavily on his work and not being present enough at the beginning of his son's life.

John says he's very insecure about being a man of colour and an immigrant in Australia. 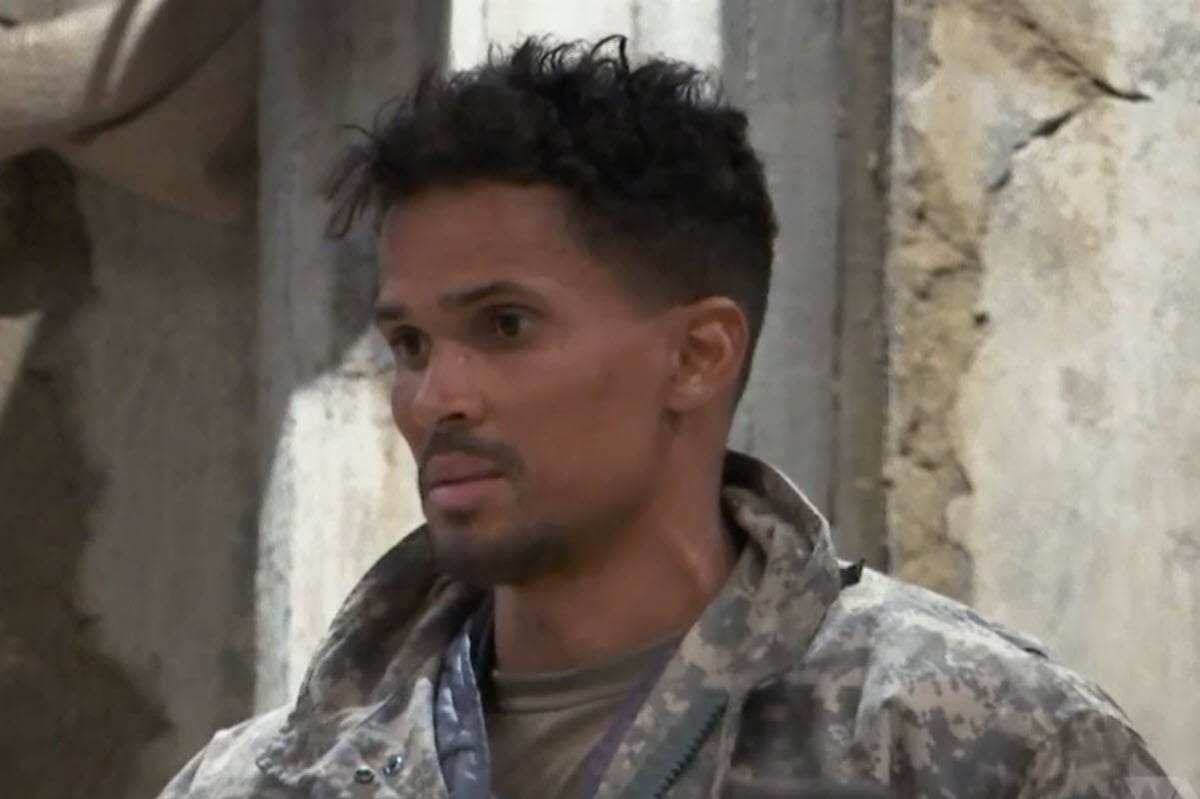 "I carry a huge chip on my shoulder," he says. "Of constantly proving myself and my self worth. It's just what we inherited being South Africans being a part of Apartheid. I inherited it from my father and I walk around with it every day, and it's killing me.

"Every day I try to overcompensate and put out my love and friendship because I don't want to be that 'angry Black man' anymore."

This is the best part of this show so far.

Yeah, it's entertaining to watch celebrities be put through the ringer physically, but this is the most insightful and impactful moment.

Sam reflects on his drinking and drug problems and how they impacted his family.

"That's the biggest pain in my life at the moment. I let my addiction personality take the wrong road."

Heath says the 'collateral damage' of his professional footy career fell on his family, and Isabelle says her friends and family suffered due to her mental health challenges. 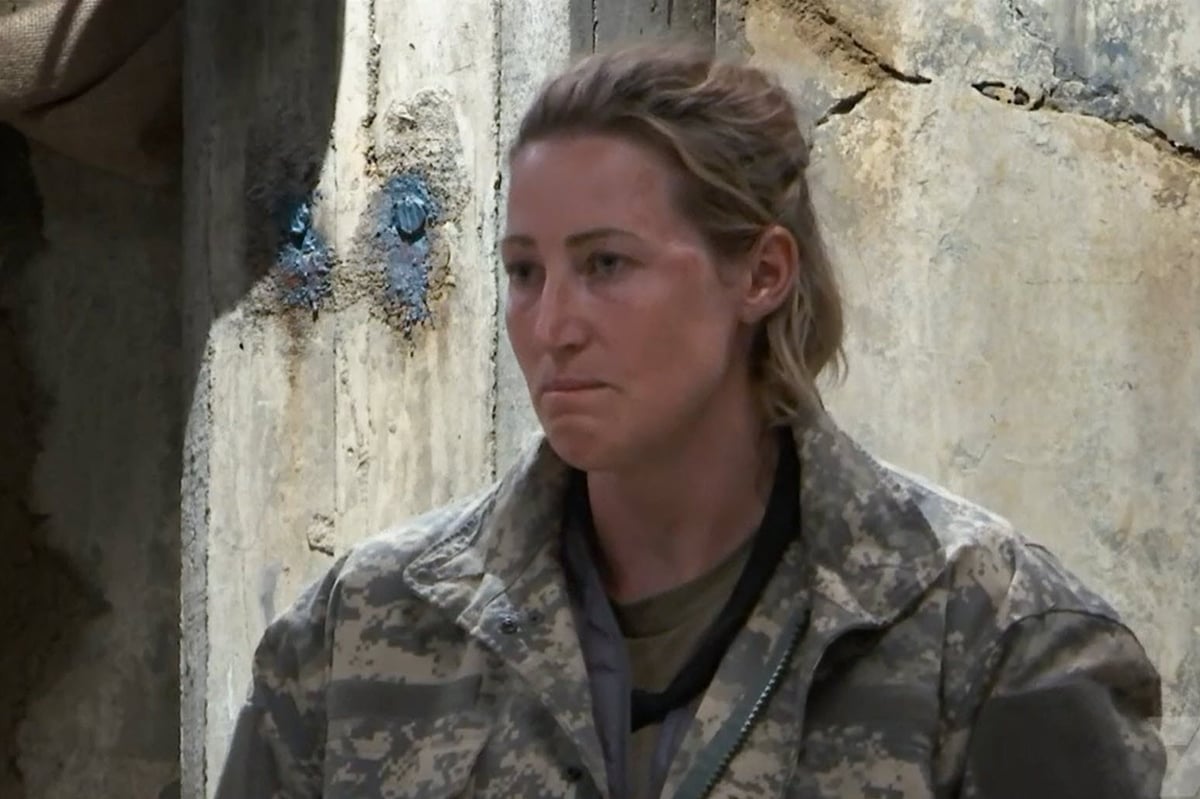 I have no snark tonight, JUST EMOTIONS. Image: Channel 7.

Jana says her most shameful moment was in her last year of medical school, when she could've found herself and her three children homeless if it wasn't for financial help from her elderly parents.

Last to share is Jett, who says he struggles under the weight of his own expectations. He thinks it's a symptom of his sister Jaimi's mental health struggles.

"She battled with mental health for 10-15 years, but for me it was just like 'why are you doing this to yourself?' I never fully understood it," he says.

He said she'd once asked him a question, to which to replied with what he intended to be a 'reality check'.

"There was one thing I said at her funeral. I'm not going to say it because it was very personal, but I remember saying it to her the night that she asked me this question.

"I gave her the honest truth and I was hoping that was the harsh reality that she needed, hearing it from her younger brother, but she's gone now. I kind of regret not being there for her more." 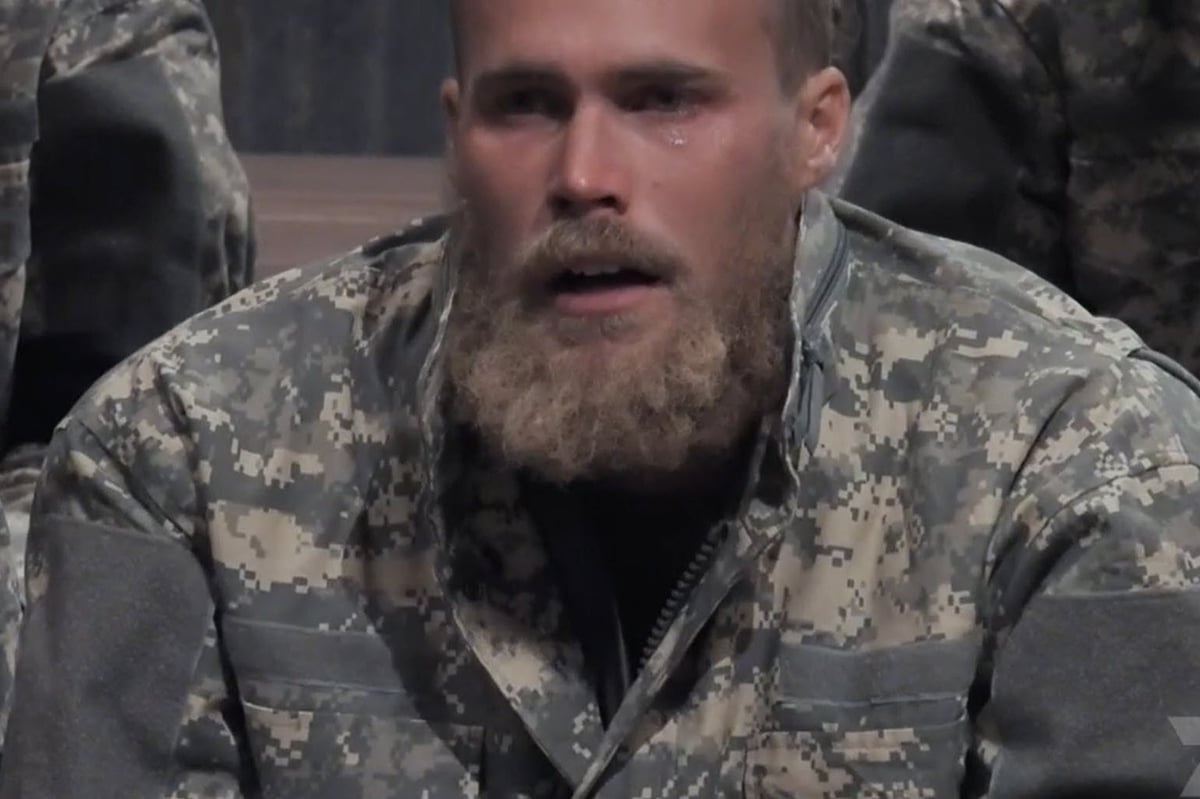 In his confessional to camera, he links this to his struggles when he doesn't achieve.

"Everyone wants to do the best that they can for the people that they love, but when you can't it makes you question yourself. 'Was I a good enough brother?'"

I need a tissue.

Unsurprisingly, because... of the show we are currently watching, the ~emotions~ don't last much longer. It's been like half an hour without any physical pain, you see, and that's simply too long.

The recruits now have to perform - you guessed it! - one of the most arduous SAS tasks ever.

I didn't see that coming!!!

It's a team challenge, where two teams must lug 50kg tyres along a 6km bush track, WITH their big arse backpacks too.

It's brutal and punishing and painful etc. etc. etc.

The red team falls behind, so Sam just decides to... carry one of the tyres himself to speed things up. Having that much physical strength is just... HOW??? IN WHAT WORLD???

They're almost neck and neck now, and Koby is required to clear a branch from the path for this team. He does so and then... puts it back in place, causing Sam to trip over.

The blue team have to stop to clear the path again, and the red team slip on past them.

One of the angry British men is bloody foaming at the mouth with excitement. 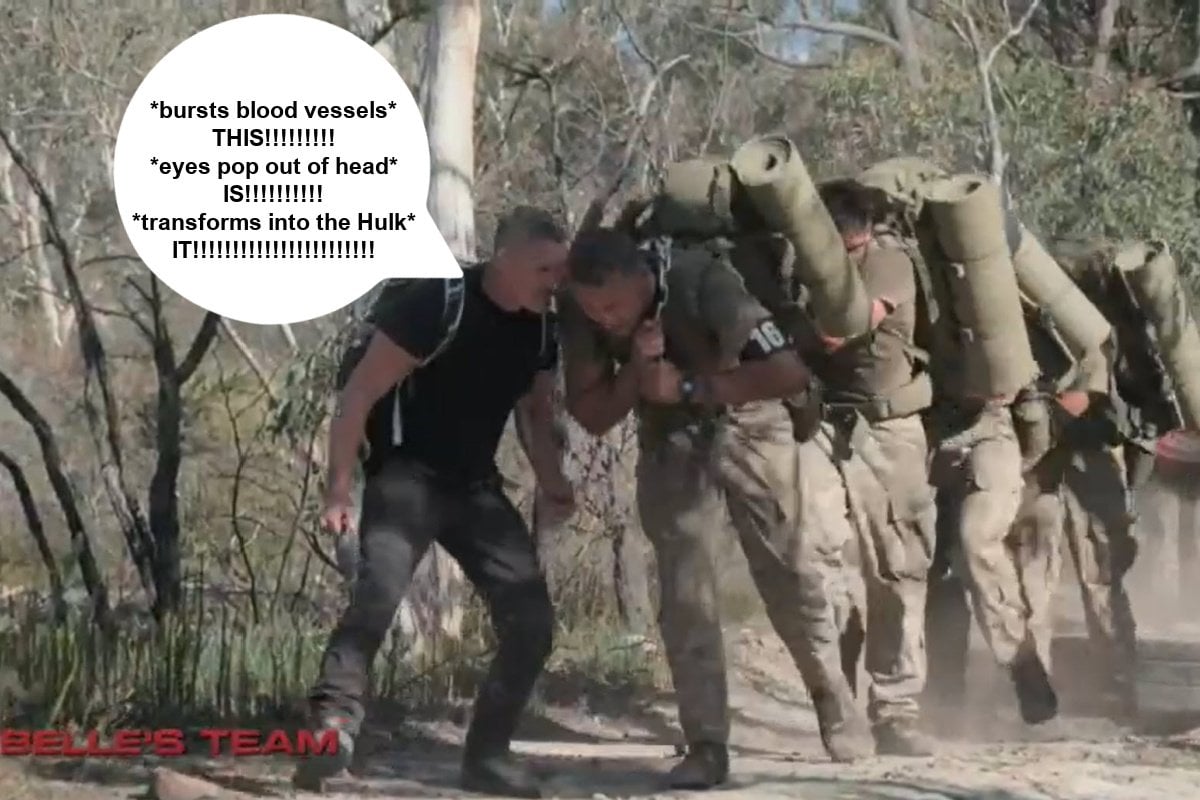 SAME. THIS IS THRILLING STUFF.

With a kilometre to go, Koby gives up the leadership and Jett takes over, but the team starts to unravel into bickering.

The red team take out a well-deserved victory, and the blue team must... run back the 6km they came.

Jett is physically and emotionally ruined, and Angry James Bond is REALLY angry about it.

Jett takes off his armband and attempts to withdraw, but Angry James Bond is like NAH BRO. So Jett... reattaches his arm band and takes off.

PROUD OF YOU, MAN I HAVE NEVER MET.

Back at camp, Jett's sneaky complaining about Koby is interrupted by... an interrogation. I'm starting to find the predictable format of this series comforting, and that's worrying to me.

Jett talks about his parents with a smile on his face and oh my god, it's so bloody sweet. 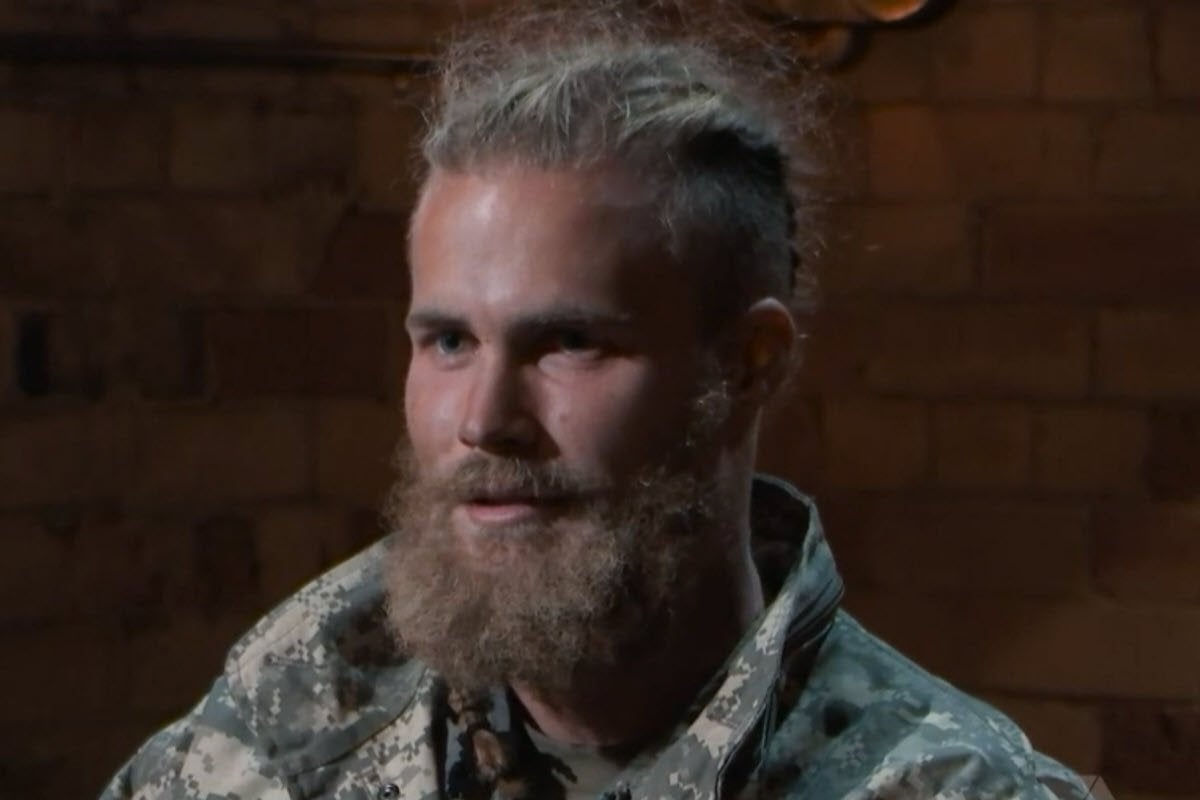 He says he is upset by seeing them upset.

"I remember, with my sister passing in September, we were all there sitting around the hospital bed with her, saying our last goodbyes and I just remember seeing them sitting there holding her hand, just being like 'what more could we have done?'

"Mum said it perfectly - 'she was fighting a demon in her head' - but unfortunately the demons got her in the end. She beat some away but then more would come back. It was good in a way because it was almost like her suffering was over."

Jett recalls how Jaimi hung on for hours after he last saw her, and says she was a fighter "until the very end".

Angry James Bond says those words should be Jett's biggest motivator, and he says that's what he thought about when he was pulling those tyres.

Back at camp, Mark gives Jett a little pep talk and bless. this. man.

SAS has gone full wholesome vibes, and I'm here for it.

Reply
Upvote
1 upvotes
I dunno. Getting people to publicly discuss their most traumatic personal moments for the entertainment of others feels a little ghoulish to me. Hope they've got some decent after-care.
Z
zaky 8 months ago

Reply
Upvote
@rush I agree that it felt ghoulish.  I can also see the usefulness of this type of session in team bonding and knowing each other's weaknesses which is why it is part of the training, normally it is not broadcast to a whole country but that's the deal they entered.  The whole process has changed my perceptions of the contestants, yes the narrative is edited but I think the producers have tried to show the complex personalities and vulnerabilities of each recruit.
News
General
Opinion
True Crime
Politics
Sport
Explainer
Entertainment
Celebrity
Reality TV
Movies
TV
Books
Rogue
Royal
Lifestyle
Beauty
Fashion
Weddings
Home
Wellness
Health
Fitness
Travel
Food
Parents
Before The Bump
Pregnancy
Baby
Kids
Teens
School
Parent Opinion
Work & Money
Money
Finance
Career
Lady Startup
Relationships
Sex
Dating
Separation
Friendship
Family
Real Life
Couples