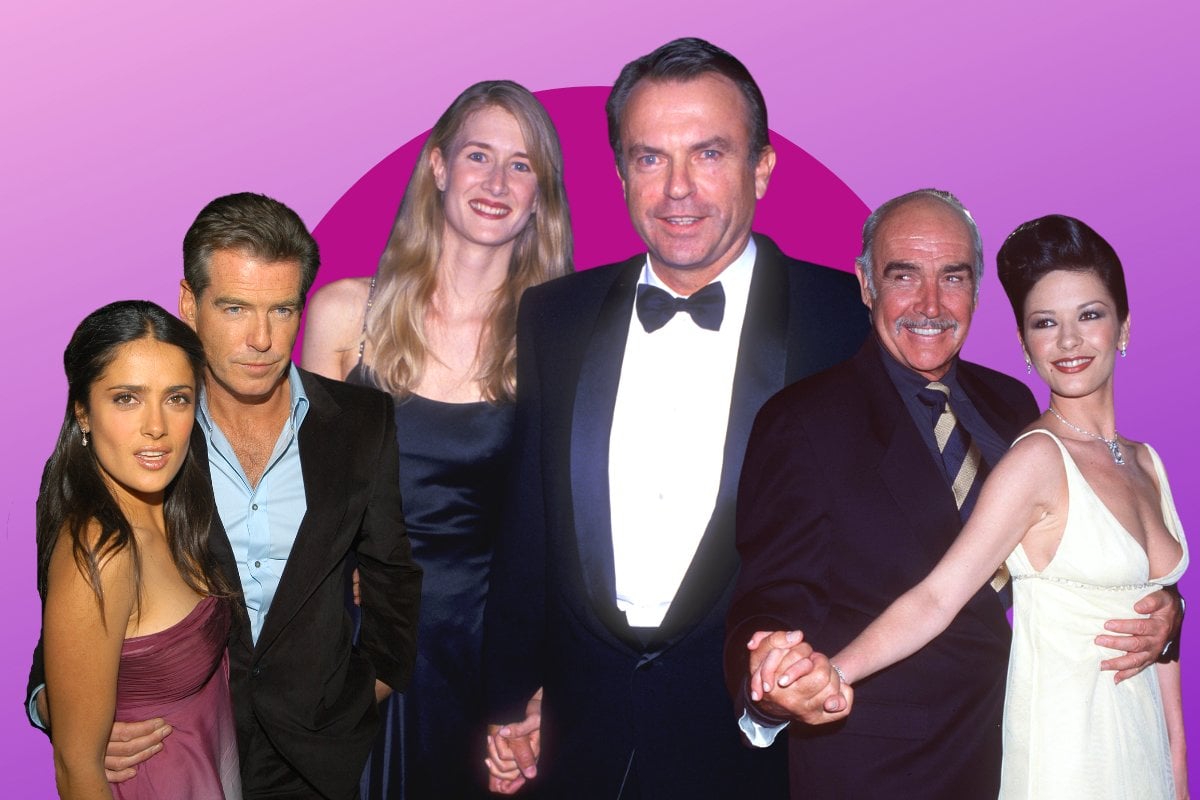 Recently, the internet began foaming at the mouth about a 30-year-old film.

The 'foaming at the mouth thing' is not unusual for social media. Neither is the re-examining of a classic.

This time, its sights were set on Jurassic Park, the beloved dinosaur blockbuster with a huge pop culture cachet and a much loved cast, including Jeff Goldblum, Sam Neill and Laura Dern.

The internet's issue? Well, it had flown under the radar for years that on-screen love interests botanist Dr. Ellie Sattler (Dern) and paleontologist Dr. Alan Grant (Neill) had a 19-year age gap in real life.

It raised no eyebrows - not even their own - until recently.

"I am 20 years older than Laura! Which at the time was a completely appropriate age difference for a leading man and lady," Neill, 74, told The Sunday Times in a May 2022 interview. Dern is now 55.

"It never occurred to me until I opened a magazine and there was an article called 'Old geezers and gals.' People like Harrison Ford and Sean Connery acting with much younger people. And there I was, on the list. I thought, 'Come on. It can't be true'." 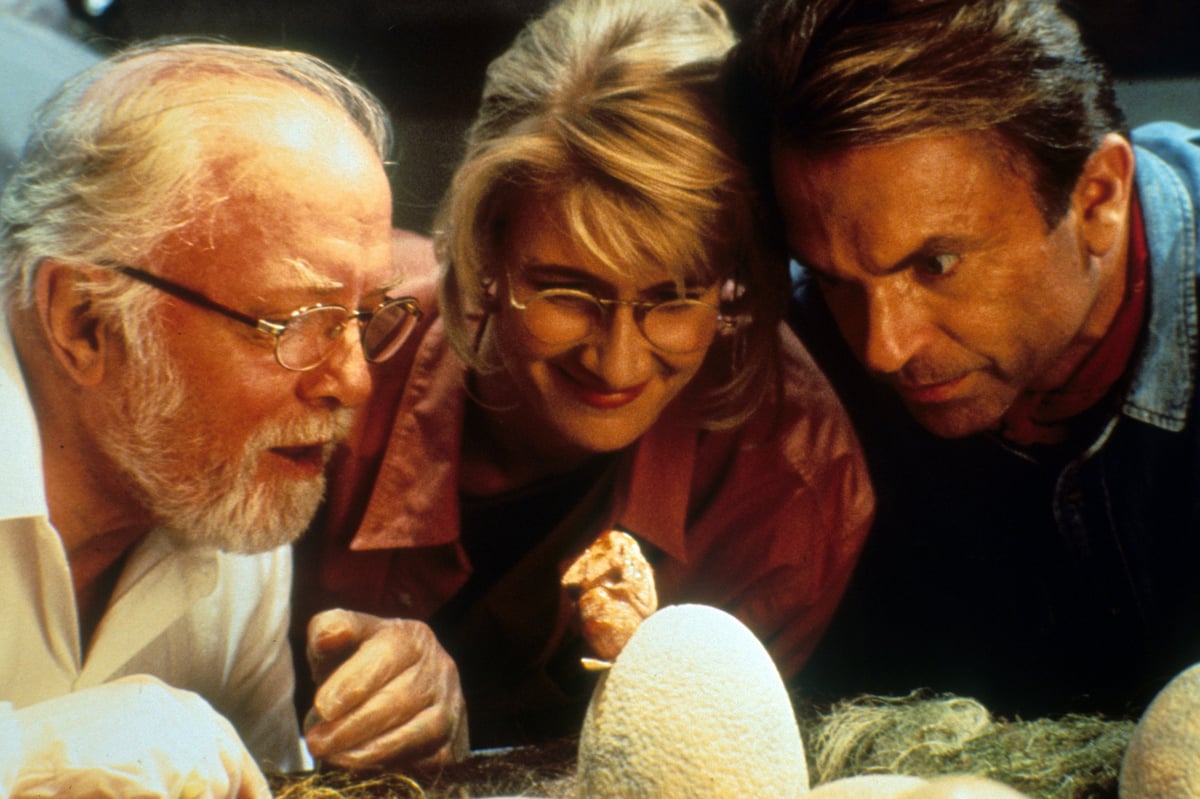 Ford starred opposite Anne Heche in Six Days, Seven Nights in 1998. He was 55, and she was 29. Connery was 39 years older that Catherine Zeta Jones in 1999's Entrapment, and 27 years older than Michelle Pfeiffer in 1990's The Russia House.

Responding to Neill's comments, Dern said she too at the time thought it was "completely appropriate to fall in love with Sam Neill".

"And it was only now, when we returned in a moment of cultural awareness about the patriarchy, that I was, like: 'Wow! We're not the same age?'" she continued.

Hollywood's heterosexual on-screen age-gap romances are cliche, at this point. It's certainly not groundbreaking to point them out.

It feels like every few weeks, a new movie is under the microscope. Retrospective outrage has targeted everything from Jurassic Park to Star Wars to pretty much every Bond film. I even stumbled upon an article titled Woody Allen's films ranked by age disparity.

Then there's the same issue, just the other way around.

Early in 2022, Emmy Rossum was cast to play the mother of Tom Holland in the upcoming series The Crowded Room. Rossum is precisely nine years, eight-and-a-half months older than Holland, which, as one Twitter user joked, is "fuzzy math".

We've seen this before. Sally Field played Tom Hanks' mother in Forrest Gump with only a 10-year age-gap. In Aquaman, Nicole Kidman is Jason Momoa's mother, despite just a 12-year difference. 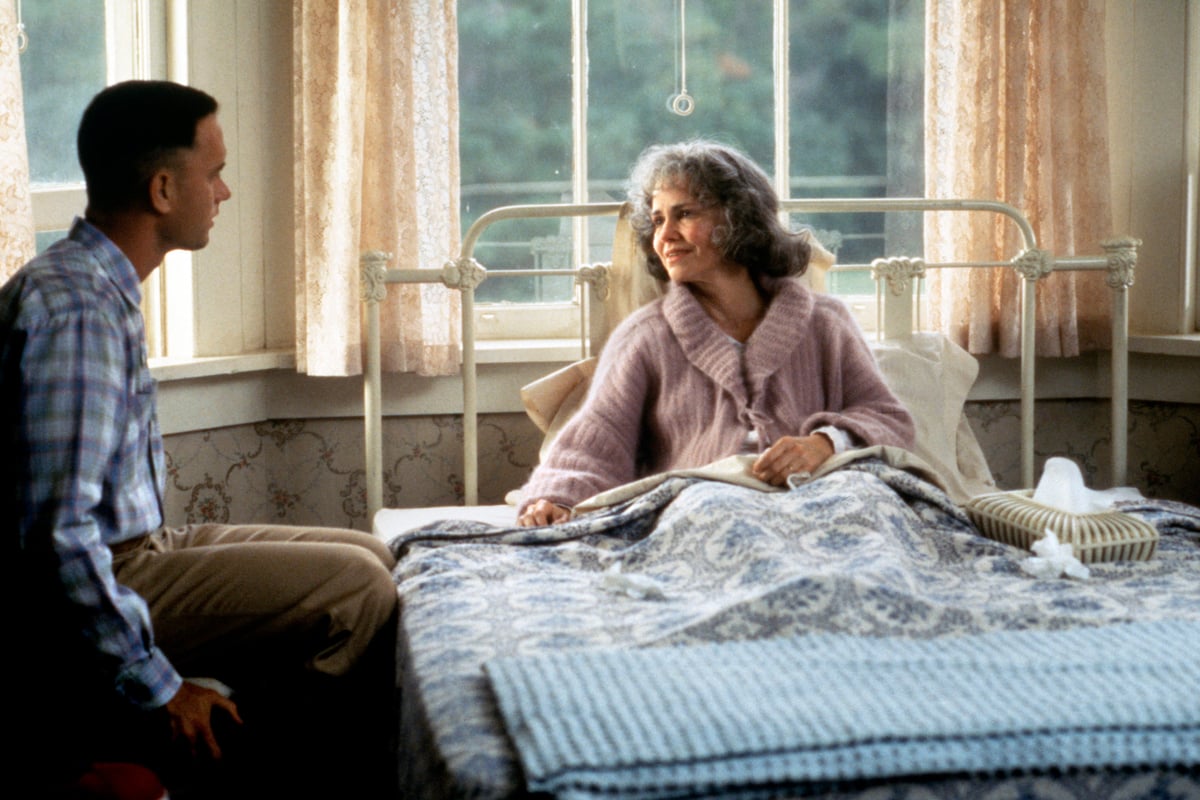 On paper, these are ridiculous and unbelievable. But yes, these are just faux-relationships between adults who sign on to play them.

It's really not Catherine Zeta Jones' fault that she was chosen to play the love interest of a man almost four decades her senior, and all of these on-screen relationships feature two consenting adults.

What these do represent, though, is an underlying trope not just in film, but in real life too.

That a woman should be forever in her 20s if she wants to be desirable.

It's the same culture that proclaims Anne Hathaway is 'ageing backwards' at age 39, as if 'looking her age', whatever that means, would be the worst thing in the world. Meanwhile, 49-year-old Idris Elba is only 'getting hotter with age'.

In film, the issue is in the casting, rather than with the cast themselves.

The regular 'ageing up' of young women, or 'ageing down' of older men, both wedge out the need to hire women of a certain age, caused in no small part by decades of casting and production choices being made solely by one demographic: older white men.

This is why there's a longstanding joke about a women's 'last f***able day' in Hollywood, coined on Amy Schumer's skit show. It refers to the moment she hits an age where Hollywood no longer considers her sexy. It's the beginning of a career dry spell, until maybe she'll come out the other end and be able to play a wise matriarch. Or a witch.

At 37, Maggie Gyllenhaal shared she was turned down for a role because she was "too old" to play the love interest of a 55-year-old man.

Women are finding more and more ways to tell their stories. Gyllenhaal was Oscar-nominated for her writing and directorial debut, The Lost Daughter, staring 48-year-old Olivia Colman. Reese Witherspoon's production company, Hello Sunshine, is focused on women's stories too. Among others delving into production are Issa Rae, Ellen Pompeo and Kerry Washington.

If the old guard won't change, you have to change the guard itself.

Plus, interrogation and criticism of age-gaps has never been more in vogue. It's a constant bug bare of younger consumers in online discussions.

What Dern's Jurassic Park comments allude to is the shifting of this culture over the past few decades. What once barely batted an eyelid can lead to an entire week-long outrage online, calling out the sexist and ageist nature of many casting decisions. 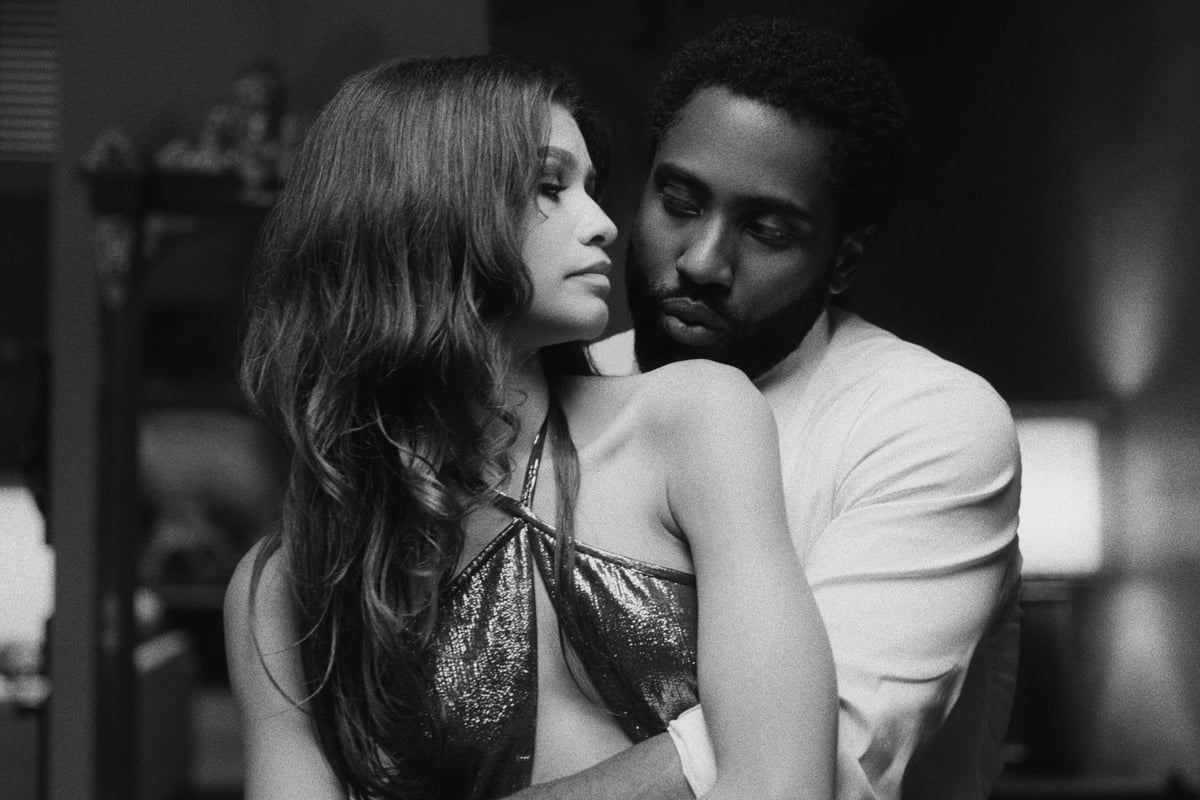 On a sliding scale, and considering the Connery films of decades past, this feels... small. But there was an overwhelming discussion online about the appropriateness of this casting choice by director Sam Levinson (who also created Euphoria, the TV show in which Zendaya plays a 17-year-old).

But do Dern's comments about the "cultural awareness about the patriarchy" overplay the hand?

Above all else, Hollywood values profit. And if age-gaps in films become unpopular enough to dent the bottom line, that will lead to change quicker than any form of activism or policy.

But until that happens, we are also relying on the voices of those who play these roles to yell it from the rooftops. We might be aware of the issue, but that's not enough to solve it.

In late May, 100 actors and public figures signed an open letter in Britain, asking for better on-screen representation of older women, to help fight "entrenched ageism" in the entertainment industry.

In the letter, the Act Your Age Campaign said women in the UK have a "shelf life" on screen, while men have a "whole life".

"Ageism targeting women is an entrenched industry staple that is outdated, harmful and neglects the millions of audience members who appreciate seeing women over 45 telling the stories of our lives," it continued, before ending with eight recommendations to address the problem.

And all of these recommendations come down to two things: creating opportunities for women over 45 on screens, and normalising seeing them there.

We know it works, and there are stories to be told here. 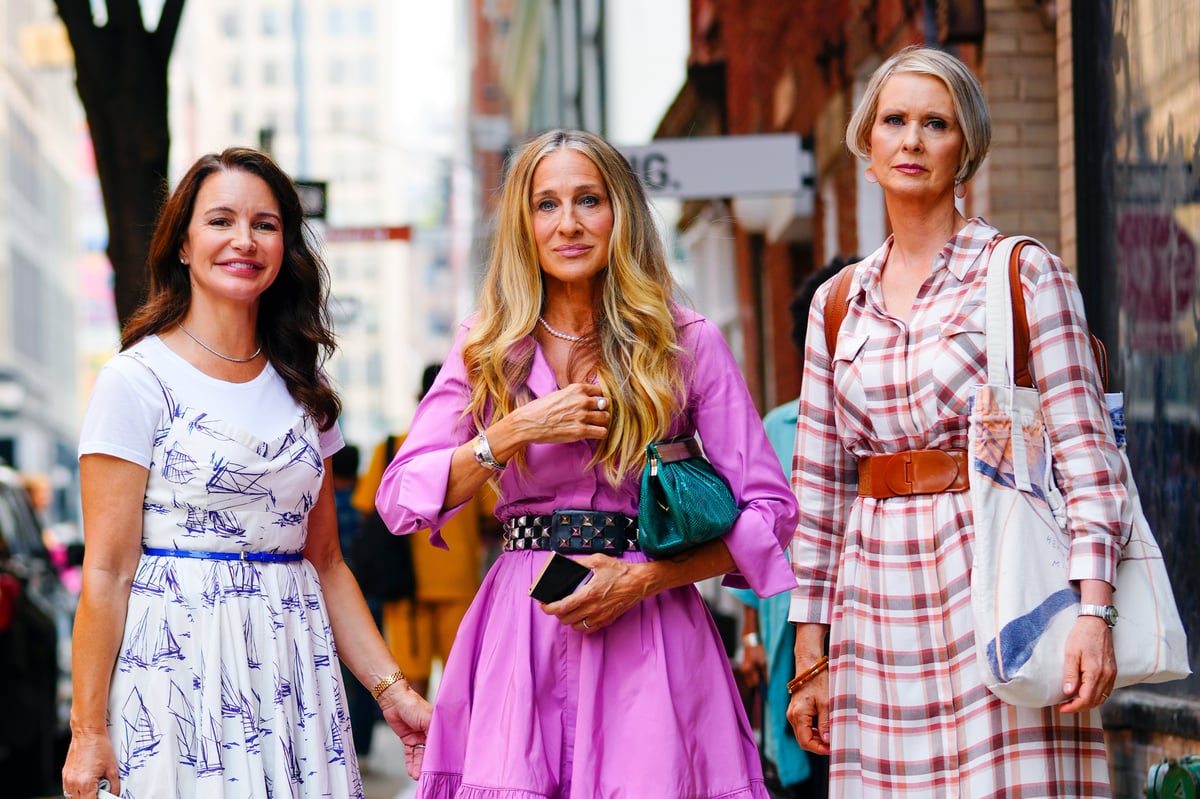 There's a reason each And Just Like That episode became a cultural moment, even if most viewers could admit it didn't reach the same heights as its original series, Sex And The City.

A few weeks ago, Mamamia interviewed Tasma Walton about the Australian film How To Please A Woman, which features a cast mostly made up of women over 40 and tells a unique, hilarious and affirming story about their wants and needs.

"I think it was quite a long period of time where if you were going to be an actress in this industry, you had to fit that ingenue mould," Walton told Mamamia.

"And that was kind of it. If you didn't, then you didn't get runs on the board at that point and it was going to be very, very difficult for you to arrive at a later point because there were just very few kinds of roles available; it just didn't really exist. You certainly would never see leads, lead females, in that kind of age group."

This is an issue of equal opportunity.

We may now see the age-gaps more clearly, but the solution is going to take more than just recognition.

J
jennifercw a month ago

Reply
Upvote
I am OVER watching 20 year old women with 40 year old men. If you want me to care about a couple, they'd better be the same age.