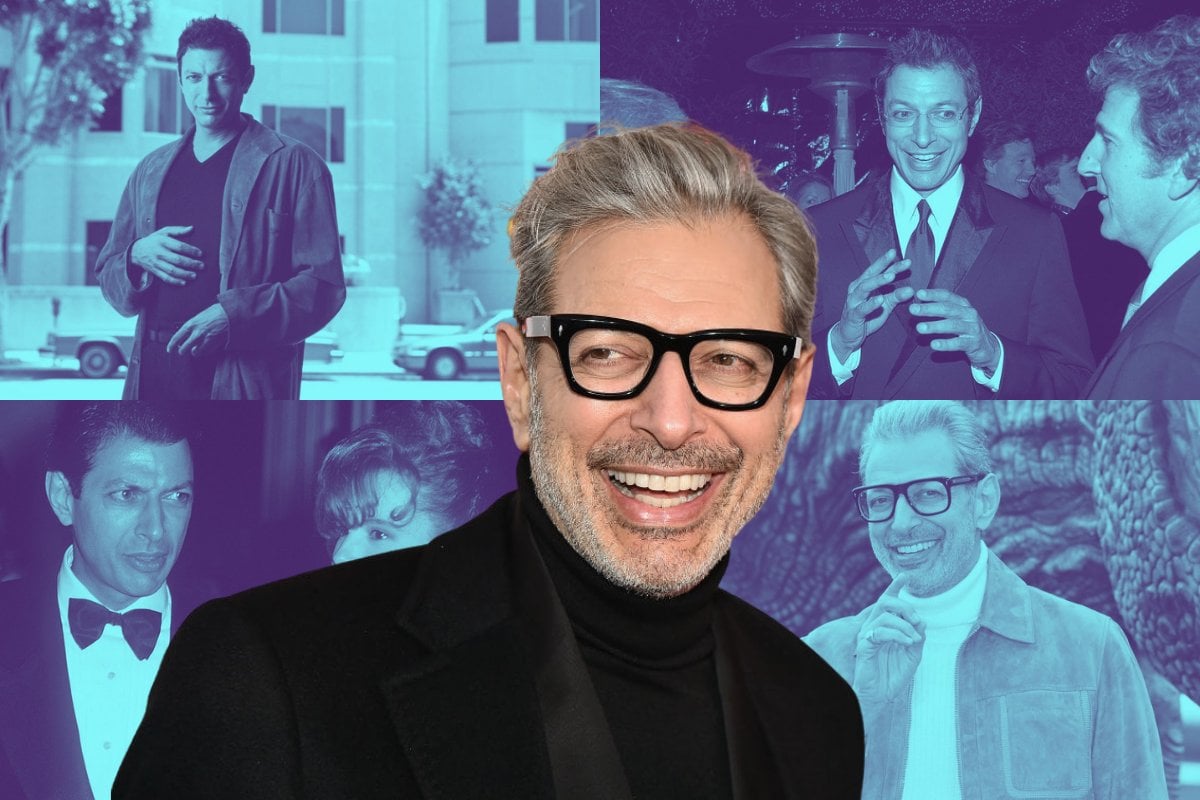 For someone who turns 70 this year, Jeff Goldblum is a busy man. He was just seen walking the runway for Prada at Milan Fashion Week, he’s got the new Jurassic World movie – oh, and he’s dad to a four-year-old and a six-year-old.

Goldblum has been married three times, and engaged a couple more times on top of that, but it was only with his current wife, Emilie Livingston – who is 30 years his junior – that he started to think about having children.

“I feel right on schedule and I love our two boys,” he told E!Online. “Everything seemed to happen perfectly. I appreciate it wildly.”

Goldblum has never had an issue with commitment. In 1975, he met actress Patricia Gaul and moved in with her just three weeks later. He was still in his twenties when he married her. Gaul had a brief role as Goldblum’s partner Annie in The Big Chill, but their real-life marriage was over by the mid-1980s.

Goldblum met Geena Davis while they were filming vampire comedy Transylvania 6-5000, and she went on to play his love interest in The Fly, with their real-life chemistry helping to make the movie a hit. In 1987, they were holidaying in Las Vegas when they impulsively decided to get married, in a kitschy wedding chapel.

For a few years, they were Hollywood’s favourite quirky couple. But after filming Thelma & Louise, Davis came home and filed for divorce.

“I’m sure we’re both pretty sad,” she told People at the time. “We certainly had high hopes, every good intention. It’s upsetting.”

"I was struck – I'd been a big fan of hers,” he told the Chicago Tribune.

They got engaged, but never made it as far as a wedding. There was another engagement, to Catherine Wreford, a Canadian singer/actress Goldblum met during a security inspection at an airport.

They made the 2006 mockumentary Pittsburgh together, which was all about Goldblum trying to get Wreford a green card by appearing with her in a regional theatre production.

But before long, Goldblum was single again, and it looked like he was never going to be a father. Not that it bothered him.

Then one day in 2011, Goldblum was at the gym when he met Emilie Livingston. Livingston had been a champion rhythmic gymnast – she competed for Canada at the Sydney Olympics – and then gone on to become an aerialist.

“She was working out, just by herself, focused, not showing off,” Goldblum explained to Parade. “I was immediately thrilled by her and walked over. I think I said, ‘Geez, how’d you learn to do that?’”

Goldblum says he talked to his friends about Livingston (“I was like a teenager”) and brought her back to his house the day after they met.

“There’s a great view from up there,” he told CBS News. “And we kissed for the first time.”

She told him she was studying acting.

“I said, ‘I teach acting. Maybe I’ll help you with your monologue or something.’ She said, ‘Oh, really?’ She didn’t know who I was.”

Livingston has ended up working in movies. She was Rihanna’s body double in the movie Valerian And The City Of A Thousand Planets, doing her burlesque dance for her. She also did Emma Stone’s dancing in La La Land.

Livingston introduced Goldblum to her world, taking him to a flying trapeze class.

“I like to be athletic, but it was difficult,” he admitted.

The couple married in 2014, with their poodle, Woody Allen, wearing a bow tie for the big day. It was an exciting time for them.

The day before the wedding, Livingston had found out she was pregnant and told Goldblum. The couple had only started trying for a baby a month earlier.

“I’m at a different place now. I was enthusiastic to marry her and try to have a baby.”

When the couple's first son was born, Goldblum was 62. They named him Charlie Ocean – Charlie, after Goldblum’s uncle who died in his twenties as a pilot in WWII. Not long after the birth, Goldblum appeared on Conan, raving about his baby.

He said his favourite time of day was bath time.

"We get in the bathtub every night, the three of us, and we give him a bath. So cute."

Before Charlie turned two, he had a little brother: River Joe. Goldblum says parenthood has changed everything for him.

“Your heart cracks wide open,” he told Vulture. “You’re so deeply enchanted by them and in love with them.”

“I’d never done a Lego in my life before these kids. Never. I just left a pile before I came here. We were all playing. They say, ‘Dada, come here, let’s play.’”

The two boys have made brief appearances in Goldblum’s series The World According To Jeff Goldblum.

“There’s not lines or anything. But when I see it, I’m always touched.”

So what’s it going to be like for Goldblum as his sons go through primary school and he’s in his seventies?

“You know, when I told Albert Brooks a few years ago we’re gonna have a baby, he said, ‘I’ll give you a word of advice. Look for schools with ramps.’ Ramps!” he laughed.

“What I’m saying is that this late-blooming business, in all aspects of my personage I’m flowering. And I’m fuller and fruitier than ever, yeah.”

Reply
Upvote
They met at the gym and she didn’t know who he was ?? I get that she’s 30 years younger but who doesn’t know Jeff Goldblum, maybe he took his glasses off ?!!??
A
alix12 5 months ago