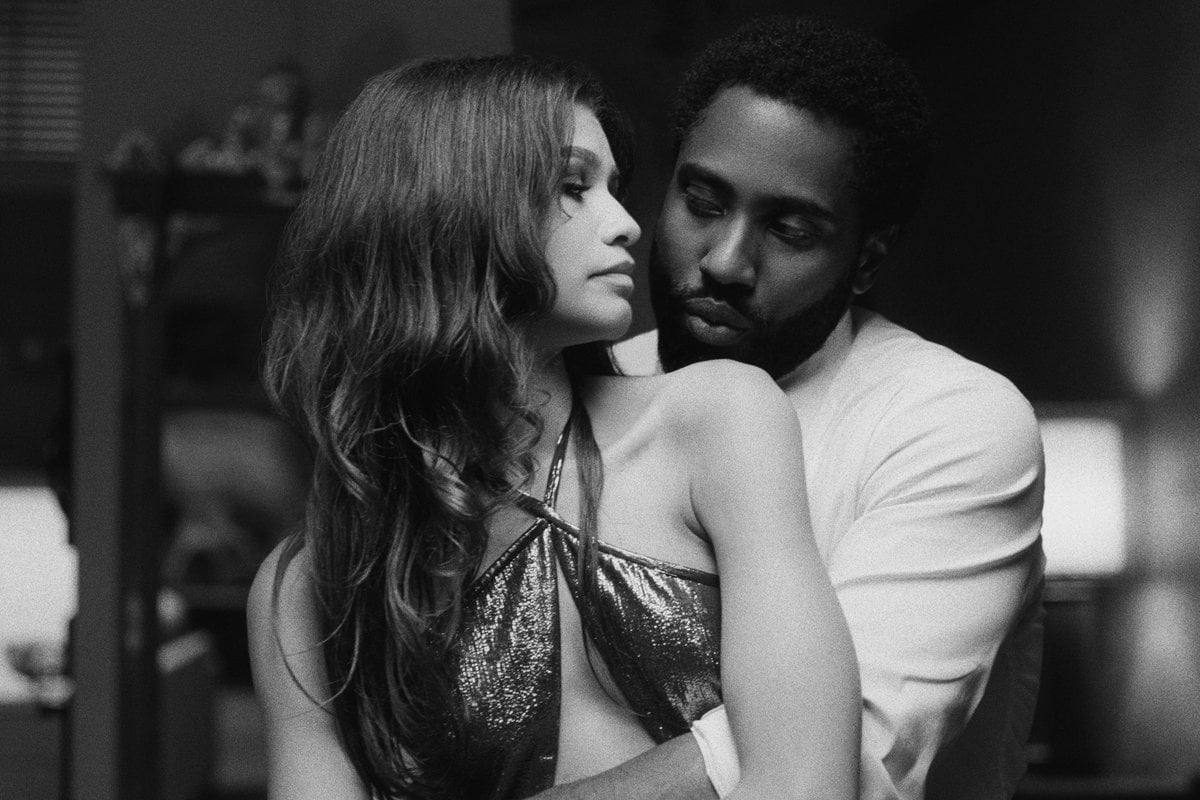 Malcolm & Marie, Netflix's buzziest new movie, was flung together in 14 days in a remote slice of California.

All while the COVID-19 pandemic was systematically forcing Hollywood sets to come to a halt.

Among the productions hit with a surprise shutdown was season two of Euphoria, the critically acclaimed drama starring Zendaya and created by Sam Levinson.

It was a situation that saw the pair wondering what to do next. How to tell a small story in a remote location with just a handful of people, a loose script, and a camera.

Take a look at the trailer for Netflix's Malcolm & Marie below. Post continues after video.

The result is Malcolm & Marie, a two-hander, black and white film with a story that takes place over the course of just one night, allowing the audience to slide into a dramatic moment in time with a couple on the blink of an explosion.

Malcolm, played by John David Washington (yes, the son of Denzel but also an actor in his own right with film credits such as BlacKkKlansman and Tenet) is an up-and-coming filmmaker who has just returned home from the premiere of his first big movie.

He's riding on a creative high and immediately knocks back a celebratory drink as he begins to dance around the lush yet remote Los Angeles home the studio has put him up in.

Malcolm's girlfriend Marie (Zendaya), whose life as a former drug addict inspired the movie that has just received such rapturous applause, trails in more quietly behind him and begins to throw together a late-night snake of macaroni and cheese.

It's just past 1am yet it's clear by the slow, simmering anger bubbling up inside Marie as she cooks that the real action of the night is just beginning.

The plot of Malcolm & Marie then unfolds via a series of chaotic, yet beautiful vignettes.

The couple spar over everything from the fact that Malcolm forgot to thank Marie during his speech at the movie premiere to how he treats his loved ones, and even the very genesis of their five-year relationship. When an older and more worldly Malcolm "saved" a young and broken Marie when she was at the height of her addiction.

Now she blames him for making their lives all about him while he lashes back with the accusation that her stalled career as an actress is no one's fault but her own.

And around and around it goes, like a fever dream coated in a slick layer of Hollywood glamour and left to meander along with a script that feels sometimes improvised yet always unwieldy. A story that doesn't really warrant a nearly two-hour run time.

And yet Malcolm & Marie still manages to be a very enticing watch. 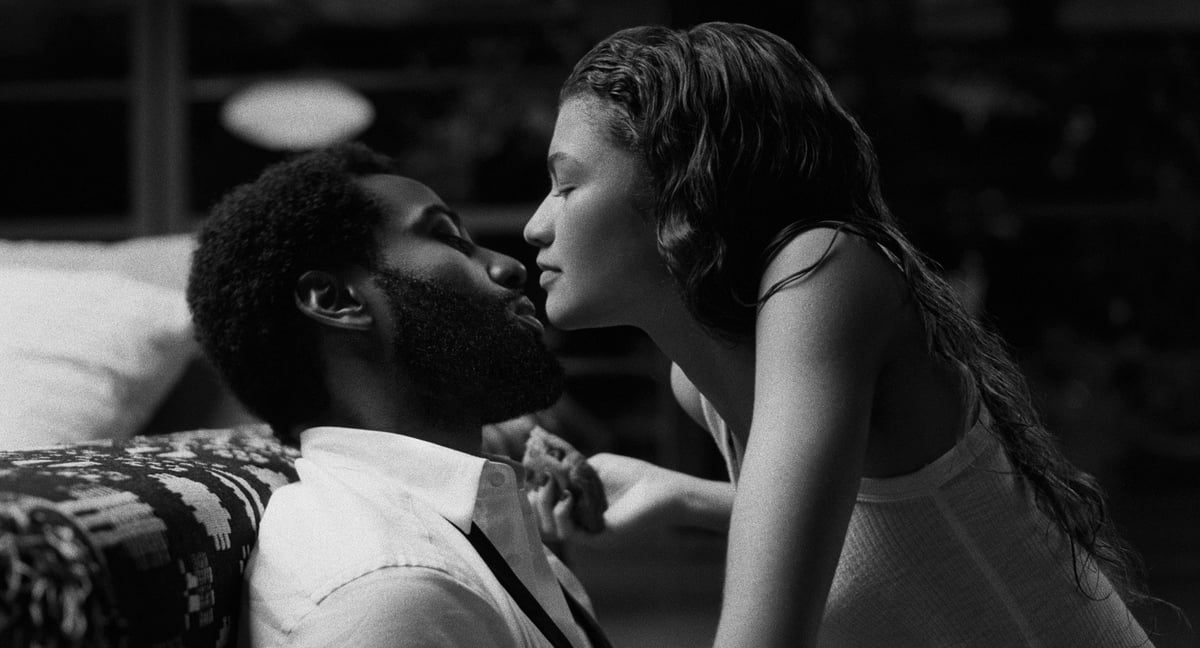 The chemistry between John David Washington and Zendaya is the highlight of Malcolm & Marie. Image: Netflix.

First of all, nearly every frame of the film looks like a standalone work of art, which is no mean feat given the limitations of having to film every scene in and around just one house.

Of course, you can't just rely on stylised black and white glamour shots to hold a two-hander film like this together and that's where the chemistry of Zendaya and John David Washington comes into play.

The two actors bounce off each other with such passion and ferocity that your head will whip from one side of the screen to the other with a sense of urgency normally reserved for a grand slam tennis match.

Malcolm & Marie is a wildly over-indulgent movie, one where Sam Levinson has allowed his prose to run rampant without fear that a studio would insist on cuts. The result is basically a showpiece for both Zendaya and John David.

Let's just say that most movies meander around an emotional level of five or six before kicking it up to ten in the final act.

But with Malcolm & Marie it's all ten, all the time. 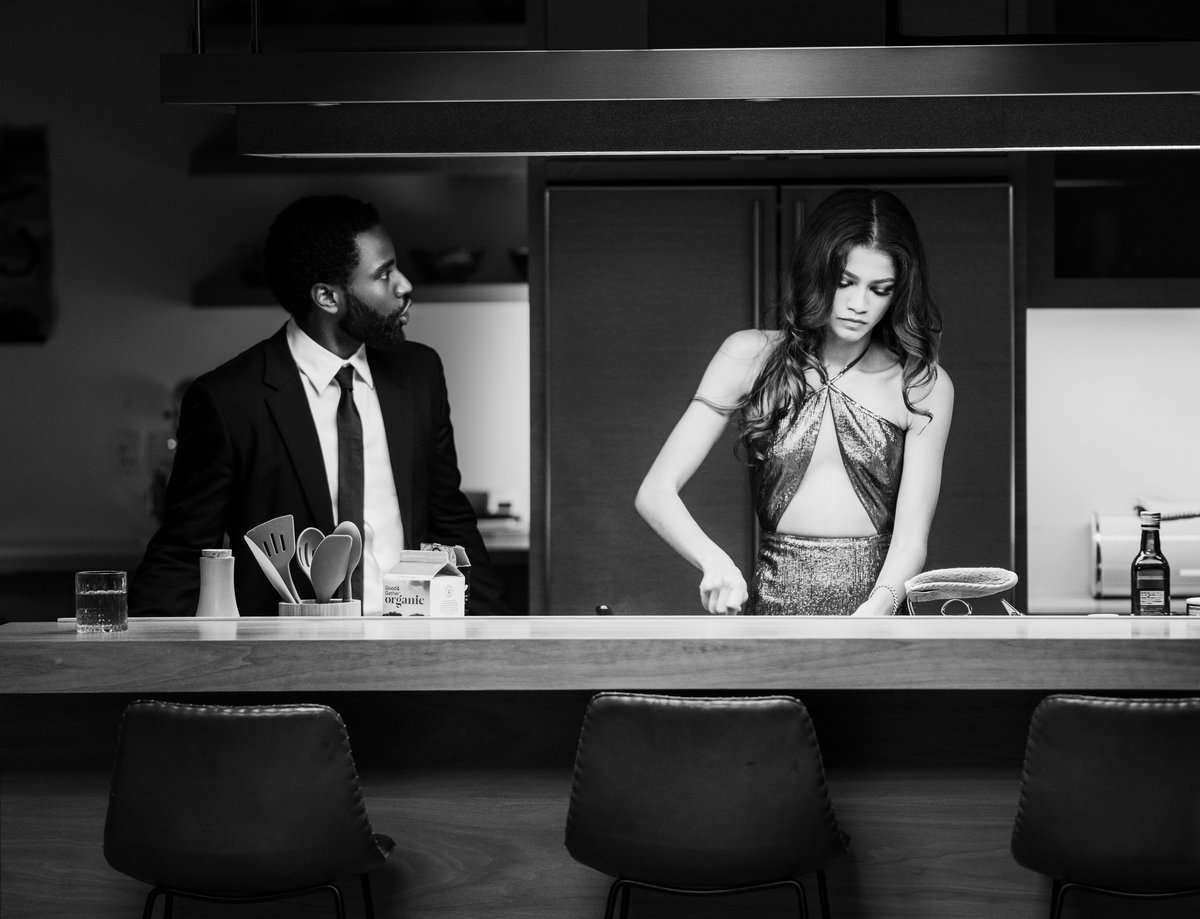 The film is basically a series of stitched together show-stopping monologues, with each actor taking it in turns to fire their shot as the night of power struggles and passion unfolds.

In the hands of less-skilled actors, a setup like this would have been a much harder slog to sit through. In particular, Zendaya imbues Marie with an intricate complexity that makes the character so much more than a vexed girlfriend.

When watching her scenes unfold on screen, it's interesting to note that this is in fact Zendaya's first leading dramatic movie role.

Before Malcolm & Marie dropped on Netflix, there was already a rumble of disapproval building online over the character's age difference.

John David Washington is 36, making him 12 years older than Zendaya, 24, and when anticipation for the movie first started to bubble away, there was immediate backlash to the idea that the film was playing into Hollywood's deeply ingrained age gap problem.

Of course, both movies and TV shows alike have a long and sordid history of romantically pairing men in their forties and even fifties against actresses in their twenties and not because it was an integral part of the story.

More so, it's indicative of a wider issue in the industry where men are still seen as desirable and, more importantly, as bankable in their later decades whereas women create more buzz as ingenues.

However, it's not an issue that should stand solely on the shoulders of Malcolm & Marie. An age gap also exists between the characters in the film and plays a part in their relationship dynamic and the resentment they are starting to feel towards each other.

All in all Malcolm & Marie is the result of a creative experiment that has paid off and it's interesting to observe one of the few films that was created, shot, edited, and released during the pandemic.

A movie that started in a flurry of chaos (Zendaya has stated in interviews that the first few days of filming were so off the rails that all the footage was unusable) and ended up being sold to Netflix for $30 million.

Malcolm & Marie is a chaotic, overly indulgent and stylised love story, and for a movie birthed in a pandemic, pays homage to a year that forced so many of us to think outside the box.

Malcolm & Marie is available to watch now on Netflix. It is rated MA15+.