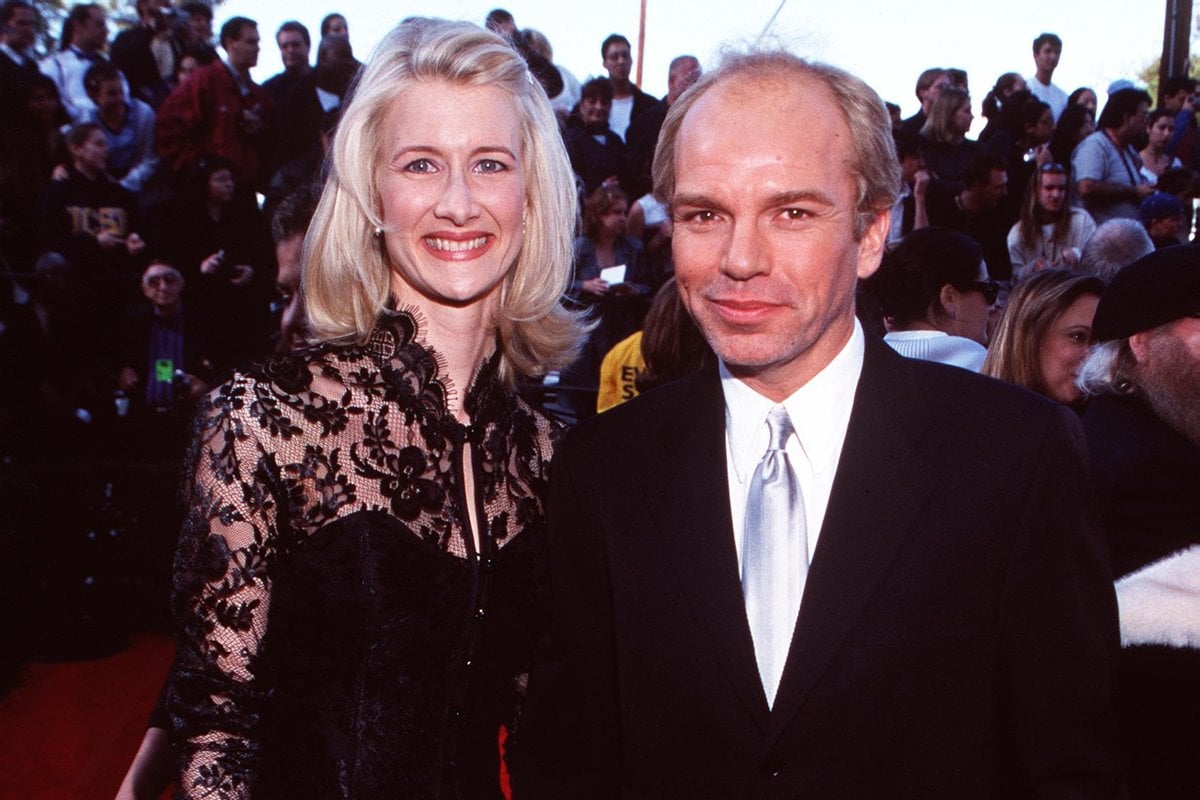 In 1997, it seemed like actress Laura Dern was at the height of her career, then she made a decision that saw her effectively blacklisted for a year.

It’s a story that can be traced back to her appearance in the landmark episode of the sitcom Ellen where Ellen DeGeneres famously came out as gay, in which Laura agreed to guest-star in as lesbian character Susan.

But after the now-famous episode of television aired, and backlash around Ellen herself swelled, no one would give Laura a job for more than a year.

At the beginning of 2020, Laura Dern won the Academy Award for Best Supporting Actress. During her acceptance speech at the 92nd Academy Awards, where she was honoured for her work in the Netflix film Marriage Story, the 53-year-old actress referred to her parents as her ‘heroes’.

Laura Elizabeth Dern was born into a Hollywood family, as the daughter of celebrated actors Diane Ladd and Bruce Dern on February 10, 1967, in Los Angeles.

Over the years, Laura has accompanied both of her famous parents to their own moments of awards show glory, but many years ago her birth came at a time of tragedy for her Oscar-nominated parents.

Before Laura’s birth, Dern and Ladd had welcomed another daughter called Diane Elizabeth Dern who drowned when she was just 18 months old. Doctors then told Ladd she probably wouldn’t be able to have another baby.

“We suffered the tragedy of our daughter’s death together and thought another child would help us, but we were so bruised,” she told Parade Magazine in 1992. “I was terrified, being on my own with Laura. I had to force myself not to be overly protective because I had lost one child.”

The couple, still broken from Diane’s tragic death, then went on to divorce when Laura was just two-years-old.

Moving between the lives of her actor parents, Laura Dern effectively grew up on film sets, a childhood that cemented her desire to become an actress in her own right.

Laura was just six years old when she appeared in her first movie, playing the daughter of her mother’s character in the 1973 film White Lightning, opposite Hollywood icon Burt Reynolds. The following year she played a small role in Martin Scorsese’s Alice Doesn’t Live Here Anymore, which also starred her mother Diane.

However, as her film industry star began to rise, with meatier movie roles pouring in and Laura being anointed Miss Golden Globe at the age of 14, a role only bestowed upon the most promising of Hollywood offspring, Laura’s parents attempted to put a stop to their young daughter’s career aspirations.

Diane Ladd, who had seen the worst sides of the industry during her own career in front of the camera, attempted to protect her daughter from travelling to endless far-flung movie sets for work by refusing to give parental consent.

In retaliation, Laura sued her parents for emancipation when she was 16, all so she could work the same gruelling hours on set as her adult co-stars without asking her parents’ permission. Despite the legal separation, Laura managed to stay on relatively good terms with both her parents during her late teens and early adult years.

At this stage of her career, it seemed the talented, blonde-haired, charismatic daughter of Hollywood stars was positioned to walk down a more traditional acting career path, and she began to receive offers to play the standard girlfriend/love interest roles in the next wave of big-budget studio releases.

She ended up turning down the lead role in the next big ‘Brat Pack film’ (widely thought to be iconic teen rom-com 16 Candles) in favour of a more character-driven role as a blind girl who falls in love with a boy with a face-disfiguring bone disorder in Peter Bogdanovich’s Mask.

Her true breakout role came at age 17 in David Lynch’s 1986 psychological horror Blue Velvet, opposite Isabella Rossellini and Kyle MacLachlan, the first of three movies she would go on to star in with the acclaimed filmmaker.

At this stage of her career, even with some of her quirkier film choices, it seemed that the rising star that was Laura Dern could do no wrong.

She was nominated for her first Oscar in 1992 for Best Actress for the film Rambling Rose.

In a history-making move, her mother Diane Ladd, who starred in the same film, was nominated for Best Supporting Actress. It was the first time a mother and daughter pair were ever nominated for Oscars for the same movie.

In fact, Princess Diana herself was so charmed by the movie and the story of the mother/daughter duo that she arranged for them to fly to London for a royal screening in 1991, just so she could meet them.

Laura's life changed forever in 1993 when she landed the juggernaut of film roles after being cast as Dr Ellie Sattler in Steven Spielberg's blockbuster Jurassic Park, beating out both Helen Hunt and Gwyneth Paltrow (despite that fact that she is Steven Spielberg's goddaughter) to secure the part.

With this type of success in the rearview mirror, it's easy to see why Dern thought she had a bit of a career safety net to play with when it came to saying yes to the role on Ellen.

Dern happily accepted the role of Susan in The Puppy Episode, even though her management team, family and friends all attempted to talk her out of it.

“I didn’t think twice about it. It was a great opportunity,” Dern said in an interview with New York Magazine of her decision to play Ellen DeGeneres’ love interest on the history-making show.

“When Ellen looked in my eyes, she said it was the first time she said 'I’m gay' out loud,” Dern said in the same interview. “We didn’t rehearse it, when she said it to me she was looking in my eyes and holding my hands and I felt her shaking."

After accepting the role, Laura said: “calls started coming in” from advisers in Hollywood “who were out gay men” telling her not to take the part.

“A lot of people in my life were really worried,” she added.

In one particularly sobering Ellen experience, Laura said she was on set with Oprah, who famously played Ellen’s therapist in the same episode when police suddenly swarmed the set and instructed them they needed to leave the stage because there had been a bomb threat.

Laura has since said that she spent the years following Ellen struggling in both work and safety and that it was the only time in her career when she needed to employ a full security detail.

For more than a year following her guest role on Ellen, no one would give the former golden girl a job.

"It was significant," the actress told Vulture of effectively being blacklisted. "It was significant because I was doing successful independent movies, and, only months before that, I was in Jurassic Park, the most successful movie ever. So it was like, you’re being offered this, you’re being offered that — and it just stopped. Which is kind of wild."

In an odd twist of fate, guest-starring on Ellen changed Laura Dern's life in more ways than one.

While filming the role of Susan, which stretched across two episodes, and fresh from her break-up with her Jurassic Park co-star Jeff Goldblum, Laura met and fell for actor Billy Bob Thornton.

After walking numerous red carpets together, becoming engaged and moving in together, their love story came to an abrupt end when Billy Bob left to film the 1999 dramedy Pushing Tin, with actress Angelina Jolie.

The stars, who infamously wore vials of each other's blood around their necks during their union, shocked the world in May 2000 when they were married in Las Vegas.

Despite the numerous magazine covers and tabloid inches chronicling the scandalous news, no one was more shocked by the new romance and wedding than Laura herself, who, in a plot twist worthy of a movie, had actually babysat Angelina when she was a child.

“I left our home to work on a movie, and while I was away, my boyfriend got married, and I’ve never heard from him again," Dern said of their surprise break up many years later, in an interview with Talk magazine. "It’s like a sudden death. For no one has there been any closure or clarity."

In 2016, musician Melissa Etheridge recounted the true ugliness of the break-up of Laura Dern and Billy Bob Thornton, calling it "nasty" while speaking with Andy Cohen on his Sirius XM radio show.

“I was around when Angelina was not doing nice things with Billy Bob to Laura Dern,” she said during the interview. “I helped Laura move out of her house with Billy Bob – I like broke into their home to get their stuff out because it was so nasty.”

Happily, Laura met and fell in love with musician Ben Harper not long after her relationship with Thornton ended.

Harper then filed for divorce in October 2010 and although they attempted a reconciliation in the years that followed, Dern reinstated the proceedings in 2012 and they reached a confidential settlement in 2013.

Touchingly, Laura Dern made sure to mention and thank her step-children with Ben Harper, CJ and Harris, during her Oscar acceptance speech for her role in Marriage Story.

It may have been a rocky road to success, but with an Oscar in her hand and two successful seasons of the hit drama Big Little Lies freshly adorning her resume, it's easy to see that we're moving into the decade of Laura Dern.

This story was originally published in October 2020, and updated in April 2022.

Reply
Upvote
2 upvotes
I feel these anti-Angelina articles are unfair. Laura Dern was never engaged to BBT. She even herself said 'boyfriend'. Not fiance. Also overlooked is that Dern got together with  Ben Harper whilst Harper was not only married, but his wife was pregnant! This is all a matter of public record.
J
Janelle Claire Berner 2 years ago

If I were her, the Ellen show episodes would be the proudest moment of my career.