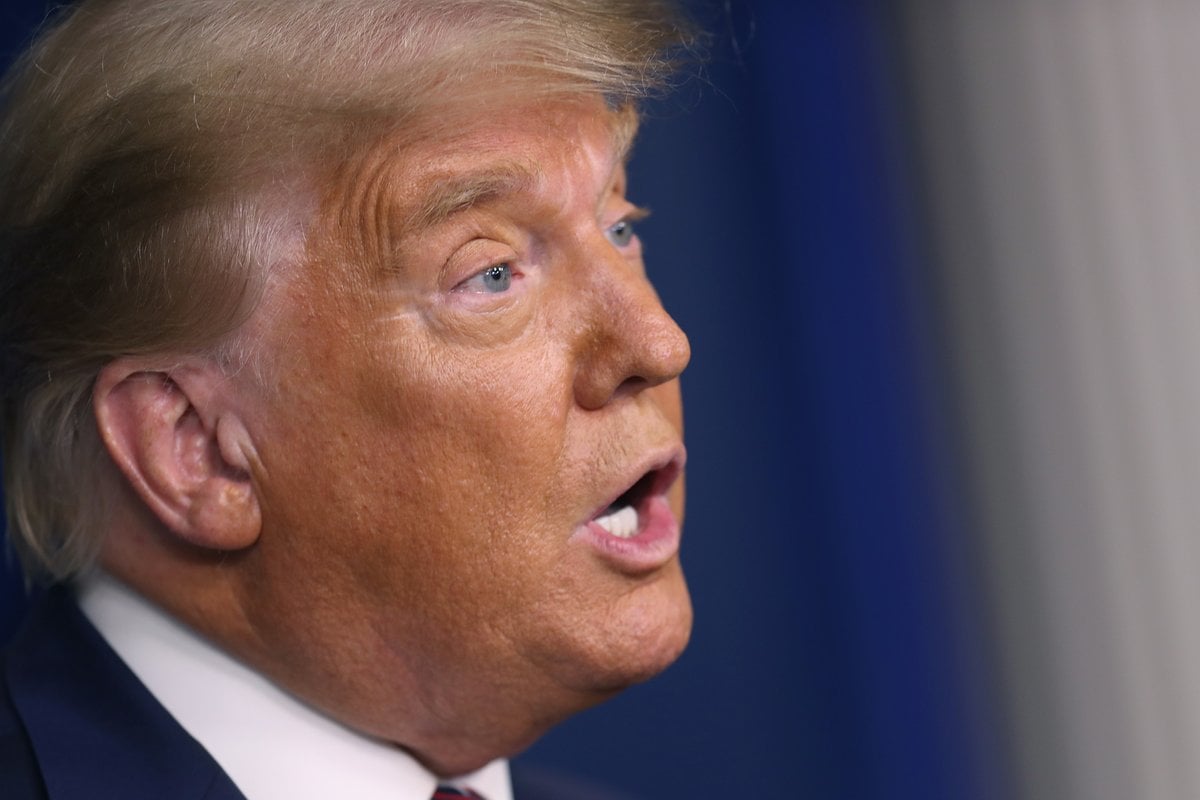 The sun is now setting on the third day of election fallout in the United States. And still we have no firm result in the presidential contest.

Democratic candidate Joe Biden is currently sitting ahead of incumbent President Donald Trump in the race to the required 270 electoral college votes (see our previous article for a simple explanation of how US elections work).

There are still four states in doubt that, combined, offer 60 electoral college votes.

Here's what you need to know about what's happening right now.

The path to victory for Biden and Trump.

In order to win the presidency, Joe Biden only needs to claim just one of the remaining states: Nevada, Pennsylvania, North Carolina or Georgia.

Donald Trump, meanwhile, would need to win most or all of them to stay in the top job.

Be patient, folks. Votes are being counted, and we feel good about where we are.

So where do those states stand?

According to the latest updates available Friday morning, it looks like this:

The vast majority of votes currently being counted are mail-in ballots, in which Biden has a clear advantage.

While the Democrats urged their supporters to use this method to avoid crowds amid the COVID-19 pandemic, Republican Donald Trump spouted baseless theories that such votes would be vulnerable to fraud.

Trump accuses Democrats of trying to "steal" the election.

In a press conference this morning (Australian time), President Donald Trump accused the Democrats of trying to "steal" and "rig" the election.

"If you count the legal votes, I easily win," President Trump said.

"If you count the illegal votes, they can try to steal the election from us."

The President alleged that his observers have been denied access to the vote count in Pennsylvania and Detroit, Michigan (which was recently called in favour of his opponent Joe Biden).

"People know what is happening, and they have seen what is happening. Incidents reported shortly. A tremendous investigation going on and this is a case where they are trying to steal an election, to rig an election and we cannot let that happen," he said.

So far, his claims about voting irregularities have proven entirely baseless, and his litigation attempts fruitless.

Three major TV networks in the US cut off the press conference early, concerned about the misinformation being spouted by the President.

US President Donald Trump's campaign has lost court rulings in the closely contested states of Georgia and Michigan, even as it vowed to bring a new lawsuit challenging what it called 'voting irregularities' in Nevada.

In the Georgia case, the campaign alleged 53 late-arriving ballots were mixed with on-time ballots. In Michigan, it had sought to stop votes from being counted and obtain greater access to the tabulation process.

State judges tossed out both the suits on Thursday.

Judge James Bass, a superior court judge in Georgia, said there was "no evidence" that the ballots in question were invalid.

In the Michigan case, Judge Cynthia Stephens said: "I have no basis to find that there is a substantial likelihood of success on the merits."

Bob Bauer, a senior adviser to Biden's campaign, called the various Trump lawsuits a "meritless" distraction and said the strategy was designed to undermine the integrity of the electoral process.

"This is part of a broader misinformation campaign that involves some political theatre," he said.

"They're intended to give the Trump campaign the opportunity to argue the vote count should stop. It is not going to stop," he told reporters on Thursday.

Election legal experts have said Trump's legal strategy is unlikely to have a decisive impact on the outcome of the election.

Trump, Biden supporters protest across US.

A second day of sometimes duelling demonstrations over the integrity of the US presidential election continue in Philadelphia and other cities.

Supporters of Joe Biden have rallied around the slogan to "Count every vote," believing a complete tally would show the Democratic former vice president had beaten Republican President Donald Trump. 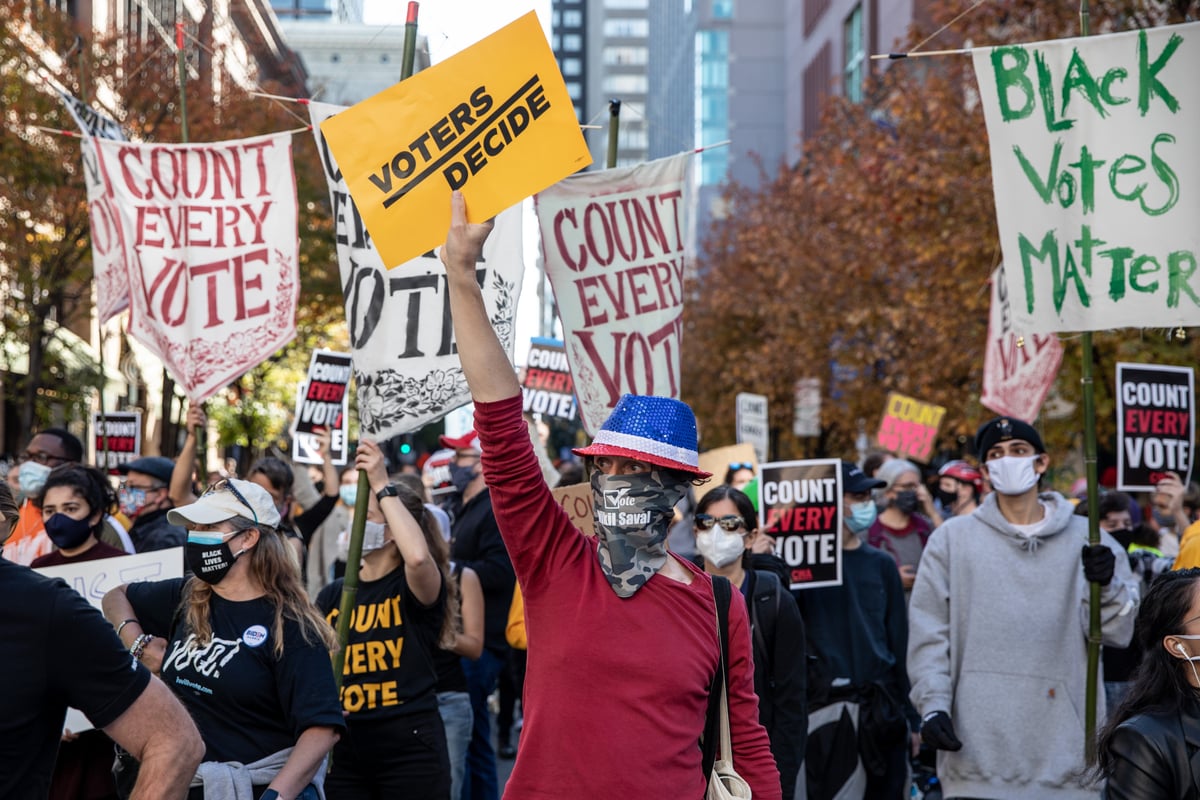 Biden supporters take to the streets in Pennsylvania. Image: Getty.

Some ardent Trump backers have countered with cries to "Protect the vote" in support of his campaign's efforts to have some categories of ballots, including some votes submitted by mail, discarded.

Both factions appeared outside a vote-counting centre in Philadelphia on Thursday morning, where election staff steadily worked through a mountain of still-uncounted mail-in ballots that will determine whether Biden or Trump will take Pennsylvania's crucial 20 Electoral College votes.

In Washington, a procession of cars and bicycles, sponsored by activists from a group called Shutdown DC, paraded slowly through the streets of the capital to protest "an attack on the democratic process" by Trump and his "enablers," according to its website.

Most demonstrations in cities around the country have been peaceful and small — sometimes amounting only to a few dozen people with signs standing in a city centre — as Biden's path to victory looks a bit more assured than Trump's, even though either outcome remains possible.

More to come throughout the day...

Reply
Upvote
That entire country is a disaster zone. I don't know how anyone can sort it out. People are So divided and so overtaken by covid and now probably the democrats won't even have control of the senate to pass stuff that needs passing.
cat 4 months ago

Reply
Upvote
@kathp Biden spent 40 years in the senate where he was highly regarded for his ability to work across the aisle. And there are quite a few republican senators who supported him over trump. If anyone can manage it, he can.
simple simon 4 months ago

Reply
Upvote
@kathp The American senate is not like the Australian senate; party members are allowed to cross the floor.
laura__palmer 4 months ago

I hope that orange nightmare is booted.
cat 4 months ago

Reply
Upvote
@laura__palmer I think he is an idiot. He operates very well at the lowest common denominator but I think he’s literally incapable of accepting that he lost. He doesn’t give a damn about democracy or the country, he only cares about himself. Someone is going to have to put him out of his misery.
I know he’ll get booted, I just hope he ends up in jail.
flissyb 4 months ago

Reply
Upvote
2 upvotes
@cat I don't think Trump even cares about the Republican party. He knew they were the party that would accept him and his ideals but If he had the chance to he'd rule completely on his own. The Republican party is just a vehicle for him.
cat 4 months ago

Reply
Upvote
@flissyb oh I absolutely agree, he would have created the Donald Trump Party if it wasn’t a two arty system.
laura__palmer 4 months ago