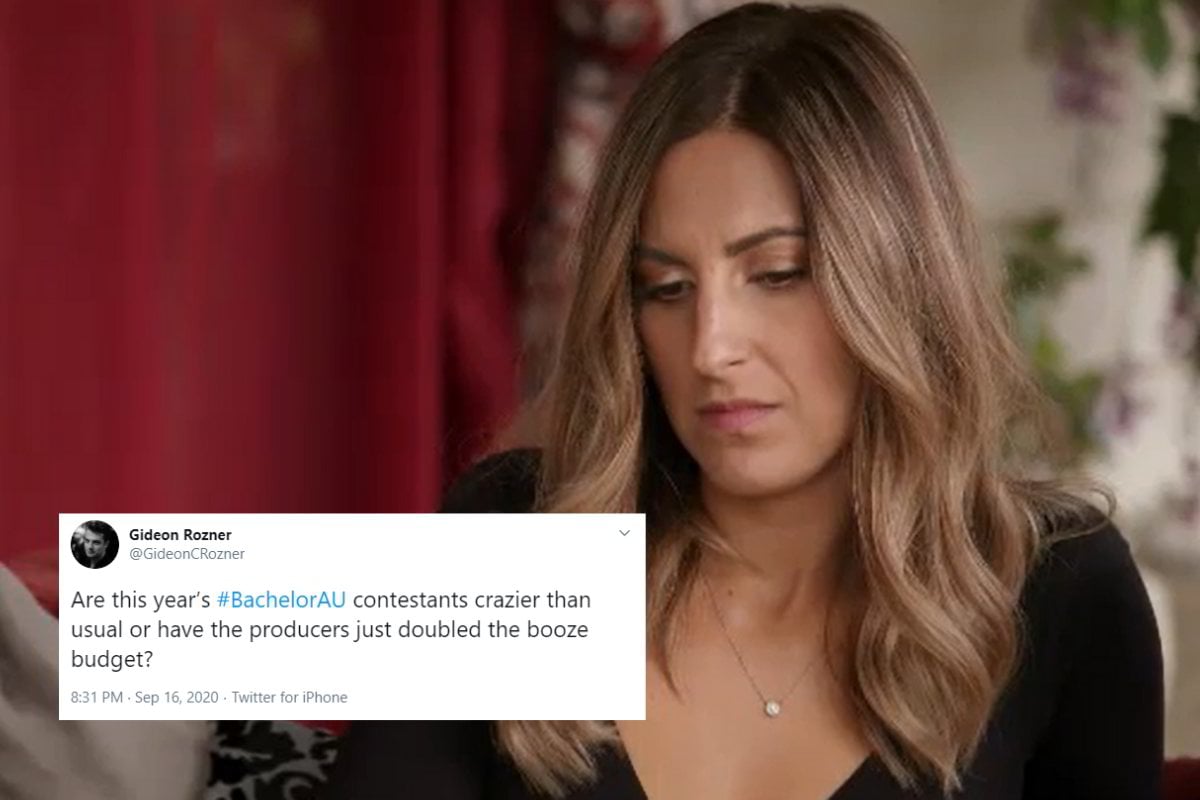 Once again, The Bachelor served up a healthy dish stuffed with drama, feuding and lamas. But this episode we also got a few nuggets of L-O-V-E when Bella was picked for a single date and told Locky that she's officially falling in love with him.

Cute! ...we think? It's hard to follow the fairytale when there is so much drama going around, to be honest.

Following the cuteness (??) there was another explosive cocktail party.

When Bella waltzes into the cocktail party with a rose in one hand and Locky holding the other, you just know that sh*t is about to hit the fan.

Irena is already shaken up, and hearing about how Bella has reconnected with Locky and they are stronger than ever, just pushes her over the edge.

"Bella has come back so confident, and I don't know where I stand now."

"I've been waiting my entire life for Locky. And the fact he might be slipping through my fingers is devastating. The thought of not being with him is already breaking my heart. Like, should I just go home now?"

We know we were watching with awkward faces as all this heartbreak unfolded. But what did the rest of Australia think? Here, we round up the best Twitter reactions to tonight's episode of The Bachelor.

Everyone watching #TheBachelorAU waiting to see what goes down between Irena and Bella like: pic.twitter.com/JjZS3XzT2N

Bella trying to keep a lid on the meltdown at breakfast #TheBachelorAU pic.twitter.com/KyxlBqiBmY

When you just wanted to get a few insta followers but then you ended up on this show for 4 months#TheBachelorau pic.twitter.com/c4ycCNWhNH

Irina listening to Bella talking about their date. #TheBachelorAU pic.twitter.com/iNL6WwEEah

Locky: "I saw a side of Bella that I didn't like"

Also Locky: "I'm gonna have extra time with Bella, because I have to get to the bottom of all this drama and look into her big brown eyes, despite the other girls writing thoughtful toasts"

The producers forcing us to accept their plate metaphor #TheBachelorAU pic.twitter.com/QTK2ywJuL0

No more fights.
Bella the next cocktail party #TheBachelorAU pic.twitter.com/mApsVOwuWh

Irina listening to Bella talking about their date. #TheBachelorAU pic.twitter.com/iNL6WwEEah

‘I’m not getting emotional tonight’

I already miss Juliette providing the entertainment during the cocktail party #TheBachelorAU pic.twitter.com/nLW1AvHPFr

All of Australia is crying right now, Irena my heart breaks! #TheBachelorAU

Just want to give Irena a hug rn #TheBachelorAU

LOCKY IS NOT WORTH YOUR TEARS, IRENA #TheBachelorAU

Irena is wayyy too good for him!! #TheBachelorAu