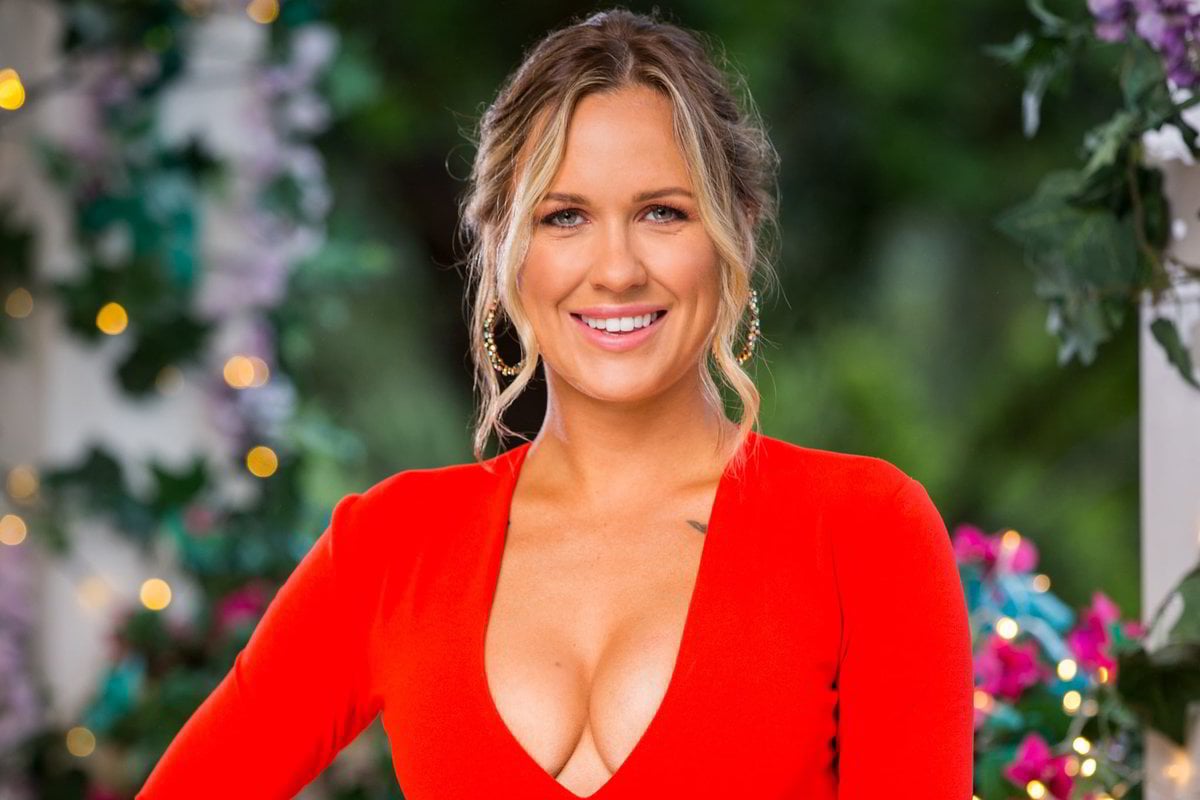 After sitting through virtual rose ceremonies and a few awkward group dates in lockdown, last night's episode of The Bachelor saw the contestants return to the mansion.

Eventually, with her suitcase in hand, Roxi decided to depart the reality show.

"I think it was just built up drama that became a bit unbearable," Roxi told Mamamia after her exit.

"It was a pretty toxic environment for me and I wasn't behaving in a way that I was happy with. I thought it was best for me and my mental health to get out of there."

Roxi's exit was dramatic to say the least, but it was ultimately an off-camera comment which led to her decision to leave the show.

"[Juliette] was kind of poking and prodding me for the most part," the 29-year-old explained.

"When we went into the bedroom to get away from it all, [Juliette] followed me in there and said a comment which was kind of the straw that broke the camel's back that pushed me to exit," she continued.

"I think [that comment] is probably what viewers didn't see, which was the main reason for me leaving."

While Roxi didn't share Juliette's comment that led to her departure, a source speaking to The Wash claimed: "Juliette said something like, 'We all know you sleep with everyone' and walked out. Roxi was furious."

Although Roxi didn't see Bachelor Locky Gilbert before leaving the mansion, he did contact her afterwards.

"He rang me and apologised for the situation. He asked if I wanted to come back and he could come pick me up and we could walk in [to the mansion] together but I was just like, 'My luggage is going on the plane right now. It's a bit late,'" the Brisbane woman said.

"I think I'd look like a bit of an idiot if I carried on like that and then turned up at the mansion again."

Although Roxi acknowledges that her personality clashed with Juliette on the show, she has "no idea" how their "rivalry" started.

"I think it kind of stemmed from the very first day coming into the house. She was just stirring up stuff with a couple of girls and I stuck up for one of them and after that, I pretty much had a target on my back," she recalled.

"It definitely ruined my time in the house because it got to me a lot. And you can obviously see that from the way that I carried myself in there.

"﻿I guess it took away from the experience, which is disappointing. I just wish I didn't let it get to me as much as it did. But I mean, at the end of the day, it is what it is."

Speaking to Mamamia on Thursday, fellow former contestant Nicole said that Roxi got a tough edit on the show.

"Everyone has multiple sides to them but a lot of the time you're only seeing one side of someone [on TV]," Nicole explained.

Roxi agreed for the most part, telling Mamamia that she wasn't entirely happy with the way she was portrayed on the show.

"In the beginning, I was upset because it was just predominantly me crying and I did do other things apart from that," she said.

"But towards the end, you got to see a little bit more about my personality and my quirkiness, so I was happy towards the end about what was being shown."

The 29-year-old added that watching the show back wasn't easy.

"Some bits were hard to watch. There were definitely a few months where I was like, 'Oh my god, did I really say that?'"

Unlike seasons gone by, this season of The Bachelor was entirely uprooted by the COVID-19 pandemic, leaving contestants to film from their homes.

It was an experience which Roxi surprisingly enjoyed.

"You're in the comfort of your own home. There's no stress. You're super relaxed. I probably enjoyed that more than being in the mansion," she explained.

"There was something about the mansion that just heightened my stress levels."

Of course, "love in lockdown" wasn't free from drama. During one group date, Roxi was posed with an anonymous question, asking whether she had a 'secret boyfriend'.

"I think it was Juliette stirring the pot with me to try to get me to react because of course, that's the most controversial question you can throw out on a dating show," Roxi said.

"It was uncomfortable. I tried really hard to keep my sh*t together. But after a while, I've got really slim patience. Actually, I've got no patience. So of course I reacted."

Bella Valeris and Irena Srbinovska also clashed during their time in lockdown. However, we didn't see it play out on camera until they reunited at Thursday night's cocktail party.

"[Bella and Irena's argument] kind of transpired during COVID because they had free rein to talk to Locky as much as they wanted and I guess the jealousy aspect kind of took over and it turned into a bit of a competition," Roxi recalled.

"They kind of had a bit of beef during COVID and coming back into the mansion, that's when you kind of saw it pop off."

For the most part, Roxi enjoyed her time on the reality show. But although she has "no regrets", she faced some trolling from viewers.

"But after last night's episode, I've had so much support and lots of positive messages from people respecting my decision to leave.

"I definitely don't regret anything. I probably could have handled myself a little bit better. But it was an interesting experience, and I was really grateful to be a part of it."