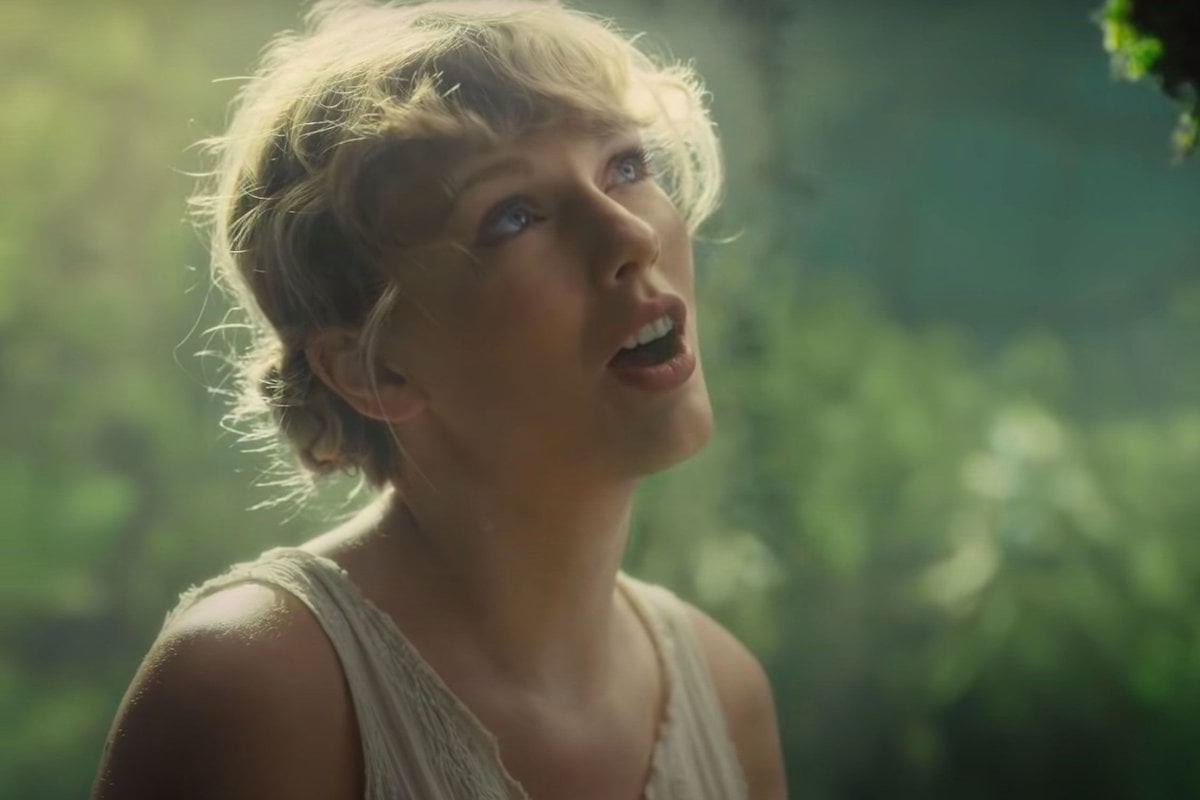 We know that Taylor Swift is a lover of Easter eggs, dotting them in every single album she drops. These work as a sneaky commentary from Swift to her fans about how she really feels about something that’s happened to her.

Some of our favourite Easter eggs so far? Her song ‘Dear John’, which was a big old emotional eff-you to her ex-boyfriend John Mayer or, you know, her entire Reputation album which called out Kanye West on his shady behaviour.

In short, she’s the queen of fighting back in the form of an insanely catchy tune.

And Folklore, the surprise album she just released mid-isolation is no different. Here we run through all the hidden meanings in Taylor Swift’s eighth studio album.

It seems the feud is far from over between Swift and the Wests. Between that infamous award show speech and the awkward airing of a private phone call, it’s fair to say there’s a large amount of beef between this A-list trio.

However, the next swing from Taylor to Kanye comes in the form of the song ‘Mad Woman’ on Swift’s latest album. While the title may indicate that Taylor is calling Kim a ‘mad woman’ for sticking with Kanye, instead Swift is first and foremost referring to herself.

With fighting talk like, "Every time you call me crazy, I get more crazy," followed by "No one likes a mad woman, you made her like that," there’s clearly still a lot of bitterness from Taylor towards Kanye.

However, Taylor does then (potentially) come for Kim Kardashian West later in the song with the following savage lyrics:

doing your dirtiest work for you,

it’s obvious that wanting me dead, has really brought you two together,

now is probably the time to get your popcorn.

Taylor then goes on to hint that Kanye may have even cheated on Kim with this next round of brutal lyrics.

The master of spin has a couple side flings,

she should be mad,

but no one likes a mad woman.

We know that Kanye is a little preoccupied running for office in the Presidential campaign (which you can read all about here), but it’ll be interesting to see if there is any response from the Kardashian camp about this Taylor track.

Taylor Swift’s boyfriend Joe Alwyn may have co-written some of the songs.

When Taylor announced on Instagram that she had been busy at work on this album, she graciously credited the people who helped her bring Folklore together. Sure, it involved her musical bestie Jack Antonoff, Bon Iver and The National’s frontman Aaron Dessner, but there was also an untagged and rather mysterious ‘William Bowery’ in the mix too.

Due to the lack of tag and literally no trace of a songwriter under that name on the internet, Swifties are now convinced that this is Joe Alwyn’s alias. Why? Well, obviously there are theories circulating...

‘William Alwyn’ is Joe Alywn’s grandfather, and he was a famous composer, conductor and music teacher. The ‘Bowery’ is supposedly the restaurant where Taylor and Joe had their first date - making it one heck of an adorable nod to their relationship.

There’s a three-way-song with entangled meanings.

Taylor Swift went majorly meta on this album, pulling not one, not two but three songs on Folklore together to make a mini trilogy within the album.

The story focuses on a love triangle between Betty, James and the other woman, and each song is from a different point of view. Here’s the breakdown:

Taylor confirmed this in a comment to a fan during her music video premiere, leading to a frenzy of confirmation tweets just like this one:

‘My Tears Ricochet’ was about a relationship from yonks ago.

During the livestream for the premiere of ‘Cardigan’ on YouTube, Swift said that ‘My Tears Ricochet’ was about "a lost romance and why young love is often fixed so permanently in our memories. Why it leaves such an incredible mark."

It was also the first song that Taylor wrote for the album, hinting that it was something she was itching to write about, to sing about, and to share.

As far as we know, Taylor’s first love was a dude named Stephen who went to her high school. He was the inspiration for the classic tune, ‘Hey, Stephen’, back when Taylor was less Easter eggy and more about plonking the guy’s name smack bang in the centre of the song title.

As it has been less than 24 hours since Folklore landed in our ear holes, we’re sure that plenty more theories and Easter eggs will crop up as Swifties dive into every single lyric on this album. But until then, you can find us running a bath, pouring a glass of Taylor’s favourite wine (pinot grigio if you didn’t know) and listening to track after track on repeat.

Reply
Upvote
Actually the third part of the story is August rather than Illicit Affair, narrated by the other woman. The song references when she told James to get in her car, just as he also recalls the same event in ‘Betty’. She also sings of him never being hers in that summer love, just as James explains the infidelity as a summer fling to Betty. The other woman knows she is just that.
A
alicia-gray 2 years ago