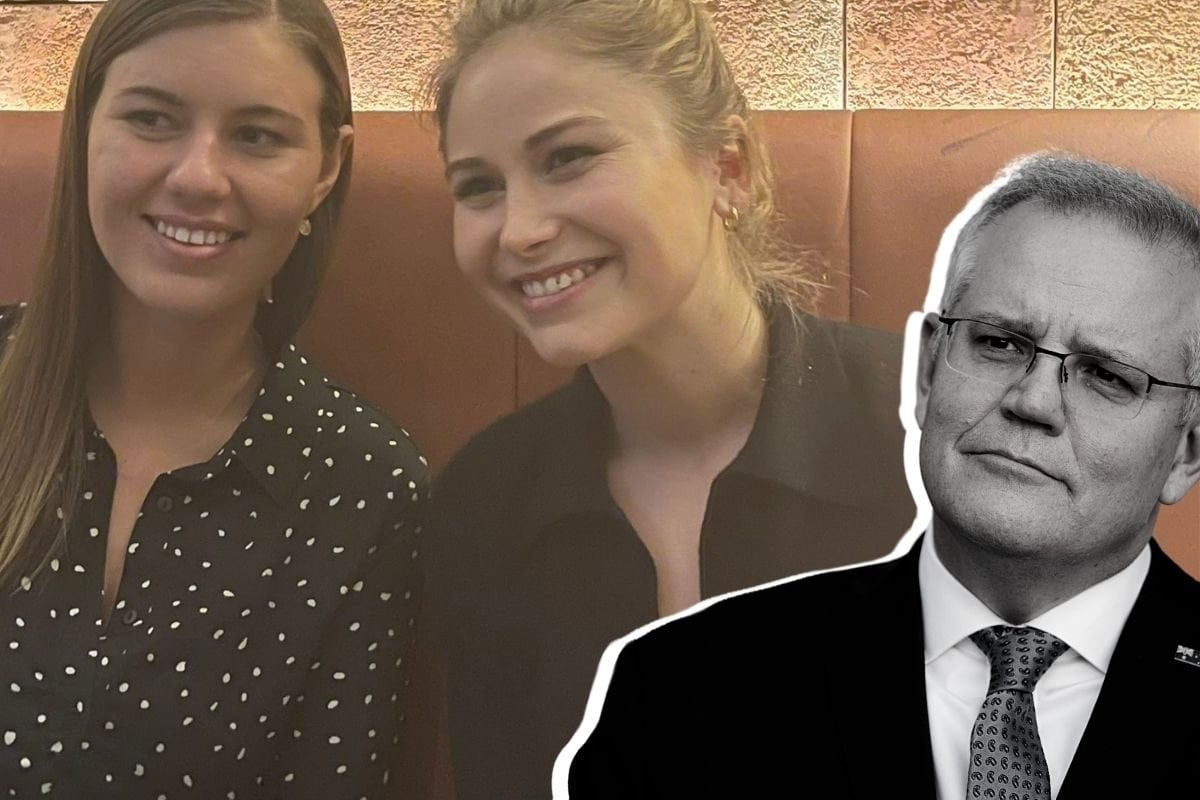 In his opening speech at the national Women's Safety Summit on Monday, Prime Minister Scott Morrison thanked the women of Australia for sending their stories of violence and abuse to him.

For trusting him with their stories.

He shared details about handwritten notes and the horrible allegations within them, providing a warning about the confronting nature of the stories before providing a few examples that had landed on his desk.

It was a lengthy speech, one that hit all the right catchphrases from a leader who has long been criticised for this inaction and missteps when it comes to talking about the topic of violence against women.

Watch: Some of the speech below. Post continues after video.

He acknowledged the problem; "Australia does have a problem."

And committed to action; "We can and must change the story."

But it's not these words of conviction that've been splashed across the headlines in the wake of his speech. Instead, the focus has been on those confronting details.

Mamamia reached out to the Prime Minister's office for confirmation he sought consent to tell those women's stories. They told us he didn't, but "all excerpts were carefully de-identified, while also preserving the impactful voices of their authors, which are now shaping the National Plan."

As Australian of the Year and abuse survivor-turned-advocate Grace Tame wrote on Twitter, "Scott has just finished his opening keynote address at the Women’s Safety Summit in which he appropriated private disclosures from survivors to leverage his own image. Gee, I bet it felt good to get that out."

Scott has just finished his opening keynote address at the Women’s Safety Summit in which he appropriated private disclosures from survivors to leverage his own image.

Gee, I bet it felt good to get that out.

That last line was an echo of the same comment Morrison said to her after she recalled her own story of abuse during her Australian of the Year Speech in January.

As Federal MP Anika Wells explained to 4BC, "if those women wrote those letters in confidence to the Prime Minister and they didn’t give express consent for those stories to be used for whatever ends the Prime Minister sought to gain with his speech this morning, then yes it wasn’t appropriate.

"The way he has set up this national summit, is that for the ordinary Australian woman, we can watch the live stream, that’s what I am doing from my office in Nundah, but there’s no actual way for Australian women to participate unless they have been specifically approved, sanctioned and roped in by the Morrison government who has been so exclusionary, even the catalyst for this, Brittany Higgins wasn’t invited.

"It wasn’t acceptable for him to cherry pick what stories he felt were worthy sharing whilst denying actual participation to the millions of Australia women who are watching on."

The whole aim of the summit is to shape policies around ending violence against women and children. The Prime Minister's speech, no doubt, had been meticulously written to show that he was a leader who cares, who is fighting for change and who understands and empathises with women's stories.

But he was off to a bad start before he'd even opened his mouth when you consider the last few months of doing and approving things that didn't at all fit the apologetic and defiant nature of his speech.

This is the same leader who admitted to not reading the evidence sent to him implicating one of his own ministers, Christian Porter, in a rape claim. A man who he declared in March "innocent under the law" despite calls for an independent inquiry to inspect a multitude of unanswered questions.

It's a government that this week appointed Lorraine Finlay as the new Human Rights Commissioner, a Perth lawyer Grace Tame told ABC Radio, "is against enthusiastic consent, and who has publicly supported the commentator who platformed the twice-convicted paedophile who abused me."

It's a summit that left Brittany Higgins off the invite list, despite the fact her bravery in coming forward with her own allegation of rape inside Parliament House, demonstrated the desperate need for one in the first place. In June, an investigation into who in the PM's office knew about her allegation was put on ice until the criminal trial against her alleged abuser is over.

As Higgins pointed out after his address on Monday, "While I respect the Prime Minister's 'ambitious spirit' for the National Women’s Security Summit 2021 - I just can’t match this Government’s actions with the platitudes and warm sentiments they are all extending today."

"On another note, I'd like to give a big thankyou to the ACT Government and the Victims of Crime Commission who kindly stepped in at the last minute to have me invited as a delegate," she added.

On another note, I’d like to give a big thank-you to the ACT Government and the Victims of Crime Commission who kindly stepped in at the last minute to have me invited as a delegate to listen in to today’s event. (2/2)

Because words and empathetic speeches are great. But actions speak much louder.

"As much as I want to be hopeful about this summit ... unfortunately, in the background, actions are still proving that they don't get it," Ms Tame told the ABC on Tuesday ahead of the second and final day of the summit.

It's a summit that came days after the government failed to pass all legislative reforms recommended by Sex Discrimination Commissioner Kate Jenkins.

The most notably missing was the "positive duty" clause that would force employers to create safe workplaces and educate staff on appropriate behaviour.

Ms Jenkins said she would not let it go, adding the positive duty exclusion was most crucial.

"Of course I want all of [the recommendations implemented] but the one that is a missed opportunity, and is central, is the positive duty in the Sex Discrimination Act," she said.

"I would just say it's not off the agenda, even though it's frustrating.

"It’s devastating to see a real opportunity for positive change be denied for all the working women in this country," Higgins said after the legislation passed without that important and central recommendation.

Mr Morrison said on Monday he wanted all women and girls to live without fear, noting federal spending on initiatives as being a "down payment" on the next national women's safety plan.

"I want their humanity, their dignity, their innate worth as a human being and the freedoms to which they're entitled to be respected," he said.

So far Grace and Brittany, as fierce advocates in this space, are not impressed by Australia's progress noting above all else a disconnect between promises and policy.

"We had our own Safety Summit tonight," Grace captioned a photo of the pair last night.

"Surrounded by countless experts, fellow survivors and a united community, I remain hopeful in the knowledge that the Safety Summit is far from the only platform for change. Our hard won advocacy predates this event and will live on beyond it. We’ll never give up the good fight," she added.

Reply
Upvote
1 upvotes
How can he be so obtuse that he thinks it okay to use these women's experiences without consent to make himself sound good? He violated them all over again and it's disgusting. If he and his party get back in at the next election, heaven help us all
M
mamamia-user-391653937 9 months ago