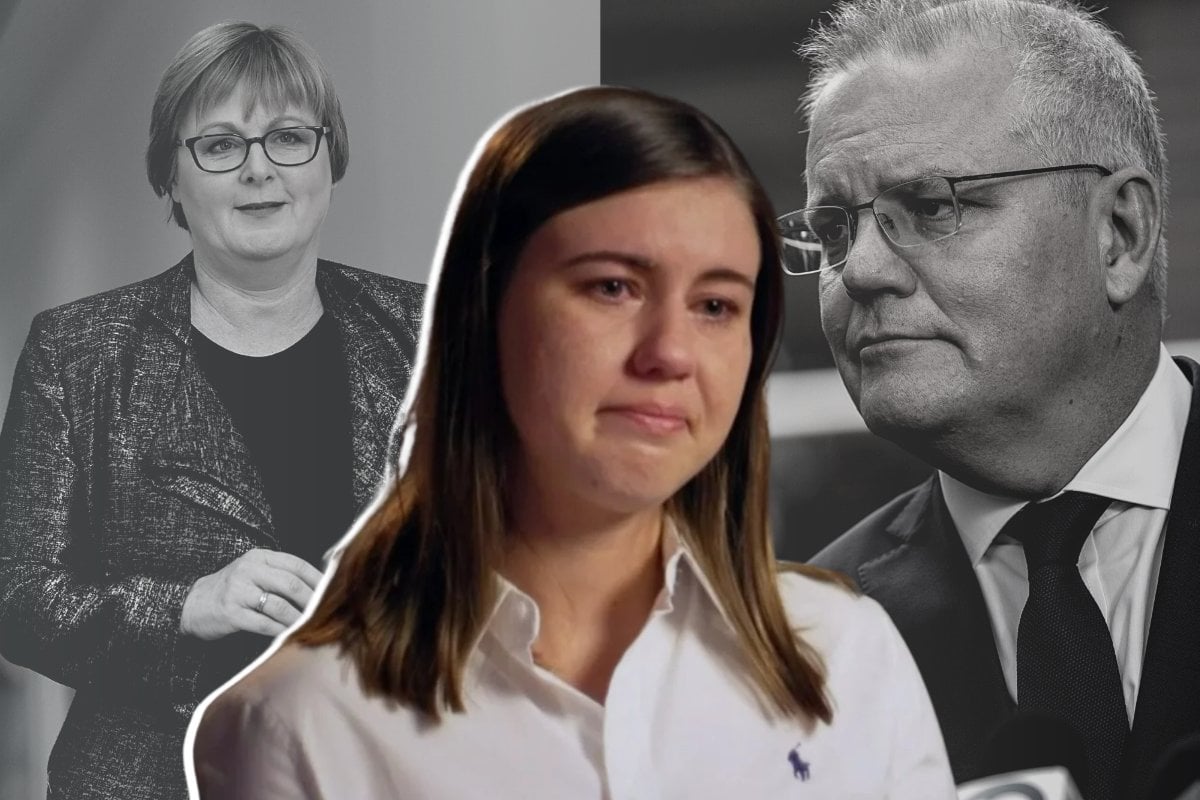 This month, all eyes are on Capital Hill, as the Federal Government grapples with allegations of a violent crime occurring within the walls of Parliament House.

Former Liberal Party staffer Brittany Higgins has publicly alleged that she was raped by a colleague in 2019 inside the ministerial office of her boss, then-Defence Industry Minister Linda Reynolds.

In the week since, three more women have come forward with allegations of assault and harassment against the same man, a former advisor who remains unidentified for legal reasons.

Here's how the situation has unfolded.

What allegedly happened to Brittany Higgins at Parliament House?

In an exclusive interview with news.com.au's Samantha Maiden published last Monday, Brittany Higgins alleged that a colleague raped her after a night out on March 23, 2019.

According to the details of the February 15 article, Higgins was just 24 at the time of the incident and only months into her "dream job" of working at Parliament House.

Higgins also alleged that she was pushed to choose between reporting to police and keeping her job, and claimed that, as her superiors scrambled to deal with the crisis, Senator Reynolds summoned her to a formal employment meeting about the incident in the same room that the alleged rape occurred.

During a follow-up interview with The Project on February 15, Higgins shared more detail of the alleged rape and how the Liberal Party allegedly responded to her allegations.

Higgins walked through her account of the events, alleging that she woke up "mid-rape" and told the man to stop. She said she was crying throughout the ordeal.

"Eventually he got up and left," explained Higgins.

But it wasn't until the next morning that Higgins said she was discovered in the office by a parliamentary security guard.

She claimed she was still in shock and tried to slip out of the building to get an Uber home.

And when she returned home she said, "I just sat in my room all day and cried".

On Wednesday, a news.com.au report claimed the security guards checked on Higgins for two reasons.

Firstly, the male staffer did not have a key to the office, so security officers from the Department of Parliamentary Services (DPS) had signed the pair into Parliament House and opened the door to Minister Reynold's office.

And secondly, CCTV showed the male staffer leave the office without Higgins, which prompted security to check the office, where they found Higgins disorientated and in a state of undress.

The news.com.au report said there were then discussions about whether the office should be cleaned before staff returned on Monday morning. A clean took place, prompting the Australian Federal Police to inquire whether there had been an attempt to "interfere with a suspected crime scene".

Because DPS allegedly did not know at the time that it was a potential sexual assault, the AFP investigation found no "criminality" was involved in the clean.

When asked if the police were contacted, Higgins was allegedly told that "internal mechanisms were already at play" — referring to the internal police force, which answers to politicians rather than the bosses at the Australian Federal Police.

Following the 'internal investigation', Higgins explained that she was asked to have an employment meeting in the very office where the alleged rape took place.

"We went into the room where it happened and it was like a whiteout in my mind. I barely remembered what was said because all I could think about was that it happened right there," Higgins shared on The Project.

Speaking in the Senate on Monday, Senator Reynolds said, "At the time of my initial meeting with the staff member, I was not aware of the details or the circumstance of the alleged incident in my office. Had I known, I would have conducted the meeting elsewhere."

However, Higgins told The Project she believes otherwise.

"She knew it was in her office," Higgins said.

"I just thought it was unfathomable that they would put me in that space again."

A spokesperson for parliament told The Project that Higgins was given a guarantee there would be no impact on her career for coming forward.

But Higgins claimed on the show that "it was made to feel like it was my problem," and that "if you can't deal with it, then you can leave".

"I could go home. They would pay me. I would essentially be employed. And I could just take leave and process what had happened."

When Higgins asked about the process of coming back to work, she said she was told: "Well, you wouldn't."

So she took a post at Senator Michaelia Cash's office in Western Australia, where she worked out of a hotel "seven days a week".

"I was pretty suicidal to be honest, at the time," she said.

Higgins has now resigned from her role, claiming that it’s the "only thing I can personally do".

The accused was reportedly sacked in the days after the incident.

Following Higgins' appearance on The Project and the subsequent reporting on her allegations, the former staffer released a statement on February 17 further discussing the handling of her case by government officials.

Brittany Higgins has just released this statement in response to the lies and secrecy that have surrounded her alleged rape for almost two years, and seriously calls out the Prime Minister for what she sees as his continued victim blaming of her.#auspol @ScottMorrisonMP pic.twitter.com/2o8ZiKRnax

Higgins explained that she had only been made aware of key details from the night of the alleged incident after going public with her story and called out Prime Minister Scott Morrison on comments made during Question Time.

During the session, Morrison had said "Brittany had made a decision that she did not wish to make a statement and register a complaint with the police," which Higgins perceived as victim-blaming.

"The continued victim-blaming rhetoric by the Prime Minister is personally very distressing to me and countless other survivors," Higgins said in her statement.

She then accused a senior staffer to the Prime Minister and her former Chief-of-Staff of allegedly refusing to provide CCTV footage from that area of Parliament House and for making her feel as though her job was on the line if she were to proceed with her case.

Higgins ended her statement with: "The Government has questions to answer for their own conduct."

On Tuesday, February 16, Prime Minister Scott Morrison publicly apologised to Brittany Higgins over the way the allegations were handled.

"We are all privileged — whether it’s members of Parliament, the people who work in our offices, indeed, those who work in the Gallery and get to do what we do in this place — it is a privilege," he told a press conference.

"And we should be able to go about that important work safely. There should not be an environment where a young woman can find herself in such a vulnerable situation. That is not OK."

Yet the Prime Minister's remarks about his personal response to the allegations also sparked significant commentary.

During the press conference, Morrison said his approach was prompted by a conversation with his wife.

"Jenny and I spoke last night," he said. "And she said to me, 'You have to think about this as a father first. What would you want to happen if it were our girls?'

"Jenny has a way of clarifying things; she always has."

Read more: Scott Morrison responded to Brittany Higgins' allegations "as a father". Why not as a human being?

Who knew what and when?

This is the question on many lips as parliament and the press probe the handling of Higgins' allegations.

Prime Minister Scott Morrison told Parliament last Tuesday that his office first heard about the claims on February 12, three days before they were made public via the media.

This is despite Higgins saying that a senior member of Morrison's staff contacted her in November 2020 to "check in on her" after similar issues were raised in a Four Corners report.

The Australian also obtained text messages that allegedly show a former adviser telling Higgins he had spoken to the Prime Minister's Office about her allegations in April 2019.

What other claims have been made against the alleged perpetrator?

In an interview with The Weekend Australian on Saturday, a second former Liberal staffer, who asked to remain anonymous, alleged that she was raped by the same man accused by Brittany Higgins.

She told the publication that the attack occurred in late 2020, after she had dinner and drinks with the former staffer.

"If [Brittany Higgins' allegations] had been properly dealt with by the government in 2019 this would not have happened to me," she told the publication.

A third woman, also unnamed, came forward on Monday with allegations that the same man sexually assaulted her in 2016.

The woman told The Australian that she was barely out of school when the former staffer bought several rounds of "double strength" vodkas and three tequila shots for her during a night out with campaign volunteers days before the federal election.

She says he offered to "look after me" and she woke up to find her button-up blouse opened and her jeans pushed down in his hotel room and him "lying on top of her".

She says she fled the room and was bleeding.

A fourth woman told the ABC that the same man "stroked her thigh" during a night out socialising with colleagues in 2017. The woman, who said his conduct was completely uninvited, has made a formal complaint to police.

Brittany Higgins will make a formal police complaint about the alleged assault on Wednesday.

"I want a comprehensive police investigation into what happened to me," she said in a statement released on Friday, "and for my perpetrator to face the full force of the law".

As for the government response, three inquiries have been slated.

But in a scathing address to the Senate on Monday, Labor senator Penny Wong criticised the lack of accountability within the Morrison Government and described the reviews as "whitewash investigations that can be controlled".

"Mr Morrison is arguably the most powerful person in the land," she said, "He sets standards that form cultural expectations. His actions and inactions shape the culture.

"He said he was angry about being left in the dark, but there have been no consequences for those he claims left him in the dark."

This article was originally published on February 15 and has been updated.

J
jennynot a year ago

Reply
Upvote
Anyone else wondering why it took Jenny to clarify this issue for Scott Morrison? Shouldn't he know this stuff? Will Jenny be training up all the other Liberal staffers who don't have daughters or a wife at home? Come on.  Some serious awareness raising needed for Liberal party.  They have a women problem.
B
bea a year ago