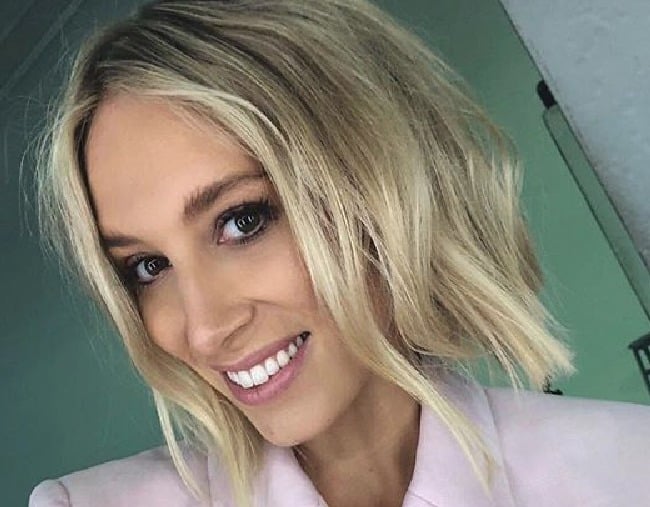 1. Phoebe Burgess’ conspicuous absence from Stakes Day in the wake of her husband’s sexting scandal.

Phoebe Burgess pulled the plug on her appearance at Colgate Optic White Stakes Day on Saturday, after it was revealed her husband, NRL player Sam Burgess, was involved in sending unsolicited nude photos to a woman in May.

Last week, the recipient of the photos claimed the Rabbitohs had not investigated the incident following her initial email, in which she said she felt ‘violated and uncomfortable’, other than an acknowledgement of her complaint.

On Friday night, The Daily Telegraph revealed the naked photos were sent to a 23-year-old woman without consent from Sam’s Facebook account during a video call.

It has not been confirmed whether he was one of the men in the footage, which showed one player exposing his backside, and another his genitals.

Sam’s wife Phoebe is currently expecting her second child, and a friend told The Sunday Telegraph she chose to skip Stakes Day because “the stress would have been all too much”.

According to The Sunday Telegraph, Phoebe didn’t attend Sam’s semi-final match at ANZ Stadium on Saturday night, either.

Phoebe and Sam were married in 2015 and have a nineteen-month old daughter, Poppy Alice.

There’s a story behind the daring men’s suit Blake Lively wore to the premiere of her latest film with Anna Kendrick, A Simple Favour.

As an outfit, it’s a classic amazing-Blake-Lively-pant-suit-moment except the actress didn’t realise her shirt would photograph as see-through, and while walking down the red carpet with hundreds of cameras flashing at her, it was all she could think about.

So much so that it caused a little misunderstanding between her and an unnamed man.

She shared her hilarious story on The Tonight Show starring Jimmy Fallon.

"I was on the red carpet and this guy goes 'Blake! Your teets are amazing!'" she said surprised, alarmed and mildly offended.

"And I was like, are we saying that? Have you been on Google the past year? This is not OK."

"And then he said 'And your husband's tweets are even better!'" she shared.

It was then she realised her mistake.

"Oh tweets! My tweets are amazing!," she said.

See? Slip ups, they happen to everyone.

3. Why people are convinced The Wiggles' Emma and Lachy are getting back together.

There may be hope that true love does, indeed, still exist.

We were devastated when Emma and Lachy announced they were ending their marriage last month.

But, spies who spotted them grabbing an ice cream in Townsville last Friday, think it could be a sign they're getting back together.

And we think they might be onto something (do we just 'step out for an ice cream' with our exes? Hmm...).

As reported by the Daily Telegraph , they appeared "anything but a couple getting a divorce" during their outing.

While friends of the couple say they have maintained a "wonderful friendship" despite their split, and claim their top priority "is the tour and giving their fans the best show possible" we like the idea that they're rekindling their romance.

Former Australian cricket captain, Steve Smith, has tied the knot with his fiancé, Dani Willis in a beautiful ceremony.

Six months after the infamous cricket ball tampering scandal, which saw Smith and team mates, Cameron Bancroft and vice-captain David Warner, stripped of their national contracts, Smith married Willis at the popular Bendooley Estate in Berrima - a historic village in the Southern Highlands of NSW.

Today I got to Marry my best friend. What an absolutely incredible day. @dani_willis looked unbelievably beautiful

The couple met in 2011 and got engaged in June 2017 at the Top Of The Rock at Rockefeller Centre in New York.

Sharing the personal moment with fans, Smith shared a touching photo of him and Willis in her J'Aton Couture gown, on his Instagram.

"Today I got to marry my best friend. What an absolutely incredible day. @dani_willis looked unbelievably beautiful," he wrote in the caption.

You can take a squiz at these exquisite wedding snaps here:

5. Blake Coleman’s highly problematic account of his relationship with The Bachelor’s Brooke.

Bachelor in Paradise's Blake Coleman would like to add his own two cents over the whole 'Brooke's secret revelation that she once dated women' confession.

You see, four years ago Blake and Brooke used to date, and when they broke up, Brooke started dating women.

Therefore, Blake felt like he needed to share his side of her decision to date other women.

And it was just a couple of levels of unnecessary.

Sharing his thoughts on his Instagram stories after Wednesday night's episode, he wrote "Is now the right time to tell you that I was dating Brooke during the exact moment she decided to turn full lesbian?"

"I literally have no hope with women.

"Just for the record she is a dope chick and a really good human. But guys, you have not felt pain and confusion until a girl leaves you for a girl.”

You can read his response to the controversy over his problematic comments right over here.

Blake’s comments were so unnecessary, so we’re talking about them in two articles here today.

Hopefully tomorrow there'll be an article about how he's finally stopped doing articles.