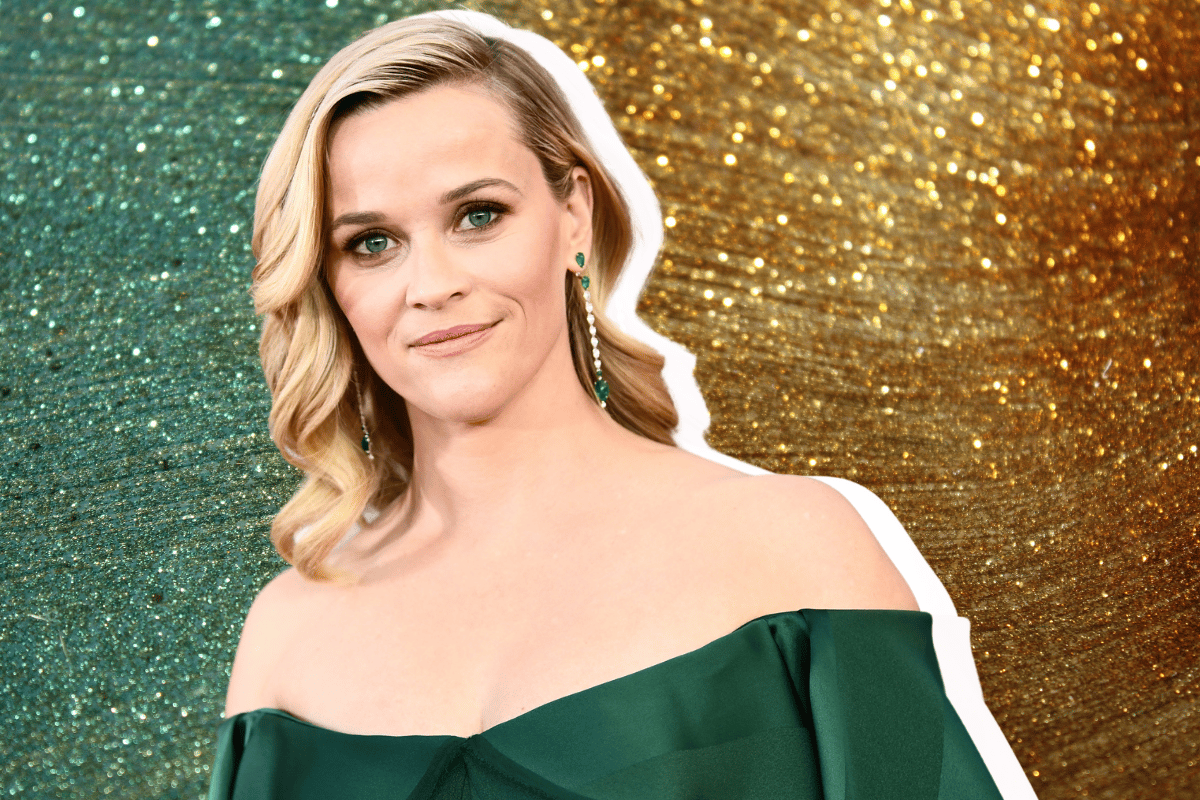 In 2012, Oscar-winning actress Reese Witherspoon was flicking through the New Yorker when she found herself name-checked in an article. Not unusual given she'd been one of Hollywood's biggest stars since the late '90s.

Only, in this article, the author was describing her - along with several other actors - as someone who was 'a big star 10 years ago'.

For Witherspoon, who was 36 at the time, it was a pivotal moment.

Witherspoon found success as a teenager, starring in The Man in the Moon aged just 14, then shot to superstardom with her roles in Cruel Intentions and Legally Blonde in her early and mid-20s. At 29, she won an Oscar, playing June Carter Cash in Walk The Line alongside Joaquin Phoenix.

But then... things stalled. After receiving such huge recognition, Witherspoon struggled to plot her next move.

The problem was, roles, like Carter Cash, were scarce in Hollywood - and Witherspoon was deeply frustrated that nobody was writing complex and interesting female protagonists.

She'd seen far too many "dreadful and offensive" scripts with a lazily written female leads she didn't want to play.

While her career was floundering, her seven-year marriage to actor Ryan Phillippe collapsed.

And in the blink of an eye, she was being described as 'washed up'.

But it also gave her the push she needed to reimagine her career.

For Witherspoon, it made sense.

"I always knew from the time I was seven that I wanted to be a storyteller or an actor or a singer," Witherspoon told Vanity Fair last year. "Or a writer. I always wanted to be a writer. I think that’s why I’m in awe of writers because I’ve tried to sit down and do it. I have ideas for stories all the time. I could never figure out how things ended. I always have ideas about how things begin but I never know how they end."

But she didn't need to write. An avid reader, devouring three to four books a week, the source material was right at her fingertips. She already knew the types of female driven stories that kept her turning pages, that would surely translate to the big screen.

And so, rather than try to work in the confines of someone else's studio, following someone else's outdated rules, she co-founded her own production company (with Australian producer Bruna Papandrea), then called Pacific Standard.

She quickly acquired the rights to then unpublished Gone Girl by Gillian Flynn. With its messy, unconventional female protagonist and its gasp-out-loud twist, it was a story she knew she had to bring to the big screen.

Quickly, Witherspoon optioned Cheryl Strayed's 2012 memoir Wild. This time, she played the lead, casting Laura Dern as her mother. Their raw and powerful performances earned them both Academy Award nominations.

But it was her third adaptation - Liane Moriarty's Big Little Lies - executive produced with costar Nicole Kidman, that really made Hollywood sit up and take her seriously as a filmmaker.

On the success of the HBO miniseries (eight Emmy wins for its first season), Witherspoon relaunched her company, calling it Hello Sunshine and labelling it as a "storytelling brand".

"The idea is to put women at the centre of the story," she told Vogue in 2019. "I was sick of making movies where I was the only female lead on the set.

"I was sick of seeing scripts where there was one female role, badly written, and yet every actress in town wanted the part because there was nothing else."

"It’s nice to highlight authors who don’t have a track record of selling a lot of books," she told Vanity Fair. "To watch what happens to them is extraordinary, and really emotional for us."

The club currently has 1.8 million followers on Instagram. A recommendation from Witherspoon - even if she's not optioning - is nothing short of life-changing. (The Alice Network by Kate Quinn became a New York Times bestseller six months after Witherspoon selected it for her book club.)

At this point, it feels like everything Witherspoon touches (reads, produces, stars in) turns to gold. Her 2019 TV hit, The Morning Show, which she produced and starred in alongside Jennifer Aniston, for Apple+ will soon be back for a much-anticipated second season.

Another one of her brilliant book club adaptations, Little Fires Everywhere, produced alongside Kerry Washington for Hulu, received five Emmy nominations in 2020 and is compulsively watchable.

Currently, Witherspoon has shows either airing or in development at almost all of the major streaming services: Netflix, Hulu, Amazon, Apple TV Plus, and even Quibi.

So flattered that @adweek chose myself & @hellosunshine for this incredible honor.✨ It was a real pleasure to walk down memory lane with @jasonmlynch tracking the evolution of my producing career from 2001 to now. 🕰 From great wins to hitting frustrating obstacles, learning to pivot into creativity and find new doors to open! Every day I am inspired by the remarkable, creative, and endlessly ambitious team at @hellosunshine for driving our mission to change storytelling forward, creating female partnerships and being on the forefront of the ever-changing media landscape. I hope more young people feel inspired to look at the way they can change established systems... from little changes every day to big bold moves that shake things up! 💥 📷: @johnrussophoto

When Witherspoon first heard that Nicole Kidman was also trying to acquire the rights to Big Little Lies, rather than try to outbid her, she reached out, suggesting they join forces.

"That's what I love about Reese," HBO’s chairman and CEO, Richard Plepler told Fast Company. "There's room for everyone at the table."

And the other seats at that particular table were reserved for Laura Dern, Shailene Woodley, and Zoe Kravitz.

Kidman and Dern are both 53, Witherspoon now 44 - and they're playing sharply drawn, layered female characters, exploring motherhood, friendship, infidelity and domestic violence. Meryl Streep who is 70 (and in fairness, might be one of the only women in Hollywood immune to ageism in the industry) joined the tribe for the second season.

As Nicole Kidman said in her acceptance speech when she picked up a Screen Actors Guild Award for her performance in the show, actresses over 40 are proving they're "potent, powerful, and viable."

"How wonderful it is that our careers today can go beyond 40 years old," she said, with genuine emotion. "Because 20 years ago, we were pretty washed up by this stage in our lives, so that's not the case now."

There is no doubt that Witherspoon's trailblazing efforts are behind this shift.

As Laura Dern put it to Vanity Fair: "Reese is a miracle. She is the gold standard of what it means to be a champion. She has always been a champion of art, and other artists, as well as friends and family. But discovering how she will never stop until other women are honoured for their voices and their skills with not only a seat at the table, but paid and paid well for it, is a rare marvel."

And that really sums up what's most impressive about Witherspoon. She didn't just reimagine her own career. She reimagined Hollywood - and its output - for all women.

She quite literally flipped the script and wrote us all a very different story.

Reply
Upvote
1 upvotes
I love that she and Nicole teamed up rather than competing against each other.
M
mamamia-user-482898552 2 years ago

Reply
Upvote
1 upvotes
It's interesting that Witherspoon has focussed on creating meaningful roles for women now, given her earlier success with the Legally Blonde franchise, which essentially championed the idea of "females achieve success through being pretty and utterly vacuous".
N
ness 2 years ago

Reply
Upvote
5 upvotes
@mamamia-user-482898552 I really disagree. On the surface that's what the movie looks like it is about, but in reality it's about female friendship and building one another up, it's standing up for yourself, Her character is smart and switched on and kind.
A
anastasia beaverhausen 2 years ago

Reply
Upvote
5 upvotes
@mamamia-user-482898552 If that's what you took from the movie then you didn't understand it at all.
E
elishatraill 2 years ago

Reply
Upvote
1 upvotes
@mamamia-user-482898552 perhaps Witherspoon is driven to work in the way she does now because of dissatisfaction with her earlier options? Although, full disclosure, I love Legally Blonde, and think it was as much about Elle reinventing herself (and her perception of herself and her capabilities) as it was about superficiality.
M
mamamia-user-482898552 2 years ago