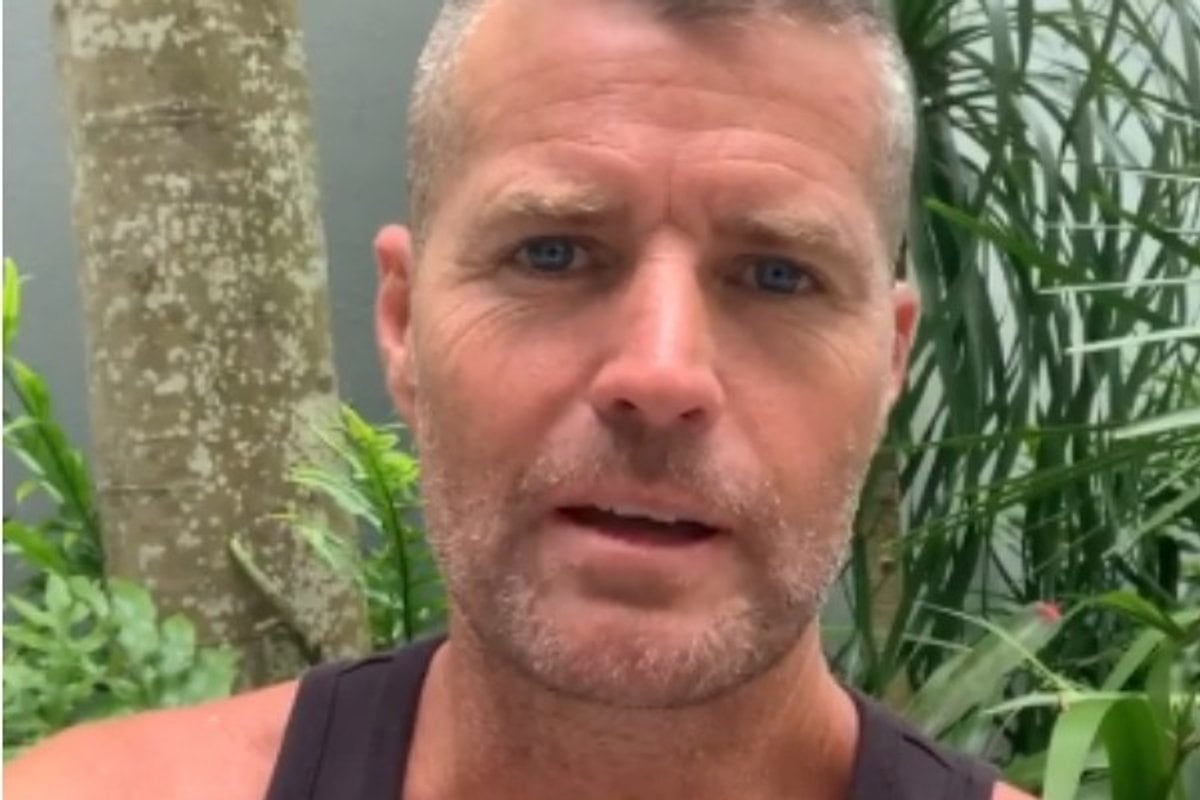 The Pete Evans' of our world are ditching mainstream social media and instead going on the hunt for something that won't "censor them."

The announcement was a reaction to a mass exodus of Evans' business deals and partnerships after he pushed his controversial, and often dangerous opinions, one step too far.

He posted a cartoon featuring a symbol appropriated by the Nazis. You can read about that here. And was subsequently dumped by his cook book publisher and removed from the cast of the upcoming season of I'm A Celebrity... Get Me Out Of Here!

It wasn't the first time he'd been condemned for his views on social media. He's previously claimed the coronavirus pandemic is a scam, told his followers the Black Lives Matter protests are an extreme left conspiracy, thinks sunscreen is full of "poisonous chemicals," believes a paleo diet can cure asthma, cancer and autism, and is a prominent anti-vaxxer. To name just a few.

Sidenote: Here's how to talk to anti-vaxxers. Post continues after video.

So when Evans announced he was leaving Facebook, there were celebrations. Less visibility by the masses means less influence over reasonable, decent people who probably stumbled across the celebrity chef's misinformation while on the hunt for a new salad recipe. No airtime on prime-time television means no more projecting of said views to an even bigger audience. It felt like a victory for fact, the fight against racial hatred, and science.

But those celebrations might have been premature. Because by actively joining an echo chamber instead, Evans will only grow more powerful in his delusion.

Parler, a Twitter-like social media app is fast becoming a haven for right wing conservatives with views as dangerous, if not more dangerous, than the former My Kitchen Rules judge.

Parler does not remove content based on politics or ideology, and is "dedicated to free speech".

While it might not have intended to become a cesspit of conspiracy theories, myths and misinformation, by offering a service where users can post without fear of being de-platformed, it's become just that.

In November alone the app grew from 4.5 million users to eight million, fuelled mostly by Donald Trump supporters sick of the "lamestream media" censoring their president's tweets about the "stolen" US election because of a lack of evidence to support their claims. 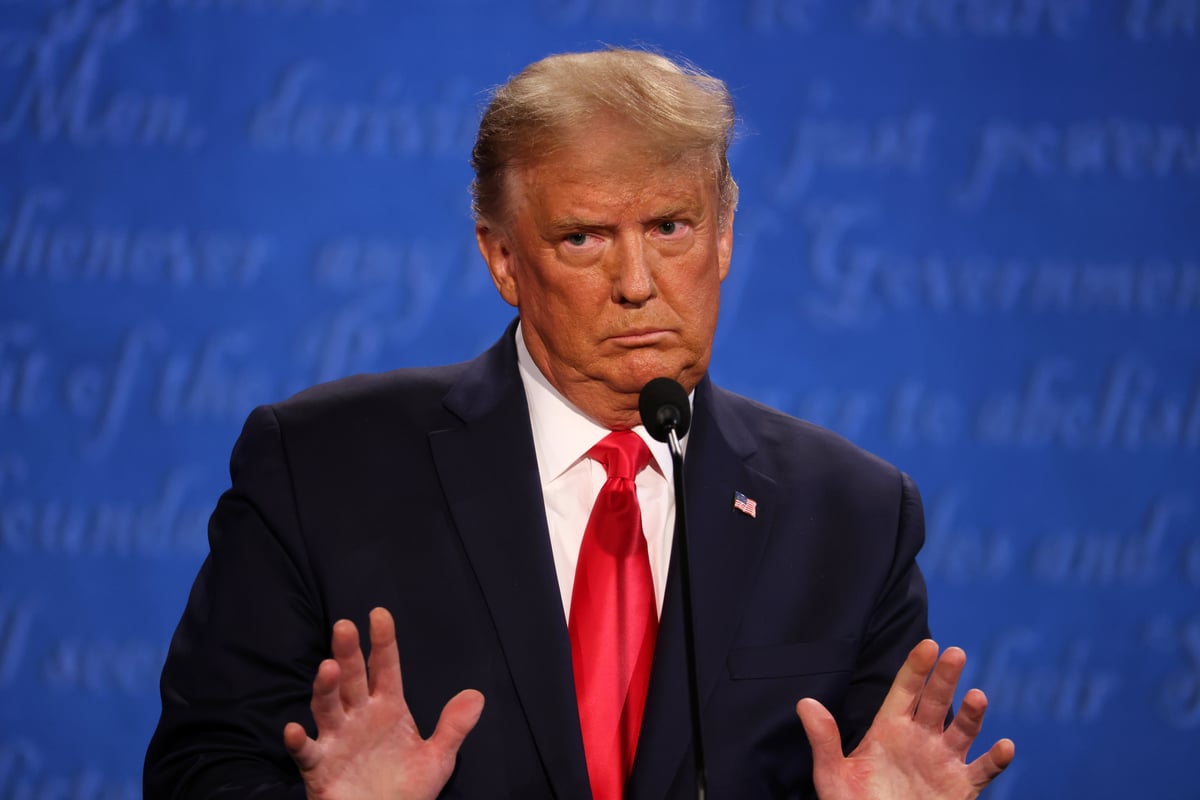 Since the November 3 US election, Trump supporters have flocked to Parler. Image: Getty.

While Trump isn't on Parler himself just yet, his campaign has an account. As does his personal lawyer Rudy Giuliani and White House press secretary Kayleigh McEnany. There, they don't have to show evidence for their outlandish claims under the guise of sharing their 'opinion'.

It has also become a home for Milo Yiannopoulos, a far right commentator who has ridiculed Islam, feminism, social justice and political correctness. And Alex Jones, a far right radio host and conspiracy theorist who believes 9/11 was an "inside job" and who earlier this year was caught selling products that he claimed "cured" coronavirus.

On Parler things like QAnon, a far-right conspiracy theory alleging that a cabal of Satan-worshipping pedophiles is running a global child sex-trafficking ring, can spread and fester completely unchecked.

We've long been told censorship rarely stops hateful speech, but instead sends it underground. That seems to be what we're witnessing with Parler.

In 2020 social media giants are under increasing pressure to regulate what is shared on their platforms.

Parler has been promoting itself as the antidote to those who feel oppressed by rules on what they are allowed to say. 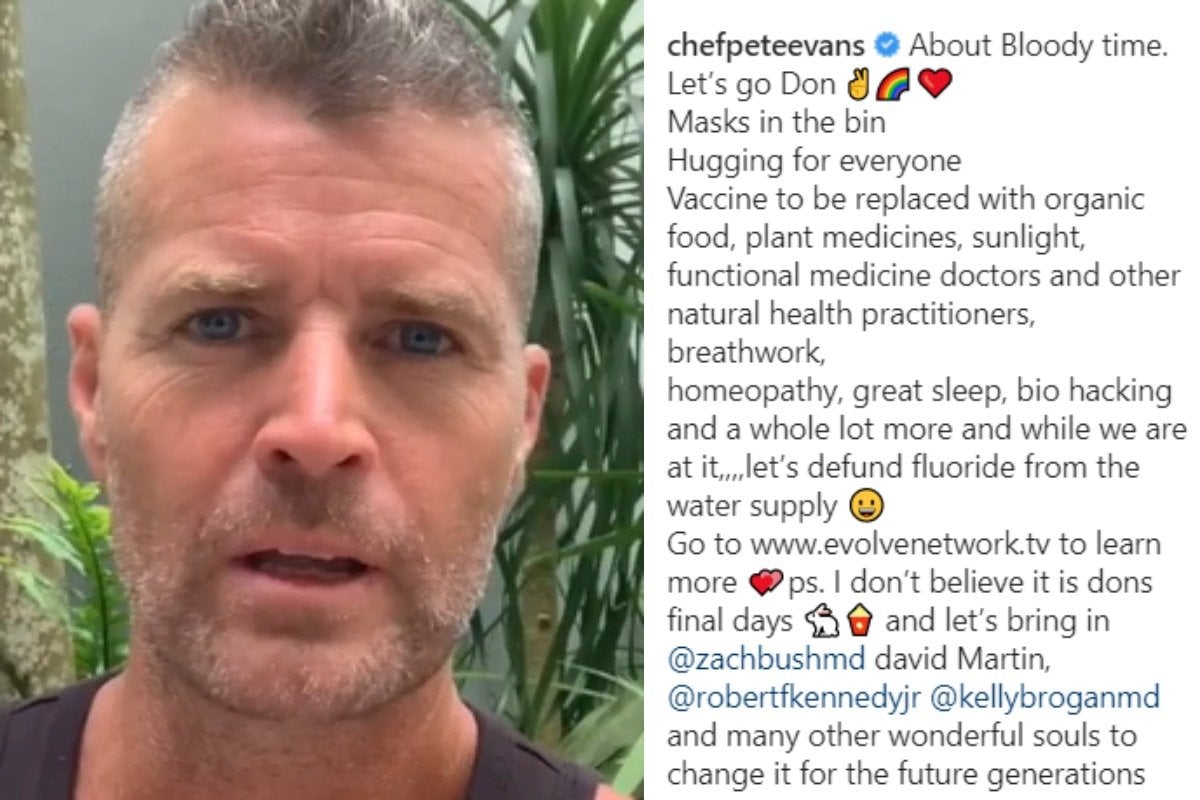 Evans has been sharing increasingly hateful and incorrect information on his social media accounts. Image: Instagram.

As Audrey Courty, a PhD candidate at Griffith University specialising in digital media and political communication told Mamamia's news podcast The Quicky, "I think the scale of the problem is so huge now even if you have unlimited resources I don't think you can tackle the problem simply through de-platforming and misinformation labels.

"There's a much more fundamental problem here that we're facing. For the past four or five years we've been disillusioning the idea of fact. We don't even agree on what's real and what isn't anymore. So we're actually experiencing an existential crisis here that I don't think simply moderating content on platforms is going to help."

Courty believes it has taken too long for legislation to catch up with social media, which in turn has left us with "tech guys - predominately white middle-aged men - making the calls" about what we can and cannot consume. And in recent years, an attempt by platforms like Facebook to 'show users more of what they want to see' has allowed conspiracy theories and misinformation to infect vulnerable users like never before.

"My personal opinion is that there should be an external body in each country that deals with these sorts of decisions and addressing these big questions," says Courty.

She's right of course. Individual countries stepping in with proper rules and regulations for our conduct online is long overdue.

In the meantime, conspiracy theories and hate speech is spreading at an alarming rate. And even as the perpetrators are increasingly kicked off the platforms we recognise, echo-chambers like Parler are providing a safe space for them to gain strength.

And now, Evans is amongst them.

Pulled from shelves and quitting Facebook: How Pete Evans' brand fell apart in one week.

Everyone knows a Pete Evans.

An 'energy machine' to treat COVID-19, and 6 other false health claims made by Pete Evans.

Reply
Upvote
We should be alarmed at our part to play in why sites like Parler are thriving. It tells us that it is our way or the highway in terms of media reporting. That isn't a media system rather, censorship. I am no fan of Trump but I do agree with Evans preventative approach to health, unlike our current medicate first, find the cause later version. That isn't a health system. 'The Social Dilemma' shows us why our supposed morally superior version of media is dangerous also. We should all keep open minds and read everything, rather than be told what to think.
james b 2 months ago

Reply
Upvote
3 upvotes
Why is it that the 'left' are always so concerned about controlling what everyone else sees, hears and thinks?
kelly 2 months ago

Reply
Upvote
2 upvotes
@james b  Lol ask ‘she who must be obeyed’ that.
laura__palmer 2 months ago