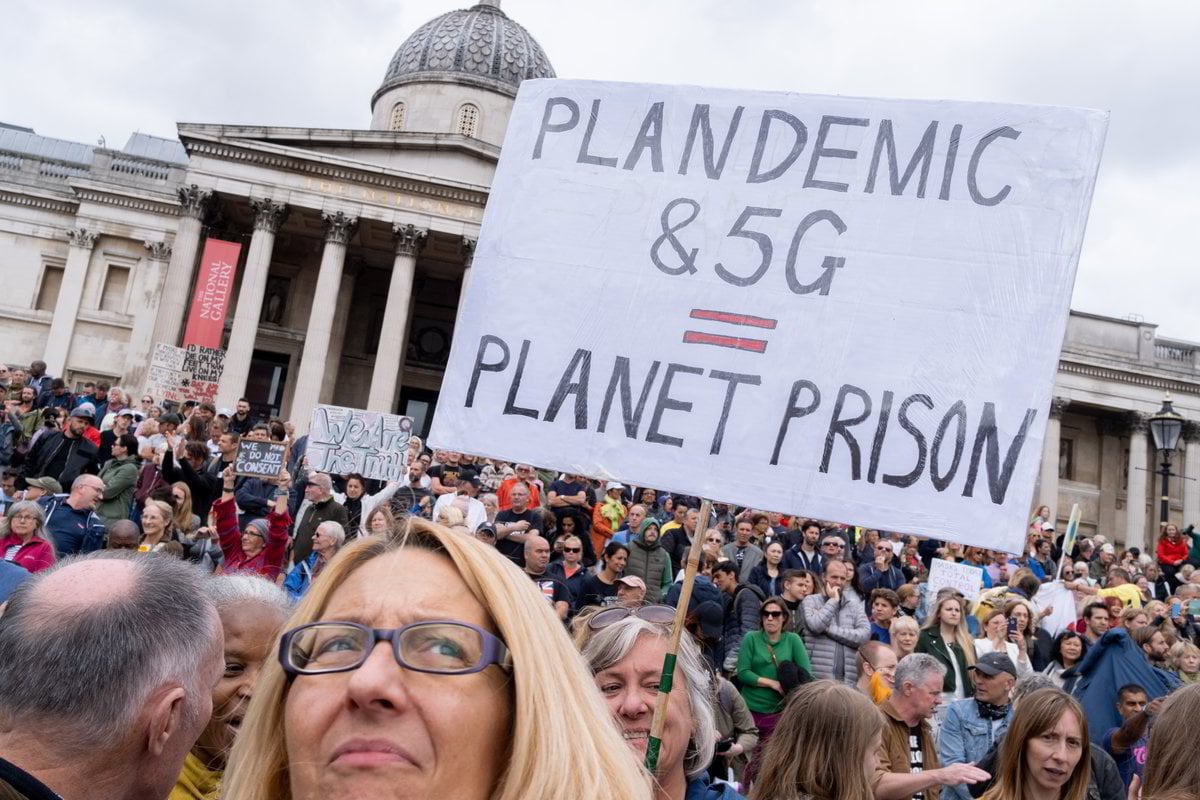 As the world fights the pandemic, we’re also grappling with an “infodemic”.

At the time of publication, there has been over 27 million cases of the coronavirus worldwide and nearly 900,000 deaths. Yet, there are portions of the population who question whether the pandemic is even real.

In late March, when the world was frantically reconciling with the early stages of the once-in-a-century public health crisis, the Director-General of the World Health Organisation Tedros Adhanom Ghebreyesus referred to the “infodemic” to explain how fake news “spreads faster and more easily than this virus.”

Whilst conspiracy theorists have largely become an inevitable part of any major event, you can’t leave them to go unquestioned.  Even the leader of the free world, President Donald Trump, has disseminated false information, including suggesting the injection of disinfectant might cure coronavirus, amongst other bizarre claims.

Here are four of the biggest conspiracy theories about coronavirus. And why they're bullshit.

In May, filmmaker Mikki Willis published a 26 minute video titled ‘Plandemic: The Hidden Agenda Behind COVID-19’ which claimed the world’s elites - Bill Gates chief among them - were leveraging coronavirus to gain profit and power.

Within a week of being published on Facebook, Youtube and Vimeo, it had attracted over eight million views.

The video championed Judy Mikovits, who was fired from her job as the head of a research institute and whose research paper on chronic fatigue syndrome was discredited. In the film, Mikovits asserts that those who claim to be protecting the global population are instead plotting to gain political control by enforcing globally mandated vaccinations.

"The game is to prevent the therapies until everyone is infected and push the vaccine, knowing that the flu vaccines increase the odds by 36 per cent of getting COVID-19," she states in the documentary.

There is no evidence to suggest that the flu vaccine increases your chances of getting the coronavirus.

Mikovits' claim completely misrepresents the findings of a study by the US Department of Defence in 2017, which looked into whether the flu vaccine could increase the chances of contracting other viruses. The study ultimately found that there was "little to no evidence supporting the association of virus interference and influenza vaccination".

The study was also conducted before the COVID-19 pandemic, meaning any claims linking COVID-19 to the study are entirely false and unfounded.

Watch: Here's how to have a conversation with an anti-vaxxer. Post continues below.

The film pedaled so much questionable information that Facebook, YouTube and Vimeo all removed it from their sites.

The coronavirus pandemic doesn't have a clear advantage for the government. COVID-19 has placed us in the worst economic recession since The Great Depression.

By closing down our economy and asking us to stay at home to stop the spread, the government has lost money. The Morrison government is now $850 billion in debt.

Also, one of the major pieces of evidence being used to prove this theory is the claim that hospital wait rooms are apparently "empty," and therefore the number of deaths and infections are being deliberately falsified to scare us into submission.

However, this is to be expected in the middle of a pandemic, GP Dr Brad McKay previously told Mamamia.

"Even if you’re recording in a hospital foyer, I'd expect it to be empty. All the action is happening in the Emergency Department and in the Intensive Care Unit, where medical staff limit access to the public because of patient privacy, confidentiality, and infection control."

Thousands of people believe governments are inflating death rates of coronavirus to false levels. In fact, even Donald Trump tweeted this conspiracy theory, before it was removed by the social media publication for spreading misinformation.

﻿﻿This theory recently received widespread attention thanks to an update from the US Centers for Disease Control and Prevention (CDC).

According to a conspiracy theorist who posted to Facebook in late August, the CDC had “quietly updated the COVID number to admit that only 6 percent [of people] actually died from COVID”.

However, this completely misconstrued the findings of CDC. What they actually found was that for six per cent of deaths, COVID-19 “was the only cause mentioned” on the death certificate. For the other deaths, there were “additional conditions or causes per death.”

This simply confirms what is well-known and well-reported about coronavirus. That is, that people of an older age or with pre-existing underlying medical conditions are at increased risk of bad outcomes with coronavirus infections, as pointed out by the CDC themselves.

﻿﻿As Associated Press points out, it’s actually rare “for people not to have multiple medical issues at death.”

In May, the SBS reported that one in eight Australians believe “believe 5G is spreading coronavirus”.

Interest in 5G in Australia seems to have initially spiked from a WhatsApp voice note, which claims self isolation is a ploy to install 5G towers.

Those who disseminate the conspiracy theory tend to reference the fact that Wuhan happens to be one of the first places to trial 5G (alongside the Chinese centres of Beijing, Shanghai and Guangzhou). Of course, Wuhan also happens to be where COVID-19 originated back in December 2019. 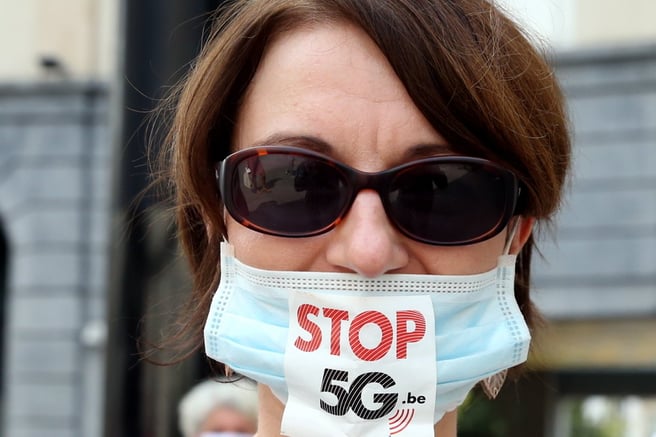 People have been protesting the implementation of 5G around the world. Image: Getty.

But South Korea was in fact the first country to commercially launch 5G - and their number of coronavirus cases has been overtaken by over 70 countries, including Iran, where there is no 5G at all. Similarly, Sweden has no commercial 5G network and their cases have reached over 85,000 with nearly 6,000 deaths, which is significantly lower than South Korea's case numbers.

Also, the World Health Organisation has said this: “A large number of studies have been performed over the last two decades to assess whether mobile phones pose a potential health risk. To date, no adverse health effects have been established as being caused by mobile phone use.”

Speaking about 5G specifically, WHO added: "Provided that the overall exposure remains below international guidelines, no consequences for public health are anticipated".

‘The pandemic is a plot to insert microchips into us.’

There are claims that billionaire Bill Gates has an evil plan to use mass vaccinations to implant microchips into people to track our movements.

The claims started when Gates announced in February 2020, that his foundation donated $100 million to help fight COVID-19. 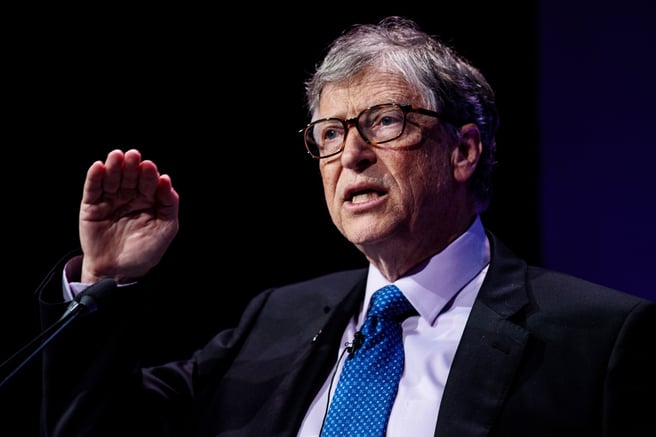 Many claim the microchip will be inside the syringe itself.

"Microchips are small, but still about the size of a grain of rice using current technology. Vaccines are injected using small needles, and a microchip just isn’t going to fit through," GP Dr Brad McKay previously told Mamamia.

"A typical injecting needle used for immunisations is a 24 Gauge. This needle has an inner diameter of 0.311mm where fluid easily passes through, but a solid object with a diameter of 2mm will be more than six times larger than the hole it’s trying to get through."

As for Bill Gates’ alleged microchip plan, it’s been repeatedly debunked by both Reuters and Politifact.

Indeed, coronavirus has seen a surge of misinformation swallow up niche pockets of social media as groups of people aim to undermine the public trust placed in health officials during the global pandemic.

Whilst debate and questioning of the world’s governments is a feature of a healthy democracy, it can also cross a line of being outrageously dangerous.

Reply
Upvote
2 upvotes
The microchip one is my personal favourite. I saw a tweet the other day which said "Bill Gates doesn't need to inject you with a microchip. Steve Jobs already sold you one for $1000, and you love it".
L
laura__palmer a year ago

Reply
Upvote
2 upvotes
@rush For some people it's that they are worried about the mark of the beast. When I was a wee one and in the church, it was a popular theory that the mircochip would be how the mark of the beast would be forced upon us. Which just makes it that bit more crazy.
News
General
Opinion
True Crime
Politics
Sport
Explainer
Entertainment
Celebrity
Reality TV
Movies
TV
Books
Rogue
Royal
Lifestyle
Beauty
Fashion
Weddings
Home
Wellness
Health
Fitness
Travel
Food
Parents
Before The Bump
Pregnancy
Baby
Kids
Teens
School
Parent Opinion
Work & Money
Money
Finance
Career
Lady Startup
Relationships
Sex
Dating
Separation
Friendship
Family
Real Life
Couples