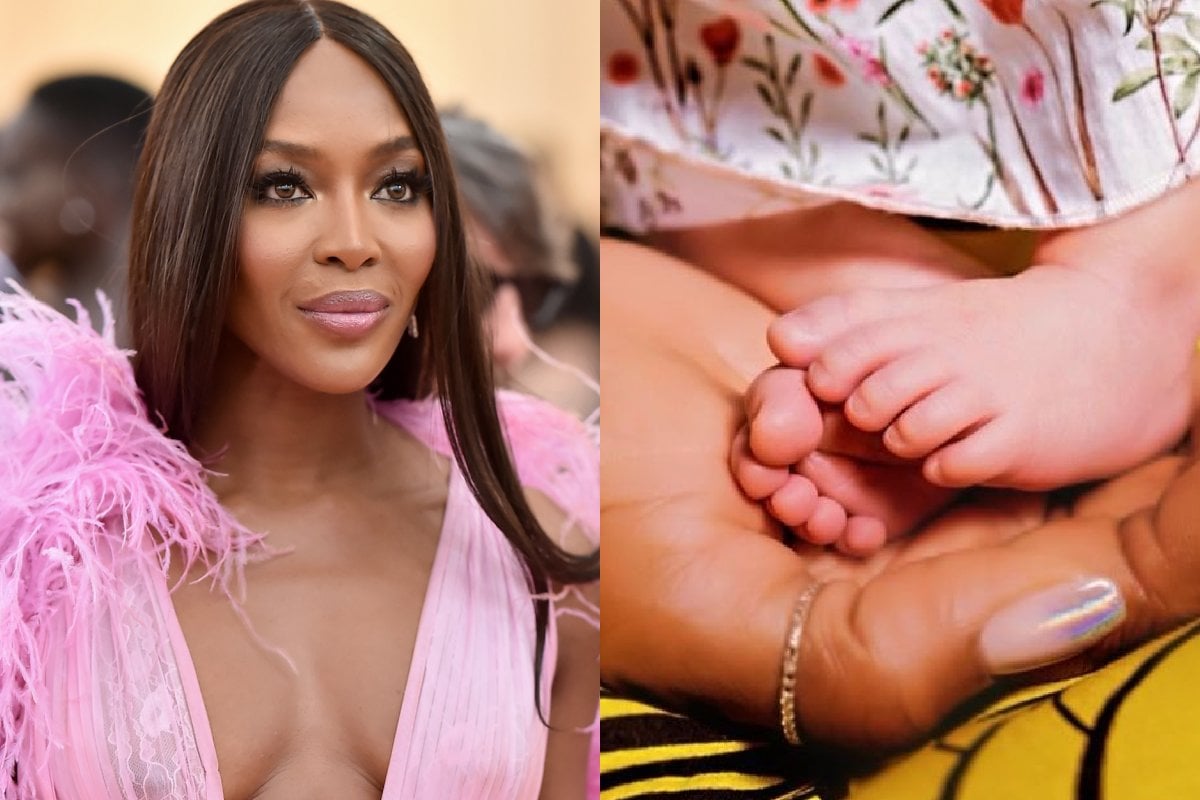 American rapper and former rumoured boyfriend Sean 'Diddy' Combs once said, "There is no debate: Naomi Campbell is the world’s greatest supermodel".

With her instantly recognisable, striking features, many would agree.

But while the now 50-year-old has graced the cover of almost every high-fashion magazine and walked the top designer's runways countless times, she has rarely spoken about her private life.

Announcing the birth of her daughter on Instagram on Tuesday, Campbell kept the details of the birth and the baby's name a secret. She also made no reference to the child's father.

"A beautiful little blessing has chosen me to be her mother," she wrote. "So honoured to have this gentle soul in my life there are no words to describe the lifelong bond that I now share with you my angel. There is no greater love."

Campbell's mum, Valerie, also shared the same photo and captioned it: "I’m beyond thrilled as I’ve waited a long time to be grandmother."

It's unknown whether Campbell is currently in a relationship.

Here's what we do know about Naomi Campbell's very private life.

Naomi Campbell was born in South London in 1970, and for the most part, raised by her Chinese-Jamaican grandmother Ruby. During her childhood, her single mum Valerie travelled across Europe performing as a professional dancer.

"I do feel that I abandoned her," Valerie told Oprah Winfrey in 2010. "Looking back on that, you know, you sort of realise that material possessions are not the only thing that a child needs. But, sometimes, that child needs its biological mother." 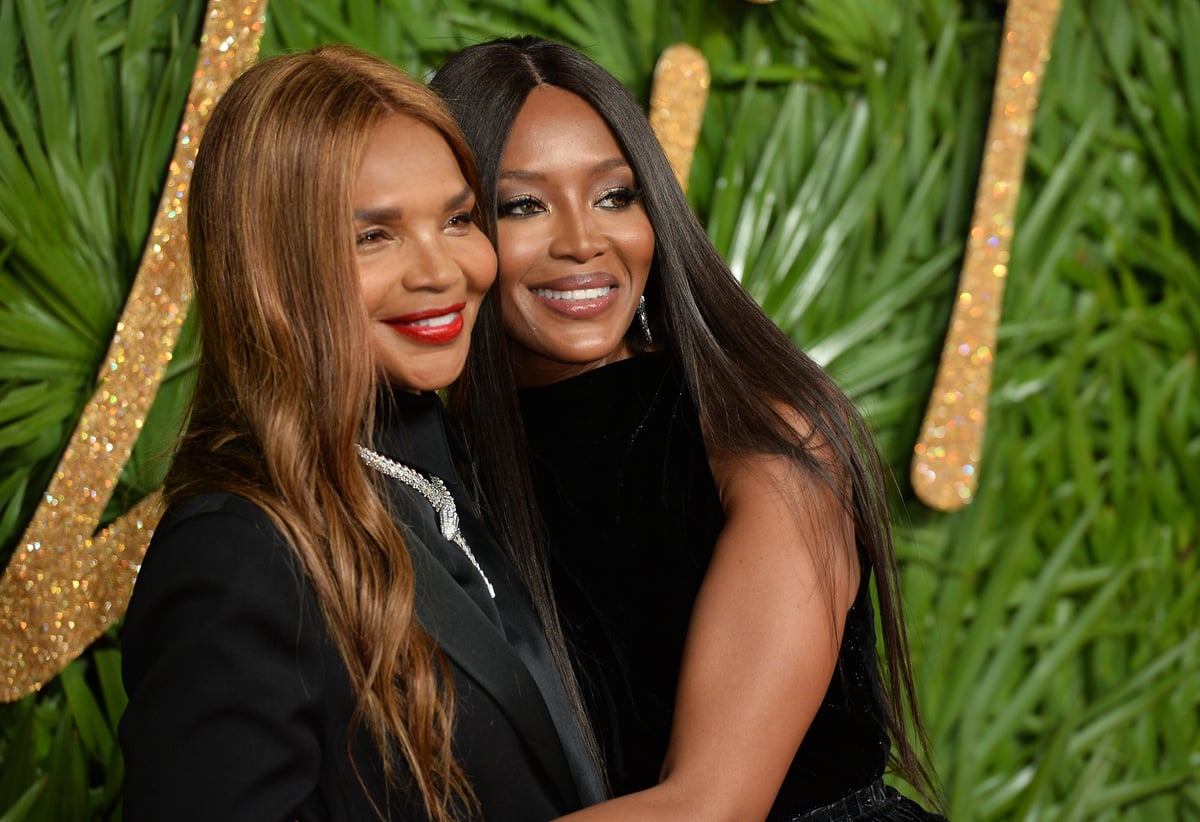 Naomi Campbell and her mum Valerie in 2017. Image: Getty.

While it was assumed that Campbell would follow in her mother's footsteps and become a professional dancer, that all changed when she was scouted by Beth Boldt, head of the Synchro Model Agency, at age 15.

"When I saw her, you could just tell – she radiated beauty. I had to go up to her and ask," Boldt told Vogue in 2018. "I’m always shy going up to people and saying, 'Would you be interested in modelling? You’re so beautiful'."

Three months later, she appeared on the cover of British Elle. 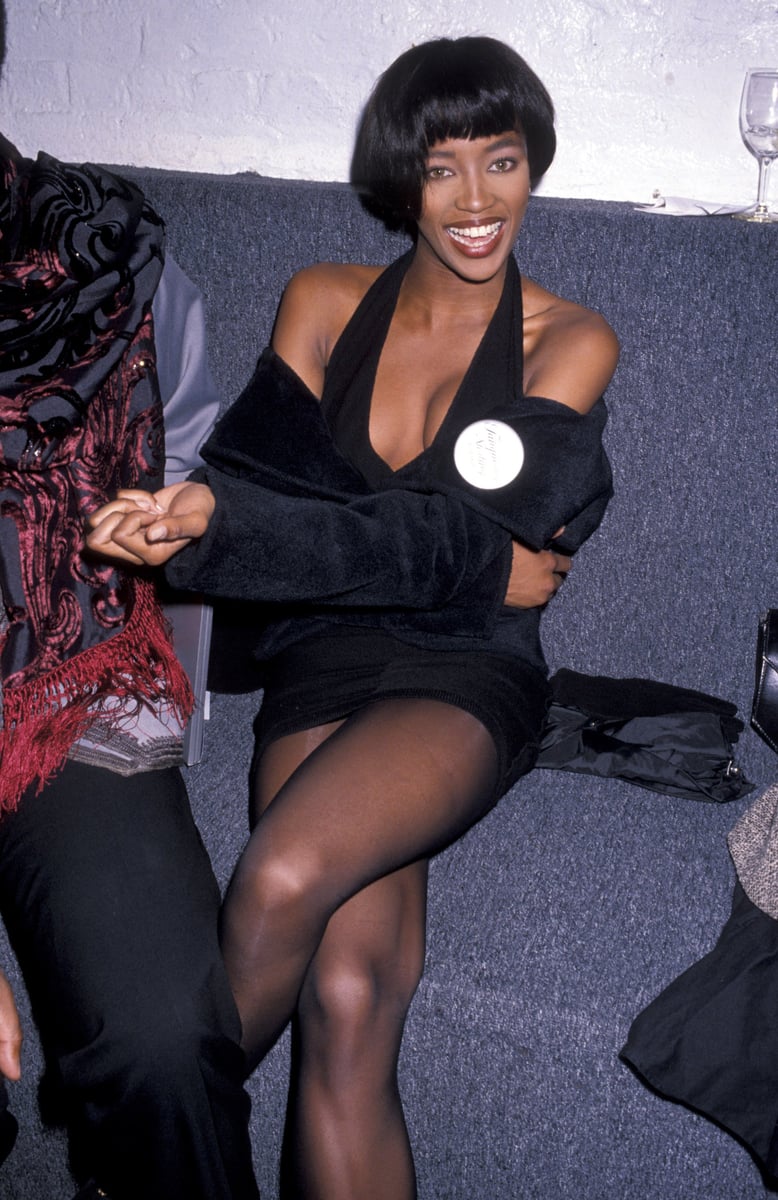 Not only did Campbell become the face of change but she was also vocal about the tokenism in the modelling industry.

"I’m never going to say I wasn’t picked because of the colour of my skin and I’d never go down that route, even if it was the case," she told Vogue in 2018. "It would just give me more strength and perseverance for me to go out there and get what I want."

During the '90s, Campbell became one of the "supers" alongside Cindy Crawford, Linda Evangelista, Christy Turlington and Claudia Schiffer - and later Helena Christensen and Kate Moss. Women who she's still close with today. 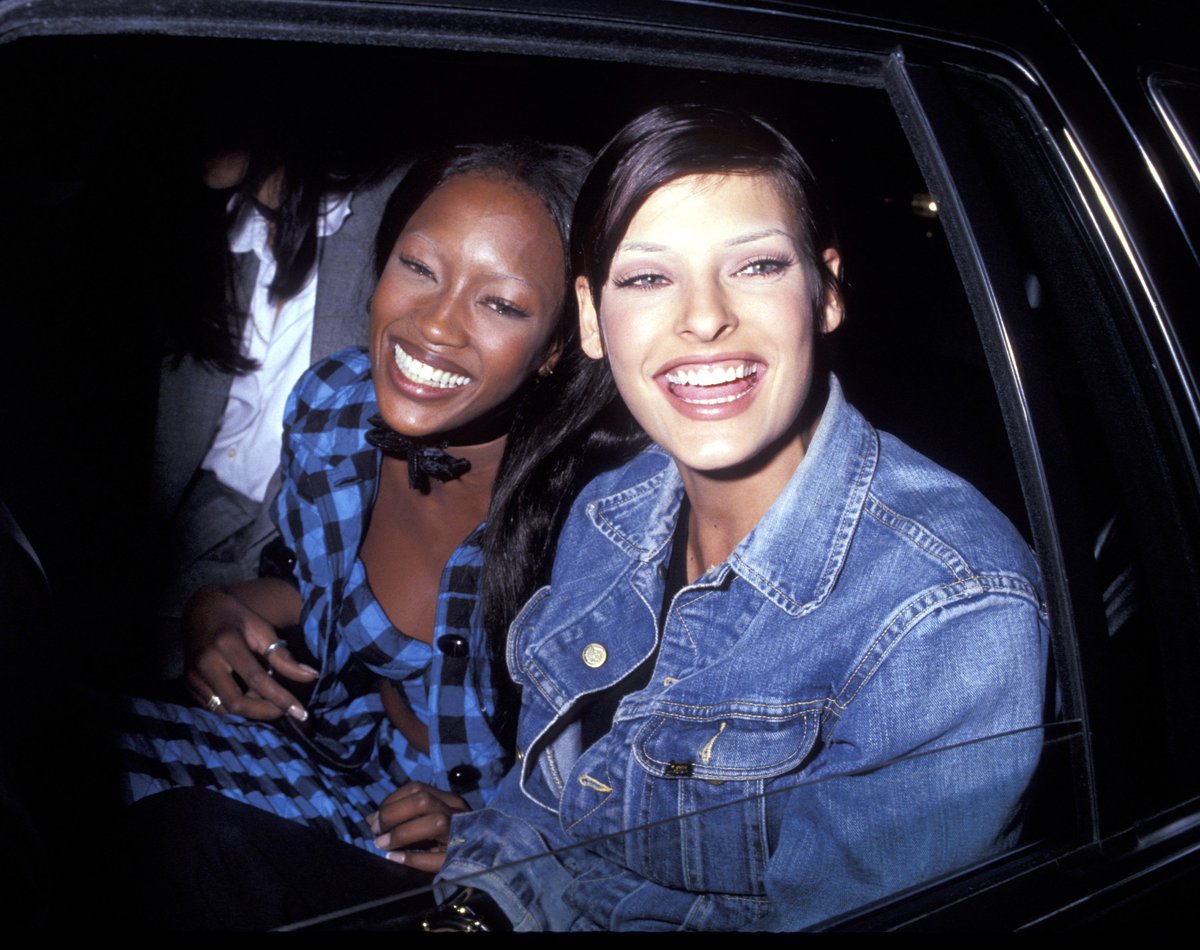 "I spoke to Linda this morning. You grow up together, you go to the same things, and you confide in each other," Campbell told Vogue in 2018.

"I’ll always be eternally grateful for the support from Christy and Linda, especially, towards me. When we all come together, the connection is still there. We’re happy for each other, whatever we’re all doing. It’s full-on support."

While Campbell looks back on her 35-year career and loves most of it, she notes the '90s as an incredible period.

"All the decades have been good to me but the Nineties were just amazing," she told the publication. "We were working really hard but we had fun. We’d shoot until 4am and no one ever complained."

But she also recognises the racial inequality.

"I may be considered one of the top models in the world, but in no way do I make the same money as any of them," Campbell said in 1991. 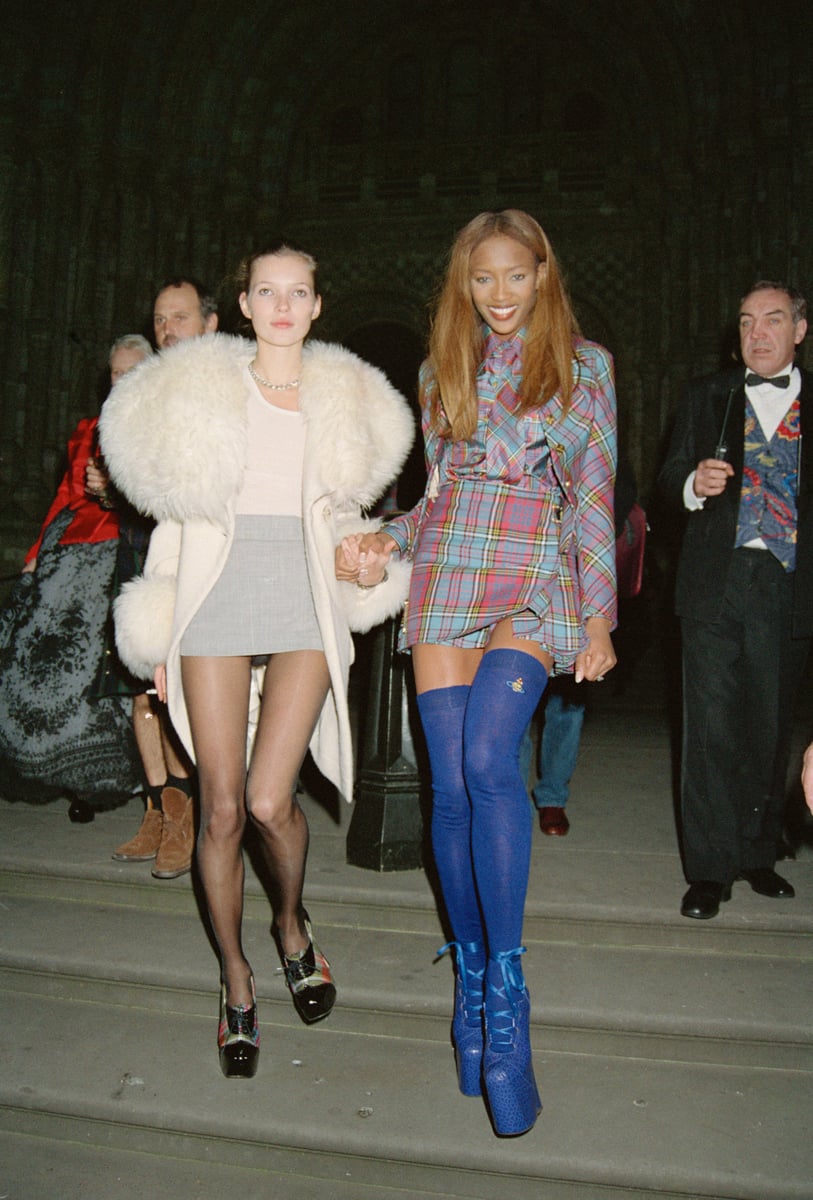 Naomi Campbell has dated a handful of high profile, well-known men. However, she has rarely, if ever, discussed any of them.

In 1993, she was engaged to U2’s Adam Clayton. They separated the following year. In 1995, she dated Leonardo DiCaprio.

Her most notable relationship was from 1998 to 2003, when she dated multi-millionaire businessman Flavio Briatore (the estranged father of Heidi Klum's eldest child). The couple became engaged but later broke it off. 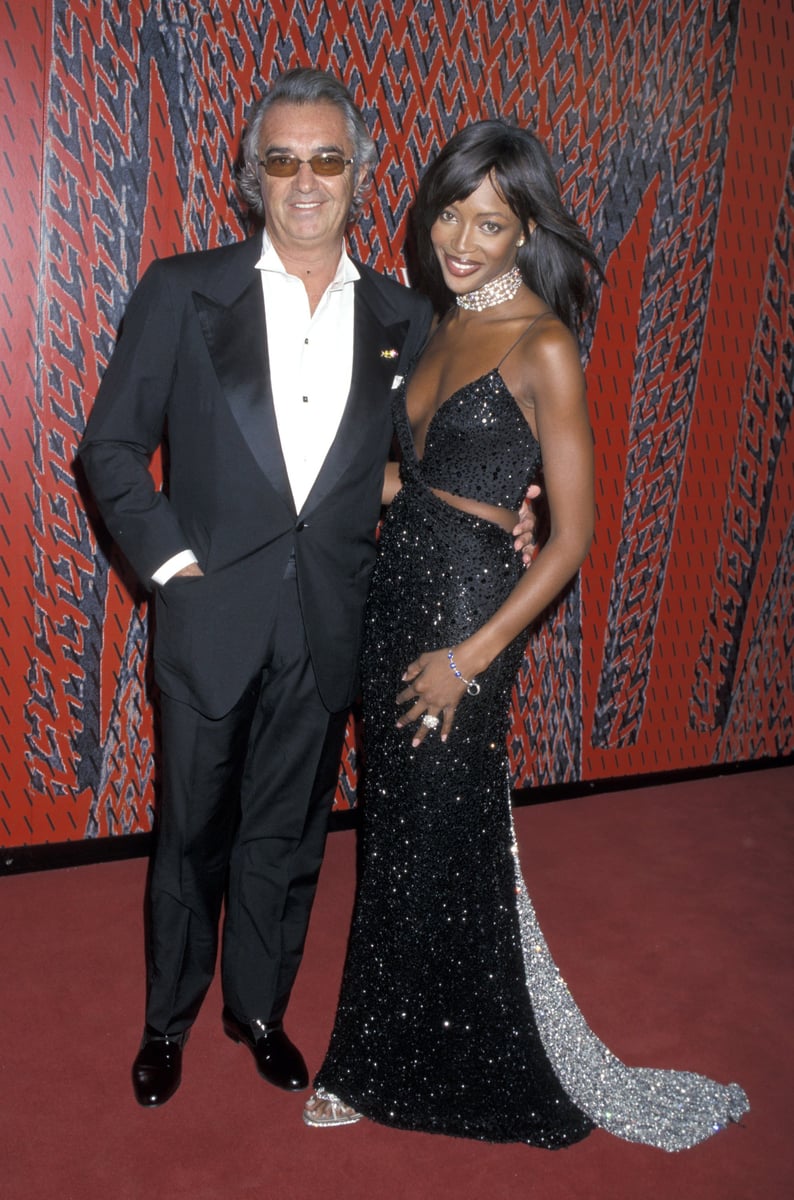 From 2008 to 2013, Campbell was in an on-and-off relationship with Russian billionaire Vladislav Doronin.

Most recently, in 2019, the supermodel reportedly dated One Direction's Liam Payne.

"I love a lot of people for different reasons," Campbell told The Guardian in 2016. "And the other thing that’s taken me a while to understand in my growing up is that you have to accept and love yourself first and not be validated by someone else."

At 24 years old, Naomi Campbell tried cocaine for the first time. A drug she later became addicted to.

"I was living this life of travelling the world and having people just give you anything," she told ABC in 2004. "I thought 'Ok, I'm a rock star too'. I'm living into this fantasy, which is really scary."

In 1999, after a five-year cocaine and alcohol addiction, Campbell checked herself into a rehabilitation facility. Now, she's been attending Narcotics Anonymous and therapy for years.

While plenty of Campbell's peers have since retired from modelling, 50-year-old Campbell continues to work. When asked whether she thought ageing is an issue in her industry, she simply said that she doesn't think about it.

"I don't think about [it]. I don't feel it. I do what I have to do," she told CNN. "After being in this business for 34 years, it's still always so surprising to me and I'm always thrilled."

But it's not always just about fashion. In 2005, Campbell set up Fashion For Relief, a runway show and auction that's helped raised millions for charities over the years. 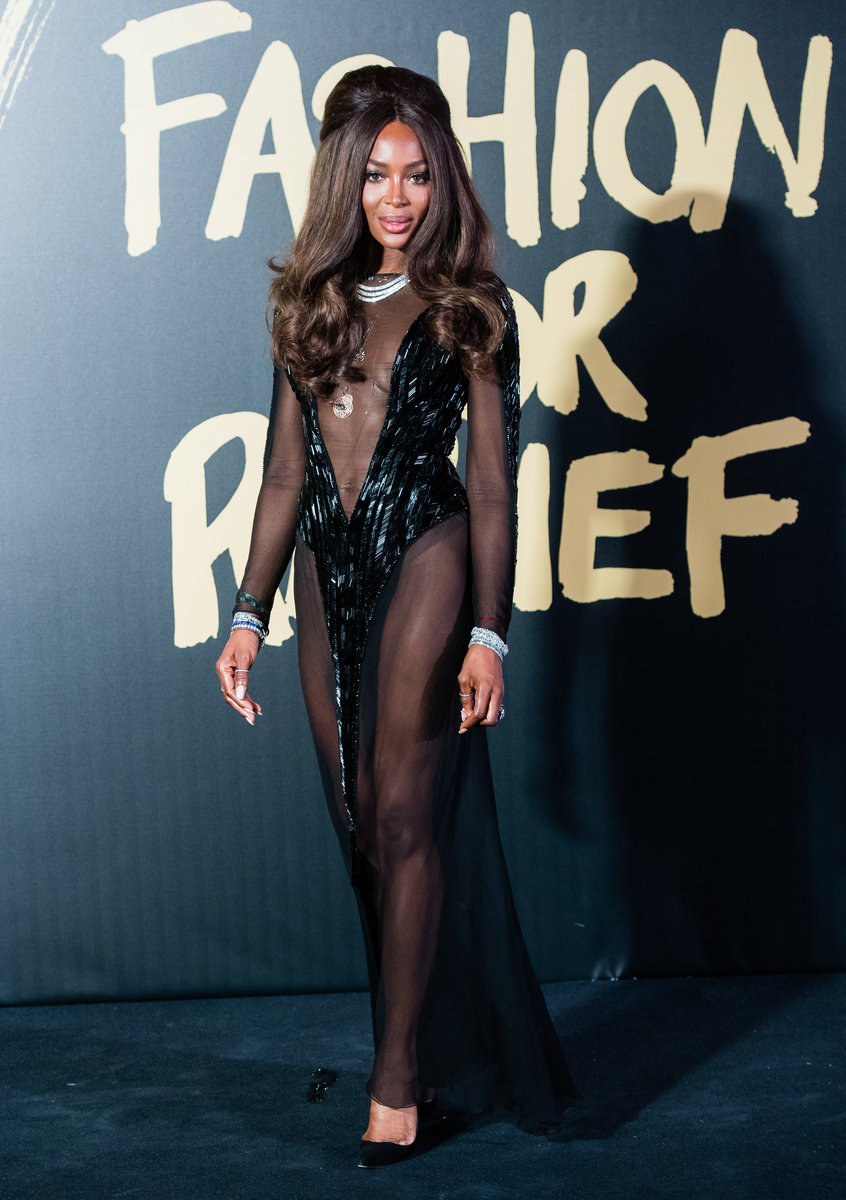 Last year, Campbell, like many of us, wasn't able to travel overseas or attend photoshoots like she regularly would. But she continued to stay busy.

"I have no time for boredom," she told Harper's Bazaar. "I’ve enjoyed the time of not having to rush to be somewhere, to reflect on the things that are matter and who is important in my life. I’ve enjoyed cooking, doing my own makeup and hair. In situations like this, you have to adapt, abide by the rules and get on with it."

However, the model faced some hardship too. In September 2020, the model lost her grandmother and the woman at the head of her family, Ruby.

"I’m sad for the loss of friends and family where you can’t mourn in the right way because of the restrictions," she said. "That’s been the hardest part, grieving the loss of people you love and not being able to come together. That’s been challenging."