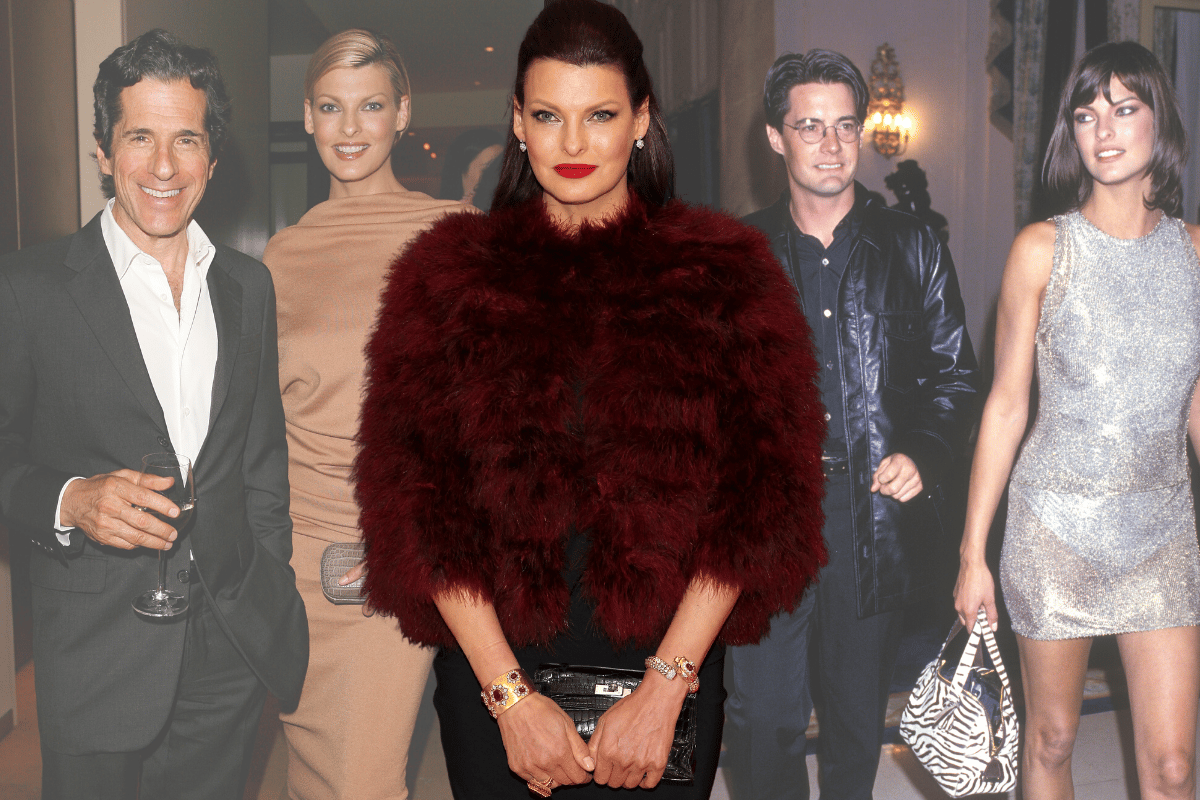 In the 1980s and 1990s, Linda Evangelista was one of the most recognisable people in the world. The Canadian model was a muse for fashion luminaries including Versace and Lagerfeld.

Not only was her modelling career making headlines, it was also Evangelista's relationships that caused a stir.

This week's episode of Extraordinary Stores: Linda Evangelista takes a look at the model's love life. 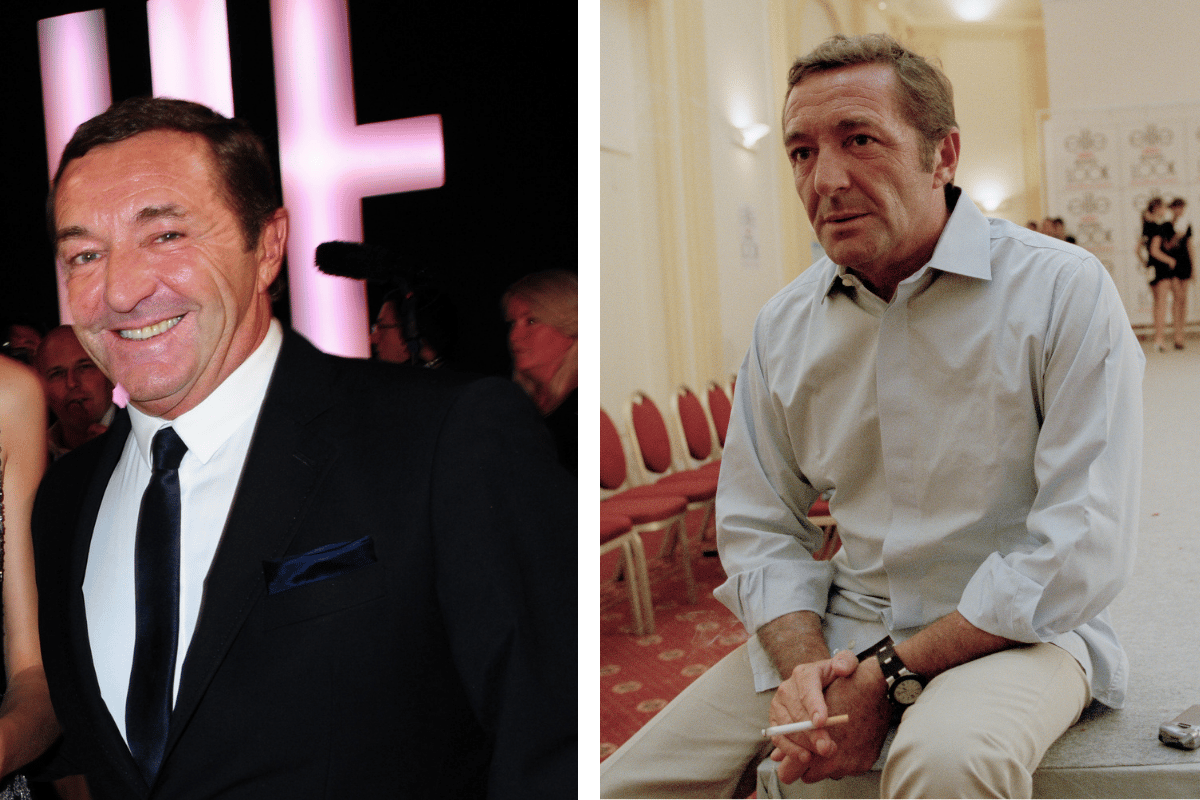 Image: Getty. At the age of 22, Evangelista met and married Gerald Marie, a French modelling-agency boss, 15 years her senior, in 1987.

For a time at least, on the outside they were the ultimate power couple with a unique professional and personal partnership: one was the world’s most powerful agents and the other the world’s most glamorous supermodel.

But the relationship was on rocky ground soon after marriage.

By 1993, the couple had decided to separate.

Yet it is alleged that before, during and after their marriage, Marie sexually assaulted, harassed and raped some of the women he worked with, something Evangelista says she was completely unaware of. 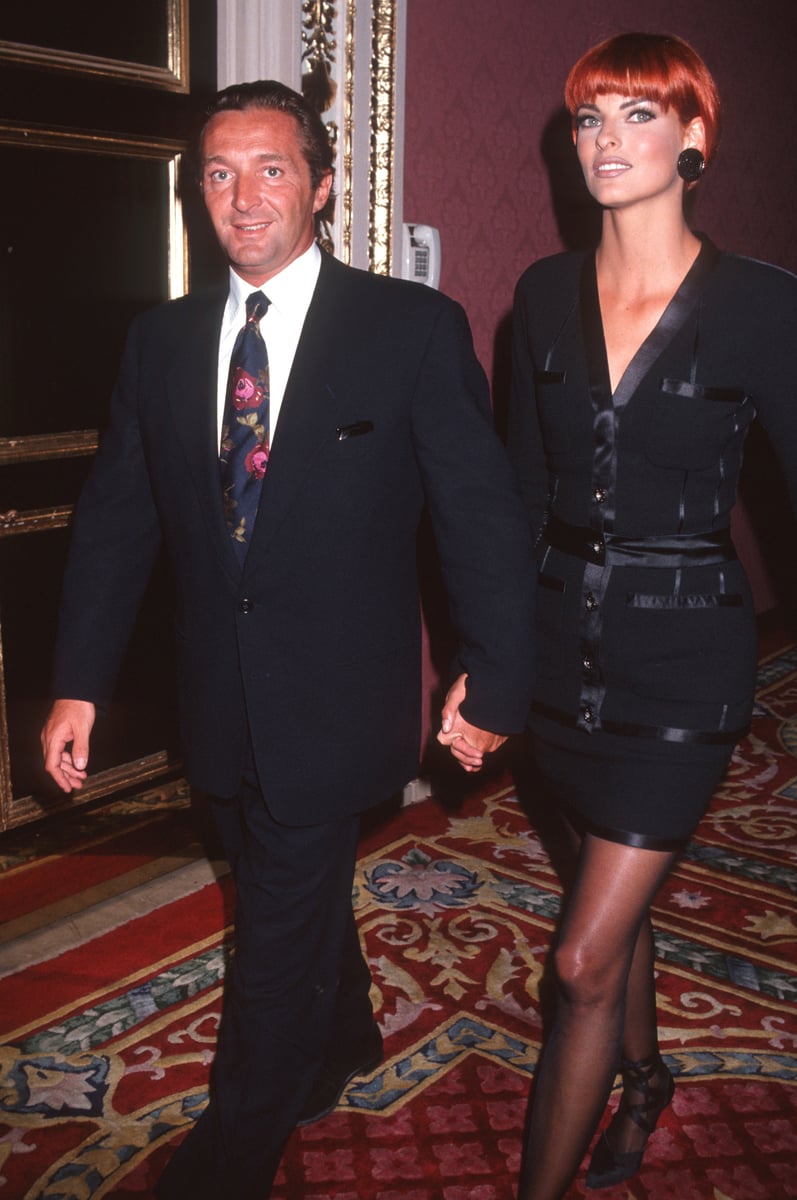 In September 2020, when the allegations against her ex-husband came to light, Evangelista had nothing but support for his alleged victims.

“During my relationship with Gerald Marie, I knew nothing of these sexual allegations against him, so I was unable to help these women,” she said in an interview with The Guardian’s Weekend Magazine.

It does appear however that Evangelista has kept in touch and remained close with some of Marie's family, not the man himself.

In 2017 Evangelista posted on Instagram that she was now a grandmother, courtesy of her former step-daughter Roxanne, who is Marie's child.

"It’s official. I am now a granny," the supermodel wrote. "In 1987 I received such a gift of forever love. That gift has given me a blessing." 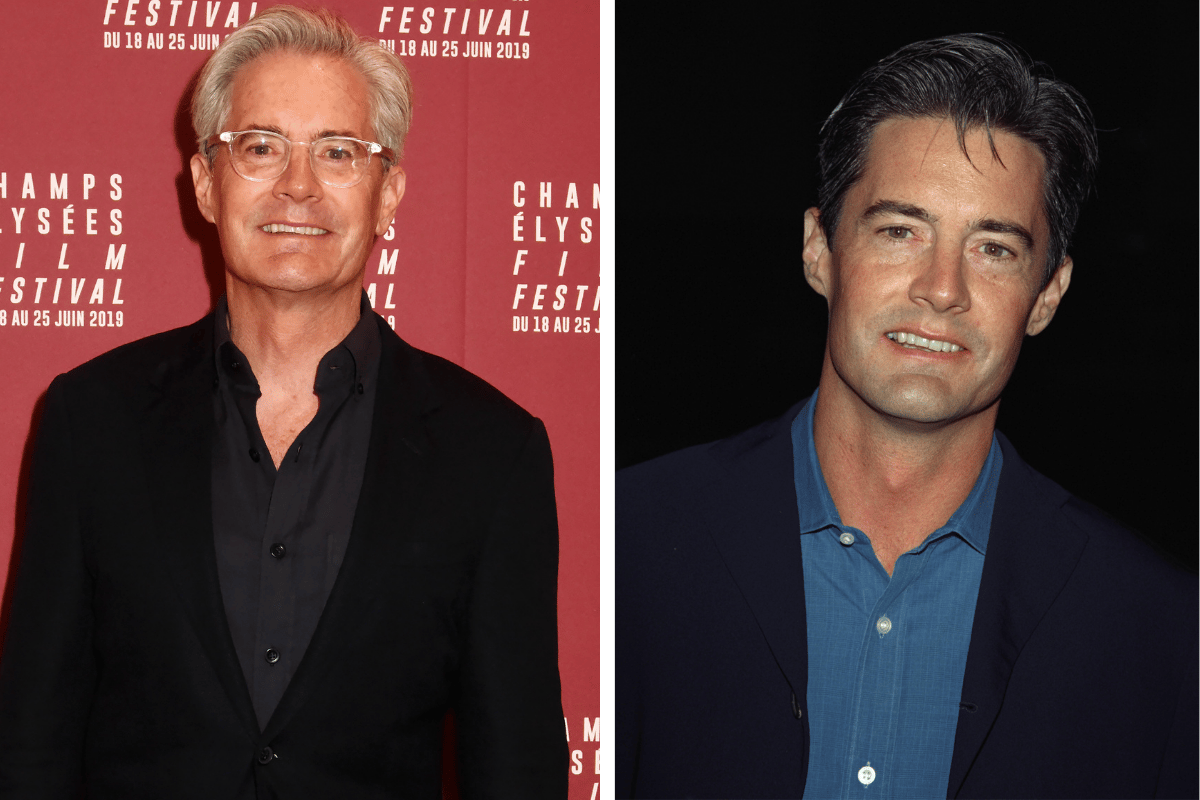 Image: Getty. One of most intriguing Hollywood actors during the '90s was Kyle MacLachlan.

He had a string of iconic roles during this time, such as Dale Cooper in Twin Peaks and Charlotte York's first husband, Trey MacDougal, in Sex and the City.

MacLachlan met Evangelista on the set of a shoot for a Barney's department store commercial in New York in 1992, a chance meeting which reportedly sped up the end of Evangelista's marriage to Marie.

"Both Evangelista and MacLachlan have said in interviews, it was just electric, when they met they could not deny this physical chemistry that they had," Reid said on Extraordinary Stories.

"And pretty much they were inseparable from that day forward. He was so 'actory' and artsy and of course handsome, Linda, the top supermodel of the world, they were at all the premieres, all the fashion shows front rows," noted Reid.

"There were several sets of amazing looking couples in the '90s at that time right? Tommy Lee and Pam Anderson, Hugh Grant and Elizabeth Hurley. And Johnny Depp and Kate Moss. Neither one of them [Evangelista and MacLachlan] was really like a mainstream celebrity. You know, Kyle was on that really weird cult hit Twin Peaks. Then you have Linda who was the supermodel: extraordinarily high fashion."

"So, the two of them together, were these really curious pop culture icons, and they just looked really amazing…. And that's what we wanted." 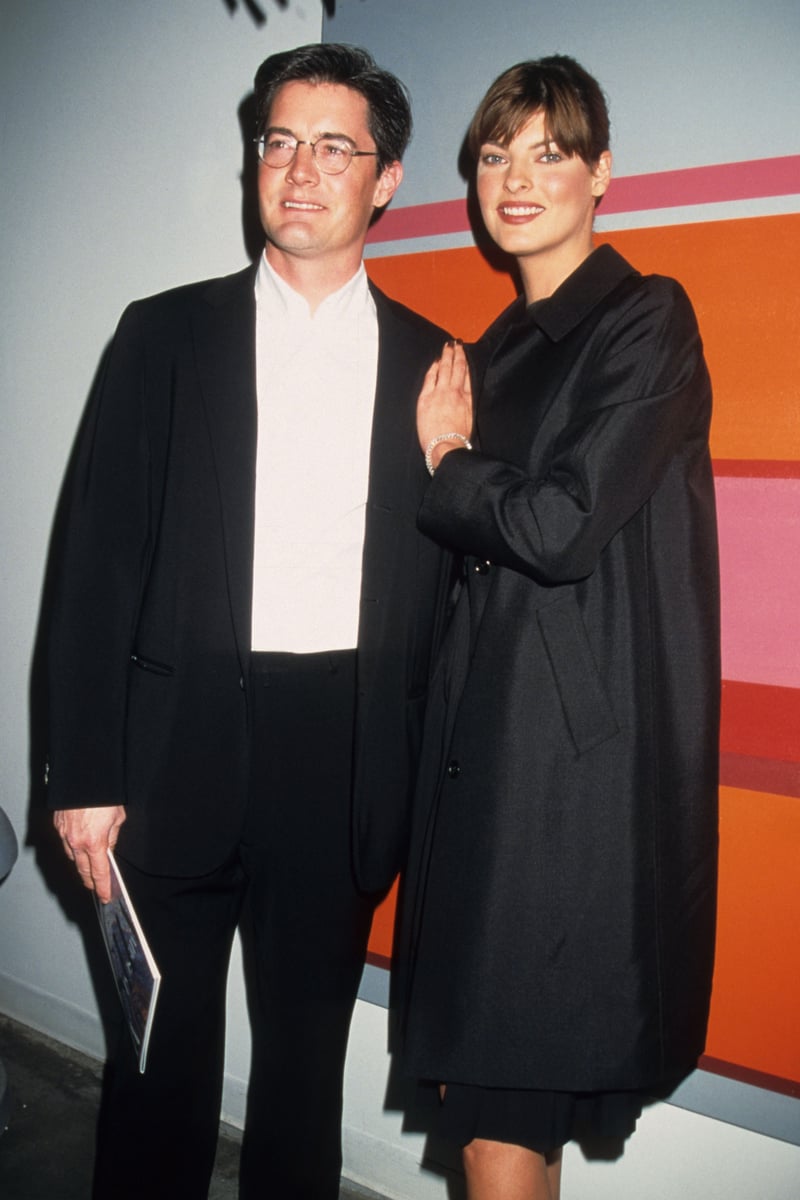 By 1995, Evangelista spoke publicly of wanting to marry MacLachlan.

Appearing on The Tonight Show with Jay Leno, the host asked about her relationship.

Leno: "How long have you and Kyle been going out?"

Leno: "Any plans? Do you want to get married?"

Evangelista: "I want to get married, and I drop hints all the time, and not even subtle hints, I come right out and beg. *laugh* I even cut out pictures of big huge engagement rings out of magazines and I put them on the refrigerator with little magnets! He treats me good." 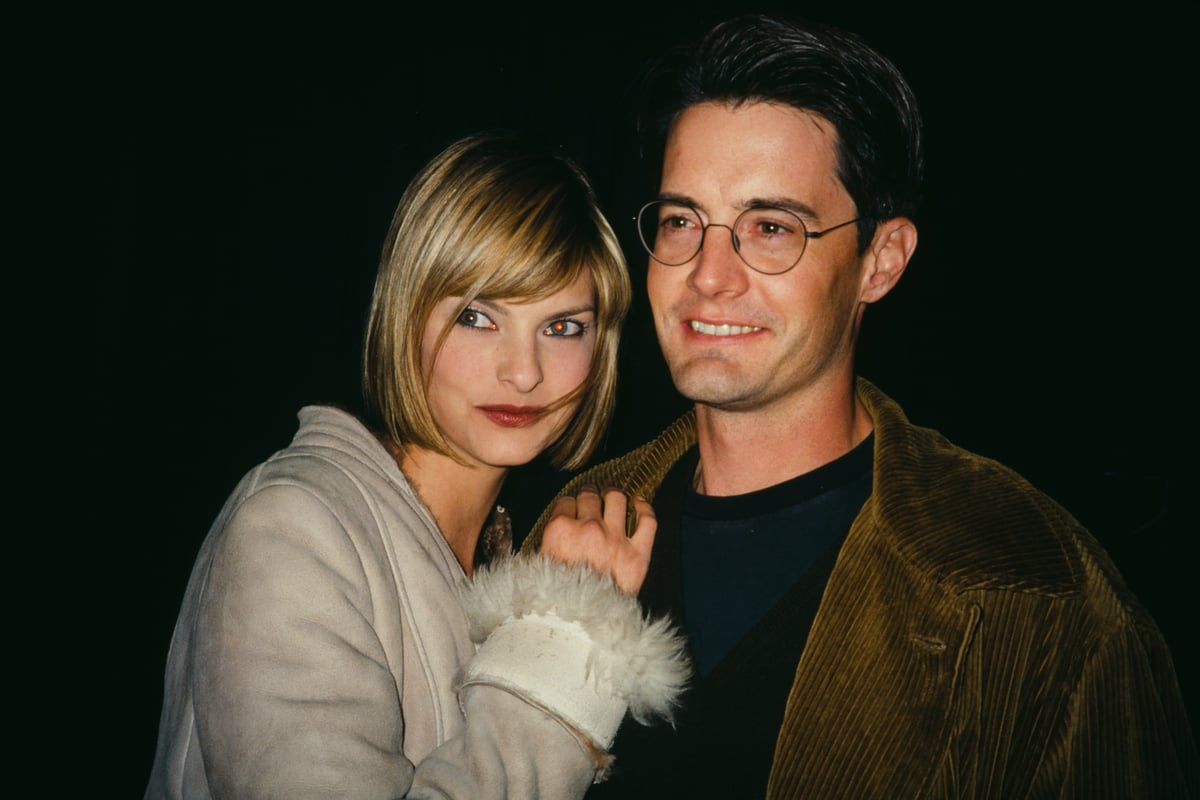 The public display of affection from Evangelista must have worked in some capacity, because the couple became engaged later that year. But they never ended up walking down the aisle.

"They never got married, they lasted until 1998. And finally, I believe Linda finally said, 'look, it's do or die time. We get married, or it's over.' So Kyle said, 'I don't want to get married. I like things the way they are.' So Linda is the one that pulled the plug," Reid shared.

The pair released a statement saying they simply grew apart. “We’ll always remain friends, and our families are still close,” Evangelista said at the time.

Now in her 30s and single for the first time in a long while, Evangelista decided to uproot her life in New York and head to the French Riviera and put her modelling career on the back burner.

"Linda had been single, she was on her own. She decided she wanted to live on the French Riviera: who wouldn't. And so it was around this time she announced her retirement from modelling. She says she wanted a tranquil existence."

Then, on a night out in St Tropez in 1998, a supermodel and a world-famous footballer met for the first time, each an icon in their field. 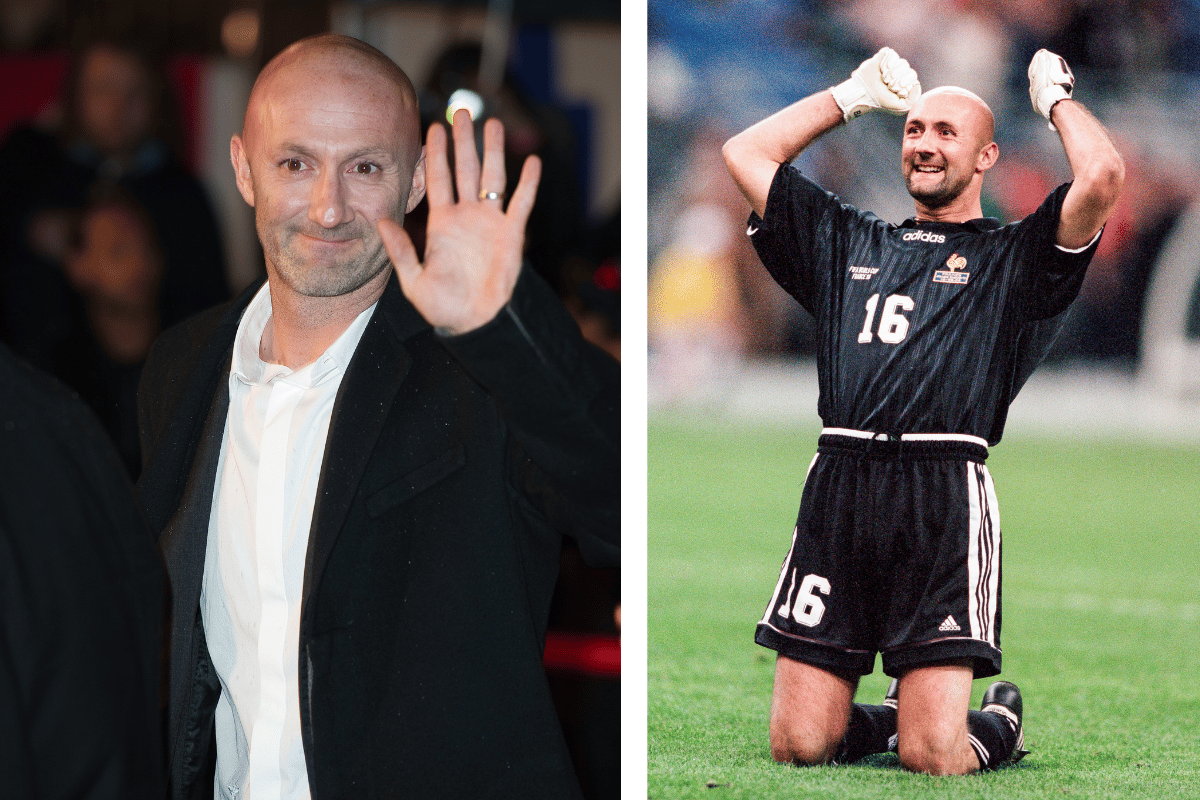 Image: Getty. For any super soccer fans, this man won't need much of an introduction.

Fabien Barthez is a French racing driver and a former professional soccer player who played as a goalkeeper, in France, England, and Monaco.

At the time he and Evangelista were an item, he was one of the most successful sportsmen in Europe, especially because of his recent FIFA World Cup glory with France.

He was celebrating a new chapter in his career and in his personal life, as the pair confirmed rumours of a relationship.

The couple's relationship was on and off for two years. In 1999, Evangelista fell pregnant.

Sadly, their baby was stillborn at six months, an experience she would go on to describe as the hardest thing she had ever had to go through.

"Linda has always been very private and holds her cards very, very close. She's really never elaborated on losing the baby six months in. But by all accounts, the miscarriage it really created an emotional distance between she and Barthez. They couldn't surmount what happened," Reid said on Extraordinary Stories.

The pair officially split up in 2000. 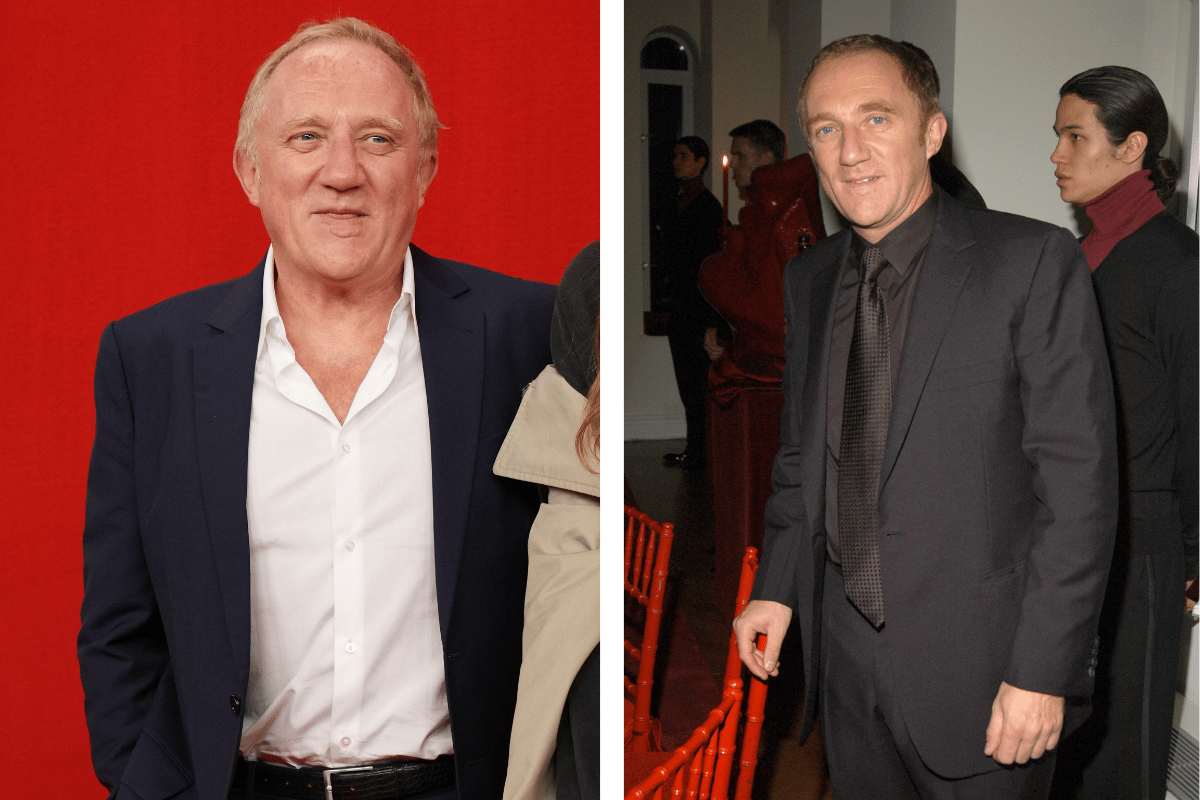 Image: Getty. In the years following her split from Barthez, Evangelista decided to make a comeback in the modelling industry.

At the age of 40, she was back on magazine covers again and on runways for Dolce & Gabbana, Chanel and Versace alongside models 20 years her junior.

Then in 2006, the 41-year-old announced she was expecting another baby. At the time, the identity of the father was unknown.

"So in 2005, she met a very, very, can I say very wealthy man Francois-Henri Pinault. Now if that name sounds familiar, he's the billionaire CEO of the luxury company, which owns Gucci, Yves Saint Laurent, Balenciaga, all the big luxury firms," said Reid.

If the name Francois-Henri Pinault sounds familiar: it could be because he is now married to Hollywood actress Salma Hayek.

Evangelista started dating Pinault in 2005, the pair having a fling which reportedly lasted for four months.

"Now, gossips say that he was on a break actually, from Salma Hayek when he started dating Linda. So four months into their relationship, Linda became pregnant with Francoise's baby," Reid revealed.

Listen to the trailer for Extraordinary Stories: The Supermodel Who Vanished on MPlus. Post continues below.

It was also reported that Pinault did not want Evangelista to go ahead the with pregnancy, but that Evangelista wished to have the child, and so she decided to keep it. 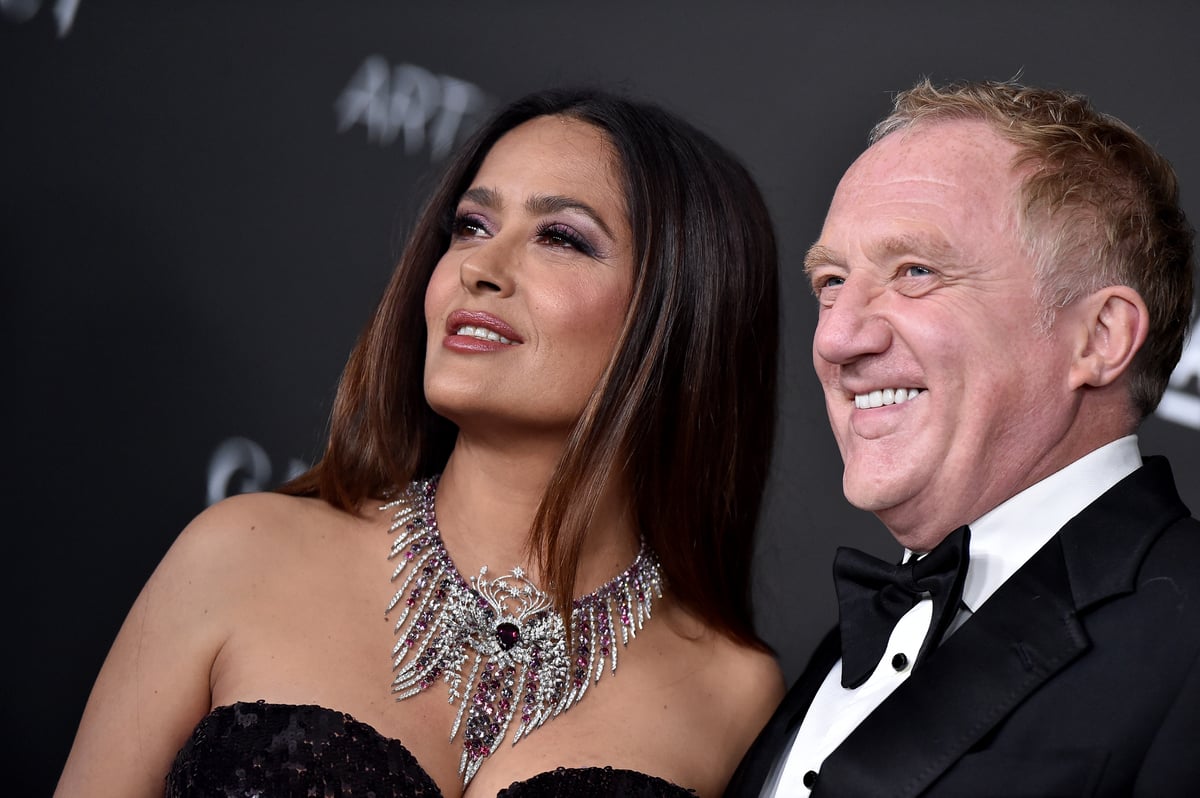 Once Augie was born, Evangelista remained tight-lipped about her child's biological father.

But all of that changed in 2011, when Linda filed a lawsuit against Pinault in a New York children’s court, for child support.

Pinault tried to downplay his previous relationship with Evangelista, saying in court: "We were dating four months and I didn’t even know her very much. She was so happy to be pregnant but it was not planned. I decided to stop the relationship at that point.”

He also accused Evangelista - a mogul in her own right - of wanting the money to pay for her lifestyle, his lawyer arguing that the idea that a child would need $46,000 per month was ludicrous.

Since that baby’s father was a multi-billionaire, Linda’s lawyers argued it was only fair, noting: "The child is entitled to the same standard as he is enjoying, and his other children. So no. It’s not outrageous. Not if his dad is a billionaire.”

Eventually the couple settled the case out of court.

These days, it appears the family are on better terms.

Just in August this year, Hayek shared a post of her stepson 15-year-old Augie on her Instagram. Linda then commented underneath the post with love hearts. 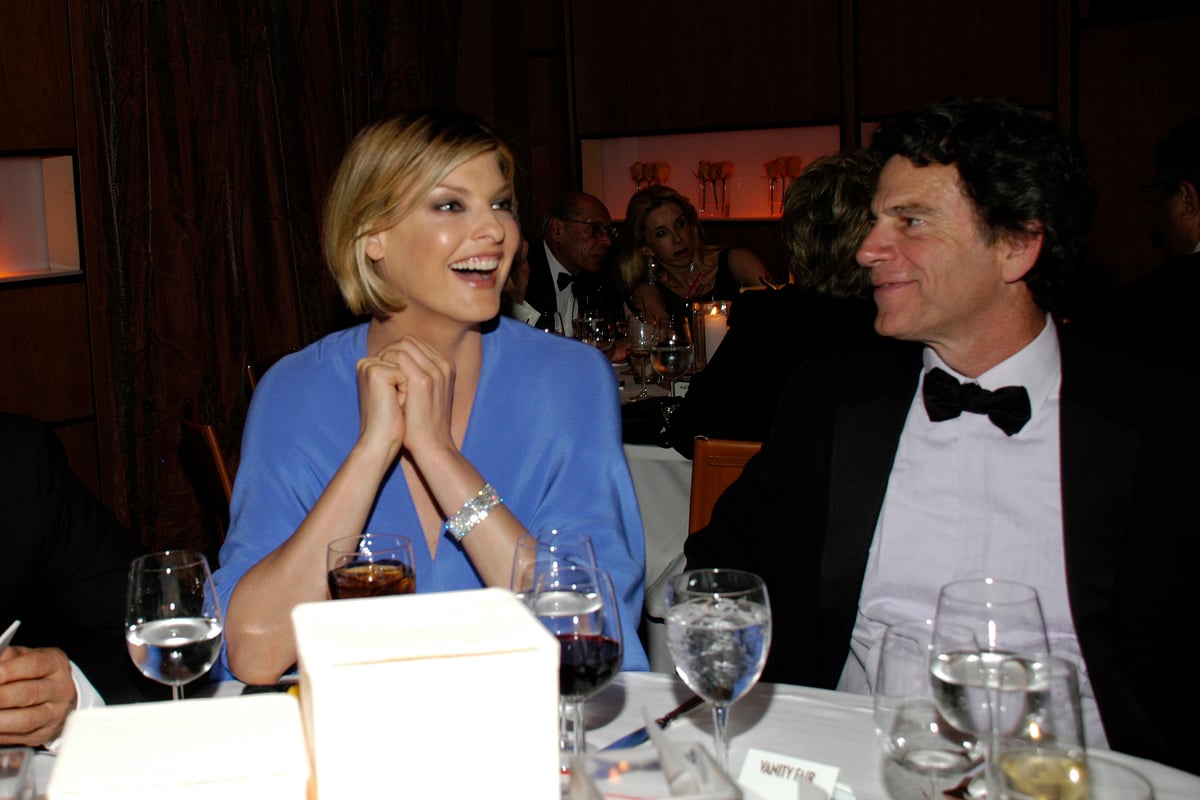 Image: Getty. Evangelista's most recent public relationship to date was with Peter Morton, a multi-millionaire restauranteur, the co-founder of Hard Rock Café. The pair met in 2006, while the model was pregnant with Augie, but parted ways in 2013.

According to Page Six, sources suggest that couple's split was due to their disagreements over whether to live in New York or California. Evangelista is based in New York. 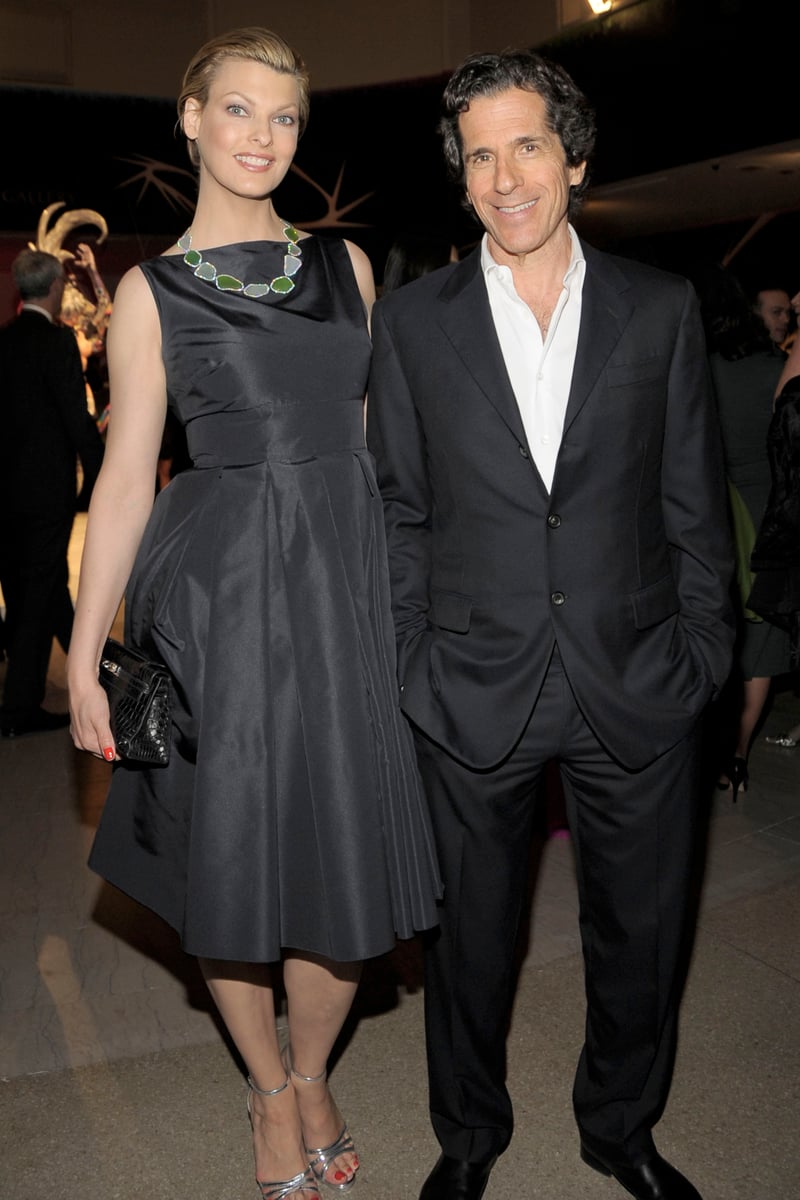 But Evangelista remains hopeful about the idea of finding love again, looking back at her experiences fondly in an interview Love Magazine UK.

"Besides a couple of mistakes I think I've been really gifted in love. I've had great relationships. I just don't think that all relationships last forever. Sometimes there's just no more to share as a couple," she shared.

"I had great moments of being alone too. Oh, initially you don't think so. But great things happen when you're alone."

For more on this topic, be sure to subscribe to MPlus to gain access to Mamamia’s Extraordinary Stories podcast.