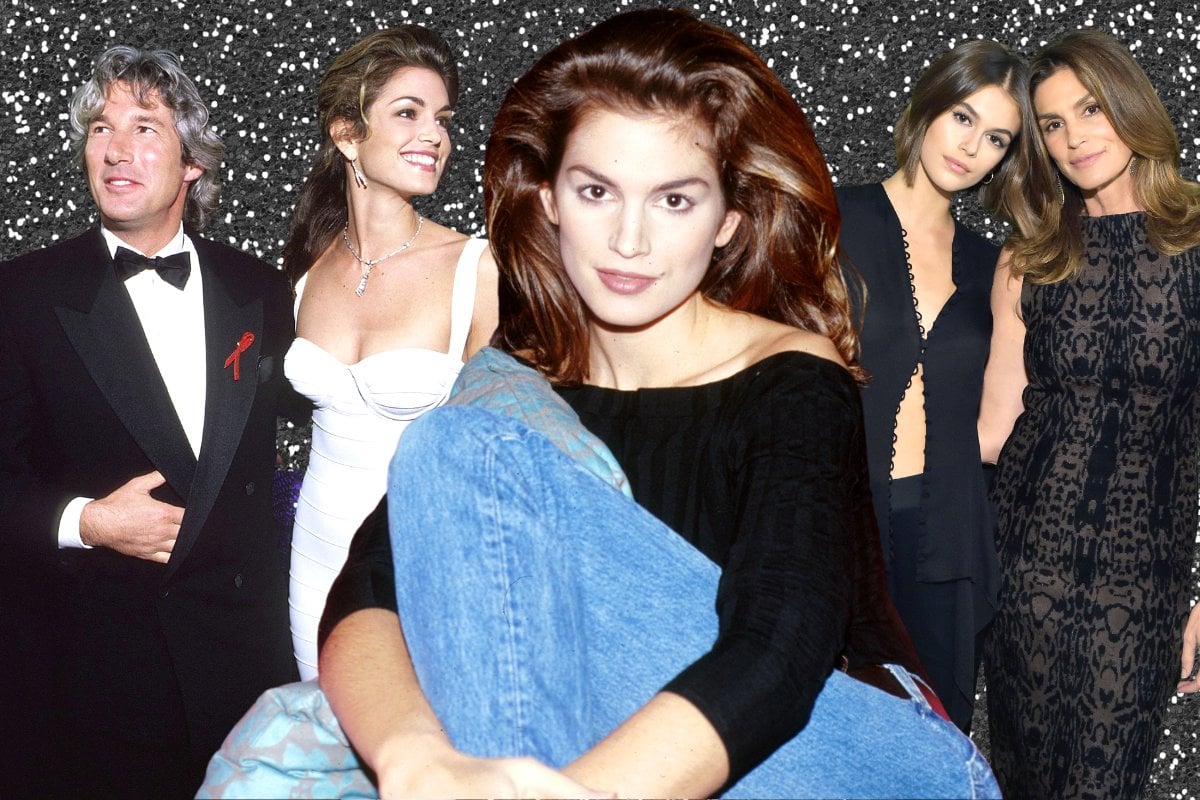 If someone asked you to name a list of '90s It-girls, Cindy Crawford would more than likely spring to mind.

At the height of her fame, the now-retired supermodel was working with every major fashion powerhouse and gracing the covers of Vogue, Harper's Bazaar and Elle, regularly.

But before modelling, success and starting her own family, Crawford was just a regular girl from the American Midwest.

Watch: When the original '90s supermodels reunited. Post continues below.

Cynthia Ann Crawford was born on 20 February 1966, in DeKalb, Illinois. She was the second eldest of four children and during her early years, had a relatively normal upbringing.

When Crawford was eight years old, her two-year-old brother Jeffrey was diagnosed with leukemia. He died weeks before his fourth birthday.

"I remember my parents coming home and telling us that and I didn't really know what it meant. What I saw was that instantly it takes over the whole family," Crawford told Instyle.

Her rise to fame.

Crawford's first memory of modelling was far from her most glamorous.

In an excerpt from her book Becoming shared by Elle, the supermodel explained that during her sophomore year of high school, she received an unexpected phone call from one of the local clothing stores who wanted to hire her as a model.

When she arrived at the store, the manager apologised and explained that they never called her. As Crawford left the store, she found two classmates around the corner sniggering.

The following year, Crawford got a call (this time it wasn't a prank) from a local photographer who wanted to photograph her for the Northern Illinois University paper. The photo changed her life.

"When I was 16, Roger Legel, a local photographer in my small town of DeKalb, Illinois, asked to photograph me for the college newspaper. I agreed, and he shot this picture at the backyard pool of my high-school boyfriend. I was still a teenager and dreamed of becoming something big – a nuclear physicist or the first woman president, the two biggest jobs I could think of. Doing this first shoot changed my life," Crawford told Vanity Fair.

"The photographer encouraged me to go to Chicago to try to find an agent. At the time, my dad thought modelling was a nice word for prostitution, so my parents were very protective of me. I went to Chicago, ended up signing with Elite, and from there started doing catalogue shoots as well as working with Victor Skrebneski – the most important photographer in Chicago."

While Crawford began modelling during her teenage years, she didn't plan on taking it on as a career. She originally planned to study chemical engineering.

In 1984, Crawford graduated from high school as valedictorian and earned an academic scholarship to study chemical engineering at Northwestern University. However, within Crawford's first semester at university her modelling career took off and she dropped out.

During the following years, she modelled for Chanel, Versace and Dolce & Gabbana, to name a few, and appeared on the covers of every major magazine, multiple times.

In 1987, Crawford met Hollywood star Richard Gere through a mutual friend, Herb Ritts, at a barbeque he was hosting for Elton John. Crawford was 21, Gere was 38.

"We pretty much started dating right away," Crawford shared on Oprah's Master Class. "When I was with him, that's when I was becoming well-known as well."

In 1991, the couple tied the knot with homemade tinfoil rings at The Little Church of The West in Las Vegas; the same chapel that Billy Bob Thornton and Angelina Jolie got married at. Two guests attended.

But after four years together, the couple divorced.

"We didn’t spend enough time together," Crawford told People in 1995. "And we’re equally responsible for that. We thought it would be okay if we just flew in from Paris to LA to get together for a night to see each other. It wasn’t."

Crawford met businessman and former model Rande Gerber at the wedding of her agent, who Gerber also knew from his childhood summer camp days. But before they started dating, the two became friends.

"It’s funny, both my sisters met their husbands at weddings too," Crawford recalled when speaking to Vogue. "But I wasn’t ready, I didn’t want to be going straight from being married to another relationship. We became really good friends, so two years after that we were like: 'Okay, we really like each other!'"

In 1999, their first child, Presley Walker Gerber was born. And in 2001, they welcomed their daughter, Kaia Jordan Gerber.

With two ex-model parents, it's no surprise that both Presley and Kaia got into the modelling business at a young age.

Kaia, who looks nearly identical to her mum at the same age, was signed to IMG at 13 years old.

She scored her first magazine cover the following year and has since worked with Chanel, Prada, Tom Ford and Versace (again, to name a few). She also made her acting debut in 2016 when she appeared in Sister Cities.

While their son Presley started modelling at a young age too, it hasn't been a focus for him recently. Instead, he lives in the guesthouse of the family's Malibu home and works at his father's Cuban restaurant, Café Habana.

Over the past year, the 21-year-old went through a rebellious phase. In 2019, he was charged for driving while intoxicated and earlier this year, he got the word "Misunderstood" tattooed on his face.

"It says misunderstood because that’s how I felt my entire life," he said during a now-deleted Instagram video.

These days, 53-year-old Crawford lives in Malibu, California and has her own beauty line, Meaningful Beauty. Her husband Rande continues to own his restaurant Café Habana and tequila company, Casamigos.