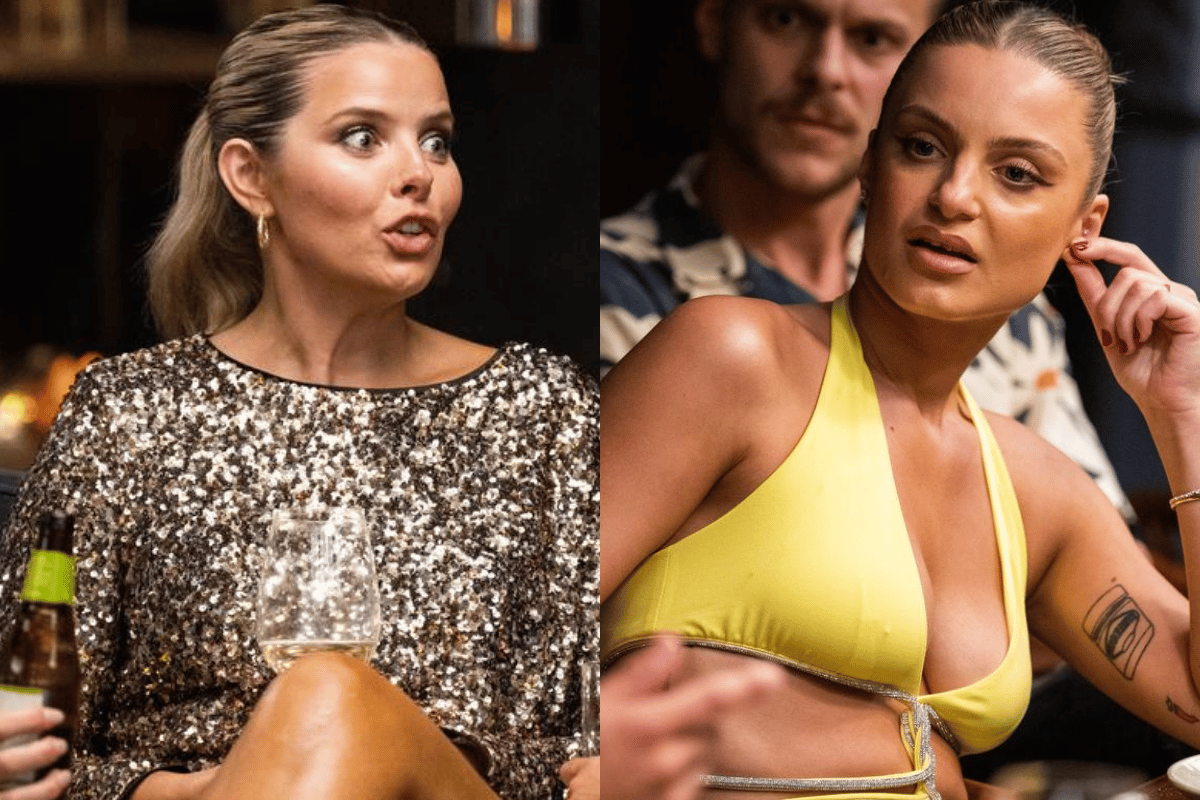 This season of Married At First Sight has given us one dollop of chaos after another.

And the next 'scandal' has been queued up for this week, with the show following the storyline that a 'nude photo' was leaked by another member of the group.

In the promos we saw contestants Sam, Tamara, Jackson, Cody and Selina all admit to having seen a photo of "a particular bride in her birthday suit, laying on the bed with her butt up".

Watch the trailer for this season of Married At First Sight Australia. Post continues after video.

And this week, viewers saw plenty of discussion among the MAFS contestants about the "nude photo scandal" and Domenica's Only Fans - and a lot of the discussion was pretty problematic.

As Jack pointed out to Domenica: "Everyone has seen a photo of you naked!" And without her realisation or consent too.

So, ahead of the mayhem, here is everything we know.

The person in the alleged naked photo is Domenica.

Domenica received quite the earful this week.

There's one thing on everyone's mind as the final weeks of #MAFS kick off, tonight 7.30pm on @Channel9 and @9Now! pic.twitter.com/tnaWAR3VYv

In fellow bride Sam's opinion, she didn't believe the photos were that much of an issue.

"There is a photo of a bride and look, I did see it," she explained to Yahoo. "To be honest, I am a relatively sex-positive person and everyone’s on OnlyFans these days, so I didn't really think too much of it at the time.

"Like, whatever, everyone’s got a nude out there floating on the internet, who really cares. I didn’t pass it on and it left my mind. I had my own problems.

She added: "But you’ve got to love the drama... And you know what? I don’t even think that's the most dramatic thing that ever happens again. It’s too much. I swear we’re all going to need therapy for the rest of our lives."

Olivia is the culprit.

As we discovered this week, Olivia made it clear she has no intention of "ever" being friends with Domenica ...which makes this whole situation just a little bit sus.

So after the glass-smashing event, Olivia decided to do some "research" on "who she's dealing with". And after such research, she came across an Only Fans account. Domenica's to be exact.

Another participant anonymously told the So Dramatic! podcast that the only ones of the group who had not seen the photos were Ella and Mitch.

On top of this, the source revealed Domenica was allegedly "blindsided at the dinner party and had no idea this was going around or was even going to be brought up."

They went on to say that there were two brides - Selina and Tamara - who'd planned to pull her to the side and let her know about the photo.

However, Cody took it upon himself to bring it up in front of everyone.

“In hindsight, we think he just wanted to involve himself because he knew he would get airtime,” the source said.

The entire group then exploded as a result of the nude photo. Cue some sl*t shaming.

“It’s pretty f**ked how the entire group go about it," the anonymous contestant explained. "They literally went on a witch hunt for Domenica.

"Olivia is just trying to tarnish Dom’s reputation and paint her as the bad guy to save herself. It was pretty s**tty that the group fell for it."

Reply
Upvote
So, how did Olivia (allegedly) find this nude photo? Did she just randomly go looking for Domenica on Only Fans - and pay for the photo? Or did someone on the production team point her in the right direction? There's a pretty long application to fill out for the show,  it's been written about on here. Surely they ask about things like whether you're on OF, or other social media? Smells fishy to me. (Also, didn't the American bloke show his naked bum on TV in one of the earlier episodes? Pretty hypocritical of the show the engineer a "nude photo scandal" while also showing the exact same amount of nudity on TV. )
News
General
Opinion
True Crime
Politics
Sport
Explainer
Entertainment
Celebrity
Reality TV
Movies
TV
Books
Rogue
Royal
Lifestyle
Beauty
Fashion
Weddings
Home
Wellness
Health
Fitness
Travel
Food
Parents
Before The Bump
Pregnancy
Baby
Kids
Teens
School
Parent Opinion
Work & Money
Money
Finance
Career
Lady Startup
Relationships
Sex
Dating
Separation
Friendship
Family
Real Life
Couples