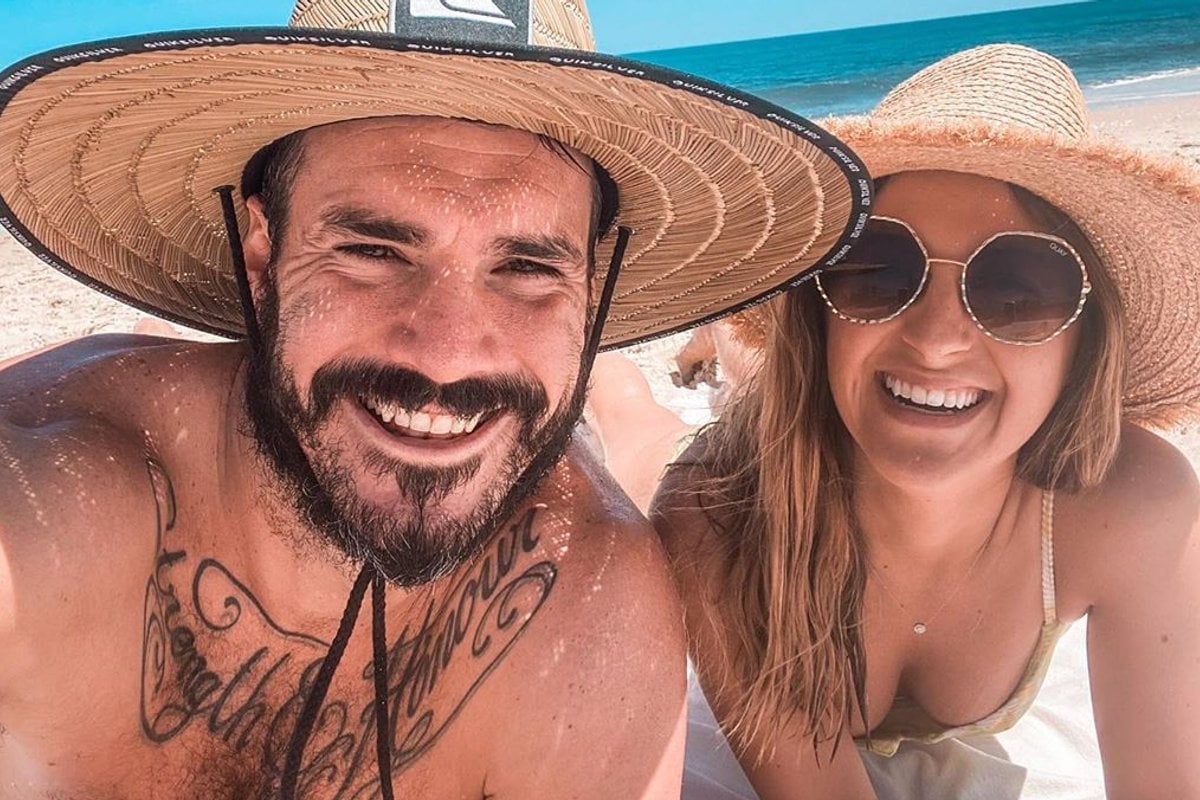 1. Oh. A quokka may have just leaked The Bachelor's Locky and Irena's engagement.

Well, this is awkward.

It looks like the social media team over at Rottnest Island may have just let slip that Locky Gilbert and Irena Srbinovska have gotten engaged.

On Monday, Channel 10 Perth shared a selfie that Locky and Irena took with a quokka - as you do - while visiting Rottnest Island.

Who is more excited, Locky and Irena or the quokka? 😄 #quokkaselfie #lovemyrotto #perthisok

"Congratulations on your engagement! That’s one ‘Locky’ quokka," read the comment, which was later spotted by the So Dramatic! podcast.

Locky and Irena, do you have something to tell us?? 😱💍🥰🔍 #thebachelorau

So far neither Irena nor Locky have confirmed the news, but we're excited for a possible Bachie wedding in the future.

2. “He was so adamant that he hadn’t done anything wrong.” Sabrina reveals that Firass made her cry on SAS Australia.

Listen to The Spill, Mamamia's daily entertainment podcast. In today's episode, Laura Brodnik and Kee Reece chat to Erin McNaught about everything SAS Australia, from filming, to celebrity feuds and her near death scare. Post continues below.

Everyone's been talking about Firass Dirani's behaviour on SAS Australia lately. And it hasn't exactly been for the right reasons.

Now AFLW player Sabrina Frederick has opened up about the time the actor made her cry while filming the show.

"When you live with complete strangers in that environment, emotions are high anyway, so I’ll precursor with that," the 23-year-old told news.com.au.

"However, I just have never been forced to live with someone that just constantly was… I don’t know… I can’t even explain… constantly doing things to get us in trouble."

Sabrina went on to explain that Firass would say "one line comments" to her "every day".

Firass' comments eventually became too much.

"Just on that one day he got me and I just lost it... I’m a very honest person with my emotions and of course I don’t want to cry on camera but at the same time that’s how I felt at the time."

Sabrina said she was upset that Firass refused to accept responsibility for his actions, which ended up resulting in their castmates being punished.

"I think because he was so adamant that he hadn’t done anything wrong the whole time, that put me in a shock," she told the publication.

The 36-year-old did eventually apologise but by that point, Sabrina said "it didn’t mean anything".

"It took a while for him to apologise and I don’t know if he apologised to me because he meant it or because someone told him to, I don’t know."

"But by the time he did apologise, for me personally, it didn’t mean anything. I even said, ‘I appreciate your apology but just so you know, I don’t believe you'."

3. Kyle Sandilands gives a teary on-air apology to Ali Oetjen after making comments on her past.

In perhaps the most unexpected news of 2020, Kyle Sandilands has shown real remorse for the way he spoke about Ali Oetjen on his radio show a few years ago, and it was sort of... touching?

Last night, Ali Oetjen opened up on SAS Australia about how the way the media portrayed her affected her mental health, and chatting to Kyle and Jackie O this morning, Sandilands took his chance to apologise.

“I was watching it (SAS Australia) by myself on the chair at home and I teared up when you started crying because I thought, Jesus, I’m part of that culture that talked about you, shone the spotlight on things you might not have wanted to talk about,” he said.

☃️🌊I didn’t know that you could develop a deep fear of being cold, but when it’s this severe it’s so terrifying. Tonight’s episode is switching between mind strength & physical strength, its exhausting to say the least & breaking us down. #sasaustralia #mentalstrength #physicalstrength #warriors PS - Sabrina looking like the queen she is!

"I felt, for the first time ever, very remorseful about my part in that.

“I just wanted to let you know … I felt like a piece of s**t for doing what I did, because a lot of that s**t that people were talking about happened on this show, so I just wanted to say from where I am to you, that I regret that.

“I didn’t realise you were going through such a tough time.”

His co-host Jackie O jumped in to let Ali know that he was tearing up again and Kyle said:

"Yeah, it’s a s**t thing. It felt fun at the time but you don’t realise until you see someone getting emotional about it and you think, 'Oh, hang on a second, these are real people'."

“You forget sometimes people on TV are real human beings,” he said.

DMs between Bachelorette frontrunner, Frazer Neate and a mystery girl have been leaked, and look, while there's nothing too incriminating, this is not a good look.

The Wash released a photo from an anonymous source that was captioned: "When ya friend talks to the guy on Bachelorette," and showed the conversations over Instagram between Frazer and the girl.

Hometowns!!! Time for elly to meet my lovely mother, my best mate and my brother. Goodluck is all I’ll say!! #wizsdebut #bacheloretteau #bacheloretteau

The pair seem to be responding to each other's stories with what we can only assume as some sort of in-jokes, but you can be the judge of that and view the image here.

Maybe it's a friend?

Maybe it's his cousin?

We can only hope, because we're rooting for Elly finding love this year.

5.  A WAG and 'the best' year of being single: Zoë Foster Blake's dating life before Hamish.

Zoë Foster Blake is, without a doubt, one of those women who we not so secretly wish was our sister. She’s quick-witted, damn successful and is full of piping hot relationship advice that frankly we all need to hear.

However, prior to her becoming one half of Australia’s favourite couple (AKA Hamish Blake and Zoë Foster Blake), Zoë had a rather surprising dating history - where she spent a significant amount of time being a WAG.

When Zoë sat down (via Zoom) with Mia Freedman for an episode of No Filter, she dived into her dating life pre-Hamish.

So, here’s what we now know about Zoë Foster Blake’s dating life before Hamish. 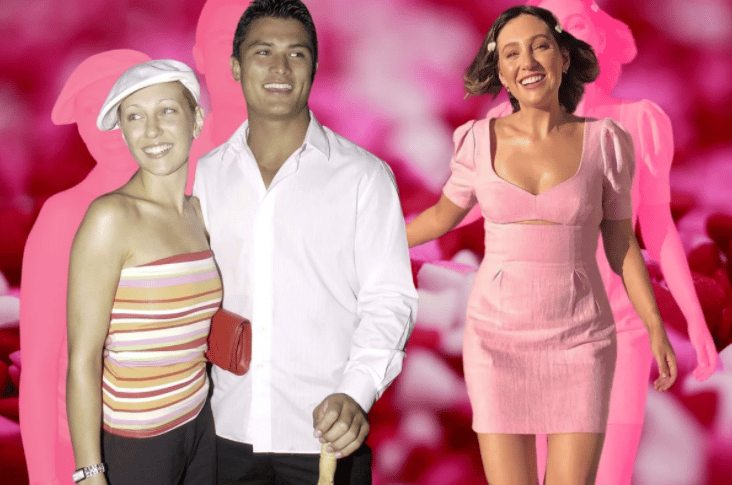 “I think when I met you, you were dating Craig Wing and you were a WAG before the word WAG was even a word. How did that happen?” Mia asked the Go-To Skincare CEO.

“The honest truth is that I was working as a promotional girl when I was 18 for Bensons & Hedges [the cigarette brand]. I was dead broke, I deferred uni and I had moved to Sydney, and I still don’t know why. I had not a dime, not a friend, moved into a share house from Bunadnoon and had a very lonely, strange year where I did night packing for Coles, telemarketing, the lot. And then some girls on the street asked me to do promo work, and I’m like, ‘20 bucks an hour? Oh yeah!’.

“So we would dress up in gold and hit the city on Friday nights and sell cigarettes in clubs and bars. And one of those nights where I was doing the 12am to 4am shift, where you’d have glow sticks on your tray and walk through clubs - and he was there. Minding all the coats for his friends, sober and bored. And we just got chatting.”

That chat led to a nine-year-long relationship with Craig, who was then a professional rugby league and rugby union player, playing for the likes of the South Sydney Rabbitohs, Sydney Roosters and Australia.

For more on Zoë's dating life before Hamish, read our earlier post here.

I felt, for the first time ever, very remorseful about my part in that.