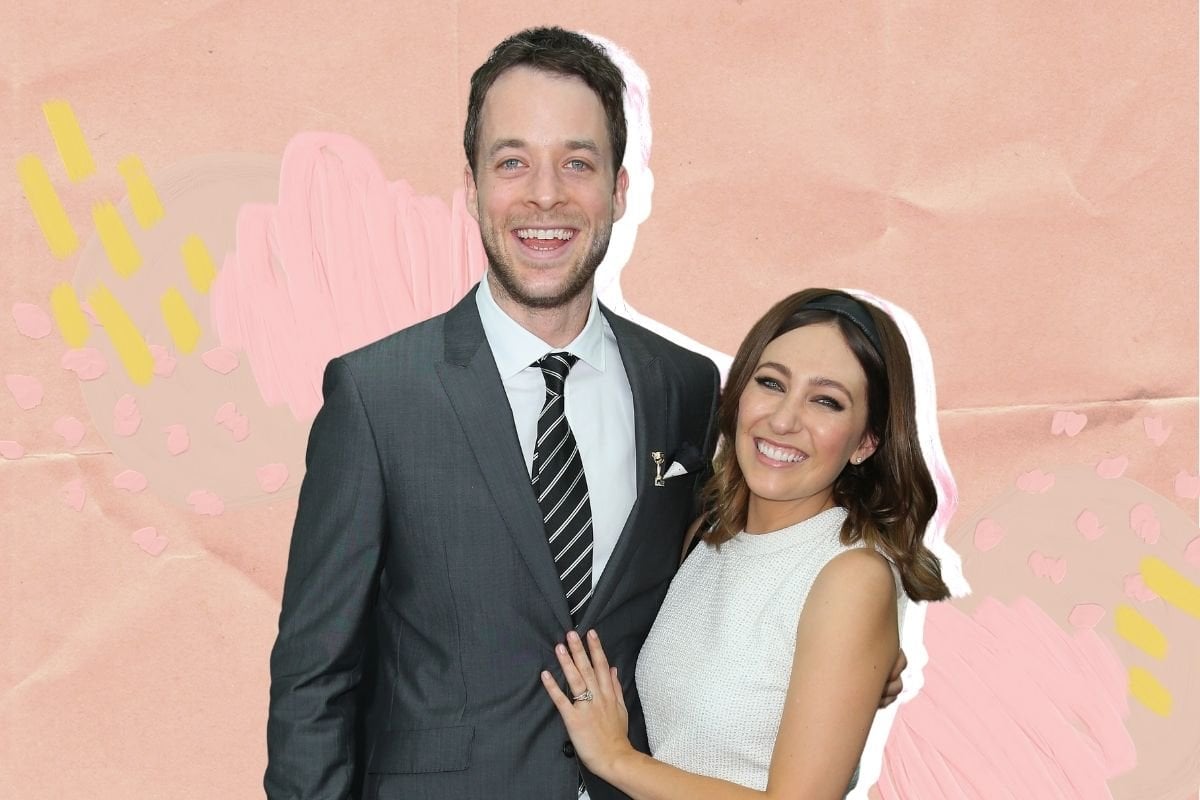 Zoë Foster Blake was in the beauty cupboard at Cosmopolitan when a book fell on her head.

Like something lifted from the script of an early 2000s rom-com, the swan-diving book was a self-help title filled with precisely the guidance she needed at that moment in her life.

It was called The Rules: Time-Tested Secrets for Capturing the Heart of Mr. Right.

"Basically, it's this idea of 'let them chase you. Think of yourself as a prize, and then everyone wins because someone feels like they won you and you feel like [you get to be with] someone that really wants you.'

"It helped me with my self-worth and self-esteem at a time when it was really low. So I think, sometimes, you just look for validation anywhere. And that for me was that [book]; it gave me the strength I needed at that point."

"It's a bit of a hideous book, I suppose," Foster Blake previously told Mamamia's No Filter podcast.

She was Zoë Foster then; a young beauty editor in the heady 2000s heyday of glossy magazines; a woman who spent the first decade of her adult life dating NRL star Craig Wing.

They'd met at 18 in a nightclub where she was working as a cigarette promo girl, broken up at age 23 for a little over a year, then were back together until 29.

Particularly in the first phase, Foster Blake imagined marrying Wing: "I was just assuming that that would be the way it would roll. Even though I think in my heart, I knew that I probably wouldn't be that happy."

The man who would ultimately make her so was already in her life.

"There was nothing romantic about it."

Radio presenter and television extraordinaire Hamish Blake became the man who would be alongside her as she went from columnist and blogger to founder of the Go-To beauty empire, who'd become her husband and the father of her two children, and with whom she would pen her own set of relationship rules: Textbook Romance.

"We met at a beauty function when I was 23 and he was 21," she said. "He and Andy [Lee] were hosting. And I just thought it was very funny straight up.

"I was very happily single and not at all interested, but we became very firm friends... There was nothing romantic about it."

The friendship continued throughout her relationship with Wing and Blake's with lawyer and actor Anna Jennings-Edquist. Then things shifted.

"I'd been single and gloriously wild and free for a year, and he had broken up with his partner. And I think I just realised that when he left Sydney, after we'd go out for dinner and have drinks, I was very sad.

"[I'd think] 'That's a weird feeling. I don't usually feel like that when I've had dinner with another friend; I didn't think about them or the next day.' So it was a slow unfurling and figuring it out."

A few awkward conversations followed as they began to gently reshape their relationship.

For more from Zoë's chat with Mia Freedman, listen to No Filter.

"Someone would put a little foot forward and say, 'been missing you' or 'thinking about you', or something like that. And that would open the space for a bit more.

"But we wanted to take it slow, because we didn't want to get it wrong. And quite frankly, at that point, the idea of kissing him was just weird. And I didn't know if it would work. Because I mean, he'd been my mate, for a long time. I'd clearly compartmentalised him in that in that world."

Eighteen months after they started dating, they were engaged. Another 11 and they were married.

"You know what? I really rate having a strong friendship and respect and admiration for each other before the physical develops, because it's all in place," she said. "Then you just have to figure out if you like kissing them."

As Foster Blake wrote in her book LOVE!, when you are with 'the right person' life is easy: your time together is easy.

"The need for constant analysis and calculating and predicting and wondering is negated; the cyclical questions and conjecture and conversation that usually accompany a new lover become obsolete. Things feel right, because you are at peace. Finally, the incessant cacophony of gut and head and past and future ends, and all that is left is a big smile and calm and lots of adorable handholding and visiting Instagrammable cafes for hotcakes."

In 2012, they married. Foster Blake wore a custom-made Steven Khalil gown and Givenchy heels and Hamish in a Patrick Johnson suit. The couple had only 22 guests at the intimate wedding ceremony, which was held at Wolgan Valley in NSW, just north of the Blue Mountains. And they had a Snickers cake.

In 2014, the couple welcomed their son Sonny into the world.

At the time, Blake said on radio: "Zoë's great, she's taken off for a girl's getaway on the Goldie, I'll look after the kid…" he joked. "Really though, it is just an amazing thing to watch your wife go through. She was a champion. She's recouping and sleeping now."

Hamish described Sonny as "nothing but perfect" and "phenomenal" too.

Of course, one of the major traditions the Foster Blake family have is that every year on the night before his children's birthdays, Blake will stay up to the wee hours of the night to make his kids the cake of their choice.

And he documents the entire process on his Instagram story. And it's iconic. As the years have gone by, the cakes have gotten more and more extravagant. But fuelled by whiskey, Blake somehow manages to pull it off. Every single time. To see Mamamia's rankings of the cakes - they're all pretty cool - you can click here.

As for what life looks like now for the family, they're having an icons moment currently.

Blake just won the Gold Logie, and also scored the award for the Most Outstanding Entertainment or Comedy Program for Lego Masters and the Bert Newton Award for Most Popular Presenter.

Back in late 2020, she sold an $89 million stake in her skincare business to beauty and wellness group BWX (the company who own brands including Sukin and Andalou Naturals).

"When we embarked on this process we wanted a compatible, like-minded partner who was culturally aligned, shared our values on sustainability, inclusivity and quality, really 'got' our brands, and who could assist in unlocking Go-To's international potential," Foster Blake said at the time.

"BWX immediately made sense. They live and breathe skincare and have a proven track record globally."

As the founder and chief creative officer, Foster Blake still plays a key role, with the brand recently launching a new product, the Very Lightweight Moisturiser.

Foster Blake and Blake also relocated to Sydney during the pandemic, saying the decision was related to their careers and business opportunities.

Writing on Instagram she said: "Go-To, the company I started in Sydney (and then almost immediately moved to Melbourne), is rapidly growing and needs me, and I am so excited to be near my family and the sea once more. There are so many places I can't wait to take my kids (the Blue Mountains! Kiama! Burrawang pub!) and things I will lovingly force them to do as per my childhood."

She continued: "But oh, I will miss and mourn Melbourne deeply. I feel an immense bond to this city and the people within. I love Melbourne SO hard. It's a brilliant, creative, warmhearted, innovative and beautiful city. I shall return often with much joy and a long list of people and restaurants I adore and need to see. Get ready Sydney. We're coming for you."

Reply
Upvote
3 upvotes
Lovely person but listening to No Filter did make it stand out to me that she still did/does have a filter. She's a very guarded person and it didn't feel like we learned anything new. She's keen to present the shiny side (which is totally fine and her right!) I'm not judging it. But just in the format of No Filter interviews it stood out a little how prepared Zoe seems with answers that she's happy to share. It makes sense! And I hope I don't sound like I'm judging, I do love a No Filter where the conversation gets a bit more real though.
News
General
Opinion
True Crime
Politics
Sport
Explainer
Entertainment
Celebrity
Reality TV
Movies
TV
Books
Rogue
Royal
Lifestyle
Beauty
Fashion
Weddings
Home
Wellness
Health
Fitness
Travel
Food
Family
Before The Bump
Pregnancy
Baby
Kids
Teens
School
Parent Opinion
Work & Money
Money
Finance
Career
Lady Startup
Relationships
Sex
Dating
Separation
Friendship
Family
Real Life
Couples