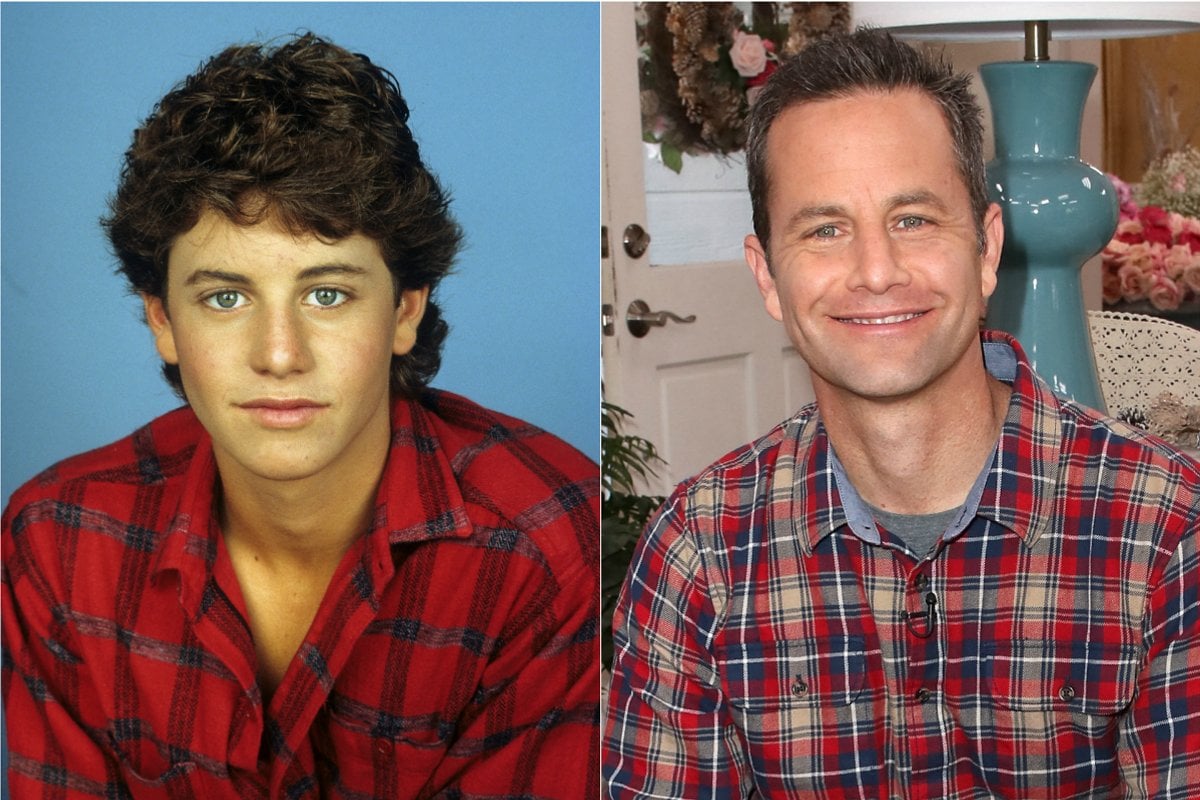 In the late 1980s, Kirk Cameron was a household name thanks to his heartthrob status. As a teenager, he was the archetypal pin-up, adored by young girls across the world.

Cameron was the former star of Growing Pains, playing Mike Seaver for the sitcom’s seven seasons between 1985 to 1992. He starred alongside a young Leonardo DiCaprio, and a then-unknown Brad Pitt who made a couple of guest appearances. 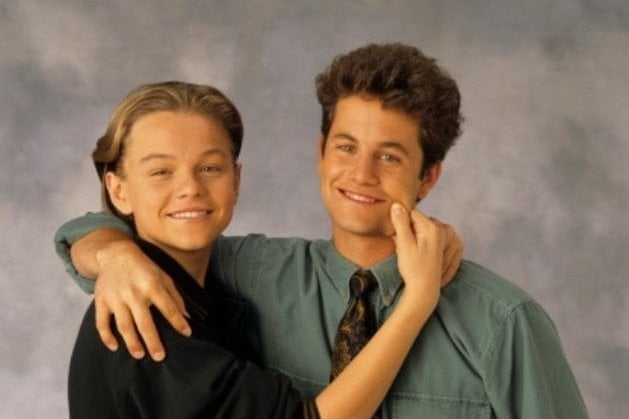 But as soon as the show was cancelled, Cameron’s career took a turn and his public image has shifted immeasurably in the nearly 30 years since the end of Growing Pains. Here’s where he is now.

When Cameron was first catapulted into mainstream fame, he was a “staunch atheist” who thought he “was just too smart to believe in a fairy tale like that,” he later wrote in ‘How Do You Know He's Real’.

During the height of his career while on Growing Pains, he became a born-again Christian.

"I had everything that I wanted. I had as much money as I wanted to spend. I was travelling around the world meeting famous people. I was a famous person… But I met a man, who was the father of a girl that I liked, and I got to talking to this man, and he said, 'There’s still something that you don’t have, though, Kirk. You have a lot, but you don’t have the Lord'." 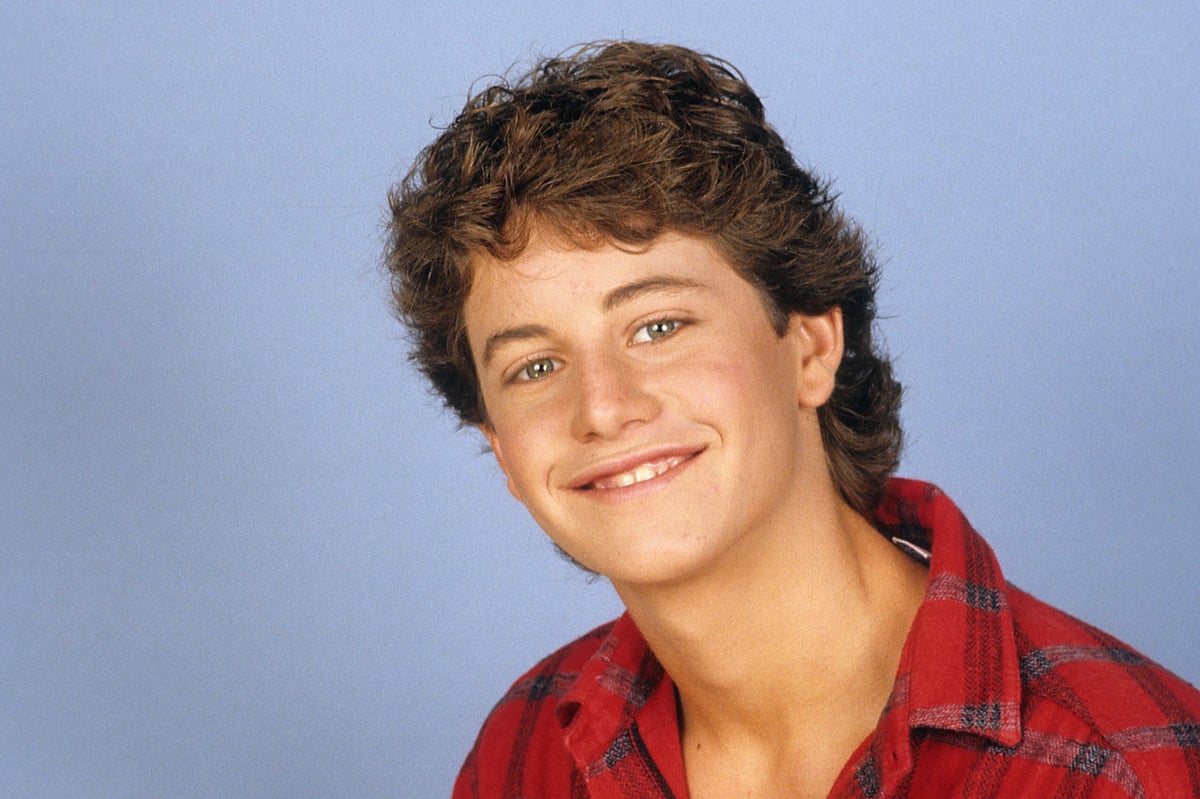 That one conversation ultimately sparked his curiosity and led to his conversion to Christianity, he explains. His religious path saw him isolate himself from his co-stars before the show was cancelled in 1992. Cameron did not keep in contact with his former colleagues.

“I definitely kind of made an about-face, going toward another aspect of my life,” Cameron told Los Angeles Times in 2000. “I shifted my focus from 100 per cent on the show, to 100 per cent on [my new life], and left 0 per cent on the show - and even the friendships that were a part of that show. If I could go back, I think I could make decisions that were less inadvertently hurtful to the cast - like talking and explaining to them why I just wanted to have my family at my wedding.”

After converting to Christianity at the age of 17, Cameron fell in love with his Growing Pains co-star and on-screen girlfriend, Chelsea Noble. 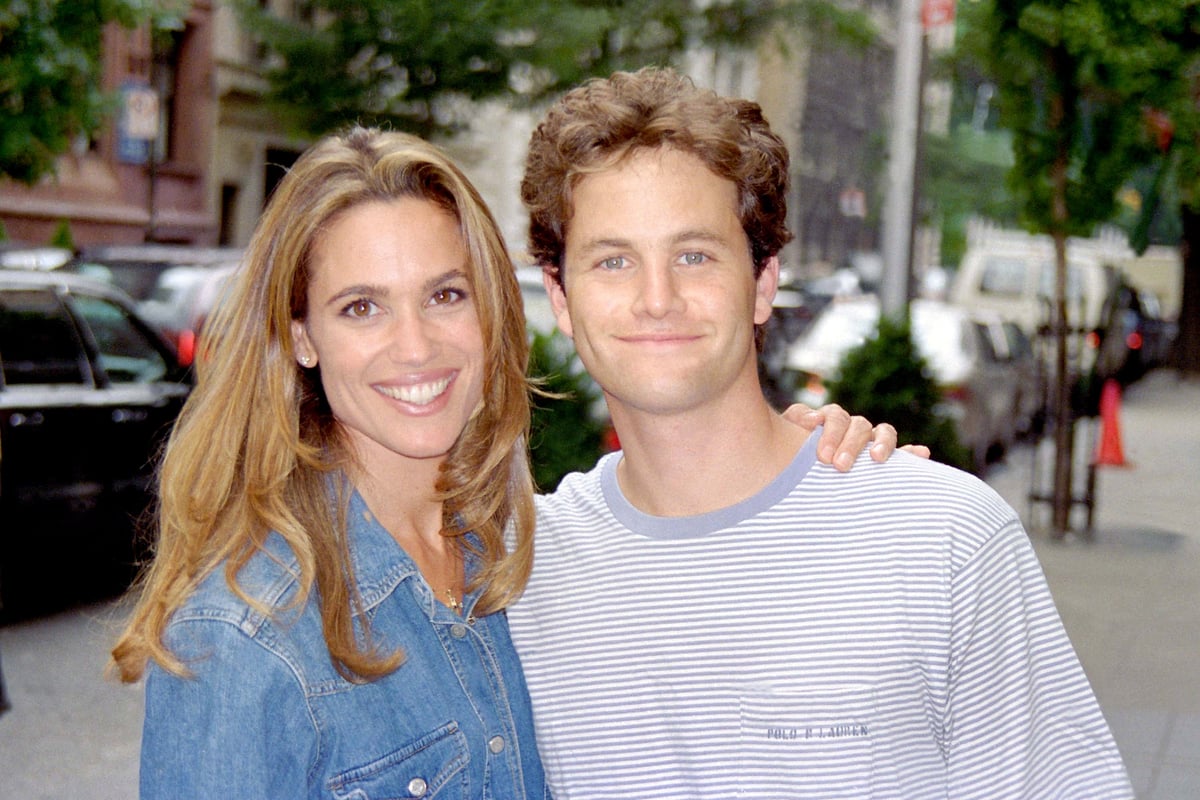 In 1991, the pair married when Cameron was 20 and Noble was 26. Nearly 30 years later, the pair are still married and have six children together, four of whom are adopted.

Cameron has spoken about his “commitment to not kiss any other woman,” other than his wife on screen. If a acting role requires a kissing scene, his wife will dress up as the respective female and filmmakers will shoot the scene in silhouette, according to an interview he did with USA Today.

In 2016, Cameron shared his conservative views on marriage, telling Christian Post: “Wives are to honour and respect and follow their husband's lead, not to tell their husband how he ought to be a better husband...

"A lot of people don't know that marriage comes with instructions. And, we find them right there in God's word."

The response was an avalanche of criticism - something he’s become used to since stepping off the Growing Pains stage. 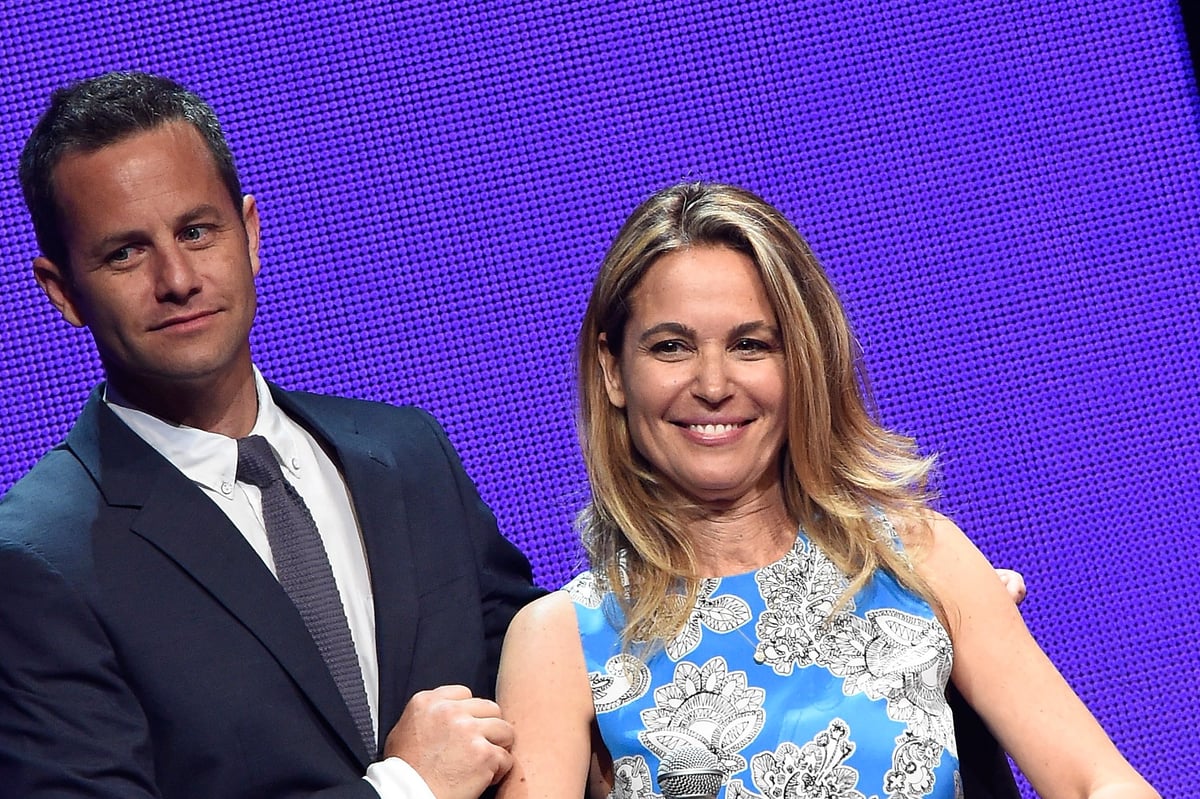 Kirk Cameron with his wife Chelsea Noble in 2015. Image: Getty.

Over the years, Cameron has been at the centre of a slew of controversies surrounding his staunchly conservative viewpoints.

From his innocuous belief that the ‘perfect’ design of a banana - yes, the fruit - is proof of God’s existence, to his dangerous standpoint that homosexuality is “destructive”, the actor has publicly peddled his controversial perspectives for decades, despite the great level of backlash he receives every time.

Infamously, Cameron sparked controversy for his homophobic views in 2012, when he expressed them during an interview on CNN's Piers Morgan Tonight.

"Marriage is almost as old as dirt, and it was defined in the garden between Adam and Eve,” Cameron said. “One man, one woman for life till death do you part. So I would never attempt to try to redefine marriage. And I don't think anyone else should either," explains Cameron. "So do I support the idea of gay marriage? No, I don't.”

The actor continued, calling homosexuality “unnatural...  detrimental, and ultimately destructive to so many of the foundations of civilisation.”

In the same interview, Cameron said abortion was “wrong under any circumstances”.

Journalist Piers Morgan - no stranger to media storms himself - later tweeted: “I don't think this Kirk Cameron interview went entirely how he thought it would… #CNN”

I don't think this Kirk Cameron interview went entirely how he thought it would... #CNN

Advocacy organisation GLAAD launched a petition in response to the interview, titled: 'Tell Kirk Cameron It's Time to Finally Grow Up'.

Alan Thicke, who played Cameron’s dad on the 80s sitcom, tweeted: "I'm getting him some new books. The Old Testament simply can't be expected to explain everything."

Tracey Gold, who played Cameron's sister, responded via Twitter: "I am a strong supporter of the #LGBT Community, and I believe in equal rights for all. #NOH8 #LOVE."

I am a strong supporter of the #LGBT Community, and I believe in equal rights for all. #NOH8 #LOVE

She also gave an interview to E! Online, saying she “wanted to distance [herself] from those comments.”

"I think it's so important for every one person who is negative, that we are louder with love and support."

Cameron issued a statement, apparently confused why “some people believe my responses were not loving toward those in the gay community”.

"That is not true," he continued. "I can assuredly say that it's my life's mission to love all people."

GLAAD deplored his statement, saying: “Cameron used his platform to attack gay Americans and is now attempting to play victim in an effort to sell his upcoming movie.” (At the time, he was promoting his documentary, Monumental: In Search of America's National Treasure.)

Cameron’s career took a completely separate turn to that of his former fellow castmates. He has continued acting, although only in films that promote his evangelical belief.

In 2008, he played Caleb Holt in the drama film Fireproof, which is about a firefighter who saves his marriage by turning to God. As the New York Times said in their review of the film, “it hardly sounds like a recipe for box office success, let alone a best-selling book. But that’s what the film ‘Fireproof’ has spawned”.

Alas, his next film was not as successful.

In 2014, Cameron starred in Saving Christmas, which is a film about a man named Christian who is concerned that Christmas has become too materialistic and too far removed from the Bible. So he tries to save it, by putting the “‘Christ’ back in ‘Christmas’”.

The film received a zero per cent rating on Rotten Tomatoes and was voted the "worst movie ever" by IMDb users. In the Razzies - a sarcastic annual award show honouring the worst of film - Saving Christmas received four wins in the categories of worst picture, screenplay, actor and screen combo, which went to Cameron "and his ego," according to CNN.

Indeed, the once-Hollywood heartthrob has managed to transform his early career success into one that is now synonymous with controversies and critically-slammed films.

Reply
Upvote
It's controversial for a Christian to believe the bible's teaching on marriage and homosexuality? Gee! I've gotta get out more!
In Christian circles it's way more controversial to *not* subscribe to the teaching of the Bible - it being, like, the main text and all.
fightofyourlife 2 months ago

Reply
Upvote
2 upvotes
@kathp There are plenty of Christians who interpret the Bible differently than you do. The fact that you've never heard of them suggests that yes, you do need to get out more.
m.b.20 2 months ago

Reply
Upvote
2 upvotes
@kathp I would have to say the majority of Christians I know are aware that the Bible is a product of its time and that it can, and should, be interpreted in a way that moves with the times. It's controversial because he is fundamentalist and fundamentalism in Christianity is seen as 'kooky' and 'funny' but fundamentalists in other religions are seen as scary.  I watch TV such as the duggars and they are also billed as being weird, but they're actually really scary.
Christian beliefs and understanding of the world changes all the time. Would you like to go back to before the reformation? I want my friends who hold a God in their hearts to be able to reconcile the social progress with their love of their God. And by looking at the bible as the text and that it can't be changed means that this would not be possible.
If you would like to rely on the bible, I'll have to refer to the oft cited Leviticus which also instructs people not to mix materials in their clothes, that anything a woman touches during her menses is unclean (even if the blood doesn't come into contact with it), no one should eat hare or pig, sets out tithing,  and lots of rules about leprosy.  Should they be read literally in 2020?
cat 2 months ago

Reply
Upvote
2 upvotes
@kathp it’s controversial to openly spread hate speech and bigotry. Fortunately most Christians have moved beyond that. Jesus wasn’t huge on it either.
kathp 2 months ago

Reply
Upvote
@fightofyourlife where did I say I'd not heard of Christians who don't believe what the Bible says?
rush 2 months ago

Reply
Upvote
2 upvotes
I had to Google the banana thing (reeeeally need to figure out how to delete my browser history on this phone), and honestly, it's (inadvertantly) the funniest damn thing I've seen in months. The argument is that the banana could only have been created by God because the shape of it fits our hand so perfectly, and the tip is, and I quote, "pointed for easy insertion". If you google 'Kirk Cameron banana argument', it will take you to a YouTube video of some pastor guy explaining it all to Kirk. Apparently neither of them have heard of selective breeding, or seen pictures of what bananas used to look like.
cat 2 months ago