1. Oh. It turns out Bachelor in Paradise's Alex regrets giving his rose to Keira.

In case you missed it, Alex McKay decided to give a "friendship rose" to Keira Maguire instead of pursing things with fellow contestant Keely Spedding.

But now, Alex says he regrets his decision after hearing what Keira had to say about him behind his back.

"You see people’s true colours in that room when no one is around. They can blame it on editing but you say what you say. It shows who the really nice people are when they are talking behind your back," he told The Courier Mail.

Alex said that he thought he was making the right decision at the time because he didn't feel a connection with Keely or Cass Mamone.

"I did say if it came down to a friendship rose I’d be picking [Keira] and I am a man of my word."

I’m freeeeee and single! 😂 Thankyou everyone for making my experience on paradise one not to forget. I read everyone’s comments and DMs , sorry I can’t write back to you all but just want to say I appreciate all of you! My quest to find my first love didn’t workout but my time in paradise was honestly amazing! I’m happy you all got to see every part of me on this series. Let’s see if I can find the one without putting it on display to Australia 😂 if not you may see me again 😏 Thanks again everyone, looking forward to showing you all my life through the gram! ❤️❤️

Alex also told the publication he would be keen to appear on reality TV again. But next time around, he might not swim onto the show as part of his entrance.

"I thought with the power of TV they would make it look like I swam in," he said about his entrance on Bachelor in Paradise.

"But they got a kayak and took me out 150 metres. I was gassed. I was more worried about getting there alive."

Bachelor in Paradise continues tonight at 7.30pm on Channel 10.

Listen to The Spill, Mamamia's daily entertainment podcast. In this episode, Kee Reece and Laura Brodnik chat about the book that apparently details the ins and outs of Meghan and Harry's lives. Post continues below.

2. Apparently Timm's new girlfriend made him block Brittany after Bachelor in Paradise.

Earlier this week, we watched as Timm Hanly and Brittany Hockley left Bachelor in Paradise together only to find out they broke up just weeks afterwards.

Timm has since confirmed he's back dating his ex-girlfriend, who he says he began dating again a couple of months ago.

"This was the girl I was with for six years before The Bachelorette," Timm told Hobart’s Hit100.9 Jimmy & Nath.

But now it seems not everything is well between Brittany and Timm's new girlfriend.

Speaking to Pedestrian, Brittany explained that she made Timm block her from social media.

"We were not speaking, there was nothing going on with us, and then he blocked me on social media for no reason. He has since told me that it was his girlfriend that made him do it," she told the publication.

"She’s really insecure about it, which she has absolutely no reason to be. I’ve never contacted him again, we didn’t speak on social media, and I was really quite offended by that. I just thought, 'You’ve got no respect."

She went on to say that she's moved on and she's happy Timm is happy.

"We’ve both moved on and I haven’t thought about him like that in a long time. When someone behaves that way, it’s pretty easy to move on, but I want to move on from the whole franchise right now. Now that’s done, I just want to get on with my life."

3. "He doesn't have a malicious bone in his body." Brittany Hockley defends Jamie Doran.

When Brittany Hockley sat down on her podcast Life Uncut this week, her co-host Laura Byrne had some questions about her time on Bachelor in Paradise. One question in particular was: "Were the edits actually as bad as everyone's been saying?"

Brittany explained that in most cases, the edits that appeared on our screens were fairly accurate. However, when it came to Jamie Doran, she explained that his edits were "too much" and "not fair."

A post shared by Bachelor In Paradise Australia (@bachelorinparadiseau) on Jul 22, 2020 at 4:16am PDT

"Jamie has copped a lot of heat for constantly wanting to give out roses. I even laughed at him on the show," she told Laura.

"But if you actually look at what he's doing, and you listen to what he's saying, he doesn't actually have a malicious bone in his body."

She continued to elaborate on Jamie's behaviour and said, "The reason he's offering everyone his rose is because he talks to them, his heart breaks for them, he's very empathetic, and he feels for them.

"He's like, 'Look don't worry, we'll sort it out. I'll get you a rose!' But he doesn't think how he's going to sort it out [long term]. He just wants to make this person feel better in the moment."

A post shared by Bachelor In Paradise Australia (@bachelorinparadiseau) on Jul 21, 2020 at 5:58pm PDT

"You can go back and see the whole thing again, you don't see Jamie saying anything bad about anyone," she continued.

"His edit is that he's too emotional, too caring. Too caring for everyone. He's been thrown under the bus for what? Loving Timm too much? They just adore each other!

"Yeah the man cries, so what? As a nation, we're always encouraging men to be open, vulnerable and emotional – and then as soon as someone does, this is what we do to them!"

Since the episodes of Bachelor in Paradise aired, Jamie Doran has announced that he will be taking legal action against Warner Bros. and Channel 10 over his negative portrayal.

Everyone remain calm but it looks like our early '00s reality TV dreams are coming true.

Laguna Beach star Kristin Cavallari has reunited with her teen love Stephen Colletti on social media. Uploading a photo to her Instagram, Cavallari captioned it, "2004 or 2020?"

If you need a quick refresher, Cavallari dated Stephen Colletti on the reality TV show Laguna Beach back in 2004. Their on and off romance was a prominent storyline across the three seasons.

In recent years, Colletti was set to appear on Cavallari's TV show Very Cavallari, however, that never came to fruition.

While the photo of them does look quite close, especially now that we know her and husband Jay Cutler have called it quits, the pair aren't rekindling their relationship.

According to ﻿TMZ﻿, the pair have simply remained close friends since their split.

For almost two decades, Ellen DeGeneres' good-natured talk show has made her one of America’s most loved TV personalities. But in recent years, rumours have circulated that in real life, the 62-year-old isn't quite how she comes across on screen.

Recently, the stories and allegations started escalating so much that DeGeneres’ wife, Portia de Rossi, had to come to her defence, this week posting "I Stand By Ellen" on Instagram. So what exactly are people saying about DeGeneres, and how did it all begin? 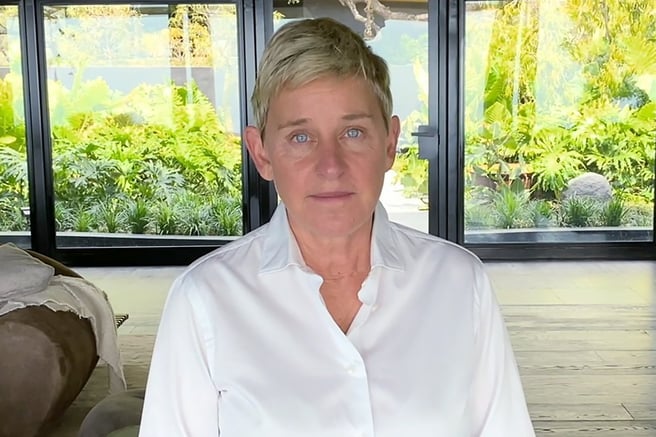 DeGeneres was labelled "Ellen DeGenerate" by televangelist Jerry Falwell and conservatives put pressure on advertisers to boycott the sitcom. It was axed the following year, and DeGeneres spent several years without a regular TV gig.

The Ellen DeGeneres Show premiered at a time when other stars, such as Sharon Osbourne, were also launching talk shows. But DeGeneres’ became a hit, thanks largely to the host’s super-nice persona. The show was generous with its giveaways and had the mantra, "Be kind to one another."

For more on The Ellen DeGeneres Show drama, read our earlier article here.