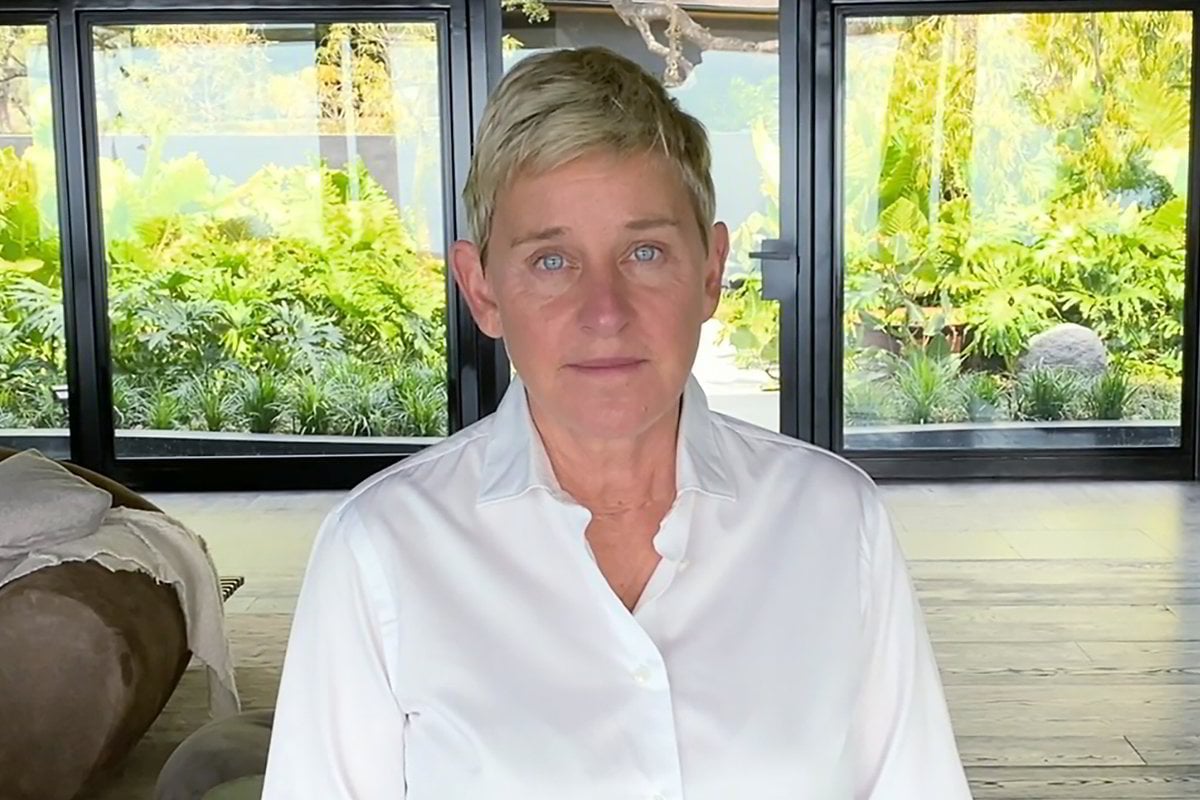 For almost two decades, Ellen DeGeneres' good-natured talk show has made her one of America’s most loved TV personalities. But in recent years, rumours have circulated that in real life, the 62-year-old isn't quite how she comes across on screen.

Recently, the stories and allegations started escalating so much that DeGeneres’ wife, Portia de Rossi, had to come to her defence, this week posting "I Stand By Ellen" on Instagram. So what exactly are people saying about DeGeneres, and how did it all begin?

DeGeneres was labelled "Ellen DeGenerate" by televangelist Jerry Falwell and conservatives put pressure on advertisers to boycott the sitcom. It was axed the following year, and DeGeneres spent several years without a regular TV gig.

The Ellen DeGeneres Show premiered at a time when other stars, such as Sharon Osbourne, were also launching talk shows. But DeGeneres’ became a hit, thanks largely to the host’s super-nice persona. The show was generous with its giveaways and had the mantra, "Be kind to one another."

For years, the rumours that DeGeneres wasn’t as nice off-camera as on-camera circulated through showbiz circles, but they remained nothing more than tabloid stories relying on anonymous accusers. DeGeneres addressed the rumours in a 2018 profile in The New York Times.

"That bugs me if someone is saying that because it’s an outright lie," she said. "The first day I said: 'The one thing I want is everyone here to be happy and proud of where they work, and if not, don’t work here.'"

The profile also touched on how hard it was for DeGeneres to constantly live up to her super-nice, goofy-dancing persona in real life.

"The talk show is me, but I’m also playing a character of a talk-show host," she admitted. "There’s a tiny, tiny bit of difference."

DeGeneres had a bad year last year, with a string of incidents leading to backlash against her. First, she defended Kevin Hart when he lost the gig as Oscars host over his homophobic comments. Next, she was criticised for her friendship with former US President George W. Bush.

Then came the super-awkward Dakota Johnson interview, where DeGeneres jokingly questioned why she wasn’t invited to Johnson’s 30th birthday party.

"Actually, no, that’s not the truth, Ellen, you were invited," Johnson responded. "No, last time I was on the show, last year, you gave me a bunch of s*** about not inviting you, but I didn’t even know you wanted to be invited.

A back and forth followed in which Johnson’s producers confirmed the invite, prompting DeGeneres to say that she was "out of town" on the day.

The interview launched a string of memes that led to claims that Johnson had single handedly "brought down Ellen".

The floodgates had been opened. In March, podcast host Kevin T. Porter tweeted that DeGeneres was "notoriously one of the meanest people alive", and asked people to post the "most insane" stories they’d heard about her being mean, promising to donate to a food bank in return. The post got thousands of comments, some coming from people who claimed to have met her or knew people who had worked with her.

Right now we all need a little kindness. You know, like Ellen Degeneres always talks about! 😊❤️

She’s also notoriously one of the meanest people alive

"My sister worked for the Ellen Show for two years," one user, The Nude Eel, posted. "This is from her: 'I saw Ellen in the hallways every day and would say hello and she never once said hello back. She wouldn’t smile. She wouldn’t even acknowledge me at all. For two seasons.'"

However, others were clearly made up for a laugh.

"Ellen hides in parking lots under cars at night and slashes people's Achilles tendons as they walk past," one Twitter user jokingly claimed.

Among all the negative stories, there were also stories of DeGeneres being nice to work with.

Other people started coming forward with their allegations in the media. Tom Majercak, who was hired to be DeGeneres’s bodyguard at the 2014 Oscars, told Fox News her behaviour on that occasion had "bugged" him for years.

"Ellen is the one person that I've been assigned to – and I've been assigned to quite a few celebrities – that has never taken the time to say hi to me," he said. "I see this person come across as being very enlightened and positive and awesome and everybody loves her and is in awe and that's really not the case when you meet her in person."

Listen: The Mamamia Out Loud team discuss why Ellen DeGeneres is on the receiving end of a pile on. Post continues below.

Things shifted to a new level last month when BuzzFeed News published claims of a "toxic work culture" on the talk show. One current and 10 former employees were quoted anonymously, most making complaints about executive producers and other managers rather than DeGeneres herself. A black woman claimed she’d experienced racist comments, including one writer telling her, “I’m sorry, I only know the names of the white people who work here,” and other co-workers awkwardly laughing it off.

Another former employee told of taking a month of medical leave to check into a mental health facility following a suicide attempt. They claimed the week they returned to work, they were told their position was eliminated.

"You'd think that if someone just tried to kill themselves, you don’t want to add any more stress to their lives," the former employee said.

Another BuzzFeed News story later in the month ran detailed allegations of sexual harassment and misconduct by executive producers.

Last week, DeGeneres made an apology to her staff. She said an investigation had begun and steps would be taken to correct the issues.

"As we’ve grown exponentially, I’ve not been able to stay on top of everything and relied on others to do their jobs as they knew I’d want them done," she said. "Clearly some didn’t. That will now change and I’m committed to ensuring this does not happen again."

She said she was being misrepresented by people who worked for her.

"As someone who was judged and nearly lost everything for just being who I am, I truly understand and have deep compassion for those being looked at differently, or treated unfairly, not equal, or – worse – disregarded. To think that any one of you felt that way is awful to me."

But the public criticism of DeGeneres continues. Everybody Loves Raymond star Brad Garrett, who has appeared on The Ellen DeGeneres Show six times, tweeted, "Sorry but it comes from the top @TheEllenShow. Know more than one who were treated horribly by her. Common knowledge."

Sorry but it comes from the top ⁦@TheEllenShow Know more than one who were treated horribly by her.⁩ Common knowledge. DeGeneres Sends Emotional Apology to Staff - Variety https://t.co/D0uxOgyyre

De Rossi is now appealing to everyone who loves DeGeneres.

"To all our fans… we see you," she wrote on Instagram. "Thank you for your support."

Her hashtags include "#stopbotattacks" and DeGeneres’s famous mantra, "Be kind to one another."

Cancellation rumours and a "new host".

After BuzzFeed News published claims of a "toxic work culture", WarnerMedia launched an internal investigation into the long-running series.

According to People, WarnerMedia said in a statement last week that it was "disappointed that the primary findings of the investigation indicated some deficiencies related to the show’s day-to-day management".

Amid the internal investigation, rumours have begun circulating that the show may be cancelled.

On Monday, however, an executive producer denied the allegations.

When a Twitter user suggested that the show might go off the air soon, Andy Lassner responded: "Nobody is going off the air".

I seriously wish you well. If the Ellen show goes off the air due to all these allegations (I, personally, have stopped watching) I hope you are able to find employment quickly. Your twitter account always made me laugh. But we do disagree on one thing: #GoHabsGo

Nobody is going off the air.
And #GoKingsGo

While rumours of a cancellation have been shut down, some tabloids have claimed that Late Late Show host James Corden is "in line" to replace DeGeneres.

The Sun reported that Corden, 41, has long been seen as DeGeneres' "long-term successor".

"James Corden was being eyed for Ellen's job in the long term before any of this came to light," the source claimed.

"Currently his CBS deal is only contracted until 2022 after he turned down a five year deal."

According to the Daily Mail, DeGeneres reportedly told executives at Warner Bros that she's ready to walk away from the show.

"She feels she can’t go on and the only way to recover her personal brand from this is to shut down the show," a source told the publication.

Reply
Upvote
1 upvotes
I personally cannot stand the show and I have never understood people raving over how great Ellen is.  I don’t find her remotely funny or entertaining.  It’s good to see her shitty behaviour called out.
G
gu3st 2 years ago

Reply
Upvote
3 upvotes
Like many of us, I judge people by the way that they treat people that have to defer to them, eg. employees, hospitality and retail workers, etc. and I dislike Ellen's behaviour as it has been described. Ellen's pretty safe from me boycotting, as I've never watched.
For reasons that I can't explain, I can't warm to James Corden at all. I think that would be a turn for even worse for a show named "Ellen".
R
random dude 2 years ago