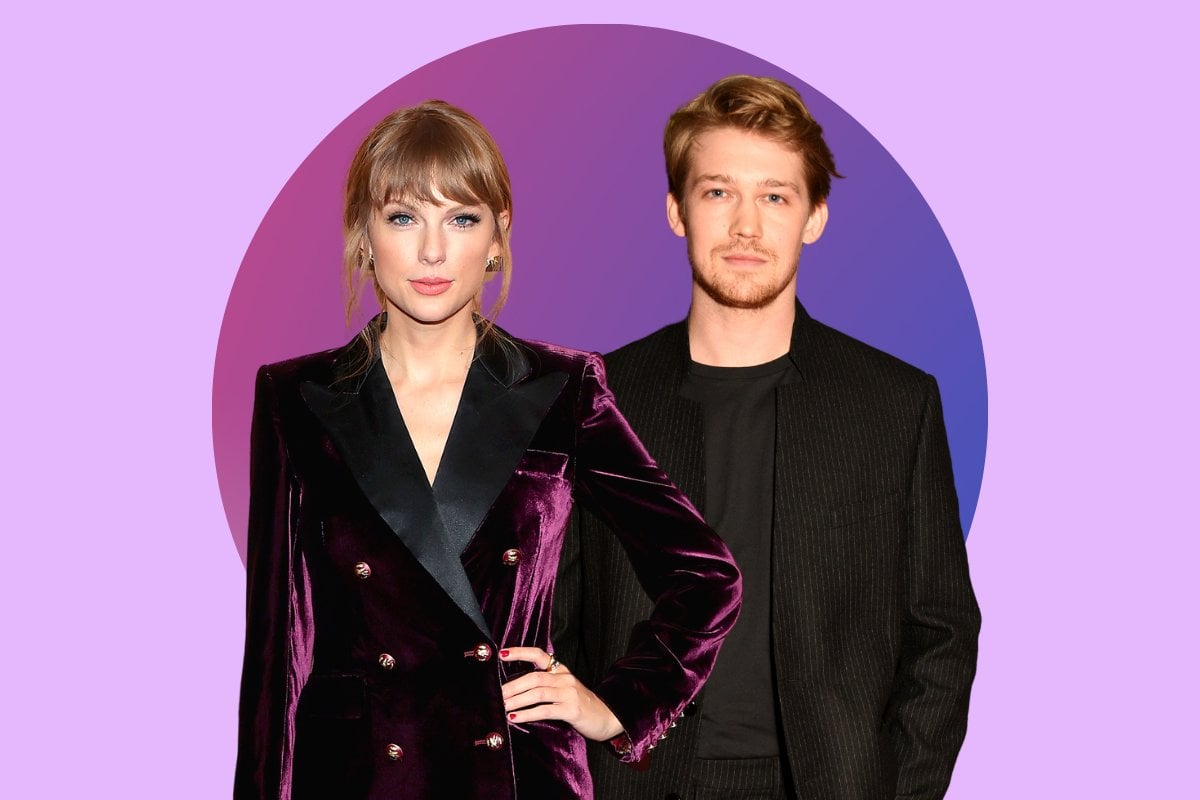 Joe Alwyn lives in the weirdest of paradoxes.

The man is, on one hand, an extremely low-key actor with several supporting roles under his belt and a new, exciting lead role in a buzzy TV show.

What does the public know about him? Well, let's see. He's blonde, he's British, and he stars as the very grunty, frustratingly closed off Nick Conway in Prime Video's Conversations With Friends, the 12-part TV adaptation of Irish author Sally Rooney's debut novel.

On the other hand, Joe Alwyn is dating one of the most famous women in the world.

This means that for a subset of people, he's a household name. He has been for close to six years. These people know he likes rugby, that he's good at piano and once, he accidentally began performing something at home that would eventually see him win an Album of the Year Grammy.

These people also know he worked at a yoghurt shop when he was younger, and that his brother has a blue wall. Such is the specificity of Taylor Swift lyrics.

Alwyn, 31, and Swift, 32, met in May 2016. While unconfirmed, the meeting most likely happened at that year's Met Gala. Swift was a co-chair and Alwyn was there, fresh faced and mostly unknown: his first film, where he played the title character in Ang Lee's Billy Lynn's Long Halftime Walk, hadn't even been released yet.

The timing of their meeting is important because it helps to explain exactly why we know so little about their relationship - besides what we have learned from the more than 20 songs that are absolutely about just that.

Between that first meeting and them officially becoming a couple in September that year, Swift's public persona was completely upended.

There was the Calvin Harris breakup. There was the whirlwind, rebound summer romance with Tom Hiddleston, and that infamous 'I <3 T.S' shirt on the Fourth of July. And there were the millions of snake emojis, the edited Kim Kardashian and Kanye West Snapchat video, the #TaylorSwiftIsOverParty and even a mural painted 'in loving memory', like she'd died. 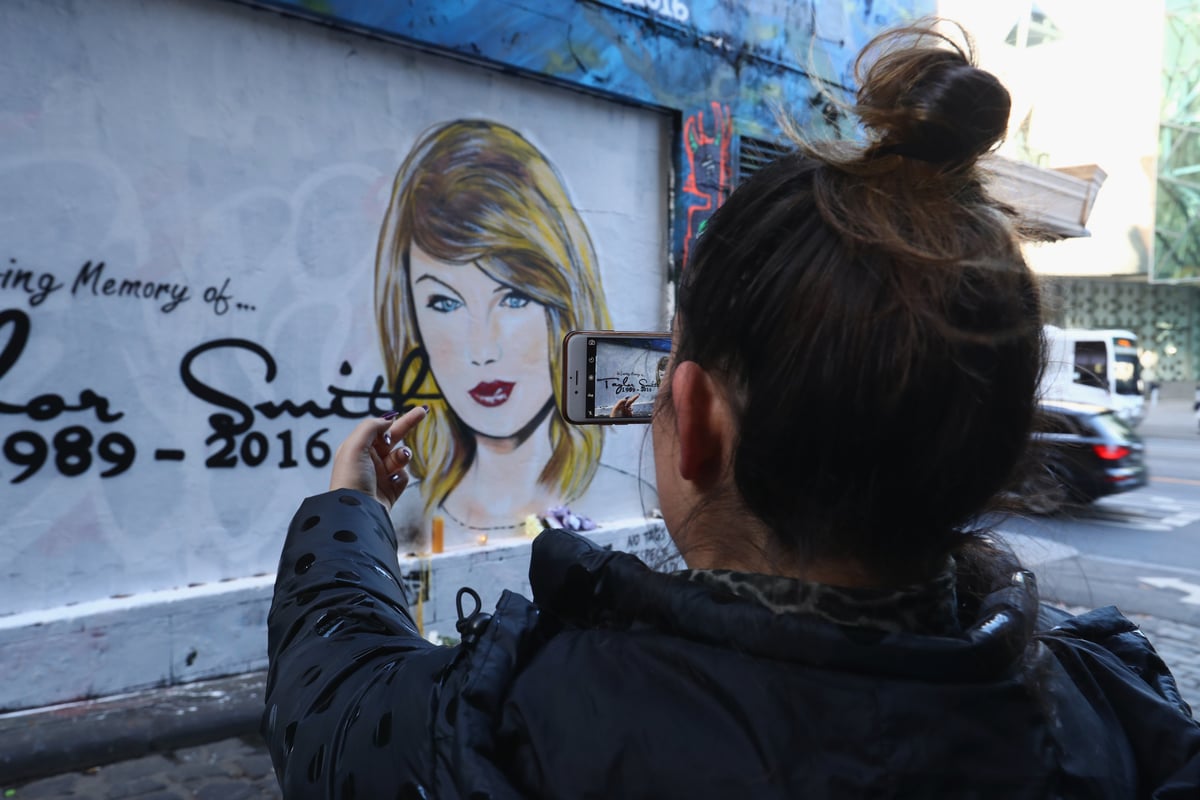 The mural, which was painted in Melbourne. Image: Getty.

Swift had been riding a wave of incredible public opinion off the back of her 2014 album 1989. She was everywhere. Inescapable. For anyone semi-famous, she'd become the person to hang out with. This was the time of the 'squad', before that too was deemed another reason to dislike her.

But as any Very Famous Woman can tell you, there's a real risk when you reach these dazzling heights.

With all of this going on, Swift retreated. She was barely seen for an entire year, and in that time privately began seeing Alwyn.

The couple kept their relationship under wraps for eight months before it finally leaked to the press in May 2017.

This was confirmed when Swift released a selection of diary entries with her 2019 album Lover.

"I'm essentially based in London, hiding out trying to protect us from the nasty world that just wants to ruin things," she wrote in an entry from January 2017. "We have been together, and no one has found out for three months now."

Swift famously shunned all media opportunities to promote her 2017 album reputation, which documented her turbulent 2016, but songs on the album gave fans their first real insight into the relationship.

Two years after they met, they went Instagram officially. Sort of.

In matching posts on May 8, 2018, they both shared photos of themselves standing next to a giant cactus. Alwyn also switched his previously private account to public.

In their almost six years together, the times they have spoken about each other publicly are few and far between. When they do, it's usually just to reiterate why they don't.

"I'm aware people want to know about that side of things," Alwyn said in a 2018 interview with British Vogue. "I think we have been successfully very private, and that has now sunk in for people… but I really prefer to talk about work."

In August 2019, Swift started doing media again around the release of Lover, and said she didn't want her personal life to be up for discussion in the same way it had been in the past.

"I've learned that if I do [talk about it], people think it's up for discussion, and our relationship isn't up for discussion," she told The Guardian. "If you and I were having a glass of wine right now, we'd be talking about it — but it's just that it goes out into the world.

The pair regularly attend the same industry events, are seen dancing at after parties and are on occasion captured by paparazzi around New York, but they have never walked a red carpet or made an 'official' public outing. 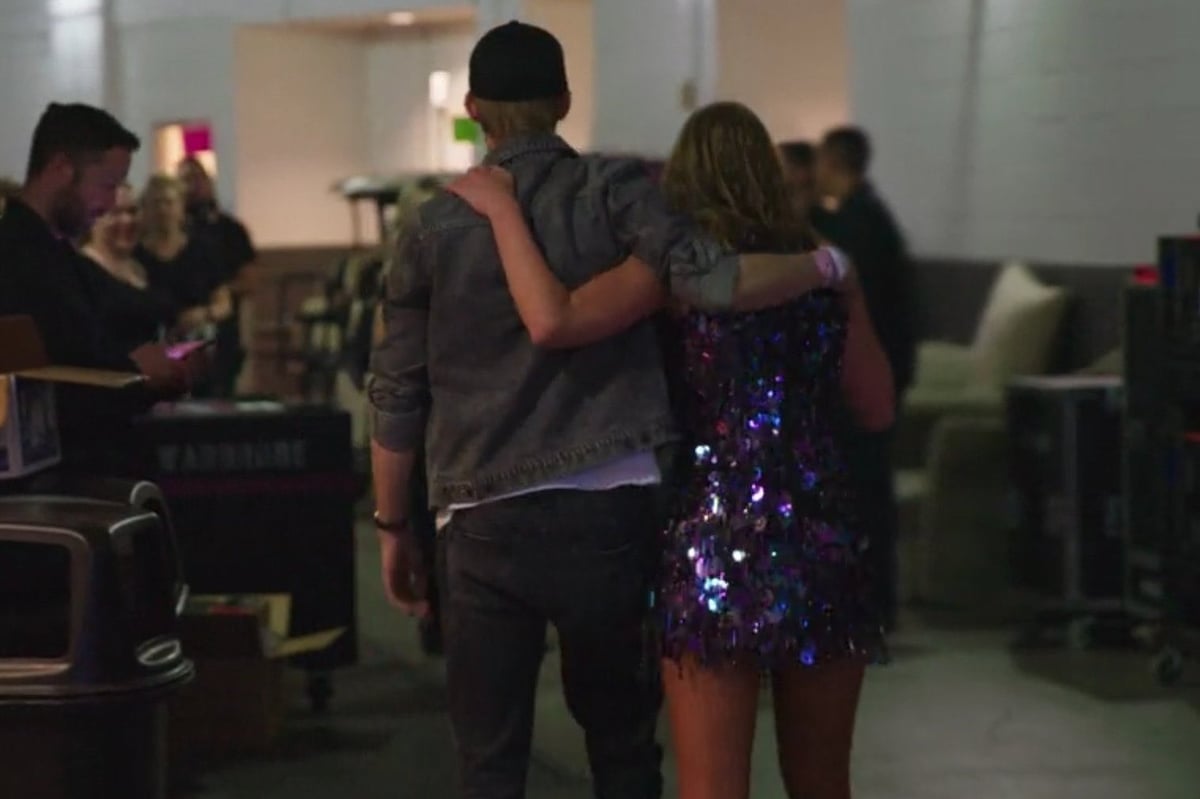 Six months later, Swift surprise dropped her first pandemic album, folklore. After Swift listed "William Bowery" as a collaborator in an Instagram post, internet sleuths quickly realised that there was no registered songwriter or producer under that name (Swift fans' detective skills are terrifyingly good).

They quickly came to the conclusion that it was Alwyn working under a pseudonym, which has been confirmed by both Swift and Alwyn.

"We chose to do it so the people first and foremost would listen to the music before dissecting the fact that we did it together. We did it under the name William Bowery. Very fancy. It sounds like a kind of Agatha Christie character that should be wearing a monocle with a big moustache," Alwyn explained to Kelly Clarkson in 2022.

He was later added as a co-producer on six tracks, earning him a Grammy as part of folklore's Album of the Year win.

"Joe is the first person that I play every single song that I write, and I had the best time writing songs with you in quarantine," Swift said during her acceptance speech.

In conversation with the Beatles legend, she shared how "scary" it was to fall in love with someone who has a "very grounded, normal way of living" compared to the exposure and attention she faces.

"I, oftentimes, in my anxieties, can control how I am as a person and how normal I act and rationalise things, but I cannot control if there are 20 photographers outside in the bushes and what they do and if they follow our car and if they interrupt our lives," Swift shared.

"I can't control if there's going to be a fake weird headline about us in the news tomorrow."

Alwyn "absolutely" understands and sympathises with the unusual circumstances, she said.

"But I think that in knowing him and being in the relationship I am in now, I have definitely made decisions that have made my life feel more like a real life and less like just a storyline to be commented on in tabloids."

Despite her best attempts, it's hard to stop your life being treated as a storyline when you are as famous as Swift.

For years, tabloids and gossip mags have been speculating about whether she and Alwyn are engaged, or possibly even married.

Anyone with any sort of Swift knowledge knows she'd never tell us, unless she drops it as a truth bomb in a future song. Anyone who's learned anything about Alwyn in recent years knows he won't be telling us either. 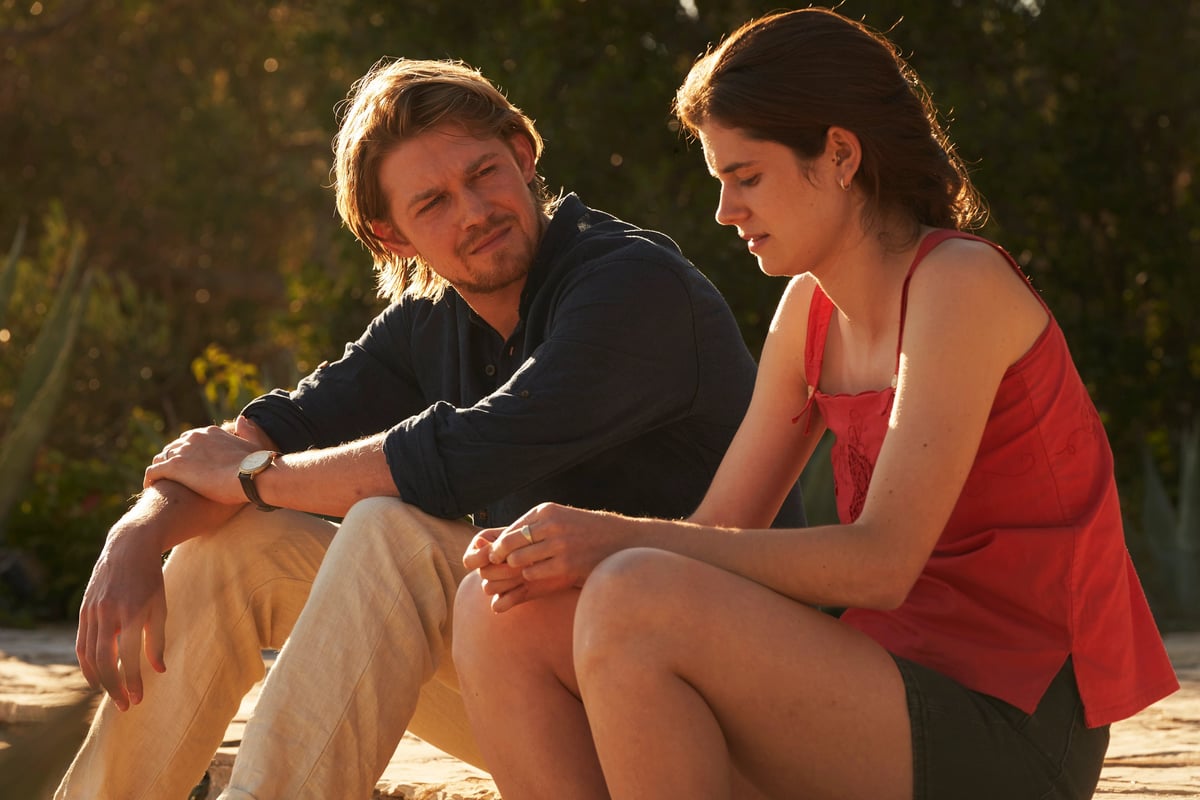 Throughout 2022, Alwyn has been undertaking a press tour unlike anything he's ever done before, for Conversations With Friends, diligently dodging questions about his relationship and grimacing his way through the ones he can't walk away from.

In a profile for the Wall Street Journal, he was asked about the rumoured engagement.

Alwyn is aware this puts him between a rock and a hard place.

There's an inherent interest in him as a person because of who he is dating. He doesn't want to talk about who he is dating, so he comes across as guarded in interviews. Therefore, he also gives away little of his own personality, which means that there continues to be little else for people to be interested in about him than his girlfriend.

"I don't know how best to talk about it. I mean, I'm aware of people's... of that size of interest, and that world existing. It's just not something I particularly care about, or have much interest in feeding, I guess, because the more it's fed, the more you are opening a gate for intrusion," he told The Guardian. 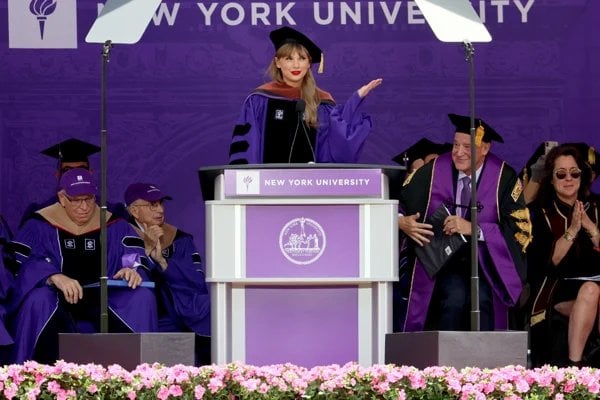 In May 2022, Swift gave a commencement speech at the New York University graduation ceremony, and in part spoke about how growing up so publicly taught her to value her privacy with Alwyn.

"Having the world treat my love life like a spectator sport in which I lose every single game was not a great way to date in my teens and twenties, but it taught me to protect my private life fiercely," she reflected.

"Being publicly humiliated over and over again at a young age was excruciatingly painful, but it forced me to devalue the ridiculous notion of minute by minute, ever fluctuating social relevance and likability."

And really, that is all we know about their relationship. If the past six years have taught us anything, it's that's the way Swift and Alwyn want it to be.

Luckily for us all, it has spawned some bangers along the way.

Reply
Upvote
I can believe I'm thinking more about this article - but there is something very mature about not needing to draw  attention to your relationship.
K
katp 2 months ago