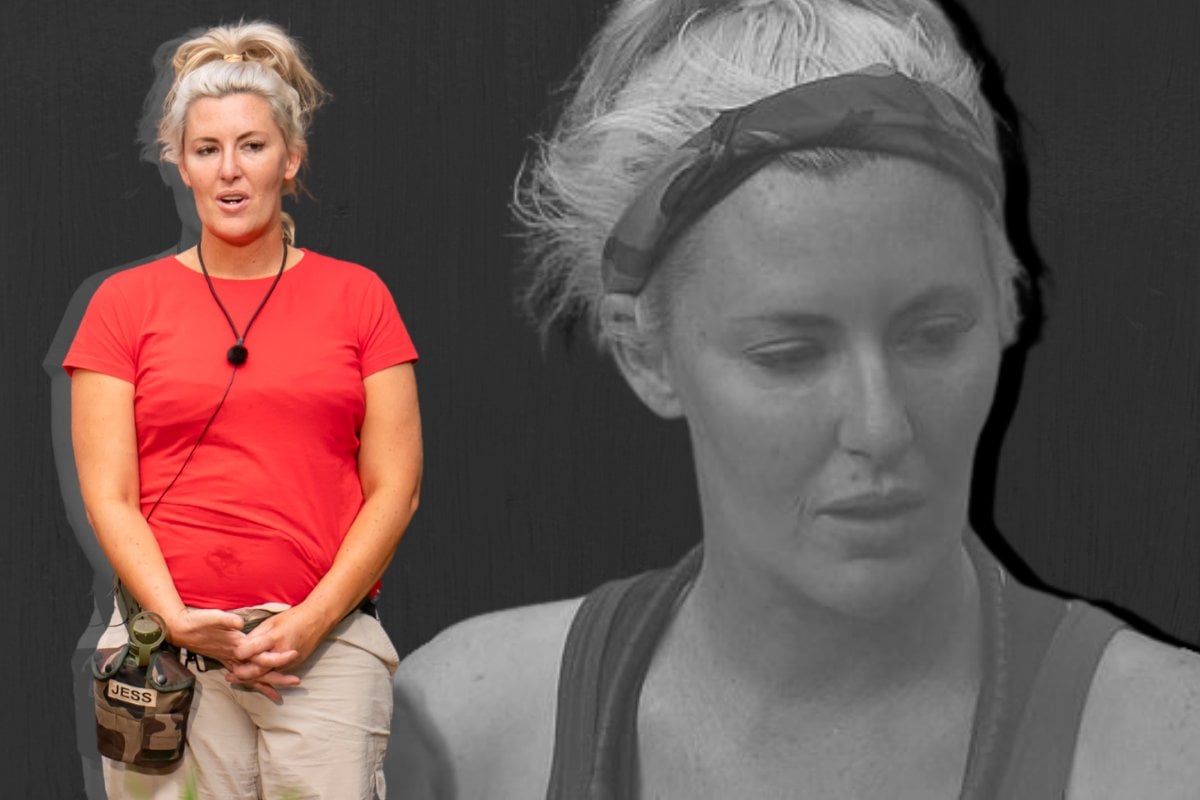 While we usually turn to reality TV for a bit of a binge-worthy escape, to zone out and laugh along at the nonsense unfolding on our screens, sometimes - and just sometimes - a conversation occurs on reality TV that we actually really need to hear.

And that just happened on I’m A Celebrity… Get Me Out Of Here!

Have a listen to Mamamia's entertainment podcast, The Spill, where hosts Laura and Kee discuss the biggest celebrity moments of 2020. Post continues after podcast.

The show, that usually is just about throwing spiders, snakes and cockroaches on helpless celebrities, has already conjured up one important debate - where Abbie Chatfield raised a hell of a good argument against AFL legend Dipper when he told her “you’re not going out like that”.

(For more on that chat, have a read of our article on it here: Why everyone's talking about Abbie Chatfield's body, again.)

But now the show is tackling a new topic: Postnatal depression.

It’s a condition, sometimes labelled as ‘baby blues’, that up to 75 per cent of women deal with after giving birth. Which means it’s something that we should definitely talk about a lot, right?

There is still so much shame, embarrassment and guilt surrounding the topic, with parents absorbing responsibility rather than processing it as what it is: A mental health condition that is so often out of our hands.

Which is why when Jess Eva candidly dropped into conversation around the campfire that she had postnatal depression for a whole year after giving birth to her first son, Fred, we were stunned, impressed and needed to hear her story.

Here’s how the conversation went down - which stemmed from a conversation about ‘poo duties’ as a parent. Obviously.

Abbie Chatfield: Were you on pure poo duties, or does Norm [Jess’ partner] do poo as well?

Abbie Chatfield: That must have been awful?

Jess Eva: Yeah, it was awful. Really bad. But I’m glad I got out of it. Some women never get out of it.

During a diary cam, she honestly explained her stance, saying, “It’s easy to talk about now because I’m over it, but there’s such a stigma that people can’t talk about it”.

“I know that I was in a spot where I left Fred in his cot by himself and I rang Norm and I said, ‘I’m out of here’. That’s how quick it can happen.”

You can watch the whole conversation right here. Post continues after video.

Jess was quick to point out that postnatal depression can happen to anyone. Even those who seemingly are the jolliest in their group. “Like I’m full of beans, but at that time I definitely wasn’t,” Jess explains.

When asked how she got out of that stage by Toni Pearen - which is a question asked by everyone as everybody wants to know how women manage to scramble out of that headspace. And while there’s not a set formula that works for every mother, this is how Jess found her way out.

“I got on some antidepressants and I saw a councillor.”

“For seven days, every time you entertain a negative thought you just have to dismiss it. Dismiss it. No matter how much it comes up. A thousand times a day? ‘Jess you’re terrible’ you have to say ‘that’s not right’. And then you physically start creating new neurological pathways. And it saved me.”

“You’ve got to talk about it. It’s not the elephant in the room. It is the room! If you’ve got a room full of women that have had kids, chances are probably 80 per cent have experienced postnatal depression. But we’re all too embarrassed to talk about it because they think it’s some kind of failure on their parenthood, and that’s just not the case.”

Since I’m A Celeb aired, Jess took to her own Instagram to continue the conversation,

“Don’t put yourself last, you deserve happiness and fulfilment just as much as your children. You deserve to enjoy your children rather than fighting a silent battle. You might think it’s your environment or lack of sleep. You might be totally f**king confused about who you are. Because you’ve always been you but now you are also a mum so what does that mean? Can you still go to the pub? Will someone judge you?”

“You might feel guilt because you have finished paid work and you are about to enter a 24/7 thankless pay-less workday called parenthood. PLEASE UNDERSTAND: Your happiness and sense of worth is worth fighting for. Your narrative of yourself may have changed but you are still spectacular! Don’t ever give up on you!”

As I’m A Celebrity was pre-recorded in the Aussie Bush this year, Jess is now back at home with her two children Fred and Matilda and her partner Norm.

But if there’s one takeaway we think she wants other mums out there to know, it’s this:

“It gets better, I promise.”