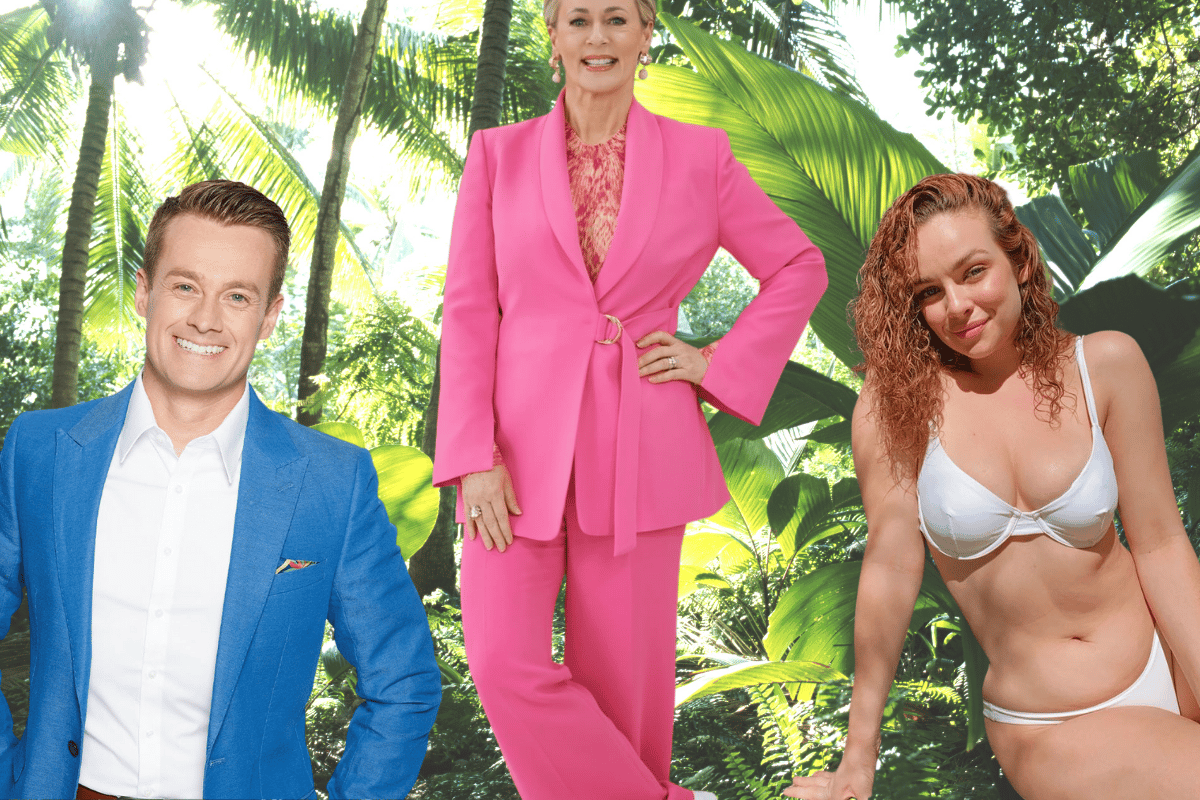 I’m a Celebrity…Get Me Out of Here! is finally returning to our screens tonight. And we can. not. wait.

The new season will see a new batch of celebs put their reputation and personal hygiene on the line as they take part in disgusting food challenges and terrifying trials all for our entertainment. Fun.

Only this time around, thanks to COVID-19, the show will be held in the Aussie bush rather than the South African jungle... which honestly sounds just as terrifying.

Watch the trailer for the new season of I’m a Celebrity… Get Me Out of Here! Post continues below.

For the past month, Channel 10 have dropped subtle hints about each of this year's contestants. And after some very serious research (read: scrolling through Instagram and Wikipedia) we think we worked out quite a few of them.

Some of our guesses were also confirmed when TV Blackbox seemingly leaked the list of contestants in December.

According to the industry publication, the unlucky celebs heading into the jungle include:

Now, ahead of tonight's premiere, Channel 10 have confirmed the first two celebs officially heading into the jungle.

In a post shared on Instagram earlier today, the network announced comedian Mel Buttle and singer-actress Toni Pearen (who we correctly guessed) will be joining the rest of the unknown cast.

As for who the rest of the celebs will be, we think we have a pretty good idea.

Here's our gusses for this year's I’m a Celebrity… Get Me Out of Here! contestants.

Clue: "A renowned chef is heading into the Aussie jungle. And we can’t wait to feed him critters."

We know celebrity chef Pete Evans won't be appearing on the show after Channel 10 confirmed the news in November.

According to Rob McKnight of TV Blackbox, who spoke with Nova's Fitzy & Wippa, Evans was "dumped" whilst in lockdown, about to enter the jungle.

"At 6:30 am the call came through from [Channel 10 executive] Bev McGarvie to ITV the production house. She said, 'he’s out, do not let him go into the jungle'. He is now packing up his bags and returning to Byron Bay and he is apparently furious".

After the announcement, "impeccable sources" told The Australian that Evans would be replaced by none other than his former My Kitchen Rules co-star Colin Fassnidge.

TV Blackbox have also listed the chef as one of the contestants heading into the jungle.

Clue: "A true diva is heading into the Aussie jungle. You'd think she'd be okay with spiders but we'll see."

It didn't take long for fans to work out this clue. A number of people have commented on Instagram suggesting the "true diva" is Paulini Curuenavuli, who just so happened to be the Spider on The Masked Singer in 2019.

As an extra little side note, an inside source told the Daily Mail last month that the 38-year-old was seen entering the campsite. According to the publication, the former Australian Idol star was made to sky dive into Clarrie Hall Dam, along with Australia’s Got Talent contestant Jack Vidgen (but more on him later).

TV Blackbox have also named Paulini as one of this year's contestants.

Clue: "A double act is heading into the Aussie jungle. This opinionated twosome is used to dishing it out... but now the shoe is on the other foot."

We're going to be honest, this one had us stumped at first. Fans have guessed Googlebox stars, Adam and Symon or Lee and Keith, Hamish and Andy and Kyle and Jackie O.

But we're going to have to go with Adam and Symon who were named on TV Blackbox's list of contestants.

Clue: "This Brownlow medal winner may have what it takes to ace it on the footy field but will they make their mark on their new Aussie jungle home? Will they be crowned King of the Jungle or bomb out entirely."

Our guess: AFL fans will know the Brownlow medal has been awarded to the 'Fairest and Best' player since 1924... which doesn't exactly narrow it down. So far, fans have guessed Chris Judd, Mark Ricciuto and Shane Crawford, who appeared on I'm A Celeb in 2019.

But TV Blackbox have listed retired AFL player Robert 'Dippa' DiPierdomenico. And he certainly fits the bill. Robert won the Brownlow Medal in 1986 along with Greg Williams.

One of the biggest names in TV.

Clue: "One of the biggest names on Aussie TV is heading into the Aussie jungle. Pretty brave considering he's afraid of monsters."

Fans have pointed out that the clue could be referring to Family Feud host Grant Denyer. The 43-year-old, who was also named by TV Blackbox, was injured in a monster truck event in 2008.

Clue: "A very funny lady is heading into the Aussie jungle. This stand up is used to things heating up."

Our guess: Amanda Keller (we hope) and/or Mel Buttle (confirmed).

When we first read this clue, we originally thought Celeste Barber or TV or radio presenter Amanda Keller were heading into the jungle. According to TV Blackbox, Amanda and Grant Denyer were supposedly told they had to appear on I'm A Celebrity so they wouldn't lose their wage from Dancing With The Stars, which has now been picked up by Channel Seven.

But based off the cast announcement earlier today, it looks like comedian Mel Buttle could be the 'funny lady' that the jungle has been teasing. That said, we're not ready to let go of our theory that Amanda Keller is heading in too. So perhaps (fingers crossed) we'll be blessed with two funny gals.

Clue: "A reality star is heading into the Aussie jungle. One last pedicure before the claws come out."

At first, we had our suspicion the reality TV star was likely a Married At First Sight contestant. Why you ask? Well, if you looked closely at the trailer (above), you'll notice a shot of a bride walking down the aisle. The two clues may not be linked but as soon as we saw the wedding dress, that's where our reality-TV-obsessed brains went.

But then TV Blackbox named Real Housewives of Melbourne star Pettifleur Berenger, which also ties in nicely with our wedding dress theory. So we're running with it.

A comedian with anger management issues.

Clue: "A comedian is heading to the jungle. But when he was in the Hollywood jungle, he had anger management issues."

Just between us, we're quietly confident about this one.

Fans have pointed out the "anger management" clue could be a reference American actor Charlie Sheen who starred on the 2012 sitcom Anger Management. But we're thinking Mr Sheen probably comes with a big ol' price tag that Channel 10 may not be able to drop on one celebrity.

Then the genius people of the internet offered another suggestion, Aussie comedian Ash Williams, who was also named by TV Blackbox. A quick peek at his Linkedin profile will tell you that Ash also appeared in Anger Management. Coincidence? We think not.

Clue: "A great singer is heading into the Aussie jungle. He's sung on the world stage and now he'll be singing for his supper."

The caption also reads "He’s an idol to many, who has sung on the world stage, but does this Great Singer have the X factor to get him through the Aussie jungle?"

Right off the bat, it seems the clue is pointing to Aussie singer Guy Sebastian. The 39-year-old won Australian Idol back in 2003, has been a judge on The X Factor and "sung on the world stage" in Eurovision and World Idol.

But perhaps - and stay with us here - they're trying to throw us off the scent of another reality show singer. As we mentioned earlier, Jack Vidgen, who won Australia's Got Talent has been seen entering the campsite. Jack also competed on America's Got Talent: The Champions in 2020.

And just in case you need even more evidence, Jack was also included in the TV Blackbox list.

Clue: "A blonde bombshell is heading into the jungle. She loves playing the villain... but to many she's become a hero."

We're going to have to agree with TV Blackbox because this one has to be Abbie Chatfield, who was cast as the 'villain' on Matt Agnew's season of The Bachelor in 2019.

A star of the street: Toni Pearen (CONFIRMED).

Clue: "A star of the street is heading into the jungle. She's going to need all the soap she can get in there."

Thanks to TV Blackbox, we knew this celeb had to be Toni Pearen. Tying in with the clue, the actress and singer rose to fame on Aussie soap opera E Street in 1989.

Channel 10 have now officially confirmed Toni Pearen as one of this year's contestant.

Who do you think will appear on I’m a Celebrity? Let us know in the comments below.

P
purplepoison898 a year ago

Reply
Upvote
I'm guessing the AFL player will be Jimmy Bartel. He's the only winner in the last 10 years without media commitments or is still playing and after the mess he caused with Nadia, could be looking to repair his public image.
M
mamamia-user-482898552 a year ago