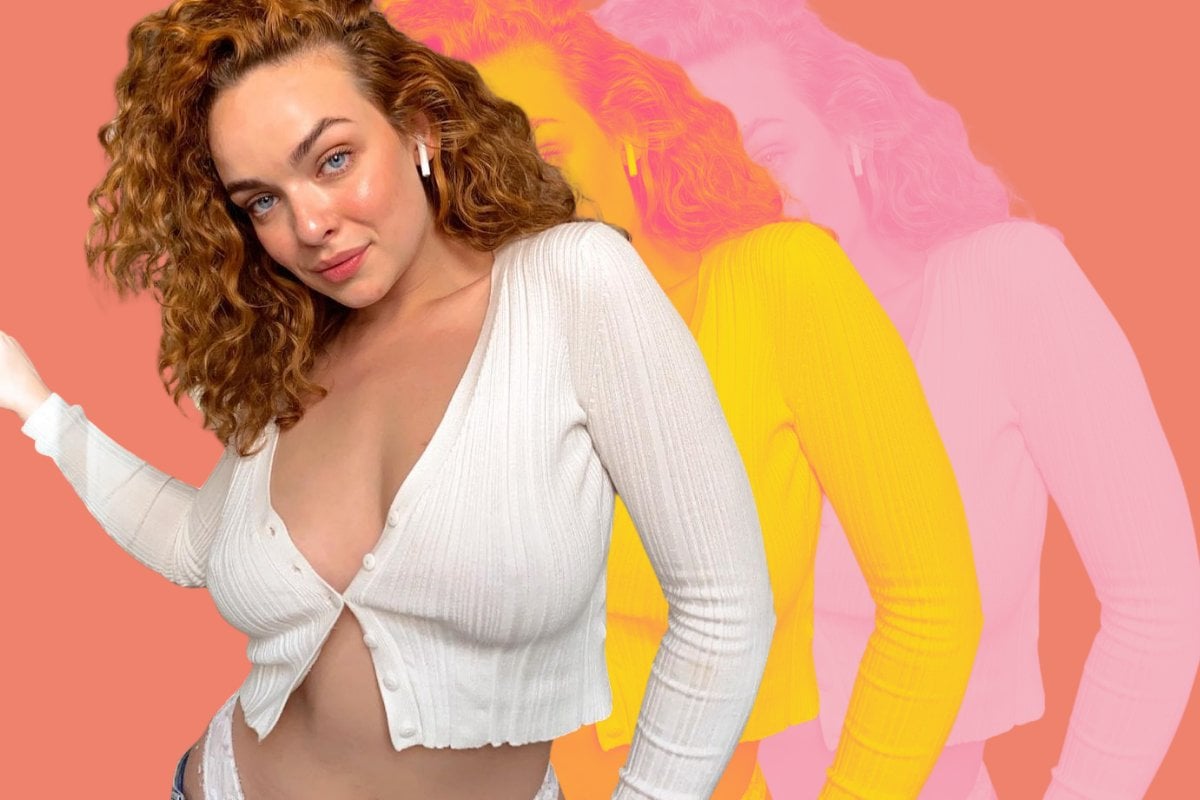 In case you missed it, Abbie Chatfield is in the I’m A Celebrity… Get Me Out Of Here! jungle. And that means that her brilliant knack for calling out foul play has relocated from Instagram to deep within the Aussie bush.

While Abbie has shown camaraderie with her fellow campmates, there was a certain comment from Dipper (AKA Robert DiPierdomenico, a retired AFL player) that sparked a conversation we’ve all had before.

Here’s exactly how the moment between Dipper and Abbie went down. (Just a visual note for the readers, Abbie was wearing her gorgeous bikini at the time that Dipper piped up.)

Abbie: “Dipper, what does that joke mean?”

Dipper: “When a father sees his daughter, you know, grow up. And she’s going out to see her boyfriend or whatever, and walks out with a mini skirt sort of thing.”

Abbie: “Protective of what?”

Dipper: “Of you girls being hurt. Of you young ladies being hurt, when you go out like that?”

Abbie: “But why is that determined by what we wear?”

Dipper: “Well, it’s like you’re, err, seeking attention. And asking for… you know.”

Abbie: “Asking for what?”

Dipper: “Oh don’t get into a difficult conversation.”

Dipper: “It’s probably the wrong explanation for it. It’s just that the father’s sort of make sure that his girls feel safe out there.”

Abbie: “Cos you’re asking for it?”

Abbie: *Shakes her head and walks off.*

If you, like Abbie, are shaking your head in disappointment too, then we feel you.

It seems that the ‘fatherly’ defence simply no longer flies. And that’s probably because we’re all jaded by the broken-record excuse of ‘as a father of daughters’ or ‘I have sisters’ swiftly followed by a misogynist comment or sexist behaviour.

We’ve all had uncomfortable conversations with family members where a blatant double standard is at play. Where a judgement rained down on a girl due to their appearance whilst a boy skates by without being hassled with criticism.

And we’d be lying if we said it wasn’t always older men - because it is. But does that warrant a get out of jail free card?

We get that times have changed and those in generations above might not have caught up with everything quite yet, so perhaps we need to give a little leeway. But that doesn’t mean we’re not going to have a conversation.

Abbie was calm, eloquent and constructive in her responses to Dipper - politely asking if he would ask the same question of a man.

This was the point where Dipper faltered slightly. And it’s where most men do.

You see, we think that one of the best ways to change the mind of a misogynist (whether they believe they’re one or not) is to flip the scenario back on them.

This switch of the power dynamic, allowing the misogynist to feel - just for a second - what it might be like to be on the other side is groundbreaking. And it’s how, so often, a genuine change of thought occurs.

The response to the episode airing Abbie shared a clip of the interaction on her Instagram - allowing us all to continue in this immensely important conversation.

“Women are told to cover up, or risk being accused of asking for it. What “it” is may range from attention to sexual assault. We are told alter our behaviour because men are dangerous. The notion that comments like this exist because men are ‘protecting’ us is, put bluntly, fucking bulls**t.”

“Whether I was in bikinis, my camp gear or running around naked, a comment on what I’m wearing is never warranted. @ashwilliams1 barely has his shirt on (joyous vibes for me), and nothing is mentioned. Twitter is going off about how much they love him for le rig, but each pool scene is met with people telling me to put my tits away.”

Within the clip shared, Dipper explains that Abbie understands that there’s a “generation gap” and that his understanding of being ‘protective’ is learnt behaviour from his father’s actions and that he doesn’t want to “be offensive”.

However, in Abbie’s caption, she simply states: “I also don’t think a generation gap is a fair excuse.”

And we’re right with you Abbie. Thank you for having these conversations on national television so women and girls have a script of what to do, say and how to react when they are met with these comments.

Because, if we’re honest with ourselves, they will have to deal with them. Unfortunately.

For now, we’re happy to report that an apology has been issued from Camp Dipper, with the sports star taking to Twitter to say, “Abby [sic] is an absolute force of nature. I shouldn't have said what I said in camp. I am glad we had the chance to discuss it. It was a learning moment and i am glad we could ‘TWERK it all out in the end’.”

Highlighting that the two patched things up over learning the WAP dance together.

Abby is an absolute force of nature. I shouldn't have said what I said in camp. I am glad we had the chance to discuss it. It was a learning moment and i am glad we could "TWERK it all out in the end" https://t.co/IfMTApbunY

...So we guess if the whole ‘putting them in your shoes’ strategy doesn’t work, then you can always whip out WAP.

S
shadie3 a year ago

Reply
Upvote
I loved this interaction so much. I love the conversation its started in homes with young teenagers of all genders. Abbie is an intelligent, sassy and vibrant young woman.

While I don't think anyone is mad at Dipper, in this situation he represents a majority that still believes this sentiment and it's time we stand up and say enough is enough.
S
sexysharya6 a year ago